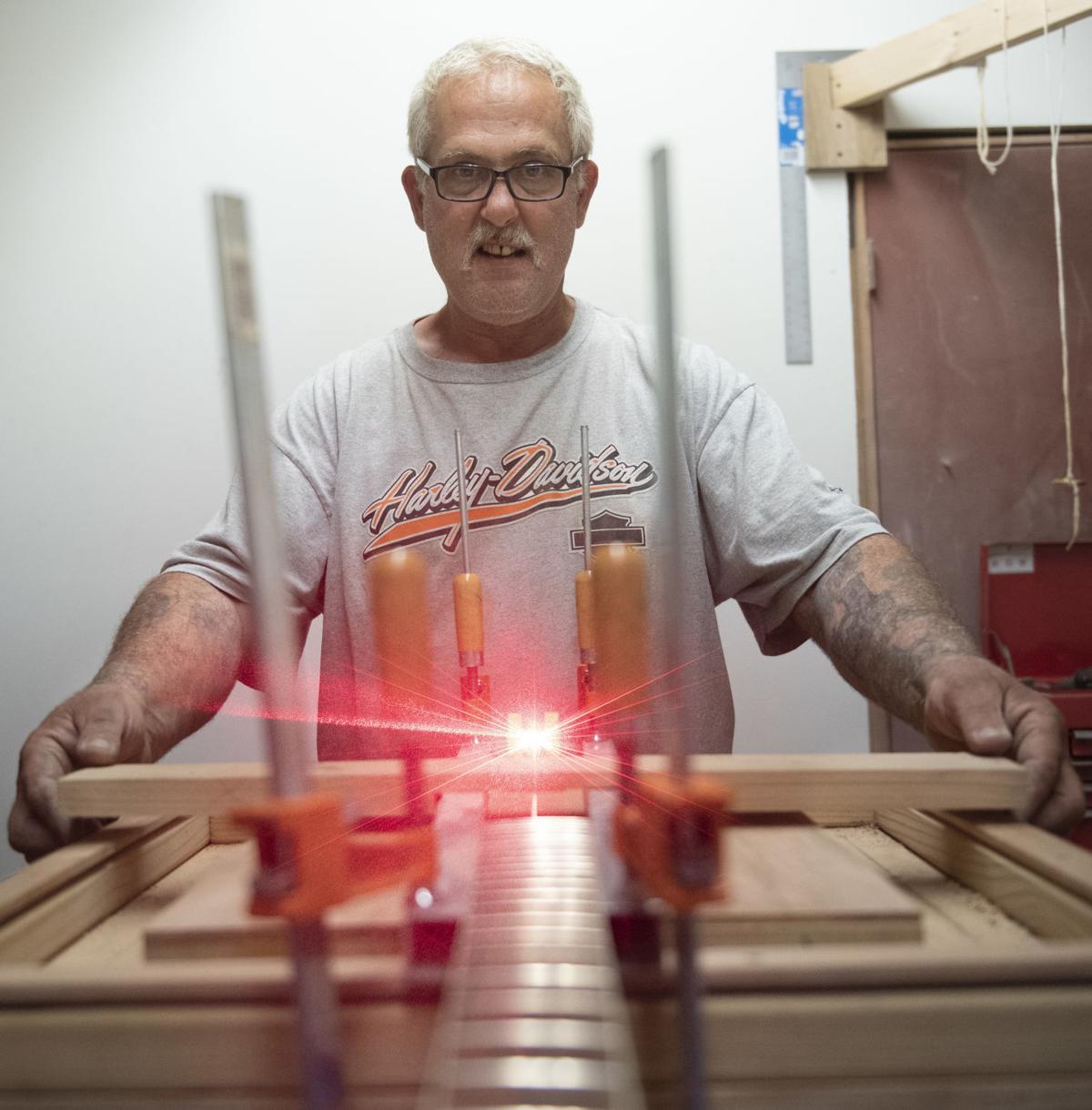 Jim Chamblee uses a laser to assure the neck of a guitar is aligned to the body of a custom-made guitar at Carroll Creek Guitars in Frederick. 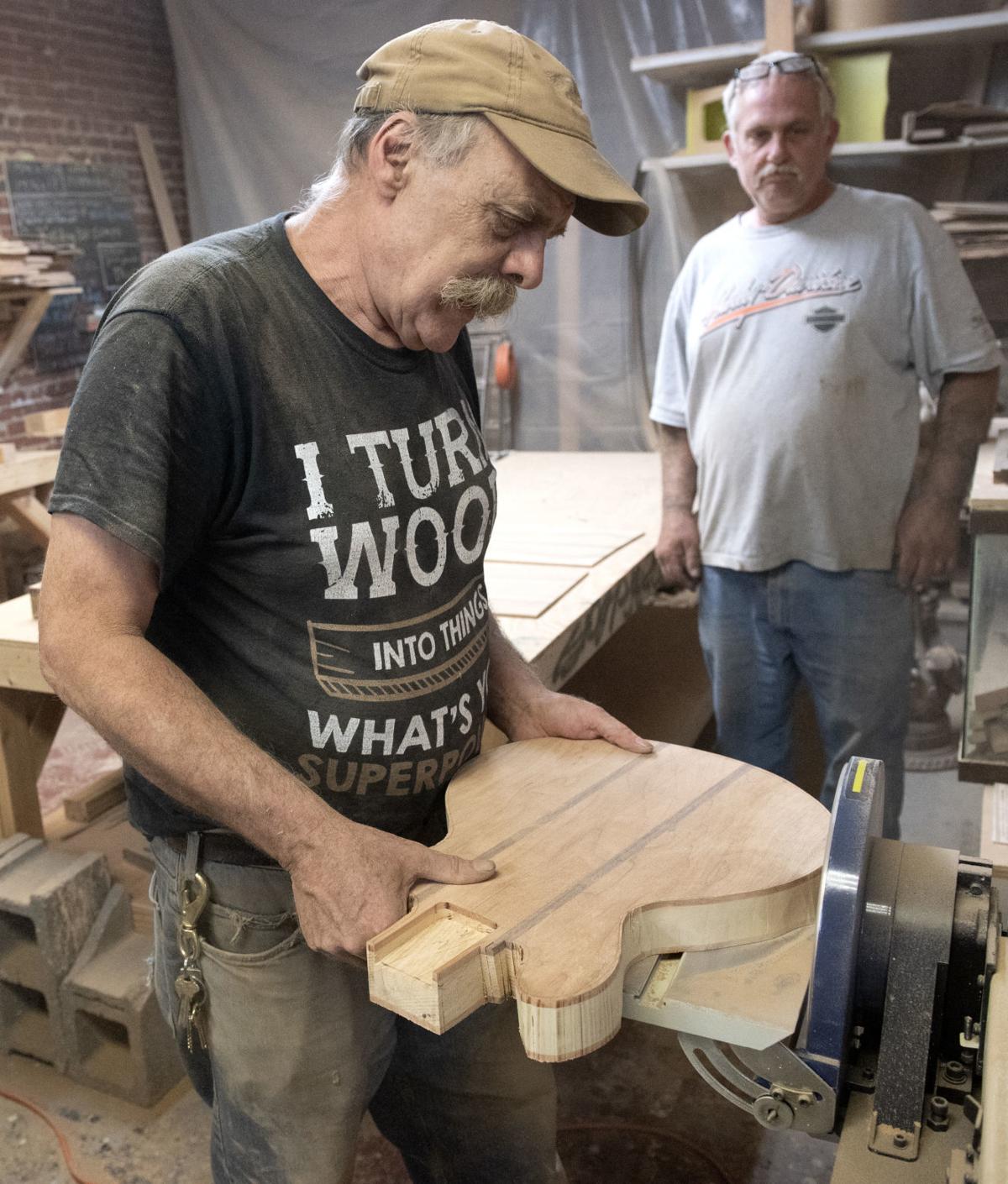 Jeffrey Miller smooths the body of a custom guitar with a sander in the workshop of Carroll Creek Guitars on S. Carroll Street in Frederick. At right is his business partner, Jim Chamblee, who completes the electrical work on the guitars. 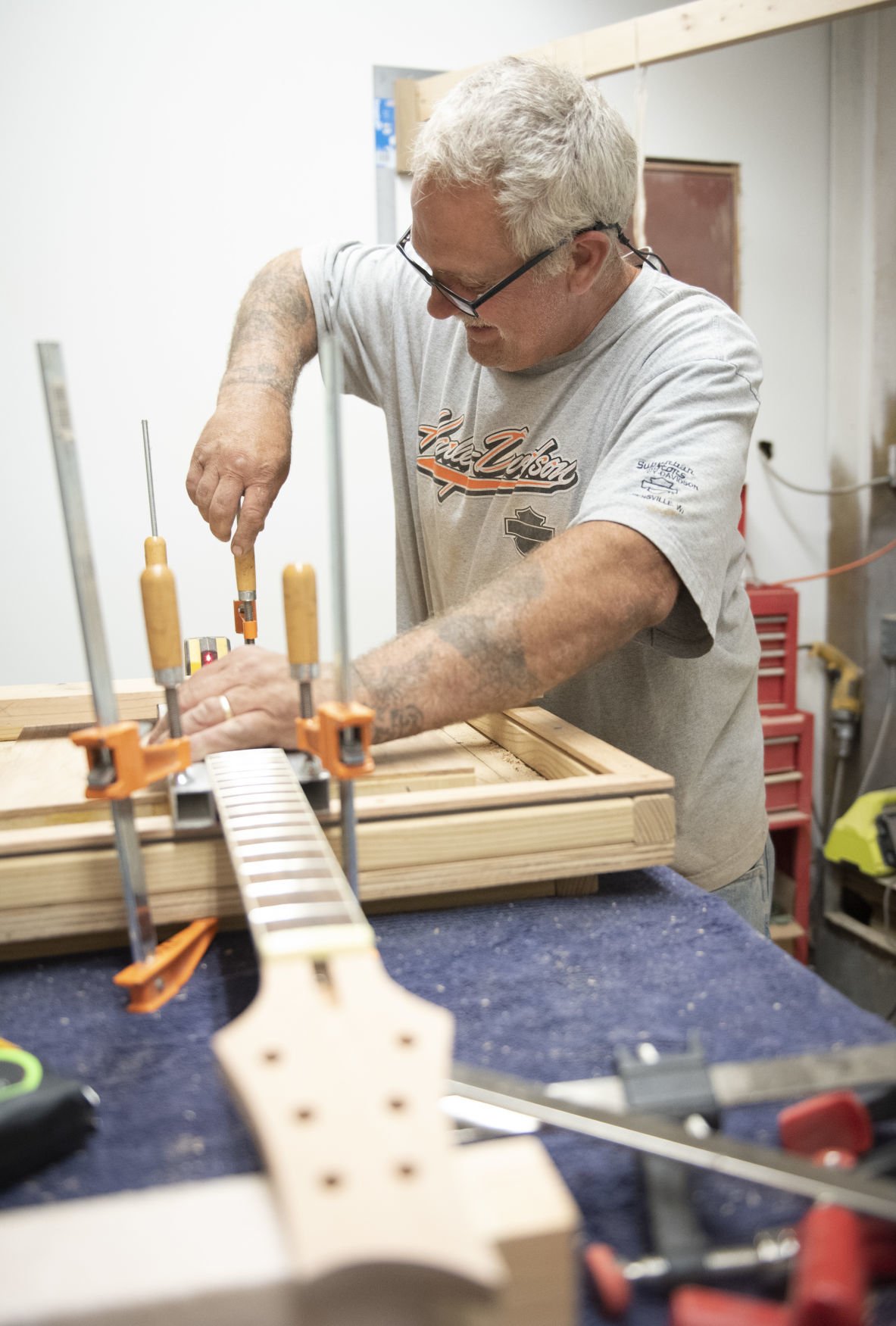 Jim Chamblee, owner of Carroll Creek Guitars, works to affix the neck of a guitar to the body in his downtown Frederick workshop. 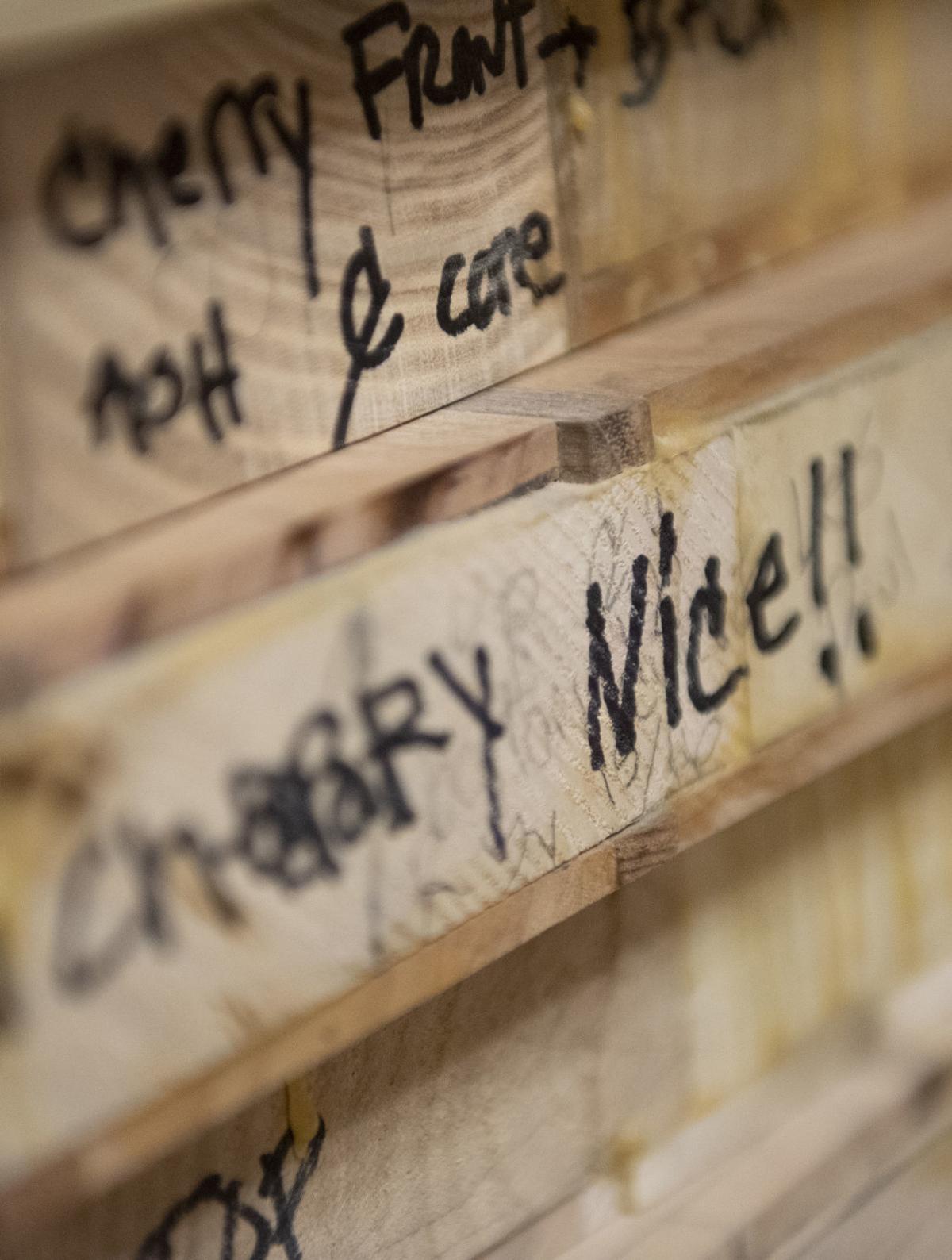 Handwritten notes adorn pieces of wood waiting to be cut and assembled into guitars at Carroll Creek Guitars in downtown Frederick. 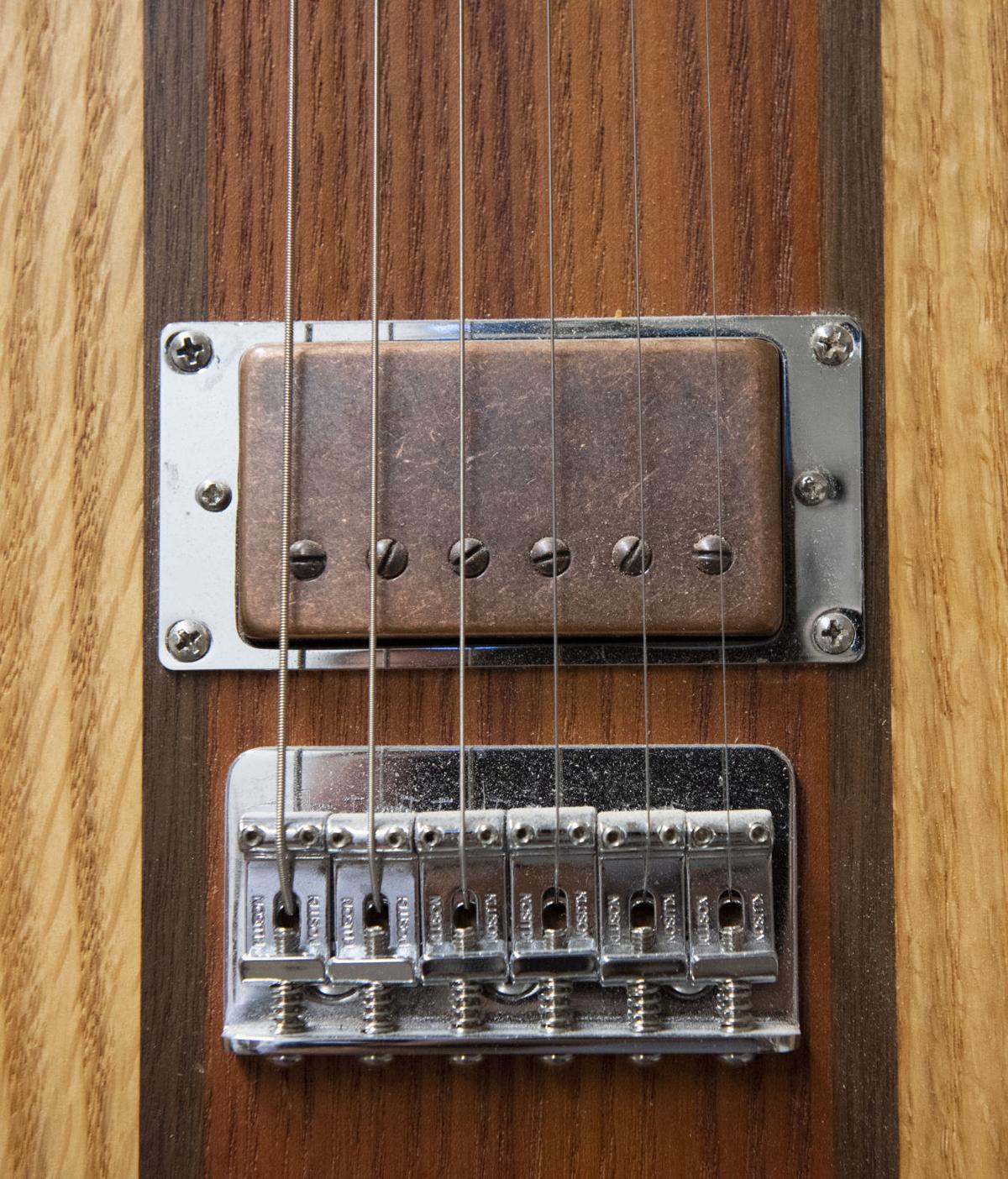 One of the finished guitars from Carroll Creek Guitars, which uses wood from the surrounding area. 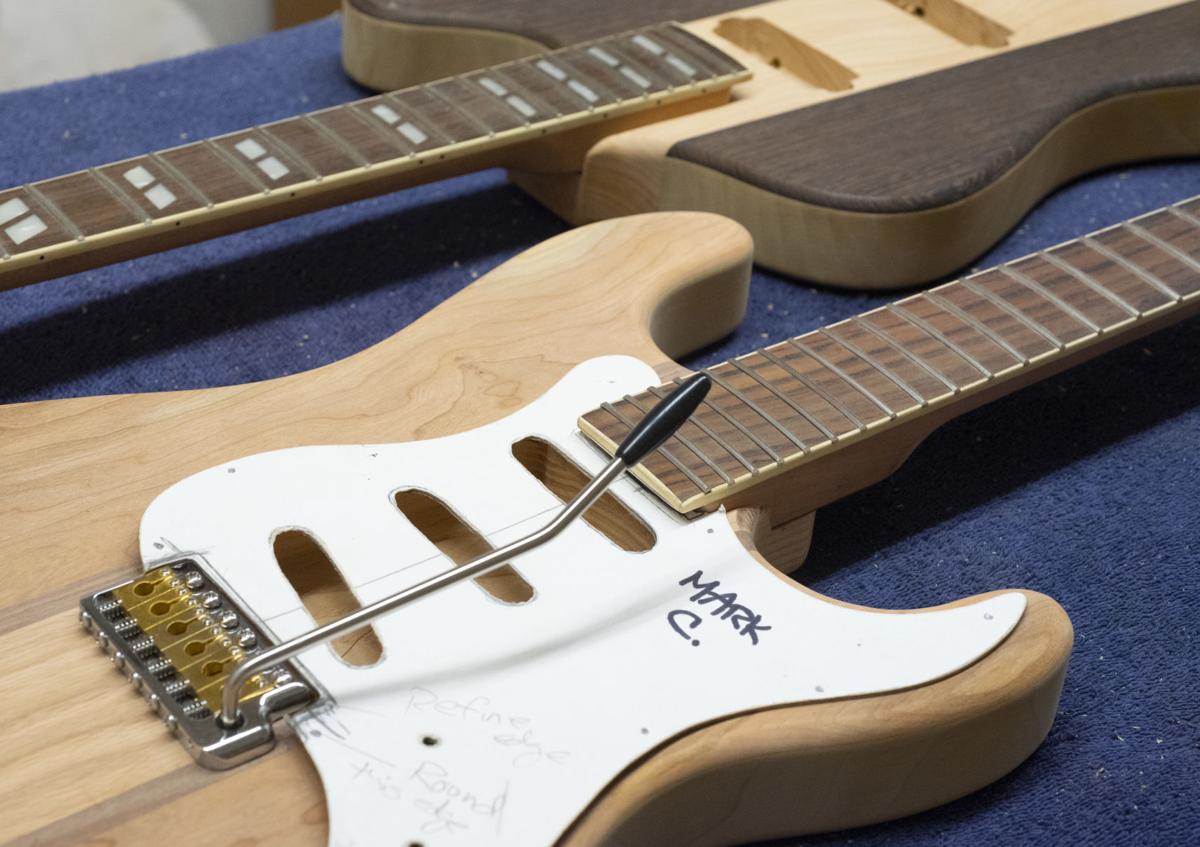 Carroll Creek Guitars creates guitars that feature the natural wood finish on the body of the instrument. 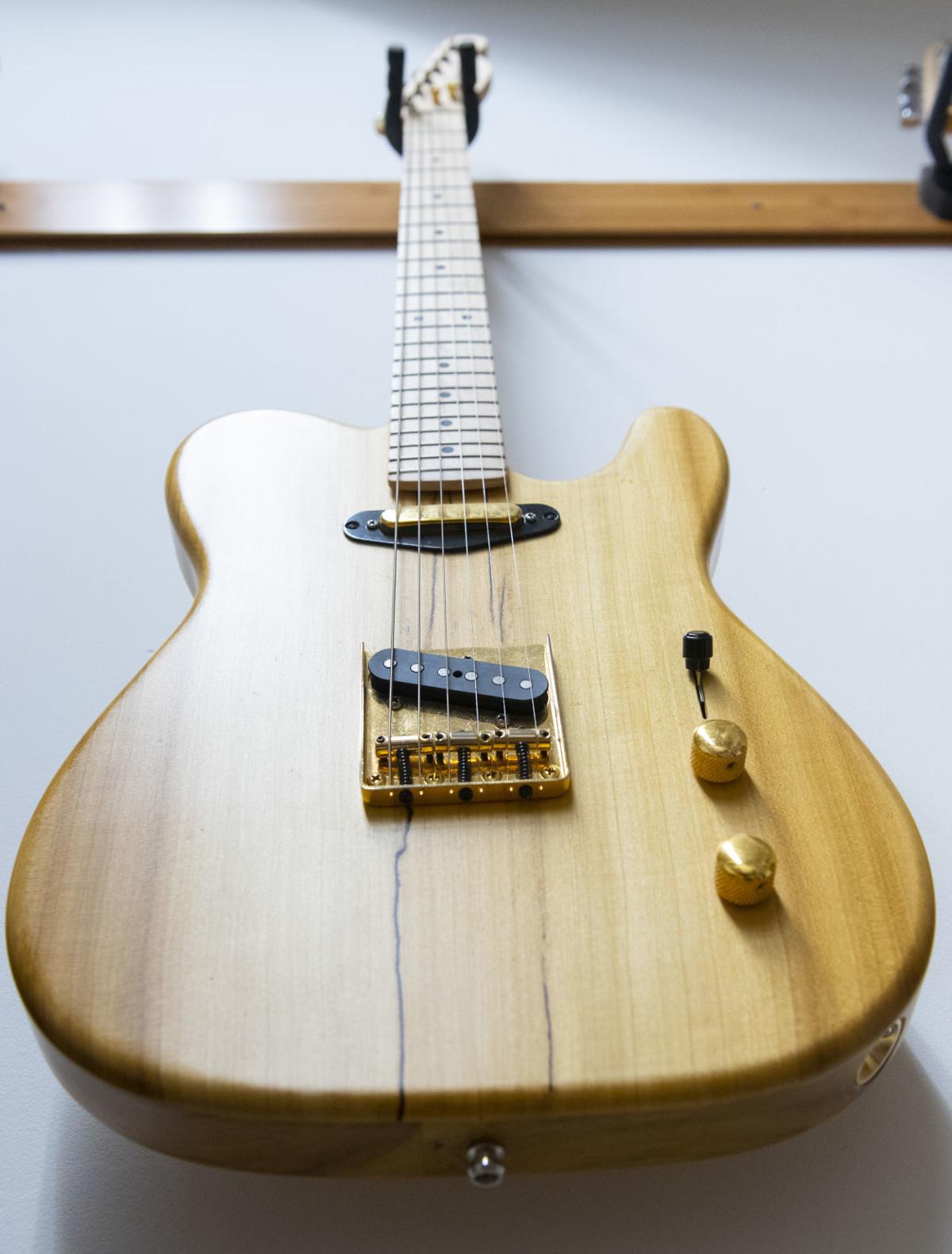 One of the finished instruments from Carroll Creek Guitars in downtown Frederick.

Jim Chamblee uses a laser to assure the neck of a guitar is aligned to the body of a custom-made guitar at Carroll Creek Guitars in Frederick.

Jeffrey Miller smooths the body of a custom guitar with a sander in the workshop of Carroll Creek Guitars on S. Carroll Street in Frederick. At right is his business partner, Jim Chamblee, who completes the electrical work on the guitars.

Jim Chamblee, owner of Carroll Creek Guitars, works to affix the neck of a guitar to the body in his downtown Frederick workshop.

Handwritten notes adorn pieces of wood waiting to be cut and assembled into guitars at Carroll Creek Guitars in downtown Frederick.

One of the finished guitars from Carroll Creek Guitars, which uses wood from the surrounding area.

Carroll Creek Guitars creates guitars that feature the natural wood finish on the body of the instrument.

One of the finished instruments from Carroll Creek Guitars in downtown Frederick.

Jim Chamblee and Jeffrey Miller are as different as their smokes: Marlboros for Jim, a pipe for Jeff (a sight to see with smoke swirling underneath his great, gray mustache).

Still, there are more similarities than differences. Their fashion skews grandpop with slightly different interpretations. Jim, faded tattoos swirling across his arms, frequently dons Harley-Davidson tee-shirts (motorcycles are another interest), while Jeff’s shirts speak more explicitly to the passions of the man wearing them.

“I Turn Wood Into Things — What’s Your Superpower?” his tee-shirt proclaimed proudly one morning at their workshop on Carroll Street. Sure, it’s on the nose, but that’s what Jeff does, and it’s what Jim does: turn wood into things. Specifically, guitars. Electric guitars.

Electric guitars with no paint or coating. Electric guitars made striking simply through their utter lack of bells, whistles or adornments. The wood itself sings, the whorls and spalding buffed to a dewy shine beneath gleaming metal strings. Showcasing that wood is an obsession, a focus. It’s what led one of their customers to scratch an inscription on the workshop wall with a square carpenter’s pencil: “Carroll Creek Guitars — where the wood rules.”

They’re the best guitars no one has ever heard of, and they’re right here in Frederick. Walking distance from Square Corner and Baker Park. Steve Kline, a guitarist from Montgomery County, was almost shocked when he stumbled across the workshop in the alley near McClintock Distilling, eclipsed by parking signs for the pet groomers next door.

“I was carrying my guitar case and I heard someone yell, ‘Hey, do you play that thing?’” Kline said.

He turned, and there was Jim, grinning from the door of the workshop.

Kline took out his guitar and played him a few notes. Jim liked what he heard (“He’s one of the best guitar players I’ve ever seen,” he confided later) so he invited Kline to tour the shop.

“He told me he made guitars across the alley,” Kline said, laughing over it still. “What guitar player could resist that?”

For decades — the majority of his 64 years, in fact — Jeff knew nothing about guitars. It’s the great irony of his friendship with Jim — who’s 59 — that the two started a business so stubbornly outside the realm of Jeff’s experience.

“Jim’s trying to get me to learn to play,” he said. “I have no interest in it. What I love is the mechanics. This stack of wood right here? That’s what I do.”

It’s what he was doing in the workshop for years after retiring from the construction industry. After three decades, his body was tired, aching. He knew construction was a younger man’s game. So, he rented a workshop space along Carroll Creek and put his fine arts degree to use. He was making frames — beautiful, ornate frames, Jim said — but for some reason, no one wanted to buy them.

“The business was always in the red,” Jeff said. “Always, always, always. And finally Jim comes up to me and goes, ‘Jeff, are you making any money on those picture frames?’ And my answer was, ‘Not really.’”

The two had been friends for years after meeting on a Credo weekend at the Centennial Memorial United Methodist Church on West 2nd Street (the multi-day ministries are essentially a crash course on the Gospel, Jim said). It was friendship at first sight, fueled by similar backgrounds. Jim grew up in Howard County and drove a rig for D.M. Bowman before he landed a maintenance job at the Skycroft Conference Center in Middletown. Jeff moved to Frederick from Pennsylvania in 1986 to work for a potter, falling back on construction to pay the bills.

And it was a meeting of two artistic souls, however abashed Jim becomes when Jeff praises his musicianship. He’s been playing guitar since the seventh grade, when he learned rockabilly on an old Yamaha acoustic. One of the first songs he ever memorized was “Hot Rod Lincoln” by Commander Cody and His Lost Planet Airmen, an old country-rock song imparted by a kid just a few grades older.

“He knew all those cool hillbilly songs back then,” Jim said. “All we did all year long in that music class was sit out in the hall with guitars and play hillbilly music.”

What most kids didn’t do was take the guitars apart. But Jim did. He’d buy old Fenders from pawn shops and reconstruct them, fiddling with the specs to make them louder, twangier, or sweeter. He learned the wiring down pat. The entirety of Jim’s “aw, shucks” demeanor falls away when he’s beadily eyeing a guitar, assessing the strings and the quality and the sound. You want a single-coil pickup with lipstick tube plating and a Gibson-style neck? Jim’s your guy. You want catalpa wood with a walnut pickguard? Go ask Jeff.

At first, he was reluctant to join Jim in his guitar-making venture.

“I think my exact response was, ‘I don’t even play guitar,’” Jeff said. “What do I know about making them?’”

So, Jeff thought about it in the workshop where he earned about 60 cents an hour making beautiful frames that nobody wanted to buy. It didn’t take long to sway his opinion.

It starts with the veneer, a quarter-inch thick on both sides over a core of solid ash. You know Willie Nelson, Jeff asked, who still plays an acoustic guitar — “Trigger” — with a gaping hole across the front? Yeah, that won’t happen with a Carroll Creek guitar. Jeff builds them to last.

And the instruments are designed to be eye-catching by sheer virtue of the wood itself. Jim and Jeff buy it by the truckload from Maryland Horse Fencing in Union Bridge, an agricultural contractor better-known for rails and fencing. But scouting on Craigslist one day, Jim came across a listing for ash lumber — one of the best woods for transferring sound.

“That’s how we got connected,” Jim said.

Now, the partners buy all their wood — almost all from the East Coast — from the business. There’s ash, sure, but they have more fun with the other woods. Poplar and cherry and walnut, catalpa and even wenge, an African hardwood left over from the framing business. One day, they got a shipment of sycamore that almost brought Jeff to his knees.

“It was a grain pattern that freaked me out the minute I saw it,” Jeff said.

The quarter-sawn plank had psychedelic swirls shining through the grain, a pattern that’s known, mostly by woodworkers, as flecking. There are planks of light poplar wood streaked with rippled dark lines, a form of discoloration called spalting. Jeff even keeps planks of flame-grained walnut, the undulating waves as clear and unpredictable as a flickering candle. The boards are stored in his favorite section of the workshop, a dusty room with planks marked by exclamatory notes in Sharpie. “Beautiful grain,” one reads. “Purple flame!” reads another.

That level of attention makes “paint” — to both men — a dirty word. They’ll apply stains or add a pickguard if a customer asks, yes. But the point of the guitars is letting the wood shine through. That, and Jim’s expertise. When Kline went into the shop, he decided to test him. He commissioned a guitar, but not just any guitar: a Fender Telecaster-style body with a whammy bar and 24 frets — two full octaves of notes.

“I mean, the 24 frets alone are almost impossible to find,” Kline said. “And then if you do, you can’t get a whammy bar on that body shape. I was a challenge to them.”

But they did it. Jeff shortened the body to make room for an elongated neck, necessary to accommodate the extra frets. Jim added a single-coil pickup for a thinner, clearer sound — the type of sound The Beach Boys used on their albums, Kline said. When he plucks a string, the note sustains for a good 20 seconds. The wood is black-spalded poplar, stained a bright cherry red, different from any guitar Kline ever owned before.

Uncapped: A look at what's on tap at local brew…

Restaurant family meals: a new trend of the pandemic

Three for the road