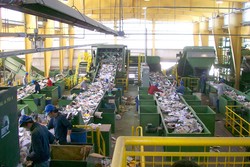 Eco-Cycle sorts items for recycling at its Boulder, Colo., site. Eco-Cycle opened in Boulder in 1976 as a place where newspapers, bottles and cans would be put to new uses. Frederick County is considering building a $350 million waste-to-energy plant, or incinerator, and officials toured the recycling plant recently to examine waste-reduction alternatives. 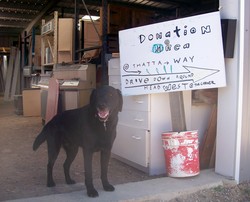 A dog stands at the Eco-Cycle site in Boulder, Colo.

Eco-Cycle sorts items for recycling at its Boulder, Colo., site. Eco-Cycle opened in Boulder in 1976 as a place where newspapers, bottles and cans would be put to new uses. Frederick County is considering building a $350 million waste-to-energy plant, or incinerator, and officials toured the recycling plant recently to examine waste-reduction alternatives.

A dog stands at the Eco-Cycle site in Boulder, Colo.

Frederick County Commissioners David Gray and Kai Hagen recounted their information-gathering trip to Boulder, Colo., last month in a PowerPoint presentation before the other three commissioners and the public Thursday.

The commissioners were in Colorado to learn about Boulder's aggressive recycling programs. Recycling is a way of life in Boulder, where recycling containers outnumber trash containers in most public places and where the residential recycling rate approaches 50 percent.

The commissioners hope to achieve a recycling goal of 60 percent within the next 15 years, but recognize the current system needs to change in order to do so. In 2006, the last year for which data is available, the county's recycling rate was 36 percent with a waste diversion rate of 39 percent.

"No matter where you are in Boulder, you see the mountains, you see the beauty," Gray said. "It's a gorgeous place, and you simply don't want to disturb that."

The commissioners are seeking ways to reduce the 900 tons of trash per day Frederick County collects from residents, because the county's Reich's Ford Road Landfill is nearly full. Much of the trash is being trucked to Virginia.

In fiscal 2008, the county paid an estimated $15 million to send trash to Virginia according to some county estimates.

The commissioners are exploring a plan to build a 1,500 ton per day incinerator that would cost more than $325 million. The incinerator would create some electricity, but would also create some ash that would need to be stored in a landfill. The county is searching for an acceptable site for the incinerator.

Besides Hagen and Gray, others on the fact-finding trip were Kevin Demosky, deputy director of the county's Division of Utilities and Solid Waste Management; Richard Terselic, a member of a citizens' Solid Waste Advisory Committee; Frederick Mayor Jeff Holtzinger; Frederick Alderman Paul Smith and residents Karin Tome and Jim Racheff.

Demosky served as the trip's cameraman. He filmed three hours of footage, and showed a condensed version of that Thursday.

Caroline Eader, a Frederick native who spends part of her time in Boulder, organized the trip. Eader is opposed to the incinerator, also known as a waste-to-energy plant.

Residents of Boulder, population 96,000, began recycling seriously in 1992. Eric Lombardi, director of Eco-Cycle, a private, nonprofit recycling agency in Boulder, said in the film the residents did not want to build a new landfill or an incinerator. Air quality in the Boulder area is a major concern, and an incinerator would have added to that.

Boulder is considering expanding its recycling to include composting. Boulder is also home to Eco-Products, an arm of Eco-Cycle that makes disposable plates, cups, utensils and food storage containers that can be composted.

In Boulder, it's trendy for people to have so-called zero-waste parties, where those attending recycle or compost all the waste and leftovers.

"Big government is way behind big companies and the community," Lombardi said in the film. "The demand for plastic is huge. In my opinion, plastic lumber is a sustainable product because it replaces redwood and cedar."

Eco-Cycle runs CHaRM, the Center for Hard to Recycle Materials, where things like office furniture, books, electronics, plastic swimming pools and a myriad of other items are recycled.

"If you have something like this next to a waste-to-energy plant, you'd have a lot less concern about things being burned that shouldn't be burned," Gray said.

Gray has not taken a position on the incinerator, but has said he likes the idea of expanding recycling in Frederick County. Hagen is the only commissioner on record as opposing the incinerator.