Three-time Tour de France winner Greg LeMond, left, gets a few pointers Friday from Neil Sandler, organizer of the Frederick Clustered Spires High Wheel Race, on how to mount and ride a big-wheel cycle. LeMond plans to participate in the one-hour high-wheel race in downtown today. 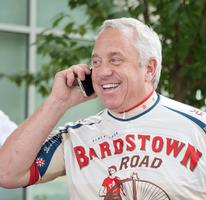 Greg LeMond talks on the phone. 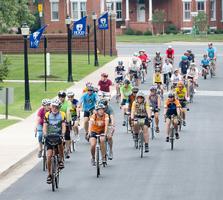 Three-time Tour de France winner Greg LeMond, left, gets a few pointers Friday from Neil Sandler, organizer of the Frederick Clustered Spires High Wheel Race, on how to mount and ride a big-wheel cycle. LeMond plans to participate in the one-hour high-wheel race in downtown today.

Greg LeMond talks on the phone.

Greg LeMond is famous for his cycling skills, but there's one race the three-time Tour de France winner doesn't expect to win when he participates in the Tour de Frederick this weekend.

The bikes, which have a large front wheel and a small back one, were popular in the late 1800s and are just one of the draws for the three-day Tour de Frederick.

"I'm definitely doing it," LeMond said Friday in a telephone interview as he waited for a lesson on a bike at the Hilton Garden Inn on Corporate Court. He said he expected several crashes, one of which may be his own, during today's event.

He tried riding a penny-farthing about four years ago, and he admitted, "I was nervous being on the bike."

That's up from about 100 participants last year and about 70 during its inaugural year. The event benefits the Boys and Girls Club of Frederick County and 1in6.org, an organization that builds awareness for men who were sexually abused as children. Lemond is on the board of 1in6.org and has talked publicly about being abused as a child.

The parking lot at the Hilton Garden Inn filled with cars, some with empty bike racks affixed to them, shortly after noon Friday. Cyclists in all shades of Lycra -- some blindingly bright -- stood with cycles and helmets, ready to leave for a 1 p.m. 25-mile ramble, the first of several rides planned for the weekend.

The tour includes several events and rides of varying lengths. Participants have the chance to participate in a 78-mile covered bridge ride beginning this morning. Covered bridge tours of 25 and 50 miles are also planned today. An eight-mile history tour of Frederick is planned for Sunday along with another ride.

Thomas Lynch, of Frederick, said Friday he wasn't sure if he would go for the 78- or 50-mile ride.

"I guess it will depend on how I feel in the morning," Lynch said.

Lynch said he discovered the beauty of Fishing Creek and other spots in the county by bike -- places he otherwise might have zoomed past if he were in a car.

When Steve Forman blew his knee out four years ago, he needed something to replace his love of running.

So Forman, who has completed 25 marathons, turned to cycling. This is his third time participating in the Frederick tour. Forman's wife, Gioia, and the couple's toy poodle, Chocolat, also made the trip from McLean, Va.

Forman already rides about 150 miles per week, so he didn't need to do much to train for the event, he said.

"Nice people, a good cause, and it's a fun three days," Forman said after picking up his registration information.