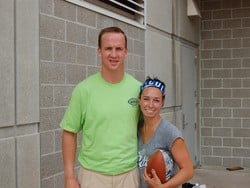 Damascus resident Rachel Greene stands with her favorite football player, Indianapolis Colts quarterback Peyton Manning. He served as inspiration to her while she recovered from a near- fatal car crash. She also met Colts head coach Jim Caldwell and tight end Dallas Clark. 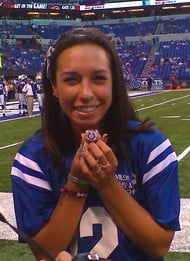 Damascus resident Rachel Greene models a Super Bowl ring during a trip to an Indianapolis Colts game. The team gave her access to training camp activities and named her the preseason games 12th man the organizations award for fans of the game. Greene was severely injured in a 2007 car crash and was inspired by Colts quarterback Peyton Manning during her recovery.

Damascus resident Rachel Greene stands with her favorite football player, Indianapolis Colts quarterback Peyton Manning. He served as inspiration to her while she recovered from a near- fatal car crash. She also met Colts head coach Jim Caldwell and tight end Dallas Clark.

Damascus resident Rachel Greene models a Super Bowl ring during a trip to an Indianapolis Colts game. The team gave her access to training camp activities and named her the preseason games 12th man the organizations award for fans of the game. Greene was severely injured in a 2007 car crash and was inspired by Colts quarterback Peyton Manning during her recovery.

DAMASCUS -- When Rachel Greene was lying in a hospital bed recovering from a near fatal car crash in January 2008, one of the first sentences she was able to put together was about her favorite professional football team.

"Did the Colts win the Super Bowl?" she asked her parents.

No, they told her. The San Diego Chargers beat them in the playoffs.

Her disappointment was a relief to her parents, John and Kathy. Rachel had suffered a brain injury during the crash. It was a sign their oldest daughter was coming back.

Rachel was a sophomore at the University of Delaware majoring in communications with a minor in journalism. She was also making the record books as a member of the university's swim team.

While home on winter break, Rachel had to keep up with her training. Around 6 a.m., driving to her workout along Md. 27 between Brink Road and Md. 355 in Germantown, she hit a patch of black ice. Her vehicle slammed into a large tree.

She doesn't remember the crash.

John Greene is a Montgomery County police officer and works as a dog handler. Kathy is retired from the agency. When they heard a crash reconstruction unit had been called out, they knew Rachel's injuries were life-threatening. The unit is usually dispatched for fatal crashes.

Rachel was taken to Suburban Hospital in Bethesda and given last rites. Besides a traumatic brain injury, she had broken several ribs and her pelvis, and had a collapsed lung.

It took her between six and eight weeks to fully emerge from a coma.

After two weeks in the intensive care unit at the hospital, she was moved to Kernan Hospital in Baltimore for rehabilitation.

In her hospital room she kept a poster of her favorite player, Indianapolis Colts quarterback Peyton Manning.

Her parents promised to take her to a Colts home game if she worked hard at rehabilitation, which included trying to regain mobility on her paralyzed right side. Rachel looked to her idol for inspiration. Manning was rehabbing a minor knee injury at the time.

"I'm just so inspired by him," she said. "I think he is an amazing person and athlete. I worked so hard. I was like 'Come on, Rachel!'"

While she is still in rehabilitation, Rachel, 21, has regained the use of her right side. She returned to school nine months after the crash and is swimming, but not competing, on the school's team.

During the third week in August, the family of four made the trip to Indiana to fulfill the promise.

They chose to attend the Aug. 20 home game because the team was set to play the Philadelphia Eagles. Rachel's sister Emily, 18, is an Eagles fan.

To make the trip even more special, Kathy wrote a letter to the Colts telling them of Rachel's devotion to the team and fight to live after the crash. She asked if Rachel could meet Manning or any of the players.

"I know that you probably receive many requests similar to mine," Kathy wrote. "I have always been proud of Rachel, but I must say that I am even more proud of her now than I have ever been. Recovering from this accident is the hardest thing that Rachel will probably ever have to do."

The letter made it to Chuck O'Hara, the Colts' director of marketing.

"I read it, and I was sympathetic to her story," O'Hara said. "I think her story was unique."

The Colts gave her access to training camp activities and named her the preseason game's 12th Man -- the organization's award for fans of the game. She got to go on the field and accept the game ball.

"I love the whole entire Colts organization," Rachel said. "I can't say enough nice things about them. They treated us like rock stars."

While the staff told them not to be too hopeful about meeting players, the family did get pictures taken with Manning, tight end Dallas Clark and head coach Jim Caldwell with the help of Justin Dickens, manager of publicity for the Colts.

During the game, Clark even waved to the family, who were given seats on the 50-yard line. He also gave Rachel the gloves he was wearing. The team ended up winning 23 to 15.

"It was the first time I saw her smile for a week straight," John said.

When Rachel was in the hospital, her aunt got silver bracelets for family and friends engraved with the words "Expect miracles."

Rachel decided to wear her bracelet to Indianapolis.

"This whole accident recovery process has been beyond hard," Rachel said. "I don't wish it on anybody. In some twisted way, it was all worth it. I guess miracles do happen."