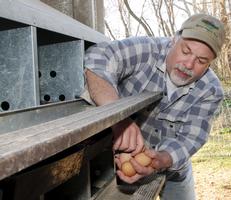 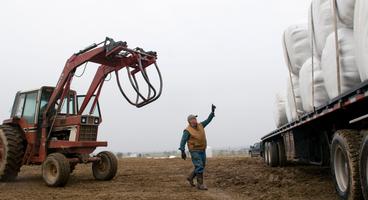 Dave Slater, farm manager at Nicks Organic Farm in Adamstown, directs the driver of a tractor recently as bales of hay are loaded on a trailer. 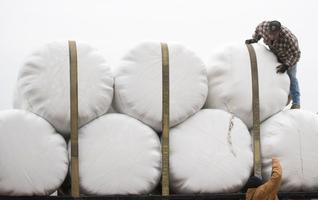 Eddie Mehrung, top, an independent hauler checks to make sure his payload is secure at Nick's Organic Farm in Adamstown recently. 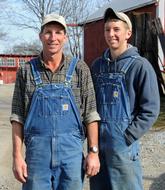 The father and son team of Ron, left, and Adam Holter run Holterholm Farms near Middletown and have been certified organic. 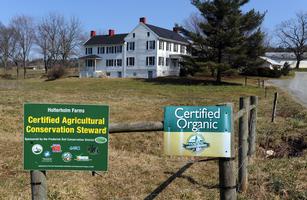 Holterholm Farms near Middletown run by the father and son team of Ron and Adam Holter have been certified organic.

Dave Slater, farm manager at Nicks Organic Farm in Adamstown, directs the driver of a tractor recently as bales of hay are loaded on a trailer.

Eddie Mehrung, top, an independent hauler checks to make sure his payload is secure at Nick's Organic Farm in Adamstown recently.

The father and son team of Ron, left, and Adam Holter run Holterholm Farms near Middletown and have been certified organic.

Holterholm Farms near Middletown run by the father and son team of Ron and Adam Holter have been certified organic.

By summertime, a fallow field behind Brian and Carolyn Biggins' house atop a hill in Adamstown should be lush with ripe, red organic strawberries ready for public picking.

That will be a first for the Biggins' farm, Miolea Organic, in Adamstown. It's also a way for the couple to diversify their offerings -- they already sell organic eggs, garlic and chicken, among other items ----as they seek to forge as much of a lifestyle as they can from their small farm.

"It's really analogous to long-term investing, the more spread out your investment vehicles, the less risk you have in total," Brian Biggins said.

Organic is big business, with total U.S. food and beverage sales in 2010 topping $26.7 billion, a 7.7-percent growth from 2009, according to the Organic Trade Association, which tracks industry trends.

Frederick farmers want some of that pie. Miolea's strawberries would be just one more organic item on a long list of such products already grown or raised in Frederick County, including blueberries, garlic, varieties of apples, chicken, turkey, eggs and dozens of others.

In "a lot of the counties in Maryland, people can spend more on food, and they spend more on (organics)," Deanna Baldwin, program manager for food quality assurance for the Maryland Department of Agriculture said. "Frederick can have a (community-supported agriculture group) for D.C. folks, Montgomery County, Baltimore folks."

"There finally may be enough critical mass that we're reaching a tipping point," said Eric Rice of County Pleasures Farm.

Rice has been farming organically since 1984 in Middletown.

Rice and other organic farmers in Frederick County track the trend to a growing desire among consumers to have a greater connection to where and how their food is grown as well as their own desire to practice sustainable farming methods.

"I think people are becoming more and more aware of what they're putting in their bodies," Brian Biggins said. He and his wife, Carolyn, moved to Adamstown to start Miolea in 2002 after having had gardens at his old home in Mount Airy.

But, just like farming, which is already notoriously tough, it's not easy being green. Anyone who sells organic-labeled products totaling more than $5,000 annually must be certified by a USDA-accredited agent. MDA became accredited in 2002, though it had its own regulations on organic farming prior to that, Baldwin said.

Congress passed the Organic Foods Production Act in 1990, which mandated the creation of the USDA's National Organic Program and an advisory board. The laws prohibit the use of synthetic pesticides, antibiotics, fertilizers and genetic engineering, along with a whole host of other guidelines farmers must adhere to, including types of feed. Those restrictions can mean organic farmers are more vulnerable to weather and hard-to-control pests, like stink bugs, which can ruin or seriously damage crops.

Farmers must also submit annual updates detailing which grains and seeds they will use and keep thorough notes about the farming process. Rick Hood, who owns Summer Creek Farm in Thurmont said that paperwork alone can take about 60 hours to complete for his farm.

"It is very difficult to keep up with," Hood said.

It can also take years to become organic. For a produce farm to become certified organic, the land must first be treated via NOP-approved organic methods for three years, Baldwin said. Additional rules apply to how animals may be raised and fed if it or its products are to be sold as organic food.

Much of that effort trickles down to the consumer by way of higher prices for organic food and produce, Baldwin said.

Holterholm's Ron Holter began to transition to a grass-grazing farm in 1995, went organic in 2000 and became certified in 2005. Holter said there wasn't much demand for organic milk in 2000. Now he sells it to Organic Valley, a national company.

Approaching Ron Holter's dairy farm, Holterholm, the first thing you might notice are the signs along the side of the road that indicate the "No Spray Area."

"That road is considered a buffer zone for us," Holter said.

Bumping around in a muddy farm Ford pickup, Nick Maravell, who owns Nick's Organic, in Buckeystown, remembers when growing organics was a pursuit thought of as being for the counter culture.

"When I started out in this business, you had to go to international organic meetings in the early 70s just to fill up a small meeting room with people," Maravell said. "Now, there are so many young people coming into the organic farming area now, it's really great."