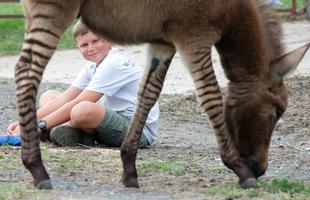 Justin Barber, 10, watches the familys new addition to the farm, Zach, a 2-month-old zedonk, who has a zebra for a mother and a donkey for a father. 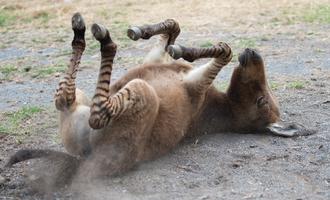 Zach, a 2-month-old zedonk, rolls in the dirt Wednesday on the Barber Farm. 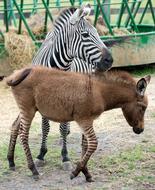 Justin Barber, 10, watches the familys new addition to the farm, Zach, a 2-month-old zedonk, who has a zebra for a mother and a donkey for a father.

Zach, a 2-month-old zedonk, rolls in the dirt Wednesday on the Barber Farm.

People who regularly travel U.S. 15 toward Thurmont may be wondering what happened to the zebra in the field at the Barber farm.

They will soon have not only the zebra to look at, but also a zonkey.

That is what his owners are calling Zach, though technically he is called a zedonk, according to A-Z-animals.com.

At first glance, he appears to be a brown donkey, but a closer look shows stripes on his legs and ears.

Zach is the result of an amorous adventure between Zoey, a female zebra, and Jackson, a donkey. That should make Zach a zedonk -- a zonkey is the offspring of a male zebra and female donkey -- but the Barbers prefer zonkey.

"My son, Jeff, bought the zebra three years ago from someone in Virginia who breeds them," Annette Barber said.

She and her grandson, Justin Barber, 10, do much of the caring for Zach and three donkeys on the private farm on Whares Lane, near Lewistown. The farm isn't open to visitors, the Barbers said.

Though Annette Barber lives in Thurmont and Justin lives in Emmitsburg, they are on the farm every day to tend to the animals, which also include a herd of Angus cattle and some chickens.

Zach was born May 4, Barber said.

"For three years we couldn't touch the zebra," Barber said. "Once we put up the corral, when we knew she was pregnant, it has changed some."

Though still skittish, Zoey now allows Justin to feed her and Zach, and to pet her muzzle and head. Barber can also pet her.

Zach will lose his "baby fuzz," Barber said, but will remain brown, like his father, Jackson, who was brown but is turning gray.

"When we got Zoey, she needed a companion," Barber said. The Barbers got Lisa and Jack, two rescue donkeys. Jack, though a good companion, was neutered.

"Jackson was given to us by someone who couldn't take care of him. We put them together and the result was Zach," Barber said.

She expects to breed more zedonks in the future.

True to her wild character, Zoey simply gave birth to Zach and let the youngster make it on his own.

"He was up and moving around that morning when we got here," Barber said.

Although rare in the wild, according to A-Z-animals.com, zebras and donkeys in Africa come into contact in villages.

Zedonks have been around for some time, combining the stamina of the donkey and speed and strength of the zebra. Most are bred intentionally, the website said.

Barber grew up on a farm in North Carolina. Retired from a job at Sears, she said the chance to buy the 200-acre-plus farm about six years ago was too good to pass up.

"I found a zebra whisperer on the Internet," she said. "She said we would never be able to touch Zoey or Zach, but we do."

The zebra and zonkey eat grain, hay and grass, Barber said, and they will eventually be turned back out to pasture.

Zoey is a Grant's or plains zebra, she said. Other types include Grevy's zebras and mountain zebras.

Besides caring for the zebra, zonkey and donkeys, Justin collects eggs from the chickens, some of which are Ameraucana chickens that lay "Easter" eggs of blue, red and yellow.

Justin got an Angus calf for Christmas, to start a herd for when he grows up. He said he plans to continue farming.