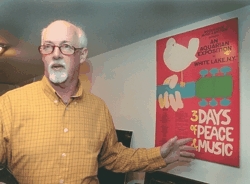 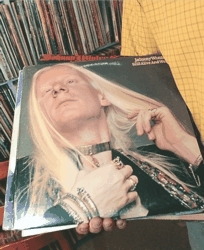 Josh Brooks cradles an album by his friend Johnny Winters who helped him get back stage during Woodstock. The resulting taped interviews with some of the top musicians of the day were a good boost for the fledgling WHFS radio station. 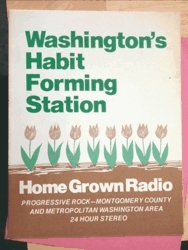 Josh Brooks talks about the early days of radio station WHFS at his Frederick home recently. He has saved much memorabilia from the iconic station's hey day.

Josh Brooks cradles an album by his friend Johnny Winters who helped him get back stage during Woodstock. The resulting taped interviews with some of the top musicians of the day were a good boost for the fledgling WHFS radio station.

Josh Brooks talks about the early days of radio station WHFS at his Frederick home recently. He has saved much memorabilia from the iconic station's hey day.

While some people may have been shocked when Infinity Broadcasting replaced alternative rock WHFS 99.1 FM with El Zol -- a blend of Caribbean and Central American dance music -- former DJ Josh Brooks remembers when the station catered to "easy listening."

In the late '60s, "it was elevator music," Brooks said, during an interview at his home in Frederick.

In 1969, he and Mark Gorbulew, students at Bard College in New York, regularly tuned into the Pacifica Station WBAI.

Following a tip from Gorbulew's father, who worked at Billboard, they ventured to the Washington, D.C. area, looking for a station that would hire them as program managers.

"At the time, no radio stations there were playing progressive music. We were thrown out of every place we went," except WHFS, where sales manager Jake Einstein agreed to sell them radio time -- 6 to 8 p.m. during the week; Saturday, 6 to 10 p.m.; Sunday, midnight to 6 a.m.

The station -- located in Bethesda, 102.3 on the dial -- specifically targeted listeners "who don't like long-haired music of any kind."

Brooks and Gorbulew named the program "Spiritus Cheese," after a friend's loft in New York City. To fund it "we had to get our own advertising," Brooks recalled. "We went to record stores, head shops, underground clothing stores ... Sometimes clients couldn't pay us in money and we'd wind up with something like a pair of bellbottoms."

They also needed to convince record companies, skeptical of their transient status within WHFS, to supply them records.

"We would tell the record companies we were doing a show on Bob Dylan and tell them what specific materials we needed. Gradually, we built trust," he said.

Spiritus Cheese typically offered theme based programming devoted to an instrument or artist. Musical autobiographies traced an artist's influences -- who they played with, who they covered, who covered them. A show on Little Feat, for instance, would include music by Allen Toussaint, Nolan Parker, and Chico Hamilton.

To promote Spiritus Cheese, flyers were distributed, listing the week's lineup and hours. While descriptors of the music included progressive, alternative, and acid rock, Brooks and Gorbulew sought something less confining; they chose "Protein Music," a neutral, more inclusive description -- an anti-label.

"FM was just coming on at the time. We were such small fish. We flew under the radar of the FCC," Brooks said.

Out of sight, Spiritus Cheese spun unreleased recordings, like a Nashville studio session with Johnny Winter, which captured his record-company-designed transition from blues to rock 'n roll.

Later, when Spiritus Cheese ventured to Woodstock with a tape recorder, intent on getting backstage, the connection with Winter paid off.

"We were having trouble getting back there," Brooks recalled, and moments before security offered the boot, Winter was helicoptered in for his performance and ushered them through.

Interviews, later aired to listeners, were conducted with Neil Young, Jerry Garcia, even the Congo drummer for Jimi Hendrix, a 17-year-old entering his first professional gig.

"We referred to it as appointment radio. Even if you didn't like the music you could learn something and stay tuned in because it's a whole show rather than an assortment of arbitrary selections," he said. With a regulated format, listeners would get locked into a playlist and have to wait for the next segue of music. "You would be driving to work and not be able to get out of your car."

Late Saturday night or early Sunday morning -- depending on the listener's perspective -- Spiritus Cheese might offer a James Brown concert, while the following week paid tribute to the "women of rock."

"We always got musicians to drop in and play when they were in town," he added.

By 1970, once Spiritus Cheese had unveiled the commercial potential of its programming, Einstein began shifting WHFS towards a 24-hour progressive format.

Ironically, Brooks and Gorbulew were fired.

"They allowed promo men to run the show, to tell them what's hot. It didn't work. They used the same easy listening DJs," he said, imitating a crystal-clear, saccharine voice.

"They wouldn't entrust an investment to long-haired, 23-year-old, non-establishment types."

In response to public outcry, Einstein quickly re-hired them as DJs and expanded their time.

But soon after, Gorbulew's girlfriend, Amy, was suspended from the station for four weeks after a Saturday night show she hosted played a Firesign Theater skit with a curse word in it.

When she returned, programmers decided they wanted a male voice, Brooks said, and held her off the air. She and Gorbulew quit in protest, taking the name "Spiritus Cheese" to WGTB, the Georgetown University radio station.

"I was ready to go too, except I was completely broke," Brooks admitted. After taking a sabbatical to finish college, he returned to WHFS in the summer of 1972.

By then, Einstein had hired his sons, David and Damian, as DJs.

"We tried to deliver a cohesive set and have it all fit together. Sometimes we would play the most God-awful music. Other times you would nail it."

"We believed the music could tell the story by itself," he said, explaining the station's preference for rock over talk.

These same bands and more were featured in the Homegrown Festival, held at Warner Theater, the predecessor to the HFStival.

In 1975, Damian was involved in a serious automobile accident. Two years later, after he returned to the air in a wheelchair, his voice became difficult to understand, Brooks said, and executives voted to take him off the air.

Damian's wife filed a discriminatory lawsuit, which the station decided to fight, even though as the trial ensued, Brooks says, "we found out he had the most listened to show.

"But rather than embrace him, the station fought on" and eventually lost.

WHFS "was about the music, not slick DJs," and to Brooks, the lawsuit signified the beginnings of corporatization.

The early days of FM radio reflected AM in its prime, he explained. "You could hear Elvis, Cash, Motown, Wilson Pickett, Tula Clark. Regional acts might be requested above the Beatles. You could drive across the country and hear different regional acts. Now it's all homogenized."

Brooks remained at WHFS until 1979, when he left to manage Root Boy Slim.

"That's why talk radio rose in popularity. You can be surprised."