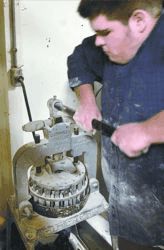 Caisse McGovern of the Jefferson Pastry Shoppe weighs dough to be fit into a pan and pressed to become individual kinklings recently. The dough which came out of a mixer has already had one chance to rise.

Caisse McGovern of the Jefferson Pastry Shoppe weighs dough to be fit into a pan and pressed to become individual kinklings recently. The dough which came out of a mixer has already had one chance to rise.

Fat Tuesday, Shrove Tuesday, Pancake Tuesday -- call it what you will . . . but it always means a day of feasting on lots of sweet, heavy foods -- enough to last the body the 40 days of sparse Lent -- until Easter Sunday.

The Tuesday before Ash Wednesday, which marks the beginning of Lent, was the day to use up all the 'forbidden' foods in the household.

It's an ancient custom, all but forgotten in these more secular times.

But in Frederick, traditions hold strong as area churches prepare for pancake dinners and bakeries stock up on kinklings, also known as fasnachts.

Perhaps it is Frederick's German roots that stir the yearning for kinklings on Shrove Tuesday.

Many newcomers to the area claim they have never heard of the deep-fried treat before moving to this area -- where yes, you must have saurkraut with your turkey on Thanksgiving.

John McGovern, owner and baker at the Jefferson Pastry Shop on Jefferson Pike, moved to Frederick about 25 years ago from Rhode Island, and agreed that he had never heard of kinklings. His first year as the owner of the bakery, he soon discovered demand is high in February for kinklings.

"The phone rang off the hook with customers seeking kinklings. I could barely keep up," he recalled.

This year the bakery started production several weeks before Fat Tuesday, which is March 4.

Unlike some kinkling recipes, McGovern has modified his recipe to include potato flour, rather than the heavier mashed potatoes some recipes use.

"I replaced some of the flour with potato flour and reduced the egg content. I don't like too much egg in anything that will be fried. The presence of egg increases fat absorption," said McGovern.

Nor does he fry his kinklings in lard.

"Lard is historically the gold-standard when making homemade kinklings," conceded McGovern. "At (the bakery) we don't use lard. In the home setting kinklings are eaten warm, soon after they are fried. I suspect that lard fried kinklings aren't so appealing after they've cooled and the lard sets-up in the sugar coating.

"In my opinion, using lard for kinklings isn't suitable for bakery production requirements. Our goal is to produce a light, soft and sweet donut treat, not a weapon," he added.

Many home cooks, using mashed potatoes, turn out a heavier kinkling with a slightly different flavor.

There are many ways people enjoy kinklings -- sprinkled with powdered sugar, spread with King syrup, dunking.

But like in all cooking, there are as many kinkling or fastnacht recipes as there are cooks.

And, usually, your favorite kinkling is the kinkling you grew up eating, if you were lucky enough to have a mother, aunt, grandmother or neighbor willing to make these special Tuesday treats.

"People are so enthusiastic about them." said McGovern. Kinklings have a special place in people's memory. They recall their childhood kinkling days with fond memories."

9. See farm animals, play games and chow down at the Great Frederick Fair