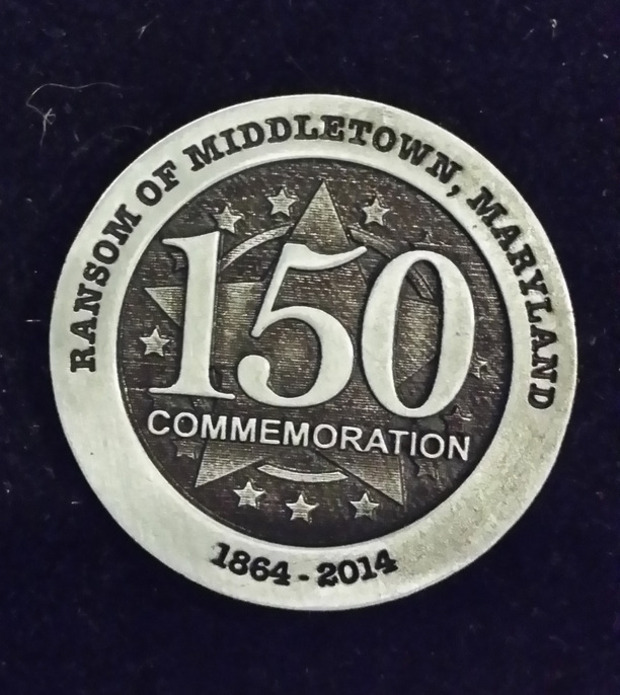 This coin is one of several momentos Middletown produced for the Civil War 150th. News-Post photo by Ike Wilson 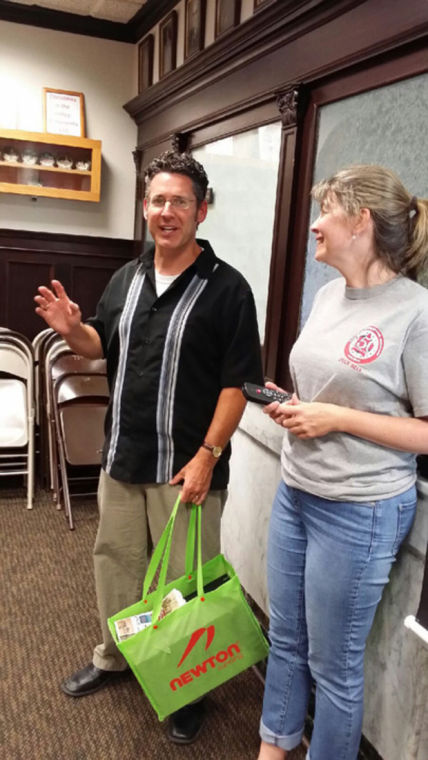 This coin is one of several momentos Middletown produced for the Civil War 150th. News-Post photo by Ike Wilson

MIDDLETOWN — Town residents packed the Municipal Center on Monday to see “Maryland’s Heart of the Civil War,” an award-winning documentary produced by the Tourism Council of Frederick County in partnership with Maryland Public Television.

The documentary introduces viewers to the compelling Civil War stories that exist in the three-county Maryland region known as the Heart of the Civil War Heritage Area.

Historians speak about the battles and civilian experiences that occurred in Carroll, Frederick and Washington counties during the Civil War and a travelogue at the end offers suggestions on visiting sites in the Heritage Area.

Trying to pack so much information into a 47-minute documentary was challenging, said Christopher Haugh, the Tourism Council’s scenic byways and special projects manager.

Haugh and the Maryland Public Television team did an outstanding job of telling the fascinating stories of our three counties — Carroll, Frederick and Washington — during the Civil War, said Elizabeth Scott Shatto, Civil War Heritage Area director and coordinator of the Frederick Historic Sites Consortium.

The project features experts who shared their knowledge and interpretation of the significance of our border state experience, in a way that satisfies both the enthusiast and those who are just starting to explore the Civil War, Shatto said.

The documentary got a positive reaction from viewers.

“I grew up in this area and I wanted to know about the rich history and learn more about the land we live on,” said Liz Hough, who brought her two children to see the documentary.

Bruce and Terri Brierly said they did not know what to expect, but the couple gave the documentary high marks.

“I thought it was an excellent movie,” Terri Brierly said. “I was hoping to see the Middletown ransom, but it was very informative.”

Even teenagers enjoyed the project.

“The true battle scenes made you feel like you were in it,” Middletown Middle School student Trey Dravvorn said. “I liked it a lot.”

The documentary made Darby Dravvorn, 13, feel like the commentators were interacting with the audience, she said.

“It had a lot of cool scenes,” Darby said.

Getting kids interested in history is what it’s all about, said Lydia Hutchinson, member of the Middletown Valley Historical Society.

“I’d seen it before, but it’s good to watch many times,” Hutchinson said. “There’s so much information to remember it all.”

Many visitors to Frederick County and the Heart of the Civil War Heritage Area are seeking out historic and cultural sites, and this film helps local sites connect with them, said Charissa Hipp, Tourism Council’s digital marketing and media relations manager.

“This is an important audience for us to reach because studies show that heritage travelers stay longer, spend more, and make more return visits, and this film gives them an overview of the Civil War history that occurred here and encourages them to come experience it for themselves.

"It's also a great reminder, as this area nears the end of several years' worth of special events commemorating the sesquicentennial, that the Heritage Area has many wonderful opportunities for visitors on a regular basis, not just during commemorative years.”

Winning an Emmy Award for the project from the National Capital Chesapeake Bay Chapter of the National Academy of Television Arts and Sciences “was icing on the cake,” Haugh said.

The film has been aired on PBS stations all over the country, and many heritage travelers are prompted to come to mid-Maryland by the film, Shatto said.

WHAT: Middletown: In The Path of War exhibit opening and guest speaker Dennis Frye

• Coming Aug. 23 is a collection of commentaries, a free online multimedia companion to Maryland’s Heart of the Civil War. Check the Tourism Council’s website for details as time draws near at visitfrederick.org.