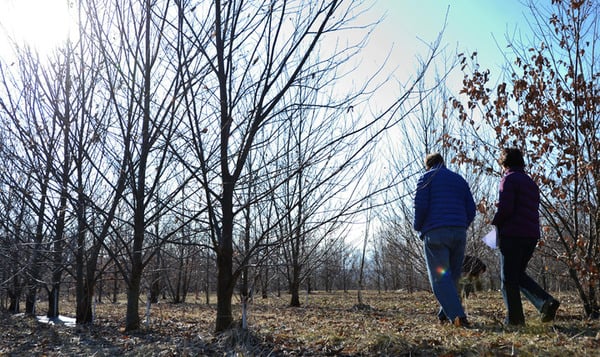 Art and Bonnie Dee walk Sunday through an orchard of American chestnut trees following a presentation on a fungus that is killing the trees. 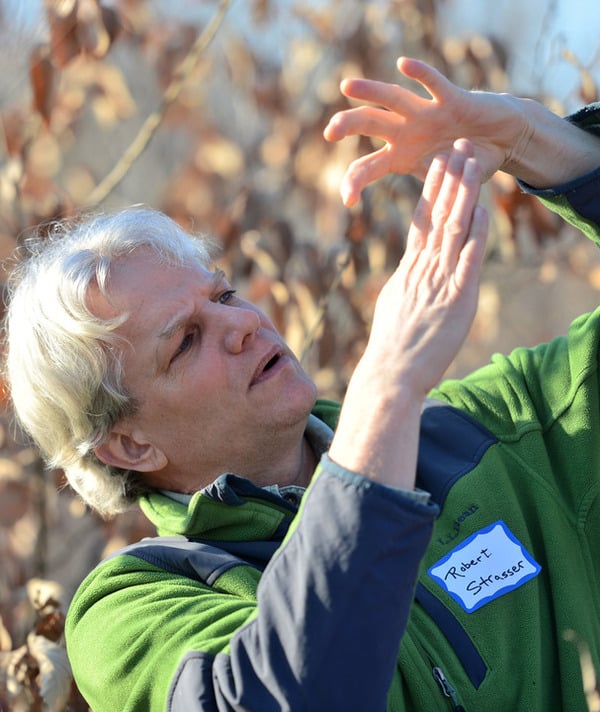 Robert Strasser discusses Sunday how the American chestnut tree has been affected by a fungus that has spread throughout its population.

Art and Bonnie Dee walk Sunday through an orchard of American chestnut trees following a presentation on a fungus that is killing the trees.

Robert Strasser discusses Sunday how the American chestnut tree has been affected by a fungus that has spread throughout its population.

MIDDLETOWN — Most of the leaves have fallen for the season, but that didn't stop visitors from trying to distinguish American chestnut trees from Chinese chestnuts at the Fox Haven Learning Center research orchard on Sunday.

Biologist and artist Robert Strasser walked with visitors, pointing out the curvier edges and softer underside of Chinese chestnut leaves and the reddish hue of American chestnut branches.

The American chestnut was once abundant in this part of the country, stretching south from Maine to Georgia and outward from the spine of the Appalachian mountains.

The trees could grow to 120 feet tall and burst with white flowers in the summer.

“You would go outside and think your eyes were playing tricks on you,” Strasser said. “It would look like snow dotting the landscape.”

American chestnuts were an important part of the economy in the eastern United States in the 1900s, contributing lumber, fuel and food for millions.

The numbers plummeted after blight, a deadly Asian fungus, was introduced unnoticed in the 1800s. By 1904, there was a full-blown pandemic, and entire sections of forest were dying off, Strasser said.

Scientists estimate there were about 4 billion American chestnuts growing in the United States at one time. Today, the number stands at about 350 million, though most of those trees are saplings growing from the roots of already-dead large trees, Strasser said.

The chestnut blight is known as the largest ecological disaster of the 20th century and destroyed about 4 billion trees between the early 1900s and 1950, according to The American Chestnut Foundation.

Because American chestnut saplings are still abundant, the trees are not classified as an endangered species, Strasser said, even though the saplings are not likely to grow to full size before succumbing to blight again.

“We're sort of in a race with time to find a solution,” he said.

As a result, biologists and nature lovers are working throughout the eastern United States in orchards such as Fox Haven to breed American chestnuts with Chinese chestnuts, which are resistant to the blight. After the first two American and Chinese trees are crossbred, biologists begin the process of “backcross breeding” to the original American chestnut species. The goal is to create a line of Chestnut trees that are 94 percent American, but retain the Chinese characteristics of blight resistance.

The Fox Haven orchard, which includes up to 850 trees, is the largest research orchard in the state of Maryland.

The oldest trees there were planted in 2005.

There are two other backcross orchards in Frederick County, at ThorpeWood in Thurmont and on Maryland Department of Natural Resources land near Urbana, according to the Maryland Chapter of The American Chestnut Foundation.

Art and Bonnie Dee were among those who ventured out into the Fox Haven orchard for a look on Sunday.

The couple lives in downtown Frederick and works to preserve their own century-old trees, so they wanted to learn more about the Fox Haven efforts.

“This really represents the beauty of Maryland,” Bonnie Dee said. “And the consciousness that's here in Frederick for gardening and food and preservation.”

So nice to see some uplifting news in our county!

One of my Frederick city houses of past years had beautiful chestnut trim, solid chestnut doors and staircase.