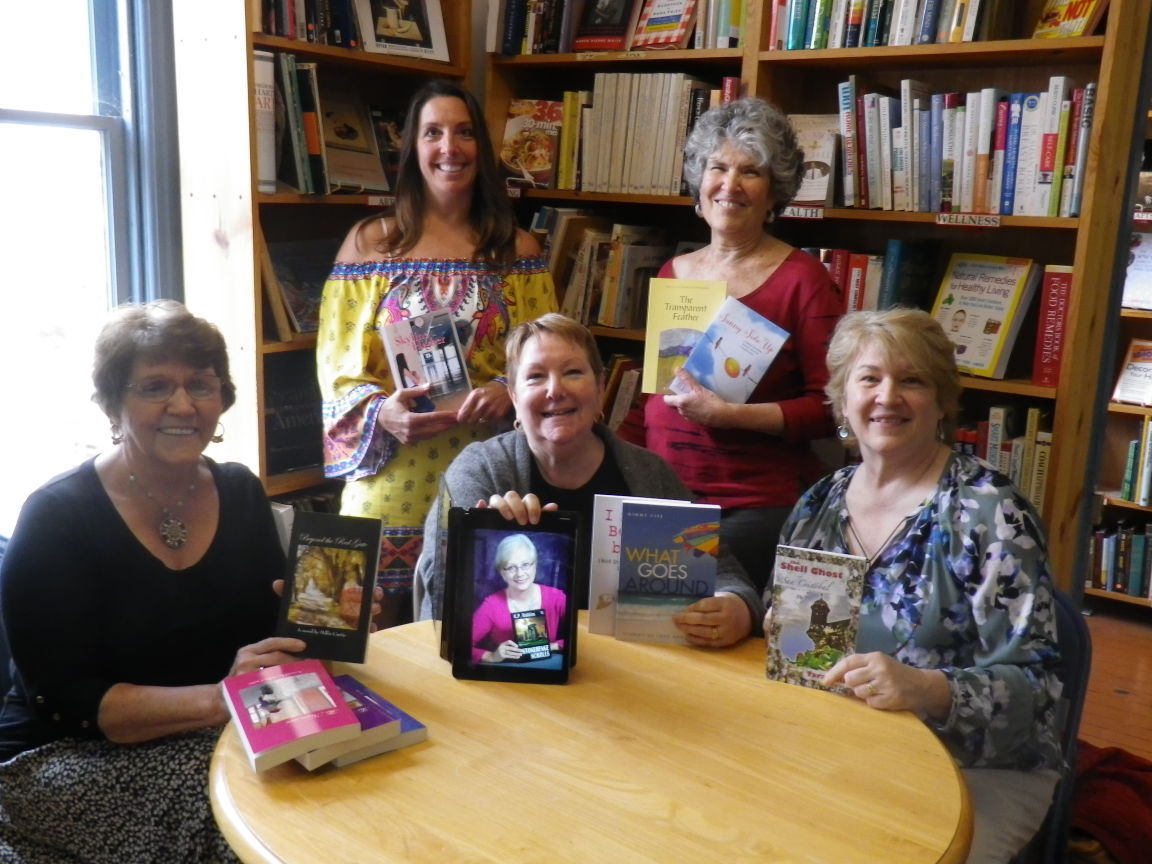 A group of women writers meets each week in Shepherdstown, W.Va., to motivate and inspire one another. From left, standing, Katherine Cobb and B.J. Appelgren, sitting, Millie Curtis, Ginny Fite and Tara Bell. K.P. Robbins is shown in the iPad. 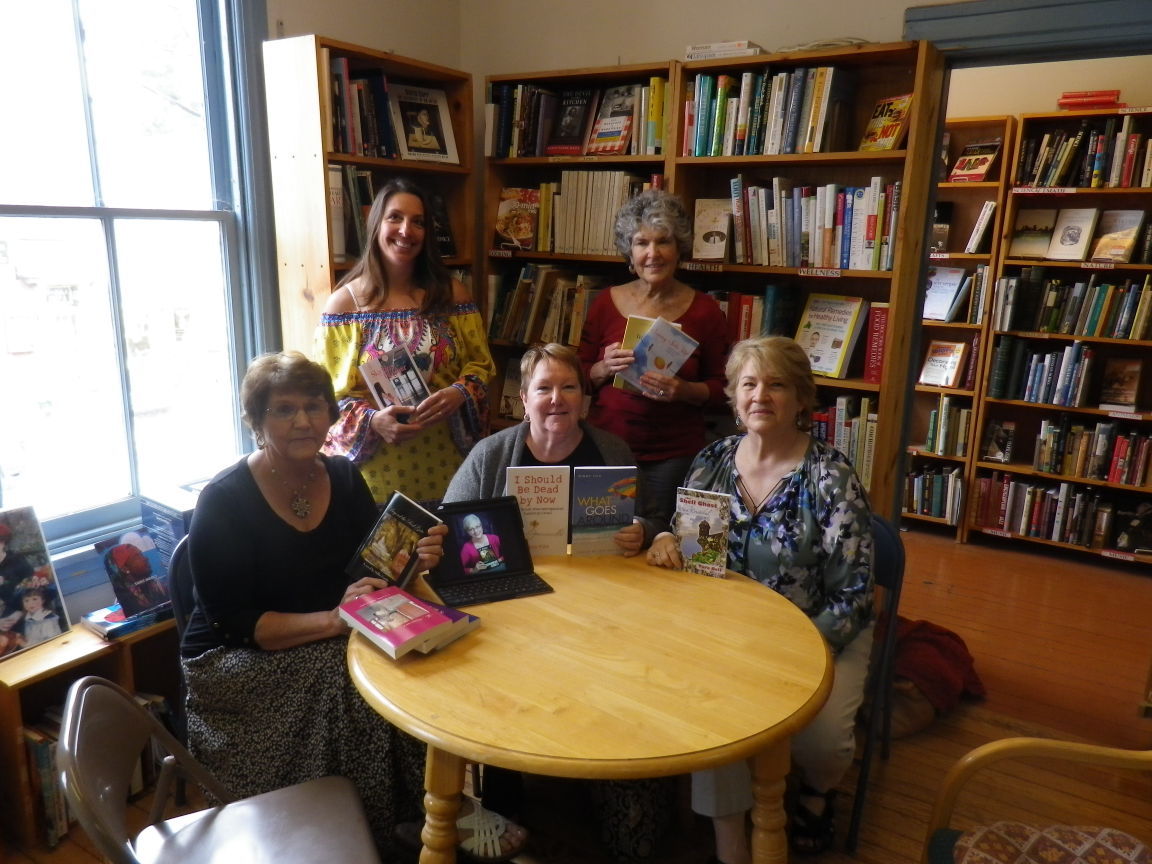 A group of women writers meets each week in Shepherdstown, W.Va., to motivate and inspire one another.

A group of women writers meets each week in Shepherdstown, W.Va., to motivate and inspire one another. From left, standing, Katherine Cobb and B.J. Appelgren, sitting, Millie Curtis, Ginny Fite and Tara Bell. K.P. Robbins is shown in the iPad.

A group of women writers meets each week in Shepherdstown, W.Va., to motivate and inspire one another.

As they spent their adult lives building careers and families, three women never let go of their dreams to be published authors. But as the decades passed, their goal seemed increasingly less likely — until they met each other.

Twelve years later and now six members strong, the female writers’ group will meet at Four Seasons Books in Shepherdstown, West Virginia, on Saturday to talk about their work and sign copies of their latest published books, which include a wide range of genres, spanning fiction, memoir, young adult and short stories.

The women all agreed that they could not have accomplished their goals without each other. While they had been writing outlines and drafts of their individual book ideas for years before forming the group, they had nowhere to turn for the level of regular constructive feedback vital to producing quality writing.

Katherine Cobb, the group’s newest and youngest member, said that fellow writers have a “different mindset from your average reader,” offering critique beyond surface observations.

“I had several early readers of this novel before I was with this critique group,” she said. “It’s terrible. They have no idea what to say. ‘Oh, it’s great.’ That’s not helpful. I don’t want to hear it’s great. I want to hear where I stumbled.”

Ginny Fite, the only member to publish a book before joining the group, emphasized that their weekly meetings strictly focus on writing and bear no resemblance to a social gathering.

“It’s work. This is a very intense group. We don’t have cookies. You have to ask for water,” she said. “There’s just reading the work and then you have other minds focus intently on what it is you’re doing: character, plot, structure, the words themselves, the order to the words, a particular word, or whether the pace is right.”

B.J. Appelgren, one of the three founding members, said, “We’re not giving our opinions. We are working on the art of writing.”

Cobb, who writes young adult fiction based on her experiences growing up in California in the 1970s, said that turning to other writers during the development stage of her work helps her to distance herself from the characters enough to see major problems.

“The boy who was supposed to be likable wasn’t likable,” Cobb said of one of her characters. “So I had to go back and make him nicer. You can’t have everyone unlikable. You have to want to root for people.”

Fite said that the work they do within the group is part of the development stage of writing, which is an entirely separate process from editing. She sees the development stage as focusing on the fundamental elements of the book, such as creating backstory for a character or deciding the direction of the plot. She said each group member sends their finished manuscripts to professional editors, but that editors do not provide the type of feedback that changes the essence of a story.

The writers’ group also offers support for the more mundane challenges of writing. Cobb said that the regularity and structure of the group provides a source of external pressure to force her to meet deadlines.

“Before I started with the group, I would say, ‘I hope I can work on my writing this week,’ and then work would take over and nothing would get done,” she said. “Months could go by and I hadn’t touched my project. If you have a deadline every week, that keeps you accountable.”

Fite said that she once belonged to a writers’ group that met once a month, which did not provide enough structure for members to meet deadlines or to take the meetings seriously.

“People were constantly not bringing anything,” she said. “They would come and bring themselves an ice cream and a soda, and then what could they say, really?”

While all of the members agreed that they didn’t intentionally exclude male authors, Fite believes that having an all-female group has facilitated a winning formula.

Millie Curtis, a founding member, said that one man had tried to join the group once, but he didn’t understand their process.

“He read his manuscript and he looked at all of us and said, ‘Now how do I get this published?’” she said.

The group does help each other navigate the mechanics of publishing, but only after helping each other through the arduous development process.

Cobb said that she has helped the other members with the technical requirements of self-publishing and even designed the cover of another member’s book. Publishing houses have bought books from two of the authors, and those experiences are shared with the group.

While they like to keep their numbers small, sometimes they accept new members while one or more of them is on hiatus. They have a seventh member right now who is in the midst of trying to publish her first book.

“If you look at the success of the group, you can pretty much assume she will produce a book that will be published,” Fite said.

Applegren will be signing two memoirs, “Sunny Side Uptakes” and “The Transparent Feather.” The former recounts her experience at an English Manor house in the 1970s. The latter is an account of her “intimate meeting with the infinite” that she shared with a fellow author as he neared death.

Tara Bell will sign her children’s books based on her experiences growing up in Puerto Rico. “I tell a tale about a Puerto Rican girl, Nina, and her cousin, Rique, who find the truth behind the ghost adorned with sea shell necklaces,” she said.

Cobb will sign her book, “Skyline Higher,” a fictionalized retelling of her own experience navigating an Oakland, California, high school in the 1970s.

Curtis will sign four of her novels based on life in Berryville, Virginia, in the early 1900s.

Fite will be signing several of her poetry and short-story collections. Her first novel, “Folly,” is a mystery thriller set in Charles Town, West Virginia, that will be released this year by Black Opal Books.

K.P. Robbins will sign copies of her book “The Stonehenge Scrolls,” which explores how the famous circle came to be. Her second novel, “PMS: The Power and & Money Sisters,” will be published later this year.