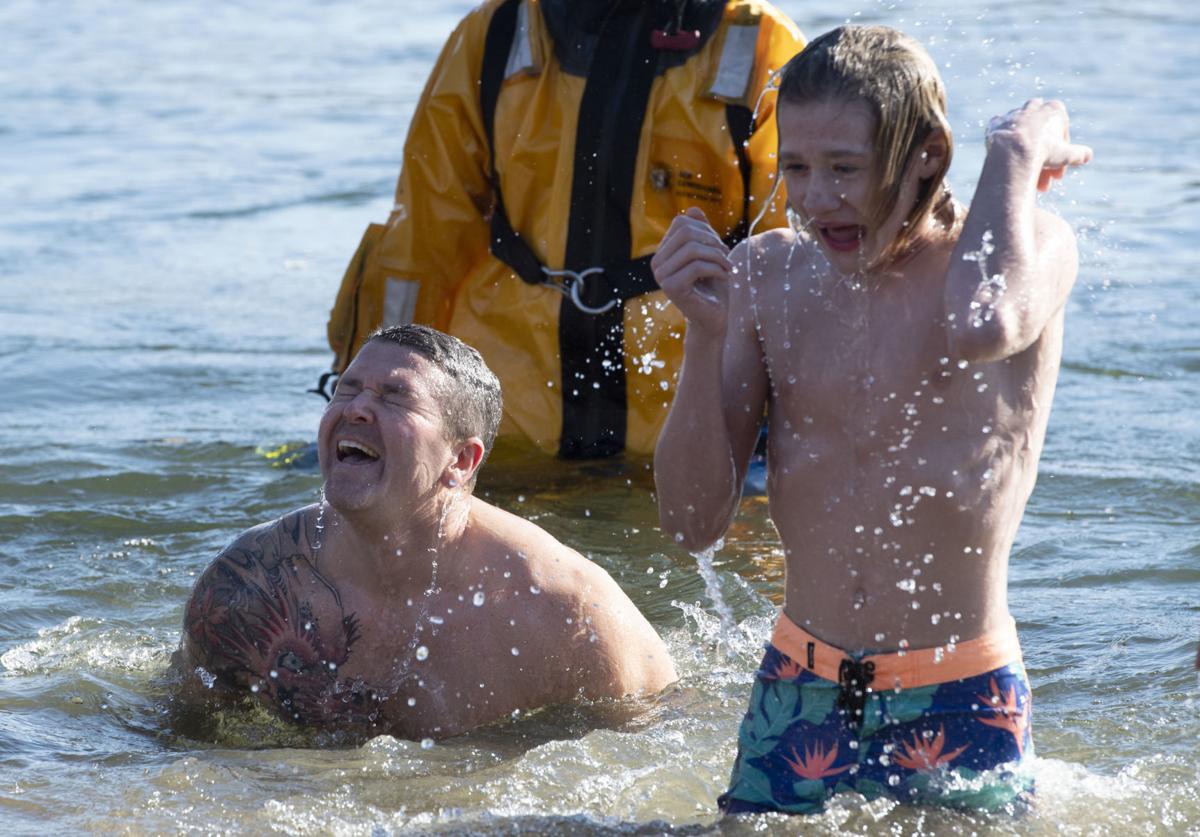 Shaun Peters, left, and Morgon Corwine, 13, emerge from the Potomac River after submerging themselves during the “Freezin’ for a Reason” polar plunge Wednesday in Brunswick. 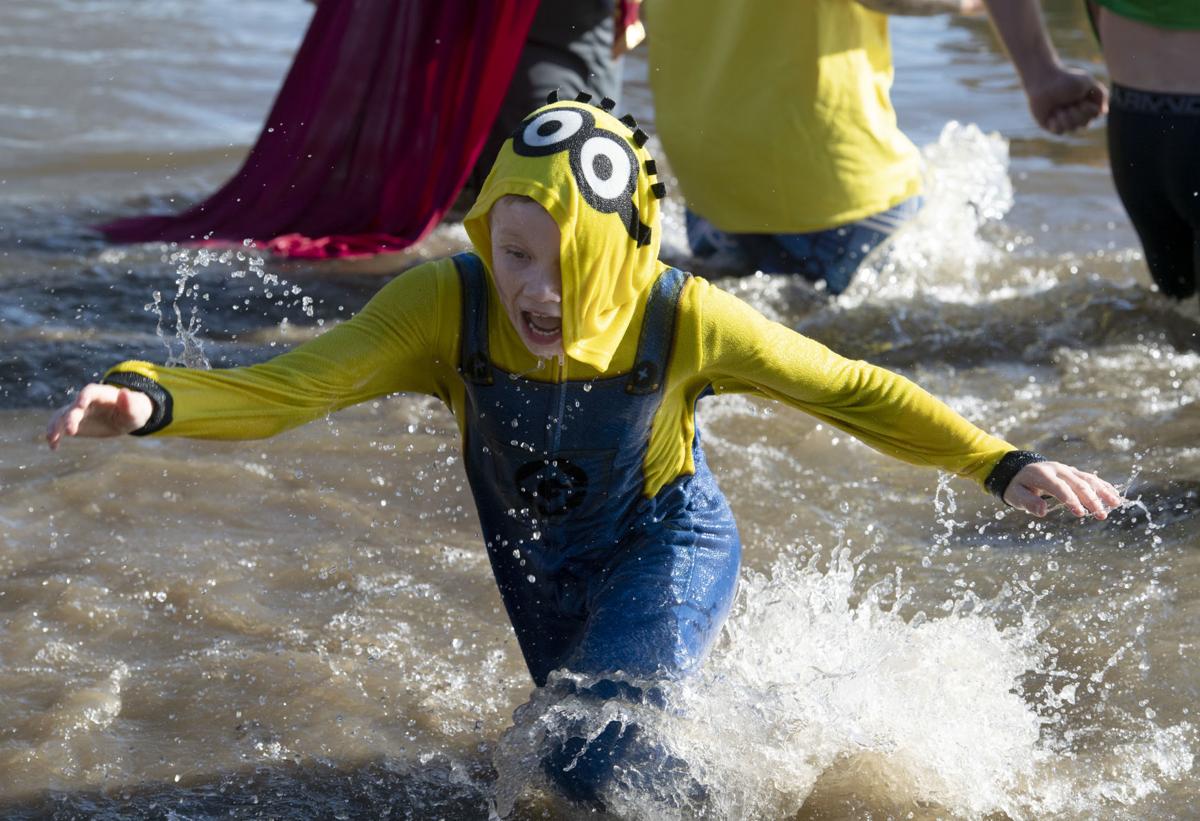 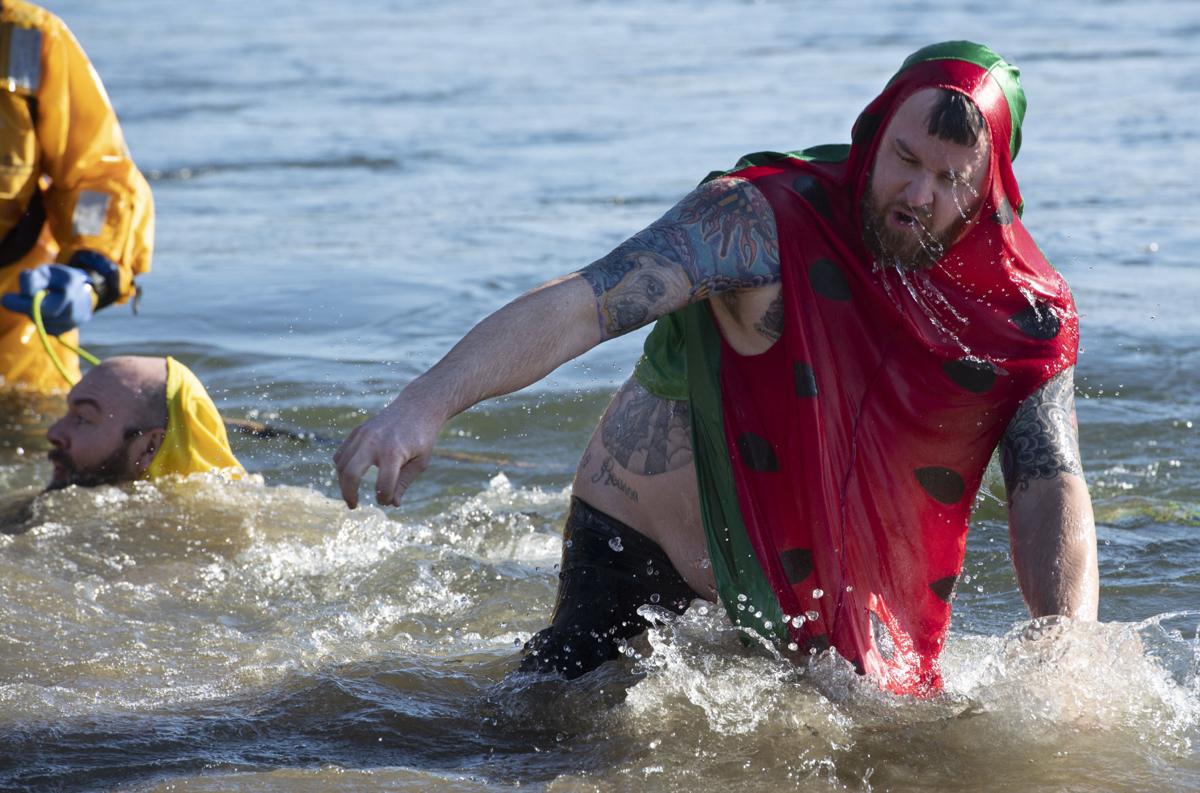 Sean Engle, right, of Hagerstown, and Emmett Lannon, of Shepherdstown, West Virginia, emerge from the water of the Potomac River during the “Freezin’ for a Reason” polar plunge Wednesday at the Brunswick Family Campgrounds in Brunswick.

Shaun Peters, left, and Morgon Corwine, 13, emerge from the Potomac River after submerging themselves during the “Freezin’ for a Reason” polar plunge Wednesday in Brunswick.

Sean Engle, right, of Hagerstown, and Emmett Lannon, of Shepherdstown, West Virginia, emerge from the water of the Potomac River during the “Freezin’ for a Reason” polar plunge Wednesday at the Brunswick Family Campgrounds in Brunswick.

About 50 people jumped into the freezing water of the Potomac River on New Year’s Day for “Freezin’ for a Reason,” Brunswick’s own polar plunge.

The plunge raises money for the Frederick County Special Olympics, the Brunswick Food Bank and BEACON (Brunswick Ecumenical Assistance Committee on Needs) and takes place at the Brunswick Family Campground.

Debby Pfeifer has been doing the plunge since its beginnings 14 years ago.

“I absolutely enjoy it and it’s a lot of fun,” she said.

She remembers a few years ago, when it was so cold out that they had to break the ice on top of the river in order to submerge themselves. This year’s plunge was different, with plenty of sun and temperatures in the 40s.

With so many years of experience under her belt, Pfeifer has learned a thing or two about jumping into the freezing cold water.

“It’s not the jumping in that kills you,” she said, “It’s coming out.”

Luckily, there was a warming tent where plungers could warm up after they got out of the water. Pfeifer also advised taking off jackets and anything that won’t be worn into the water ahead of time, to give the body time to adjust to the outside temperature.

“Your heart stops for a second,” she said.

Many of the plungers simply ran in and ran out, but many completely submerged themselves in the water before exiting. There were also plenty of people who came in costume, like Sue Johnson and her 8-year-old son, Matt Johnson. They decided to attend and wear Minion costumes after Matt heard about Councilman Jerry Donald’s dare to do the plunge.

“Why not start the near year dressed like a minion jumping into the Potomac?” Sue Johnson said.

For others, the plunge is a family tradition. Cousins Bobbi Danner and Danielle Roelky have been coming with their family on New Years Day for a few years. This was Roelky’s first time plunging, but she wasn’t afraid.

“I’m not cold,” she said while waiting to go into the water.

Lee Zumbach, one of the organizers of the event, said that the event usually raises between $5,000 and $6,000, even though only a $25 donation is required to plunge. Many people donate but don’t plunge, or donate to a friend’s cause.

The choice of having the plunge on New Year’s Day was inspired by another group in Washington County who do the same thing.

“We thought that everybody has off, and it’s not a religious holiday,” Zumbach said. “So it just seemed like this is a way for people to ... get a fresh start on the year.”