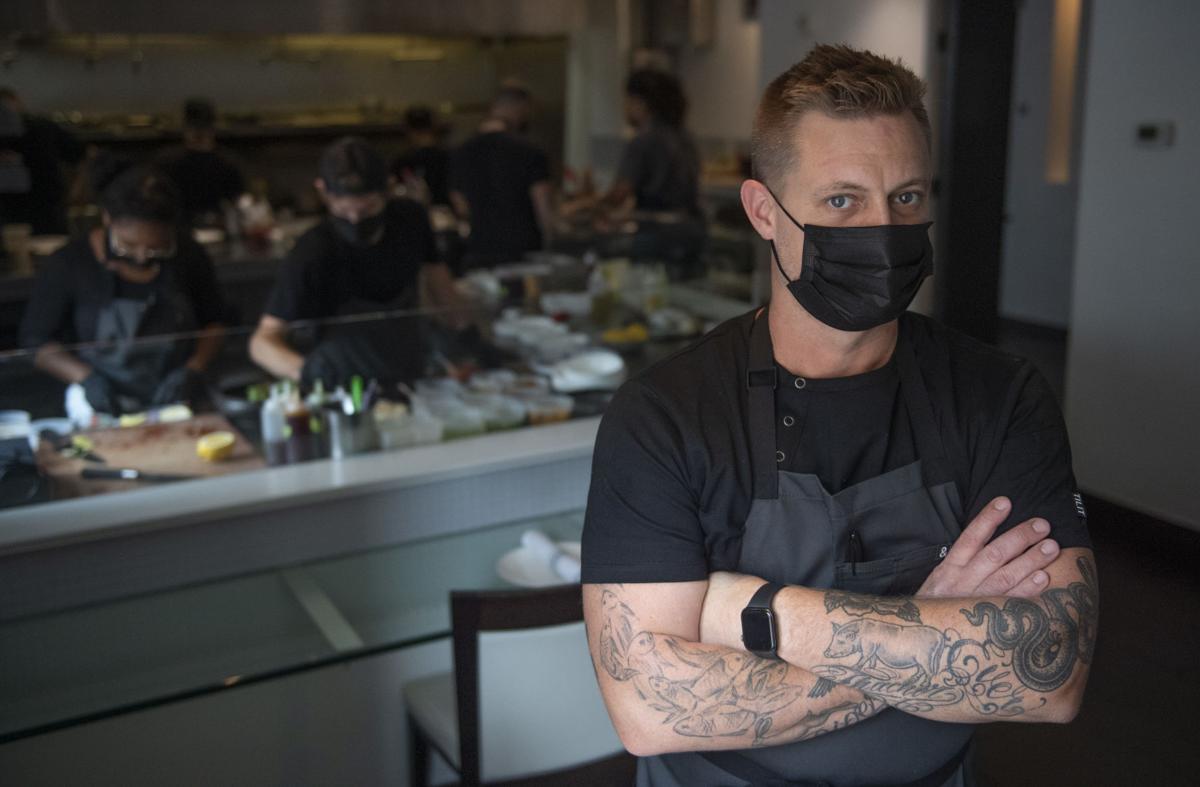 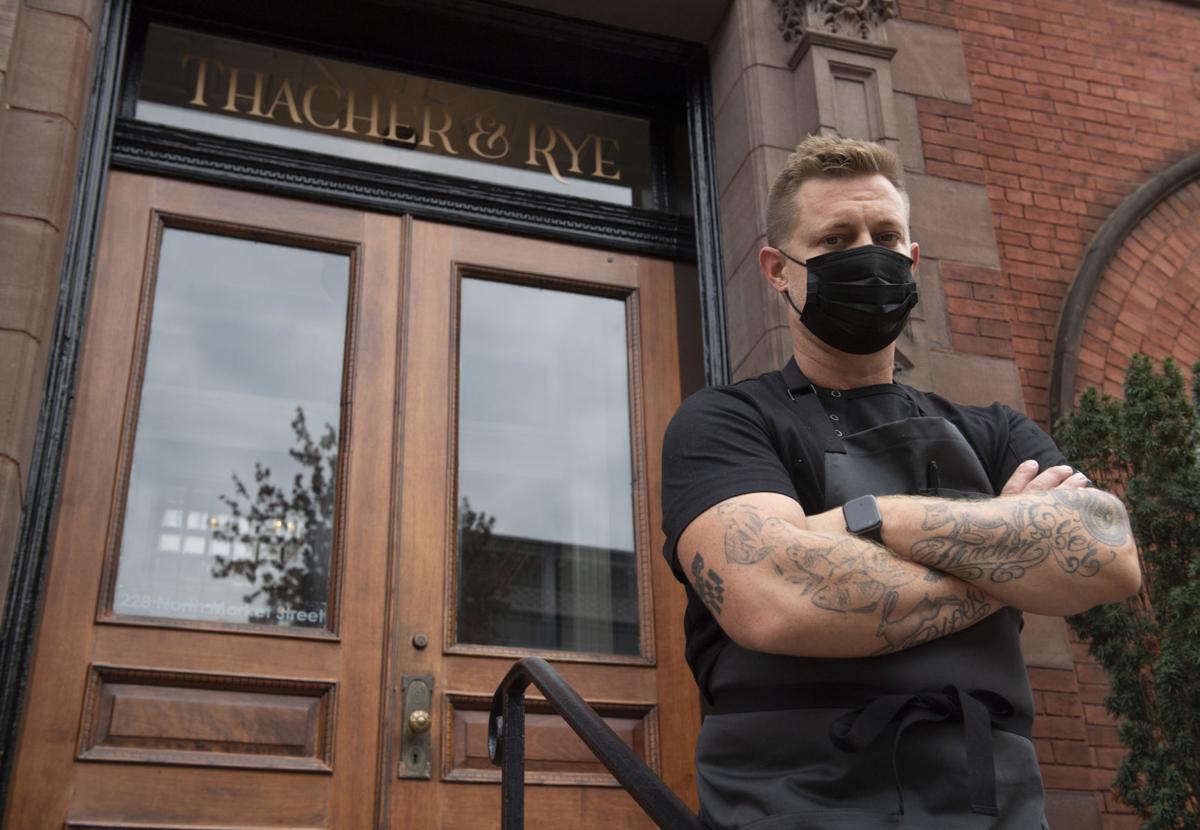 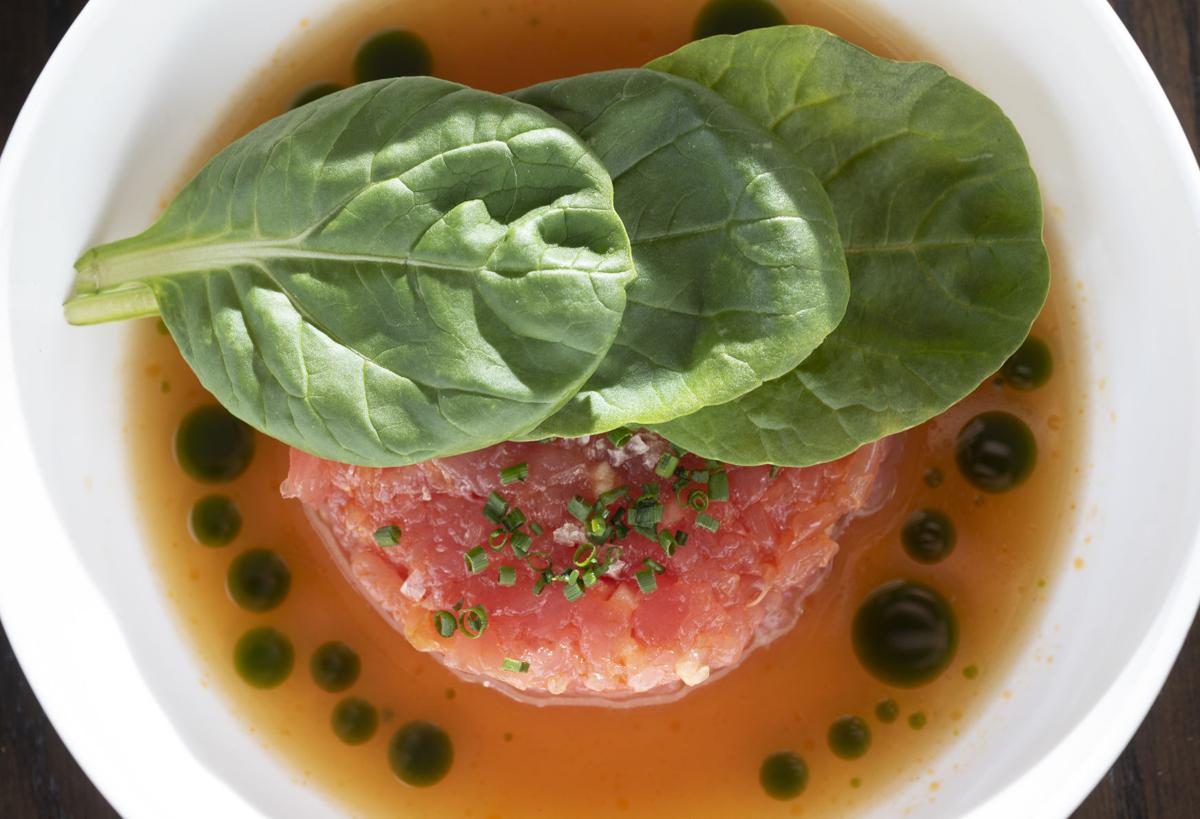 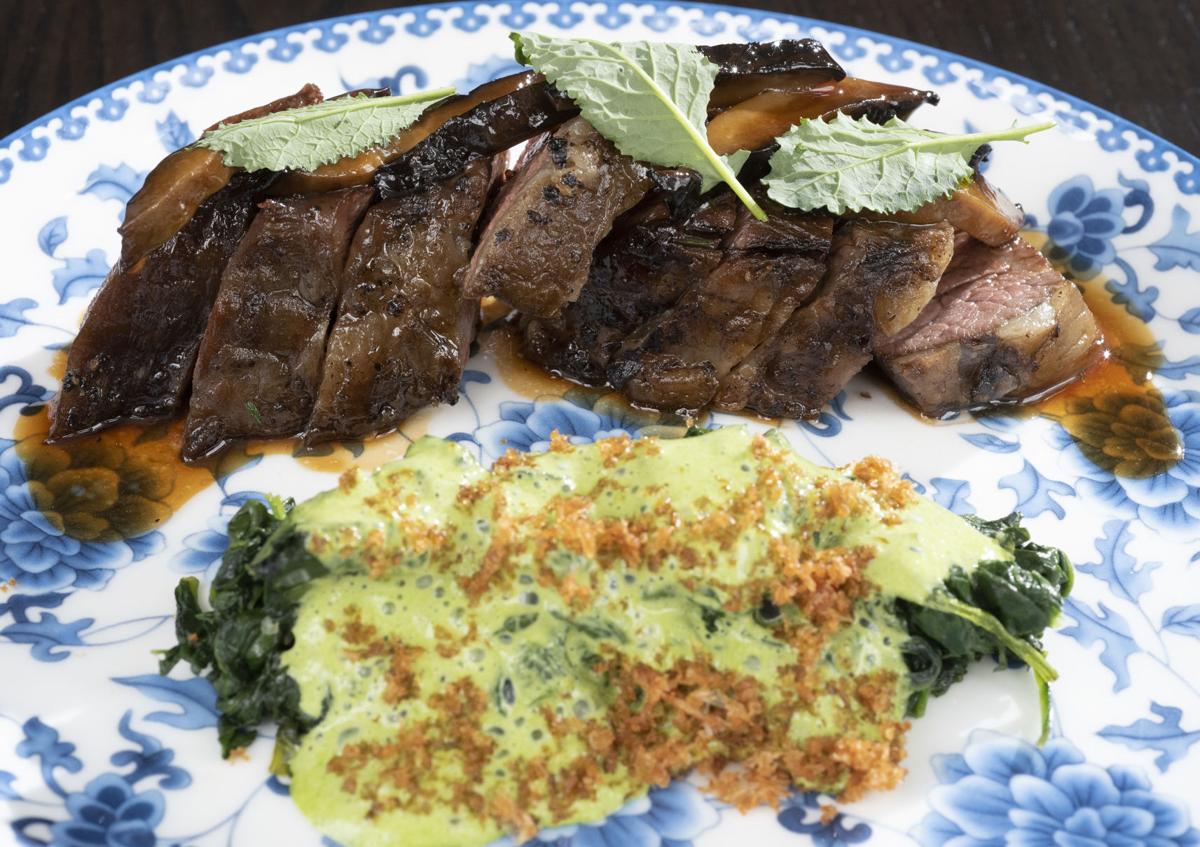 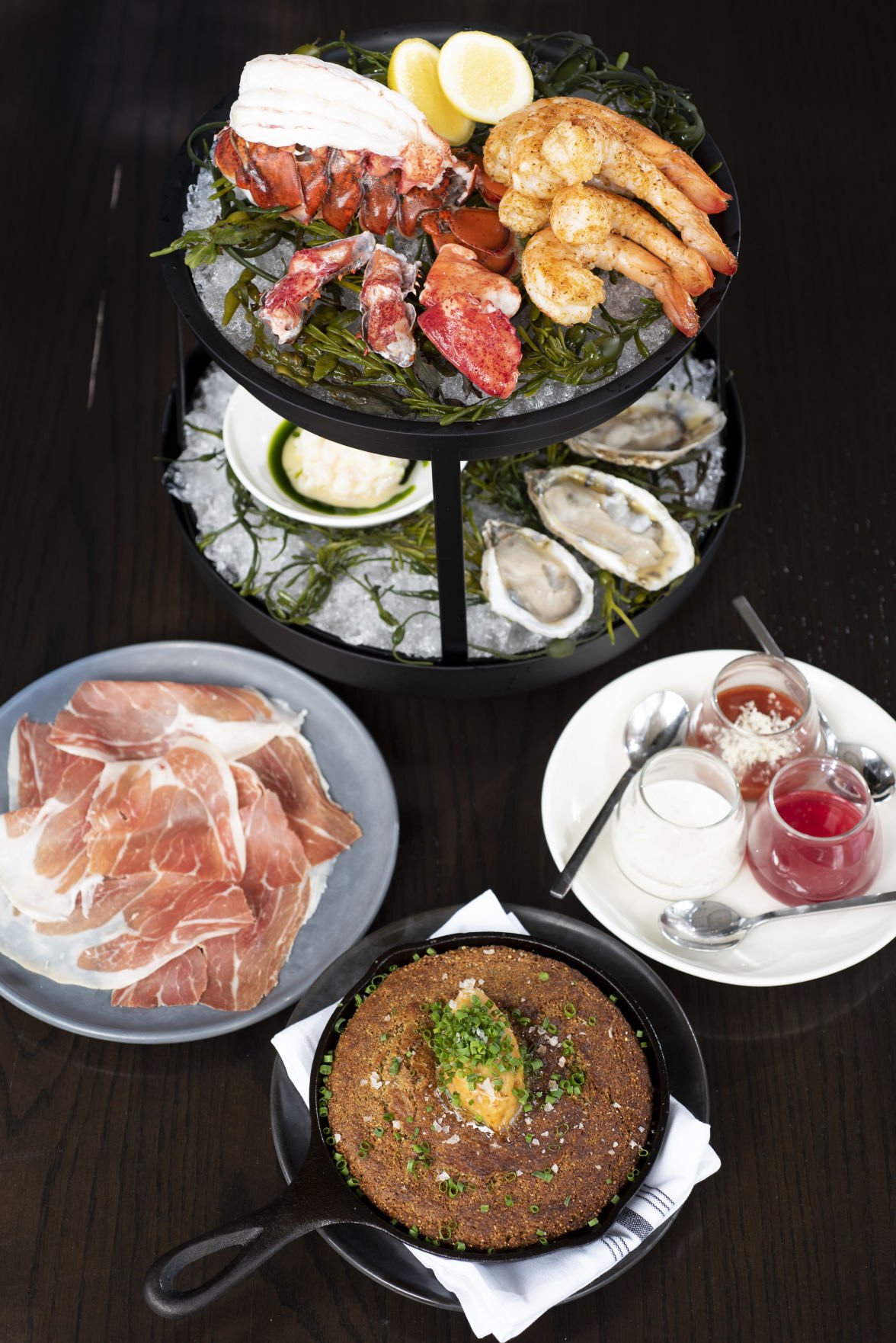 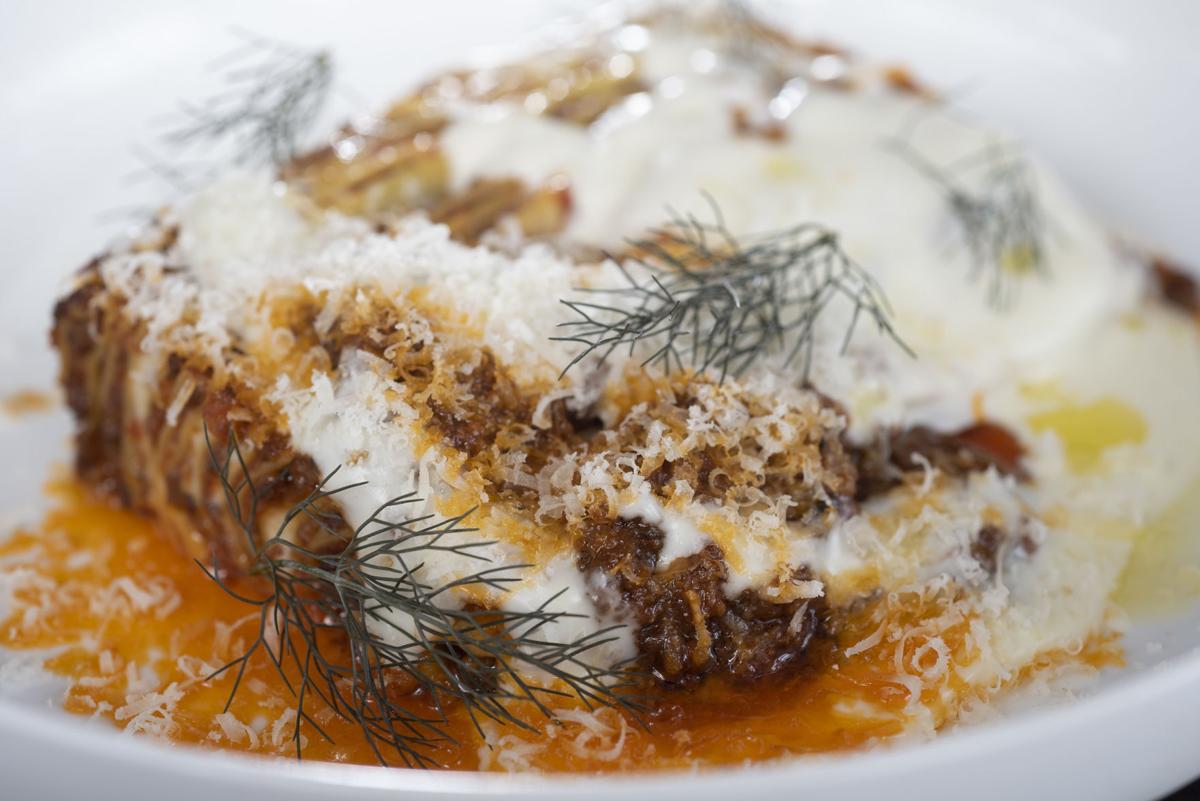 The lasagna, made with smoked brisket bolognese, ricotta fondue and bronze fennel at Thacher & Rye. 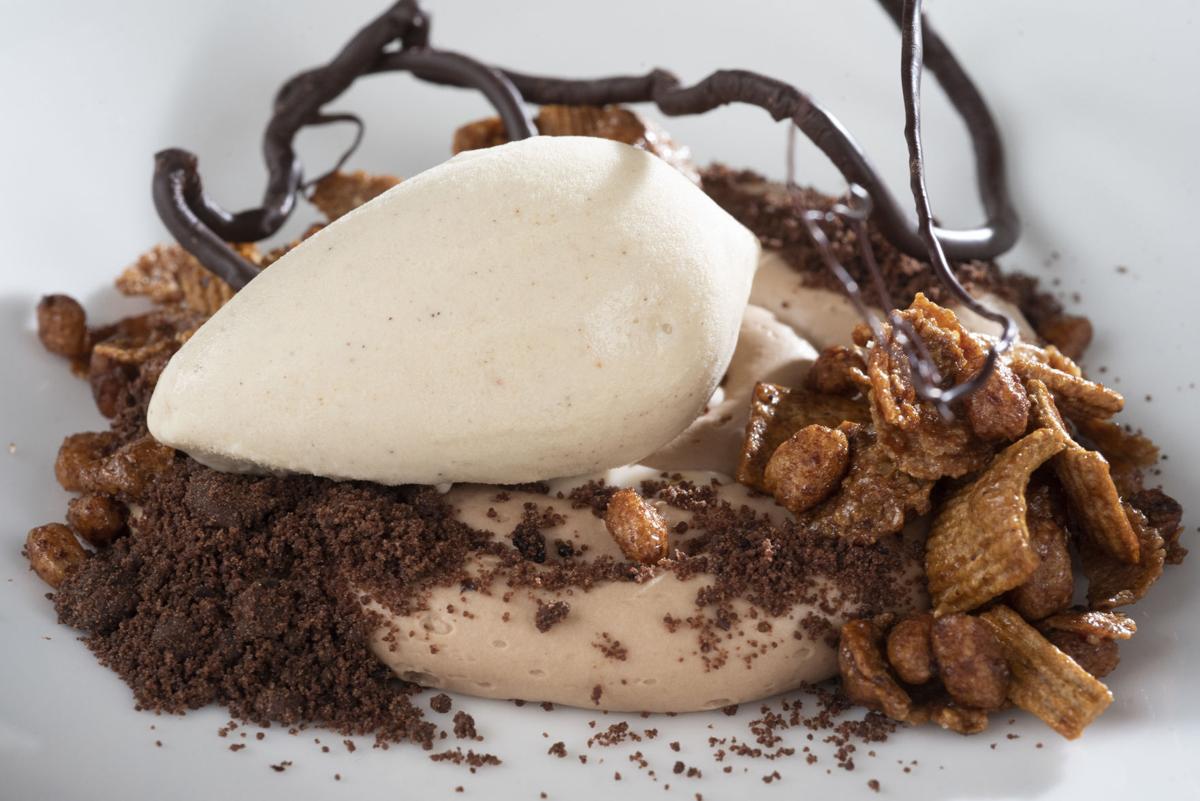 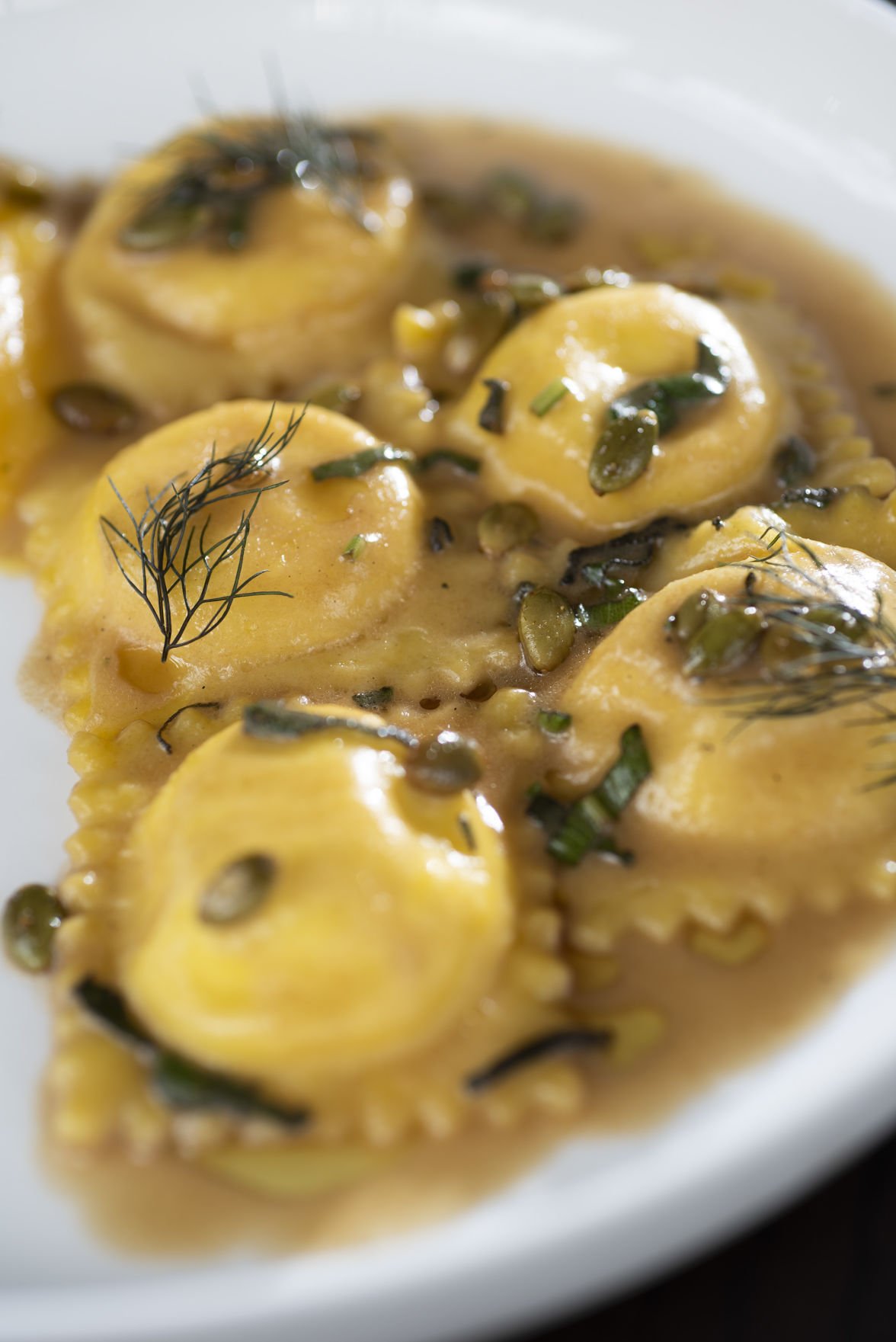 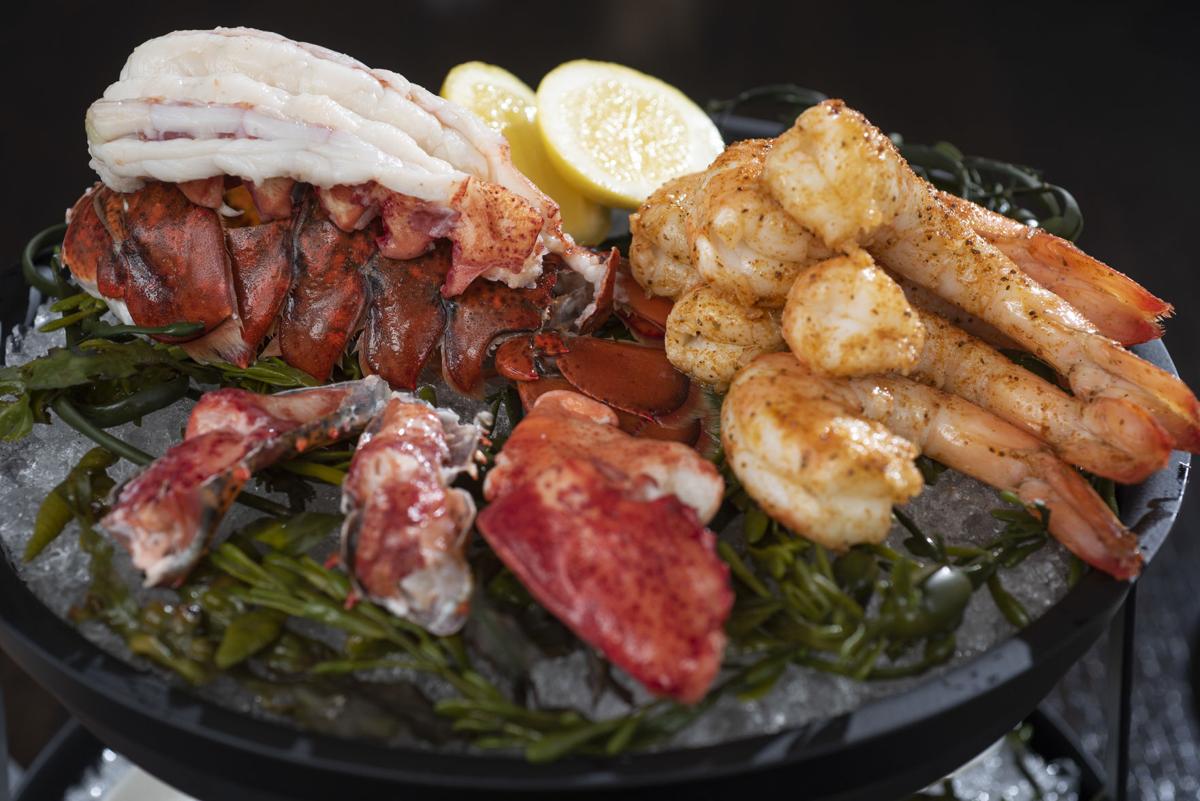 The seafood tower, a first course dish, at Thacher & Rye. 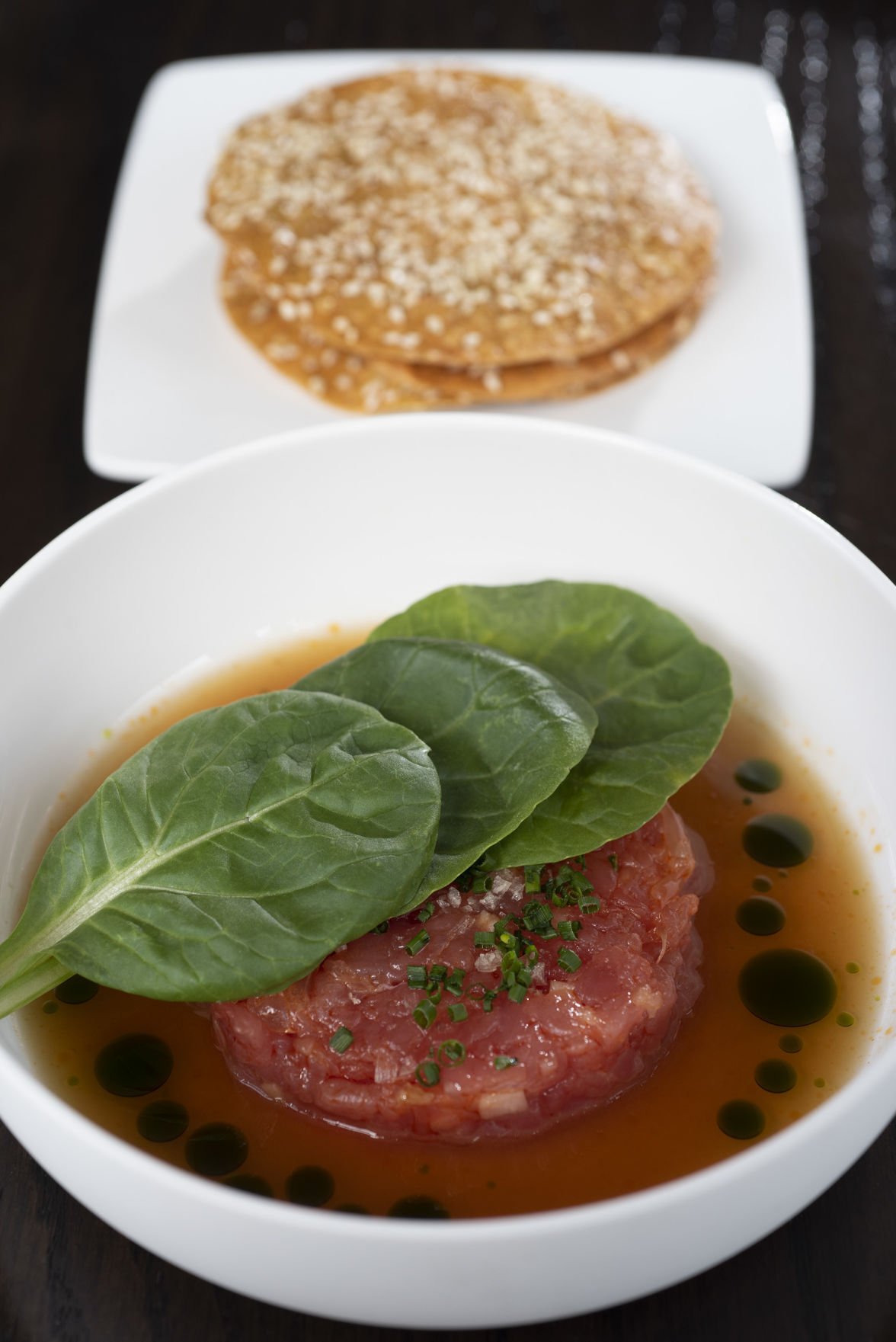 The yellow fin tuna crudo, with grapefruit ponzu, tatsoi and daikon radish, served with a sesame lavish, at Thacher & Rye.

The lasagna, made with smoked brisket bolognese, ricotta fondue and bronze fennel at Thacher & Rye.

The seafood tower, a first course dish, at Thacher & Rye.

The yellow fin tuna crudo, with grapefruit ponzu, tatsoi and daikon radish, served with a sesame lavish, at Thacher & Rye.

Last Friday, the old Brownstone that once housed Volt restaurant on North Market Street was full again — or as full as it could be with coronavirus restrictions.

With anxious taste buds at his call, Bryan Voltaggio was right back where he belonged, managing the symphony orchestra that is his kitchen, where roughly a dozen cooks work in close concert with one another to provide a maximum dining experience for their customers.

“It’s amazing,” said the 44-year-old celebrity chef and Frederick native. “I am ecstatic to be back at my stove cooking, to be here daily, to bring my team back. Food is fun. We are excited about what we are cooking. The feedback has been great so far.”

The interior has been redesigned. Dinner reservations are accepted, but not required, and there are no more tasting menus. The number of courses have been trimmed from 10, or as many as 21, to a more traditional number (three, maybe four). And the offerings on the menu are completely different, except for the signature goat-cheese ravioli.

“If it wasn’t on the menu, they’d be upset,” Voltaggio said, referring to his clientele at Volt whom he hopes to lure to his new place.

But the whole premise behind Thacher & Rye is attracting a new type of customer, one that would show up for more than special occasions, like birthdays and anniversaries.

“The long dining experience and the tasting menu and something that involves multiple steps of service is just not what people are looking for right now,” Voltaggio said. “They want something a little more simplistic, recognizable and comforting in a lot of ways.”

Even before the coronavirus pandemic closed the doors of Volt in March, the wheels of reinvention were already spinning in Voltaggio’s mind. That’s not uncommon for someone who can turn a seemingly random batch of ingredients into an award-winning dish.

Was the lavish dining experience he was offering — a 10 to 21 course affair that could stretch on for more than three hours — still best for business?

Tables were not being turned over to new customers quickly, and some might have been turned off by the wait times for a table or length of the meal.

“I am a father with three kids,” said Voltaggio, who named his new restaurant after his son, Thacher, and Maryland’s “powerhouse” rye industry. “I’ve got sports. I’ve got this. I’ve got that going on. I can’t sit down for dinner for 3½ hours anymore. I understand it.”

So, for the last seven months, the top chef and his staff have worked at creating “more of an everyday, neighborhood restaurant,” he said.

There are fewer courses. The size of the portions have been increased, and there are common items, like burgers, on the menu.

To meet the changing demand, Thacher & Rye will begin offering takeout service in the coming weeks. That’s something Voltaggio was unable to do with Volt because of the style of food.

“The quality is still there. But the experience of making [the restaurant] more accessible is what I want it to be,” he said of his new place.

In keeping with a practice he established at Volt, Voltaggio also wants Thacher & Rye to have a distinctly local flavor. All of the ingredients are as locally sourced as possible, and the drink menu features area breweries and distilleries.

“Volt was more for special occasions, and I feel this is more conducive to going out when you get home from work or when you don’t feel like cooking,” said Karlys Kline, a prominent community volunteer in Frederick who had dined at Thacher & Rye as part of the restaurant’s soft opening in recent weeks.

Thursday’s grand opening, which begins at 3 p.m., will be a more formal, celebratory affair. There will be a ribbon cutting, and Voltaggio and Mayor Michael O’Connor are among those scheduled to speak.

“I have been here for a long time cooking,” Voltaggio said. “I wanted it to be a restaurant that was really part of the downtown dining scene and wanted it to be more of an everyday experience for everyone.”

Navigating the health protocols necessitated by the pandemic has been a challenge. Voltaggio can only fill roughly 60 percent of his restaurant to maintain social distancing, even though the county allows for up to 75 percent. He’s also worked overtime in acquiring heaters for the outdoor space he hopes to maintain during the upcoming colder-weather months. It proved to be more challenging that expected.

“It was sort of like finding toilet paper at the height of the pandemic,” said Voltaggio’s business partner Carrie Delente, who owns the building the restaurant occupies.

Among those dining outdoors on the patio on a mild evening last Friday were Ed and Peggy Haser, who moved to downtown Frederick from Carroll County, in part, for the type of experiences that restaurants like Thacher & Rye offer.

“We are thrilled to have [a Voltaggio restaurant] back,” said Peggy Haser, who dined at Volt with her husband before it closed.

Family Meal, Voltaggio’s other restaurant in Frederick, closed down when the pandemic hit and Voltaggio said the future of the East Street spot is uncertain, leaving only Thacher & Rye for the time being.

And for Peggy Haser, while the food and the overall experience were different at the new restaurant than at Volt, she said, “It felt normal.”

That is precisely what Voltaggio is seeking with Thacher & Rye.

What: Grand opening of Thacher & Rye

More info: A formal, celebratory affair that is open to everyone, no reservations required. The open house from 4 to 5 p.m. is for self-guided tours of the restaurant. There will be complimentary small plates, featuring items from the menu, as well as cocktails, and wine and beer available to purchase. The dress will be casual, and masks will be required. A ribbon cutting is planned, and owner Bryan Voltaggio and Frederick Mayor Michael O'Connor are scheduled to speak.

Family Meal, a favorite in the Frederick restaurant scene, never reopened its doors after closing in March due to the effects of the coronavir…

Not sure how the future of Family Meal is “uncertain” when there was a Liquor Board hearing scheduled for this week for “Born & Raised” at the Family Meal location. I get that the focus of the article was Thatcher & Rye, but I assume checking out public hearing notices is a standard part of the reporting process.

I like Mr. Voltaggio’s restaurants. I liked Range, Family Meal, & Volt. The food was always top notch & the service matched. Undoubtedly, I will try out Thatcher & Rye, you should too.

He owes too many local businesses money.

He does? Name names. You’re making an incendiary accusation without any evidence to back it up.

I went to the link provided. Nothing there. Just a generic court case search engine.

MrSniper put his name in and you will see all the cases against him. Plus he will not be honoring the Volt and Family Meal gift cards since Family meal is changing names as well. Bad business overall.

Really?? Why would the FNP give this guy all this space after he continually goes out of business? His food is ok and pricey for what you get. Ask anybody. There are many other restaurants that deserve to be reviewed than this.

His celebrity status attracts tourists who may spend money elsewhere as well.

It's a Grand Opening of a new restaurant, of course they are covering it, sheesh.

The restaurant business is a tough business, especially at this time JerryR. Sixty percent of restaurants don't make it past their first year and 80 percent go out of business within five years, and that was pre-CoViD. Bryan Voltaggio has exceeded that survival rate, and the loss of Volt was directly related to the pandemic. Granted, his food is "pricey" and sometimes strange, but it has always been good. As Deb says, Voltaggio is a celebrity chef (how many times have we seen him on TV?), so him opening a new restaurant that is designed around the CoViD restrictions is a tourist attraction. Good on him.

I believe his sister had to declare bankruptcy because of his terrible business management - which was in the FNP a while back. Yes, the FNP features other restaurants, but none with this type of coverage. His restaurant is "Meh" at best!