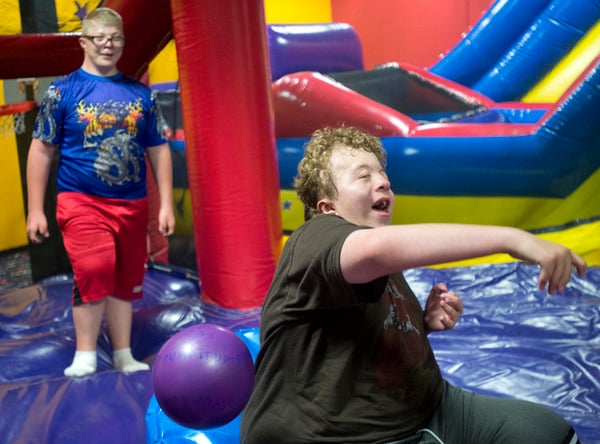 Connor McNeil, right, plays Sunday at Pump It Up in Frederick during his 16th birthday party. Shown at left is Connor’s friend, Jacob McGrath, who flew from California for the event. 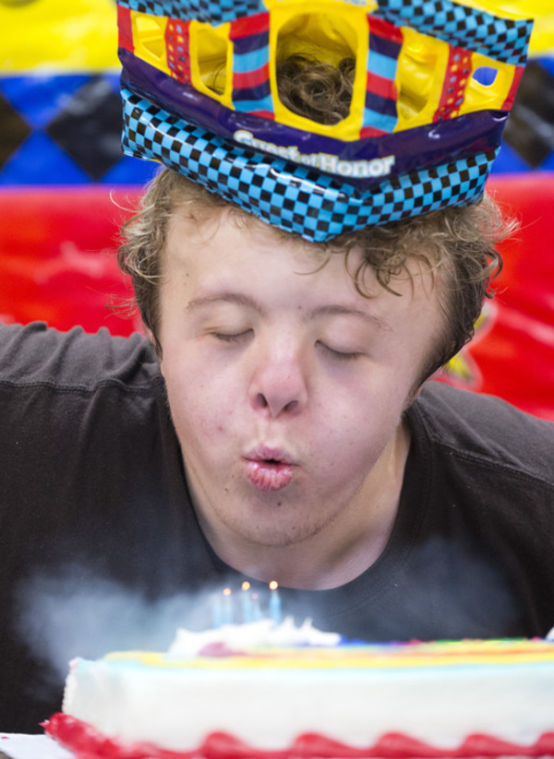 Connor McNeil blows out the candles on his cake Sunday during his 16th birthday party at Pump It Up in Frederick.

Connor McNeil, right, plays Sunday at Pump It Up in Frederick during his 16th birthday party. Shown at left is Connor’s friend, Jacob McGrath, who flew from California for the event.

Connor McNeil blows out the candles on his cake Sunday during his 16th birthday party at Pump It Up in Frederick.

Connor McNeil held court over his audience Sunday, taking his seat at Pump It Up on a throne in front of a small throng of onlookers who diligently watched as the 16-year-old opened gift after gift.

There was a Barnes and Noble gift card, followed by another for iTunes. There were DVDs for "The Three Stooges," "Transformers" and a pancake pan that prompted Connor's mother, Donna Arthur, to mention her son's love of baking.

“He's been wanting that,” Arthur said.

But perhaps no gift was sweeter than the presence of Connor's longtime pen pal, Jacob McGrath, 13, who flew from California with his mother, Laura McGrath, so the boys could finally meet. The two boys share a rare condition called Carpenter syndrome that causes the skull bones to fuse together prematurely, as well as other possibilities, including abnormalities with fingers or toes and obesity, according to the National Institutes of Health. People with the condition may also face intellectual disabilities.

Connor, whose birthday is today but who celebrated with friends and family at Pump it Up off Gas House Pike on Sunday, was excited to finally meet Jacob.

“I can't believe it,” Connor said.

Jacob got his first plane ride out of the deal. He said it was special to meet Connor so “that I could see someone that was just like me.” The statement brought tears to family members' eyes.

It's fitting that the two boys, who share a love of technology and computers, met as the result of a connection made between the boys' mothers over Facebook. Connor has had about 20 surgeries related to his condition, most of which occurred before he turned 3, Arthur said. The condition is so rare — there are only about 70 cases reported in scientific literature, according to NIH — that neither Arthur nor Connor had met someone else with the condition in person before.

McGrath said she's learned of about five other cases in the United States online. Initially, the idea was to have everyone gather in the same place, but that idea evolved over time.

In addition to computers, the boys also share a love of food and yard sales. The boys will spend much of the week visiting, with a train trip planned to Washington today to visit the Smithsonian's National Zoo. The boys also like trains.

“We both have a favorite sport in common, which is baseball,” Jacob said.