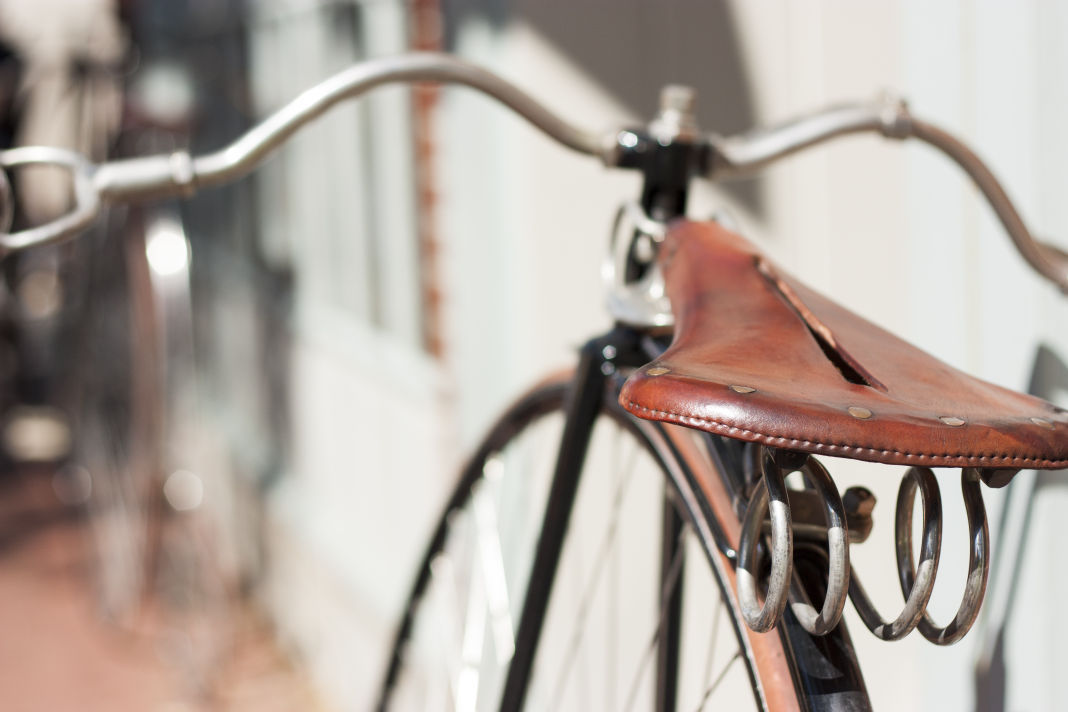 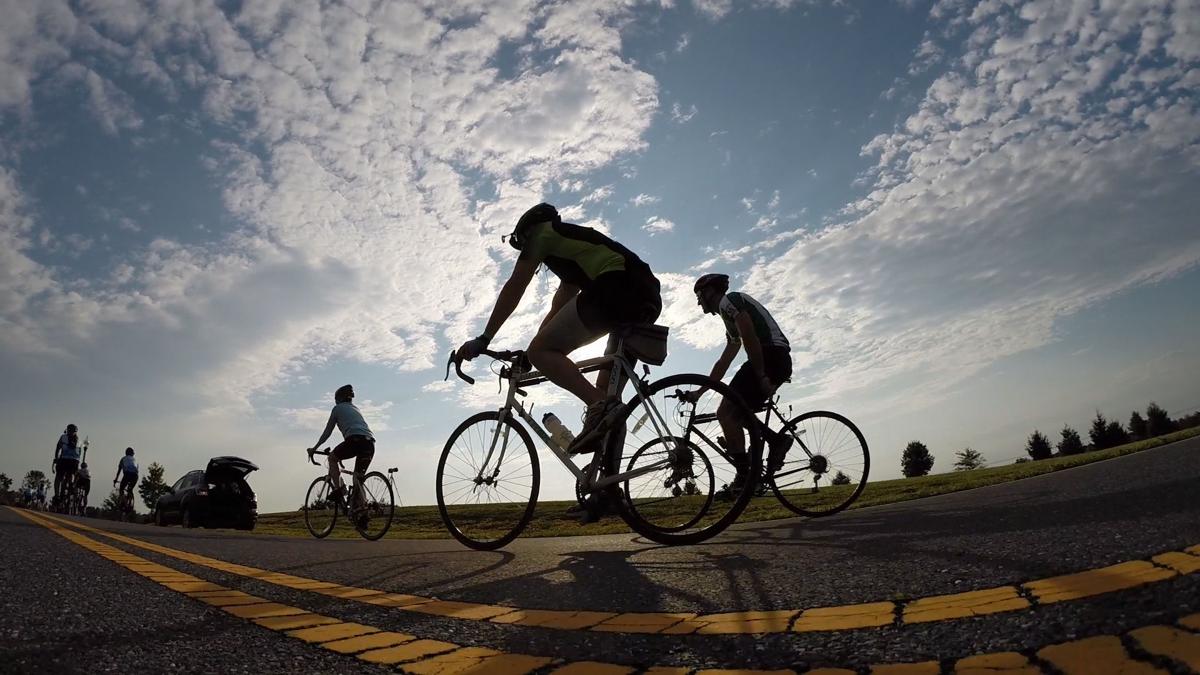 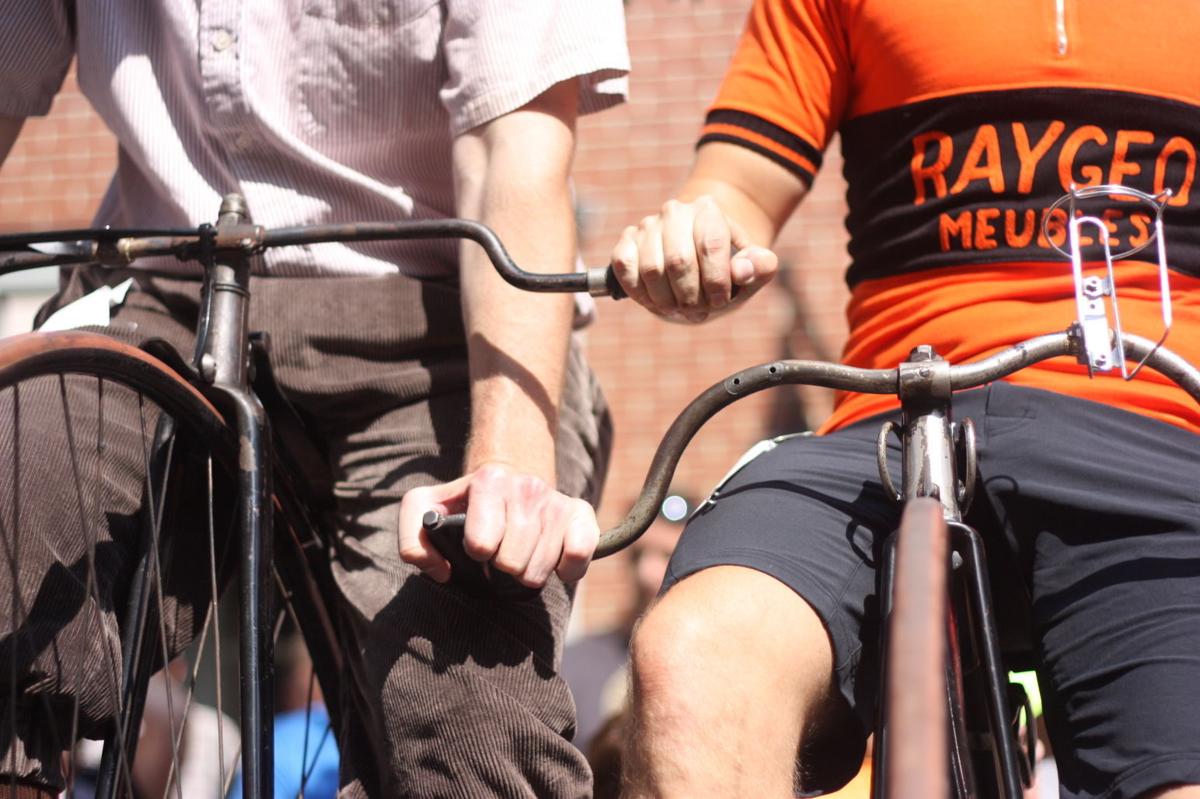 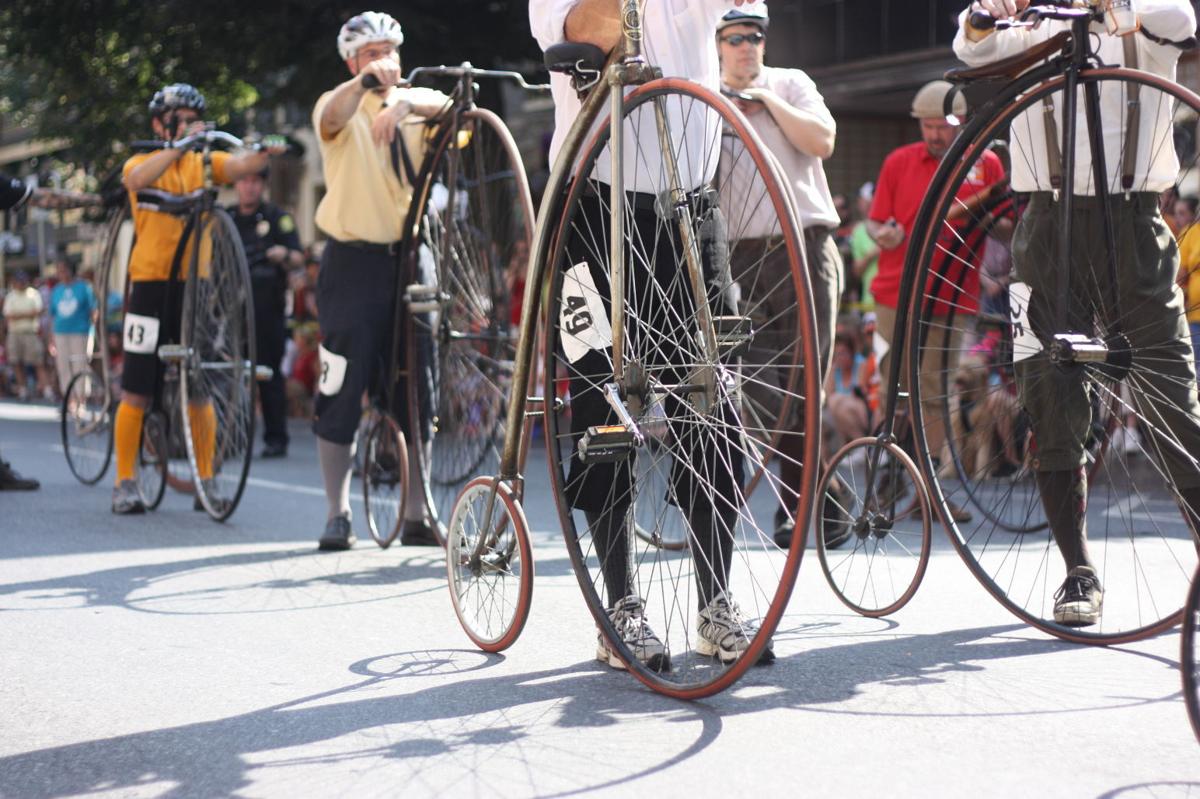 The National Clustered Spires High Wheel Race will be held Saturday in Frederick. 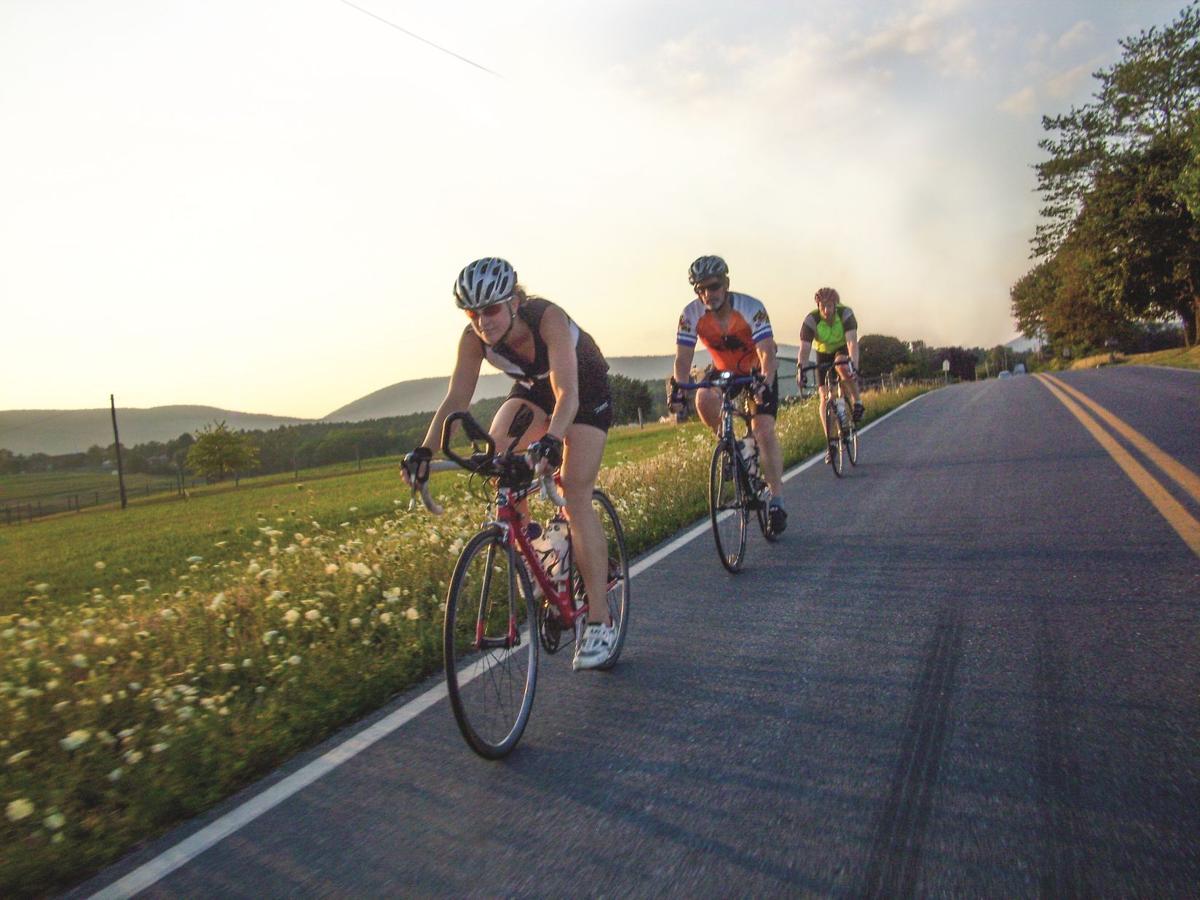 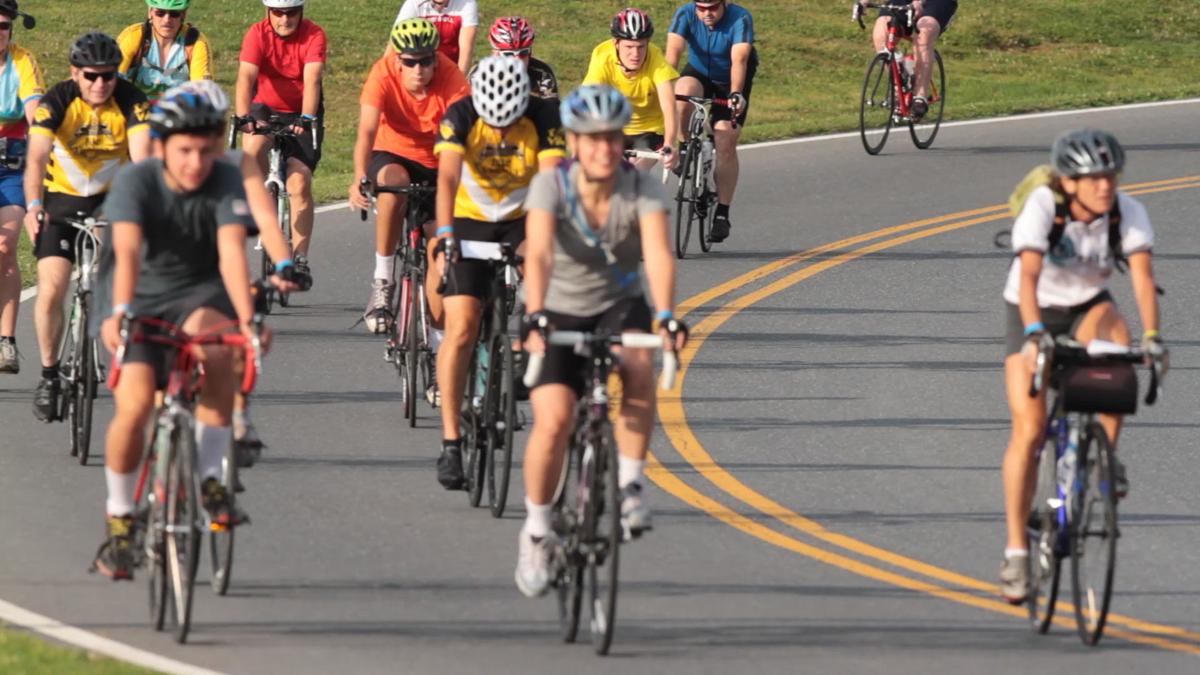 The National Clustered Spires High Wheel Race will be held Saturday in Frederick.

From the 1880s through the 1910s, Americans took to the bicycle, giving birth to a national craze that only passed with widespread production of Ford’s Model-T.

In fact, turn-of-the-century roads were not built for cars but for politically influential cyclists tired of riding in rut-prone dirt and mud tracks left by horses and carriages. Tragically perhaps, many of these early bicycling pioneers — manufacturers and hundreds of bike mechanics and their shops — eventually turned their two-wheeled businesses into enterprises built around the new, motorized form of transportation.

But what is good naturally comes back around.

Now in its fourth year, the popular Frederick Clustered Spires High Wheel Race, inspired by those grand old machines of yesteryear, returns to downtown Saturday. If you haven’t caught the event before, it’s not to be missed. Thirty racers on restored and replica high wheelers tear around a .4-mile loop starting on North Market Street for an hour, vying to see who can complete the most laps. The record remains 42, completed by Rick Stumpf in 2012, but several riders have come close to breaking the mark in succeeding years and there’s no reason Stumpf’s effort won’t be challenged again.

(Quick aside: A terrific, recently opened exhibit at the Smithsonian Institution’s National Museum of American History in D.C. traces both the industrial genius behind the early human-powered machines and their compelling social history.)

Beyond the pure fun of watching otherwise mature adults dress in period costume and race improbably tall bikes around the block like kids — High Wheel organizers expect several thousand to line the course again Saturday — there’s also a bunch of other high wheel bike-related events this weekend. Late Friday afternoon, from 6 to 6:30 p.m., there’s a Meet the Racers public event at the Carroll Creek Promenade near the Delaplaine Center, where race participants, who come from all over the country, will display their rides, provide mounting and dismounting demonstrations, and show off a couple of throwback riding tricks.

On Saturday from 3:30 to 5:30 p.m., City Hall will host an antique bicycle display, including authentic 19th-century bicycles provided by members of The Wheelmen, a national nonprofit dedicated to keeping alive the heritage of American cycling. Also, at 4 p.m. Saturday, prior to the official 4:20 p.m. main event, there will be a high wheel race for kids on smaller bikes.

And if that was the extent of the bicycling highlights this weekend, along with the regular Frederick Pedalers group rides in the area, and the occasional Potomac Pedalers and Baltimore Bicycle Club rides that venture up this way, that’d be a great weekend for cycling enthusiasts.

But the second weekend in August also marks the sixth annual Tour de Frederick — another popular, multi-day affair that continues to grow each year — and another indication of the resurgent interest in bicycling across the U.S.

“The partnership with the Tour de Frederick has helped with corporate sponsors and enabled us to enhance the race and whole event,” said Rhodes. “We’ve been able to buy a new sound system, for example, this year.”

Rhodes, who has raced BMX, cyclocross, mountain and road bikes in the past, bought his first high wheeler about nine years ago, attracted by the novelty and history of the unique bikes. “I’ve taken it out twice on the C&O Canal recently, riding down to Georgetown and then, from Cumberland to Ohiopyle State Park [in Western Pennsylvania],” Rhodes said. “It’s a workout,” he added with a laugh. “I also got a feeling for what it was like for people to ride high wheel bikes on those rougher paths back in the day — not as rough probably as what they rode on, but definitely not as smooth as the roads we are used to.”

The Tour de Frederick, launched in 2010 by Spokes magazine publisher Neil Sandler to bring the local bicycling community together and help promote Frederick County’s rural beauty, is expected to draw 500 participants this year. The three-day event begins with an 8-mile Frederick History Loop on Friday afternoon, led by cyclist and local historian George Ruszat, and offers a variety of supported rides over the weekend, including everything from a 10-mile family ride to metric and full century rides on Saturday, and a 36-mile covered bridge tour on Sunday.

The century ride will cross four covered bridges and pass through the Gettysburg National Battlefield Park as well as traverse several miles on an old Native American trail. The metric century hits some of same lightly traveled roads and crosses through two of Frederick County’s three covered bridges, as well as the 1900-built Legore stone arch bridge.

“Last year, the Tour de Frederick raised $70,000. It’s the largest fundraiser for the Boys & Girls Club of Frederick County,” said tour director Carole Heine. “This year our goal was to net $100,000. So far, our riders have raised [through individual and fundraising teams] about $48,000 and with generous corporate contributions and in-kind sponsors, we’re getting close. We want to have a successful event and grow the Boys & Girls Club — right now we don’t have space for high school kids, and we want to start those types of programs.”

Heine noted that almost a dozen kids from the Boys & Girls Club of Frederick County will participate in the children’s High Wheel Race, and another half-dozen, who have been training this summer, will join Saturday’s scenic, 31-mile recreational ride.

“I guess I am surprised by the way the Tour de Frederick has taken off over the years — when we raised $7,000 for the Boys & Girls Club [the first year],” Sandler said. “It’s just been embraced by the community. The volunteers and sponsors — from banks making donations and local restaurants stepping up to host rest stops on the rides — it just amazes me. Maybe that’s what happens when you put a good nonprofit, whose mission people think is important, with a good event.”

The bottom line, Sandler said, is getting people to come out and participate. Join one of the bike rides, get your kids out on their bikes on one of the family rides, he said, and then go watch the high wheelers for free.

“I think it’s become one of the best weekends for bicycling anywhere,” Sandler said. “When we started, they [the county] said, ‘Go pick a weekend that’s dead, where’s nothing’s happening.’ Well, that’s what we did. In the middle of August, Frederick is usually pretty quiet. But Saturday, you won’t be able to get a table at a restaurant downtown.”

The TdF registration fee for riders ages 11-17 has been reduced to $5. Youth riders must be accompanied by a registered adult.

The TdF has become the biggest fundraiser for Boys & Girls Club of Frederick County. Cyclists can choose to either raise funds as part of a team, or they can pay a flat registration fee only. Details and registration are available at www.tourdefrederick.com

New this year, there will be a children’s high wheel race just prior to the big event. All high wheel events begin and end on Market Street in front of Brewer’s Alley.

This year’s Tour begins at 2 p.m. Aug. 14 with an eight-mile history loop. The ride, led by seasoned Frederick historians, begins and ends at the Delaplaine Visual Arts Education Center on Carroll Creek. This ride will take approximately two hours and is a good ride for riders of all abilities. There will also be the opportunity to meet some of the high wheel racers that evening to get a true close-up of their amazing machines.

Rides on Saturday range from a 10-mile family ride, a 36-mile club ride, a 64-mile metric century and a 101-mile century, which will enter parts of southern Pennsylvania and historic Gettysburg. All of this year’s rides will be less hilly than last year, which crossed over into Middletown Valley.

Saturday’s rides, which begin and end at the Delaplaine Arts Center on Carroll Creek, are designed to end early enough for riders to attend a Finish Line Party BBQ and then walk into downtown to view the high wheel race activities which begin at 4 p.m. and run until 6 p.m. Antique bicycles will be on display in front of City Hall before and during the race.

Sunday’s ride will be Maryland’s most well known ride, the Covered Bridges Ride, beginning and ending at Utica District Park just off Rt. 15 on Old Frederick Road. The 36-mile loop will cross over all three covered bridges plus a rest stop at Loy’s Station Covered Bridge.

For more information or to register for this year’s events, go to www.tourdefrederick.com.

All Friday and Saturday rides begin and end at the Delaplaine Center, 40 S. Carroll St., Frederick.

Larry has a separated shoulder and some lacerations. Otherwise he is okay. He is up and walking around today. Slowly, I am sure.

Anyone know how Larry Black is? He took a hard spill in the High Wheel race. Thanks.