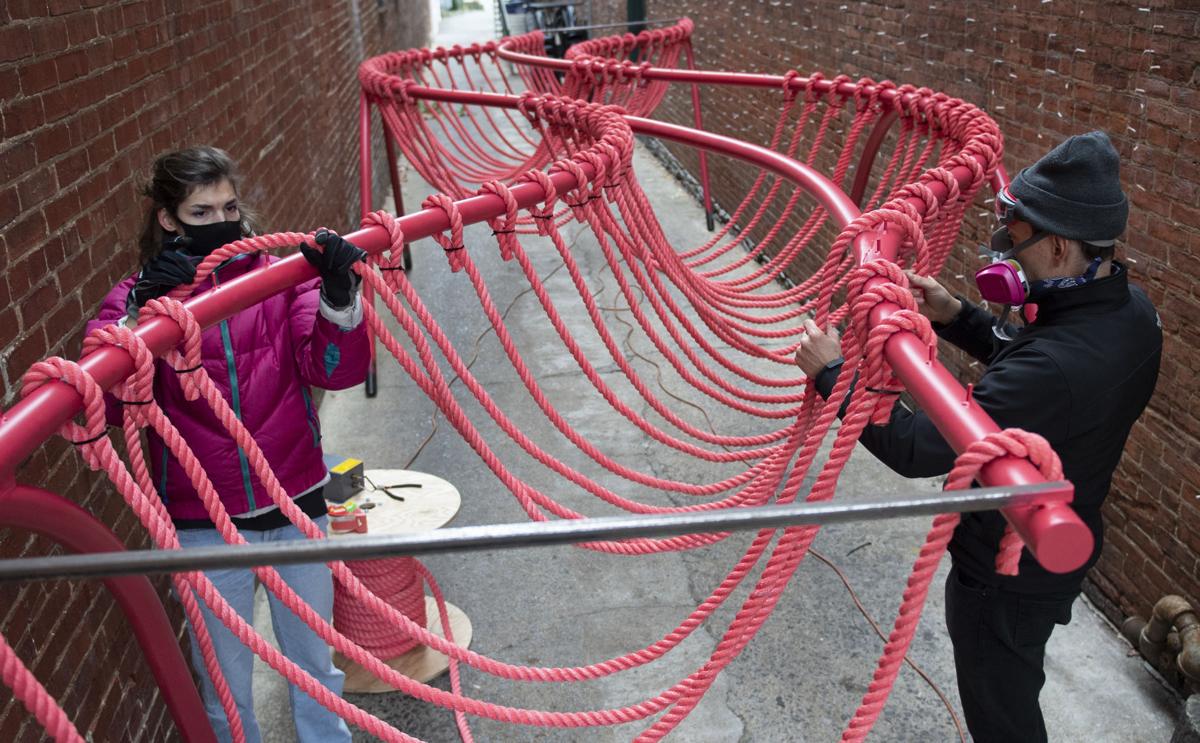 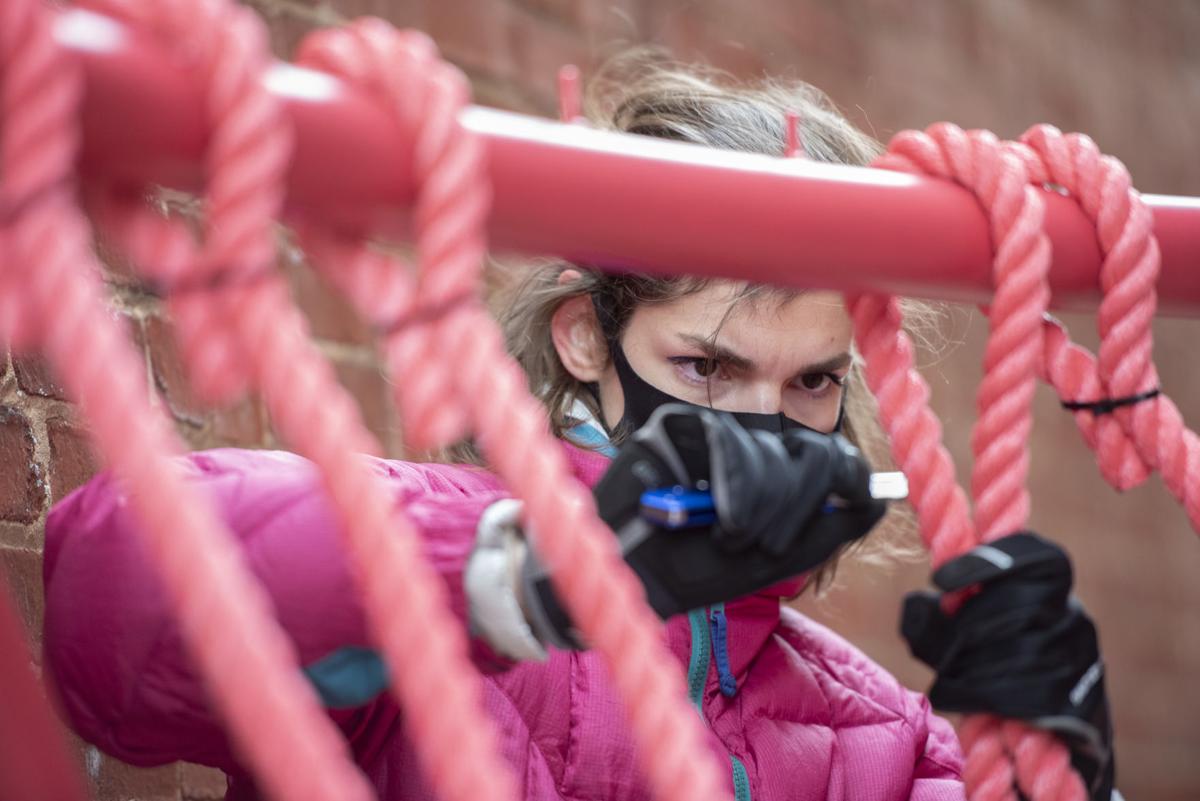 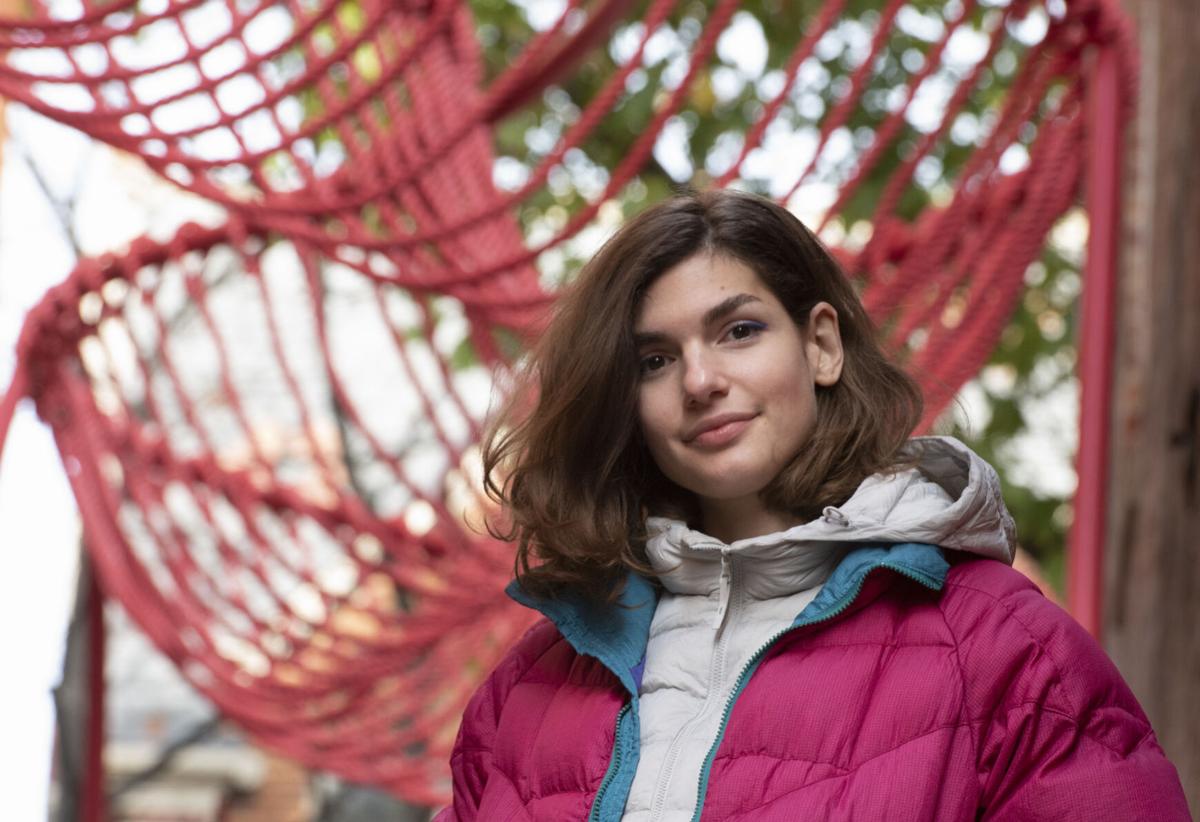 Kiki Goti, of Brooklyn, New York, is shown in front of her art installation, titled Happy Stripe, which is part of the Downtown Frederick Partnership project unchARTed. 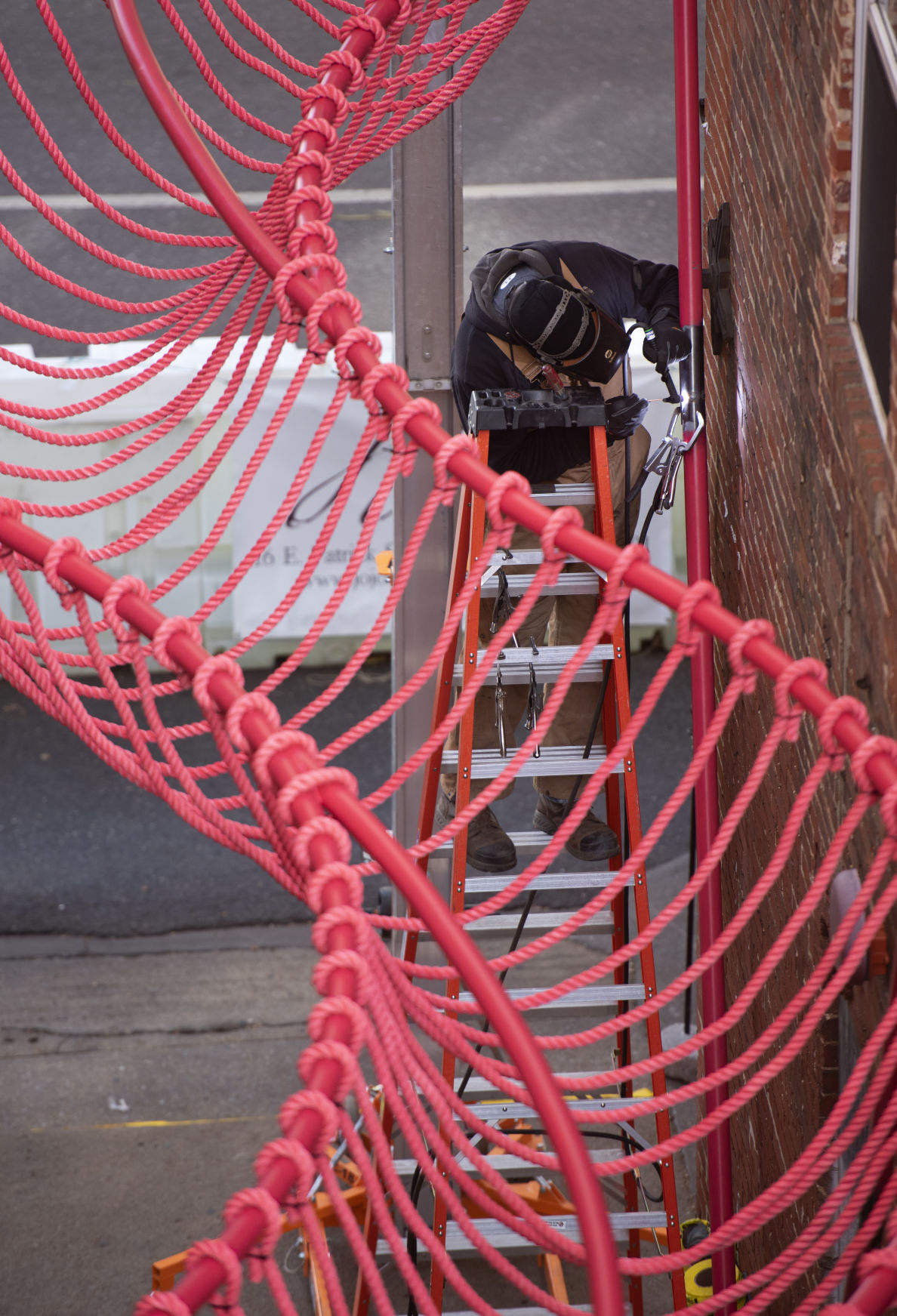 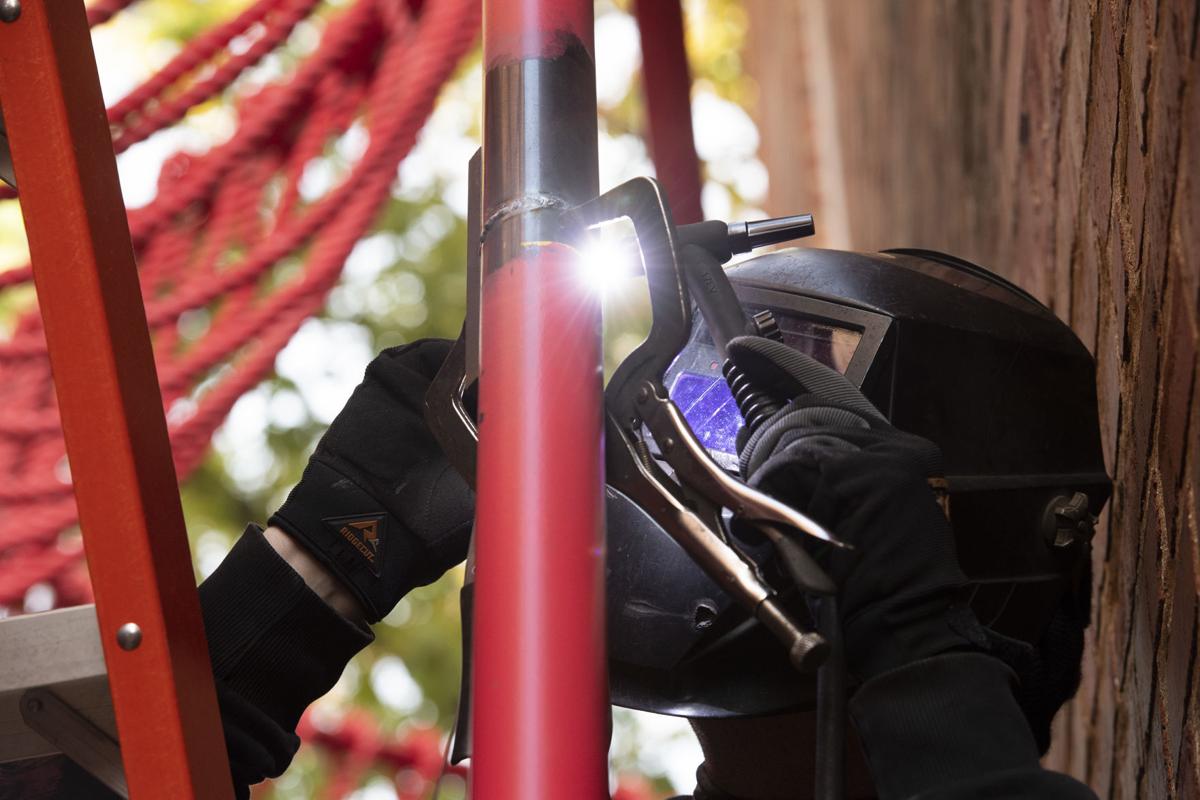 Steven Rumbaugh welds two sections of pipe during the installation of a piece by Kiki Goti. 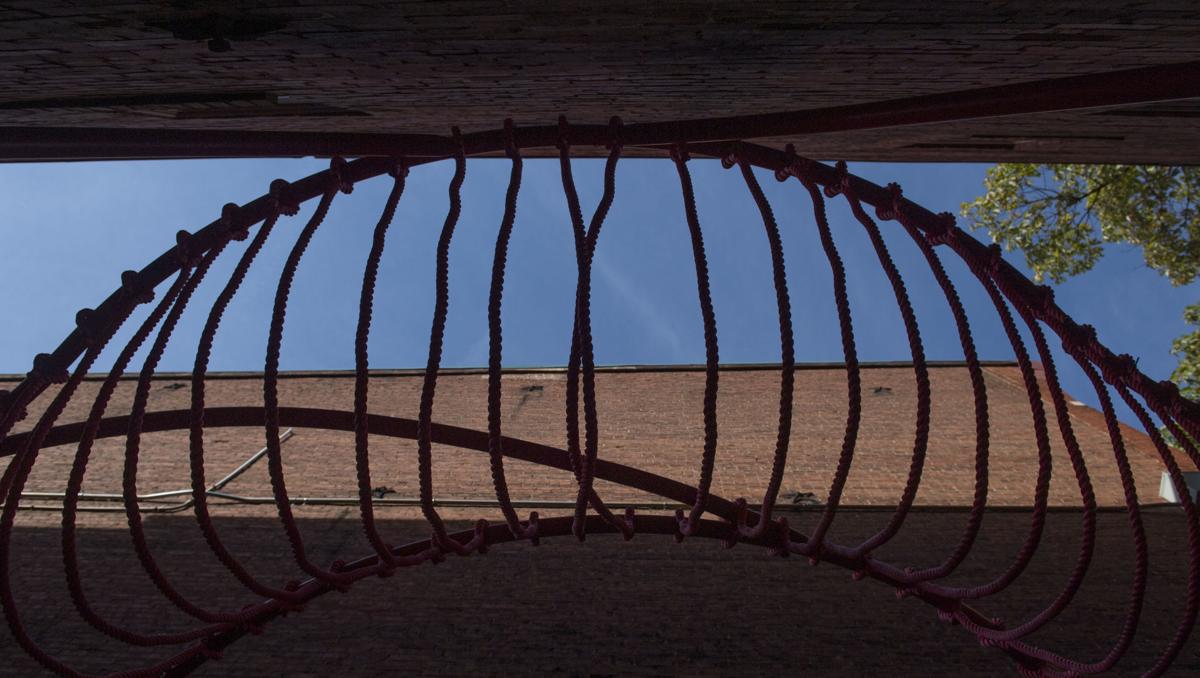 A view looking up from directly beneath artist Kiki Goti’s installation titled Happy Stripe, which is part of the Downtown Frederick Partnership’s unchARTed intiative. 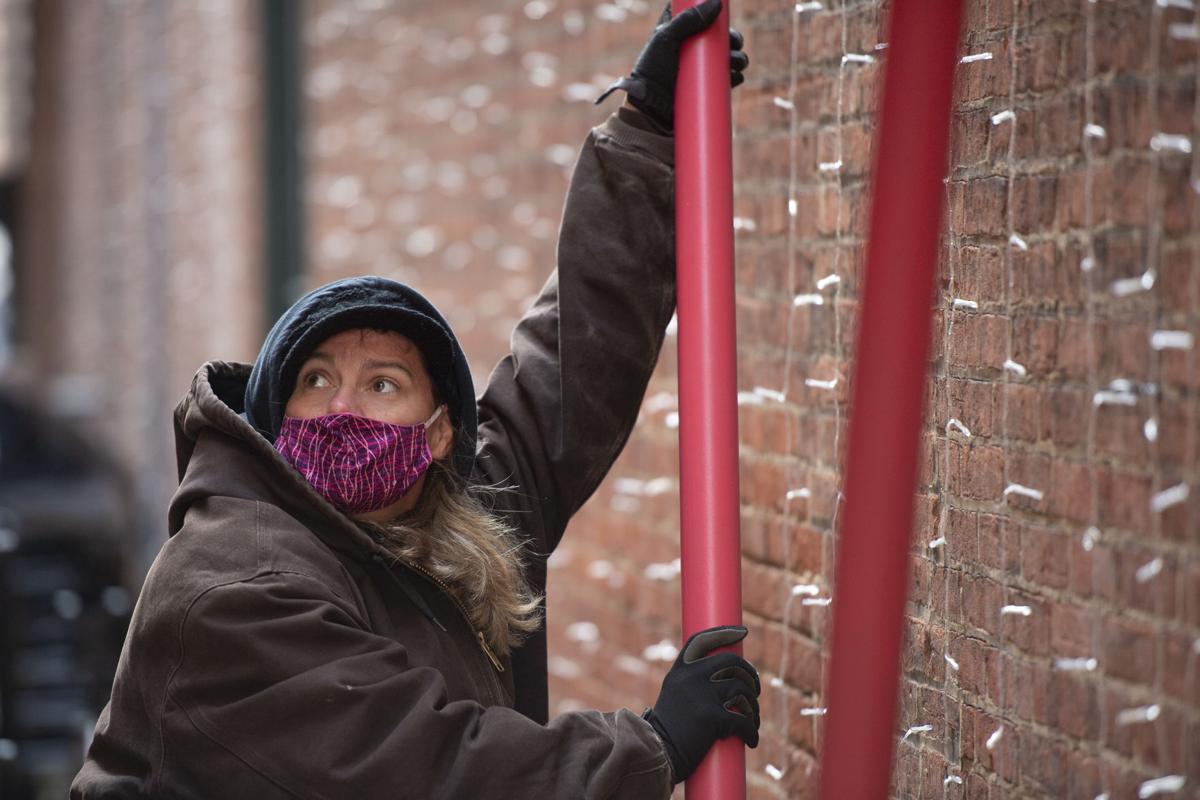 Krystle Rumbaugh, of Fire and Wire Welding, secures a pipe while her husband Steven welds two other sections together during the installation of a piece titled Happy Stripe in a downtown Frederick alley. 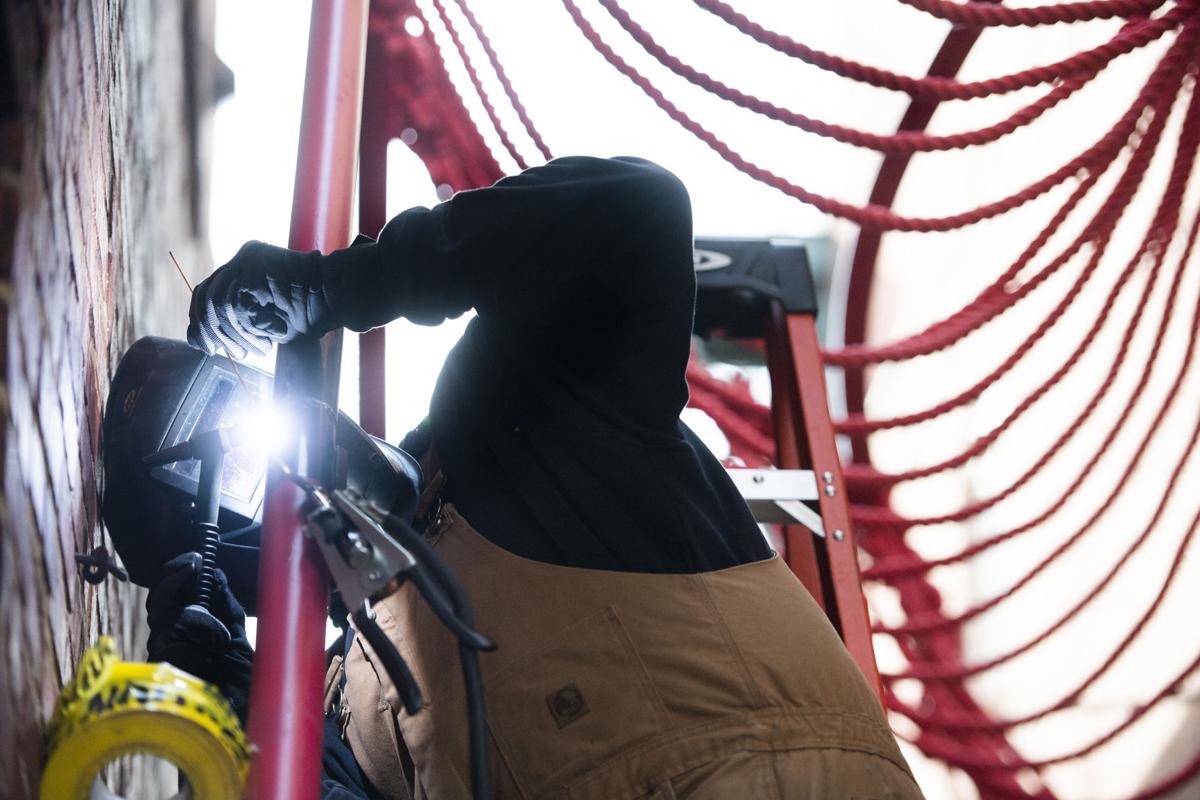 During a vacation to Chattanooga, Tennessee, Kara Norman discovered a design competition to enliven public spaces, an idea she decided to bring back to Frederick.

Long after that discovery, Norman, the executive director of the Downtown Frederick Partnership, watched the installation of a new piece of public art this week in an alley along East Patrick Street in Frederick.

“We were looking at ways to activate our alleyways and encourage people to travel a little further, to explore a little farther,” Norman said Thursday morning as the structure was being assembled next to JoJo’s Restaurant & Tap House.

“It’s a fluke that I happened to be there on a family vacation and happened to see [the design competition] and then later happened to meet the staff person who planned it.”

The idea Norman brought back evolved into a project called unchARTed, which was launched in November 2019 and is now seeing the first of three public works aimed at engaging downtown visitors in a way an otherwise unexceptional alley would.

Goti, who is originally from Greece and also teaches at the Carnegie Mellon University School of Architecture in Pittsburgh, hopes her piece — and the two that have yet to be installed— will help people feel more comfortable being out in public.

“For me this kind of project is — especially right now during the pandemic — I think it’s important to just encourage people to again use public space because we got so afraid of being in public for so long,” she said. “So we wanted to have something that is going to kind of like, attract people to go and pass through the alley.”

On Thursday morning, Steven Rumbaugh of Fire & Wire Welding, with the help of his wife Krystle Rumbaugh, scaled a ladder and welded together the wframe, which would then be bolted into the concrete walkway.

Goti said she was pleased to contract with a local firm to do the fabrication and welding portion of the project.

The entire piece has a pinkish red color, which Goti said was chosen as a way for the piece to stand out from but not contradict the deep reddish-brown of the surrounding brick facade.

For pedestrians walking on the south side of East Patrick Street, the installation will be difficult to miss. A portion of the brightly-colored frame protrudes out over the sidewalk, beckoning for passersby to engage with the artwork.

“I just hope they have fun with it,” she said. “I’m sure some people are going to love it, [and] some people are gonna be like, ‘What exactly is this thing?’ But I just hope that it’s intriguing enough for them to go and check it out, take a photo with it [and], you know, maybe think about what the space was before.”

Unlike a lot of public art, Happy Stripe also offers a virtual experience by way of a phone app called Happy Stripe AR.

The app uses a phone’s camera to create an augmented reality feature that allows users to toss virtual balls into the structure, which then roll through the curvy-linear design. Goti said her design studio collaborated with Jeffrey Anderson and Ahmad Tabbakh of the New York-based design firm Mancini Duffy.

Originally, the app was intended to be a sort of guide to a now-canceled festival that would have introduced and highlighted the three public works. But as with so many plans during the era of COVID, things changed.

“So we ... changed the goal of this,” Goti said. “Kind of like a virtual version of our structure, more of a game that creates kind of like a digital community, brings people together, but at the same time being distant and being safe.”

The two yet-to-be installed works will be in the alleys leading to the Carroll Creek Parking Garage and the C. Burr Artz Public Library.

The installation that will lead to the library is titled Maxwell Flow and was designed by Graham Coreil-Allen of Graham Projects in Baltimore.

The other is called Colorful Frederick and was designed by Volkert Inc., which has offices around the country and will be installed by Morgan-Keller Construction.

Both remaining pieces are slated for installation by spring.

The original idea was for all three to remain in place for one year, but because of the COVID-related delays, the timing of how long each will be on display has yet to be settled.

The unchARTed design competition and installation was sponsored by Downtown Frederick Partnership in cooperation with the Potomac Valley Architecture Foundation, AIA Potomac Valley and the Frederick Arts Council.

Goti, who is 30, said Happy Stripe is only her second public piece of art; her first being for a design festival in Los Angeles.

“I’m really happy to see that places like [Frederick] really make an effort and care about the public space and care about art,” she said. “And you know, do their best honestly to bring things here and kind of like, make this urban environment much more vibrant and happy.”

One may rightfully ask why these public entities (or entities receiving public money) think this is a better expenditure than funding underfunded infrastructure, actual housing, repairing bridges, or environmental protection (all functions that these various entities should be doing as a primary function).

The Frederick Arts Council get their funding in part from National Endowment for the Arts, Maryland State Arts Council, and the city and county of Frederick.

What percentage of tax payer money went into this and other projects like this/ Who knows. But looking at some of the sources o funding, I'd suggest they have better areas to spend their resources (our tax dollars) on. How about putting more funding to schools to teach the children financial concepts so they can better recognize good uses of limited resources and poor uses of limited resources? Buying more PPE for first responders would have been a better use of public funds.

I like it. Brightens up a dull alley. I can't think of anything more dreary than a city enslaved to its history, unable to break free from the styles of 100 or more years ago.

What happens when a kid starts playing on this and gets tangled up or even worse. Bad, bad idea.

It's too high for that to happen.

Looks cool. These are the kind of things that make an historic place like Frederick a living place, today.

'"So we wanted to have something that is going to kind of like, attract people to go and pass through the alley.”' Amusing because, good things always happen to tourists in alleys....glad a local firm did the construction!

I can appreciate the recent artwork additions to the downtown, but they totally clash with the historic theme of the city. Can you imagine adding art like this to Gettysburg? Hope not.

Guessing the Mayor was able to sell the Flying F logo for some spare change for this 'art'?

How much did we pay this person from New York for this horrendous, fluorescent pink, macrame monstrosity? How does this "art" garbage (remember the dinosaurs) get okayed downtown but the historical society can deny shutters, windows, etc?

I agree. How much did this cost and who paid for it? Did the City of Frederick pay for this? Put the money toward paying for rent, mortgages, and food for people who are out of work. Sorry, but this is not a time for frivolous, unnecessary spending. By the way, did people quarantine or self-isolate for the specified time after all of the travel that’s mentioned (New York, Tennessee)? If not, it’s a terrible example.