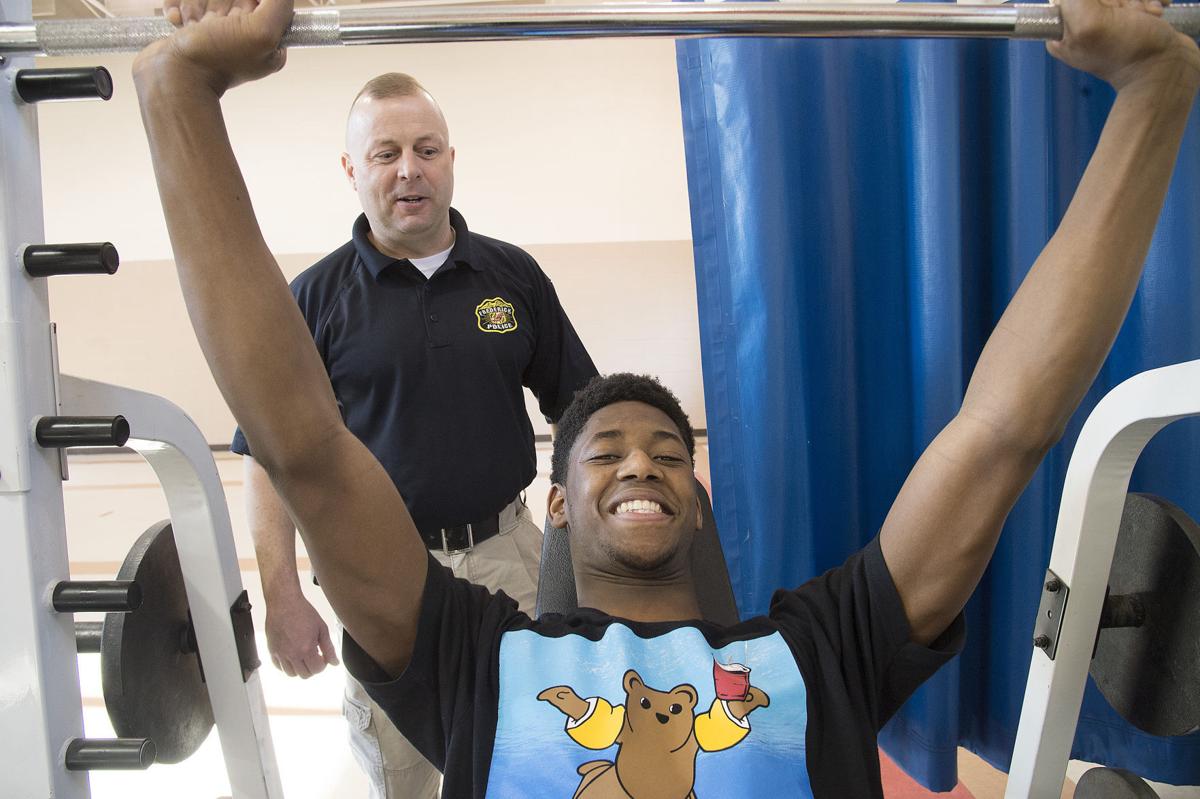 ABOVE: Melique Jeffrey, who has been participating in the Police Activities League in Frederick, lifts weights under the watchful eye of Officer Michael Figgins of the Frederick Police Department. BELOW: Jeffrey, left, and Figgins. 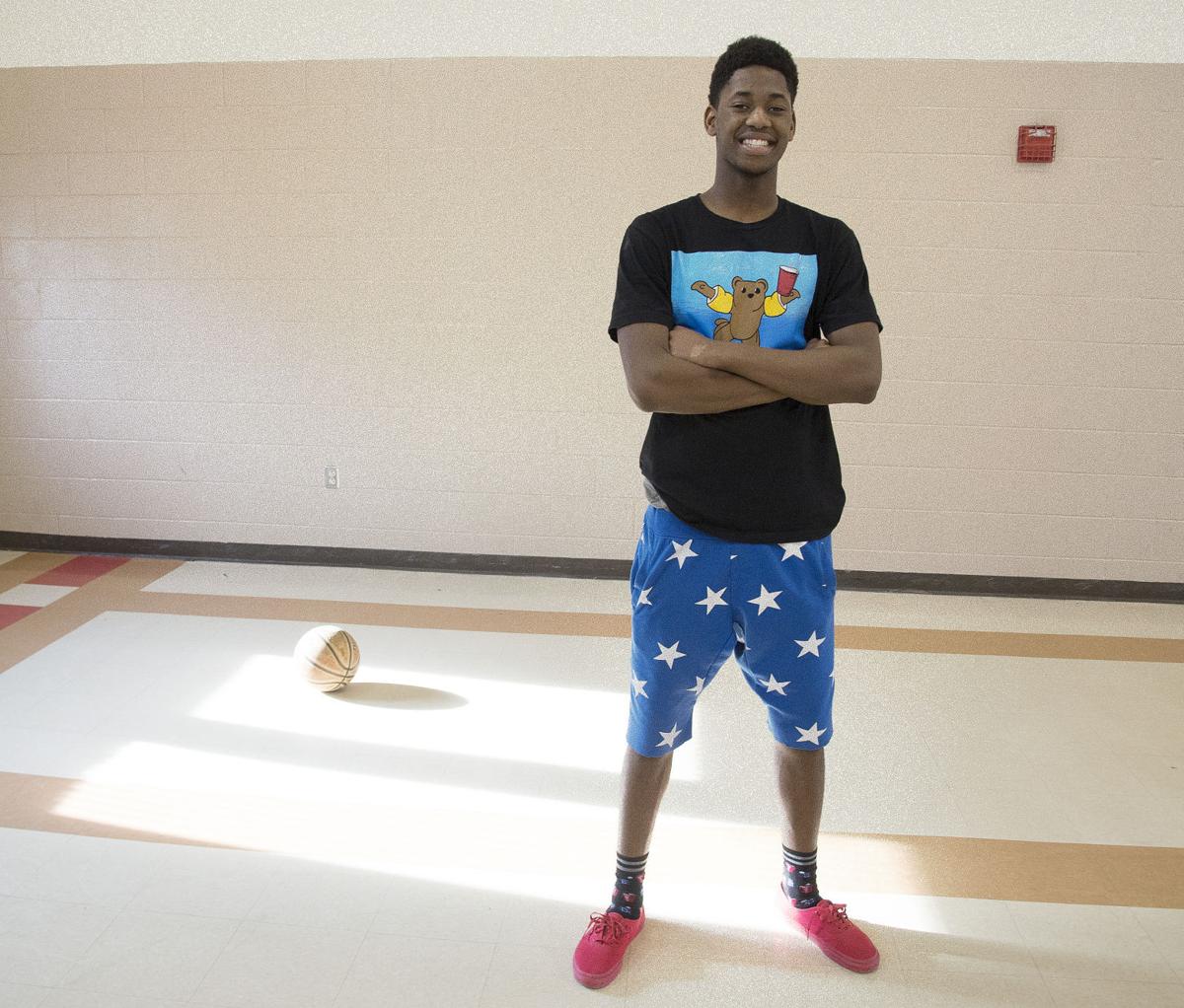 Melique Jeffrey has been participating in the Police Activities League in Frederick. 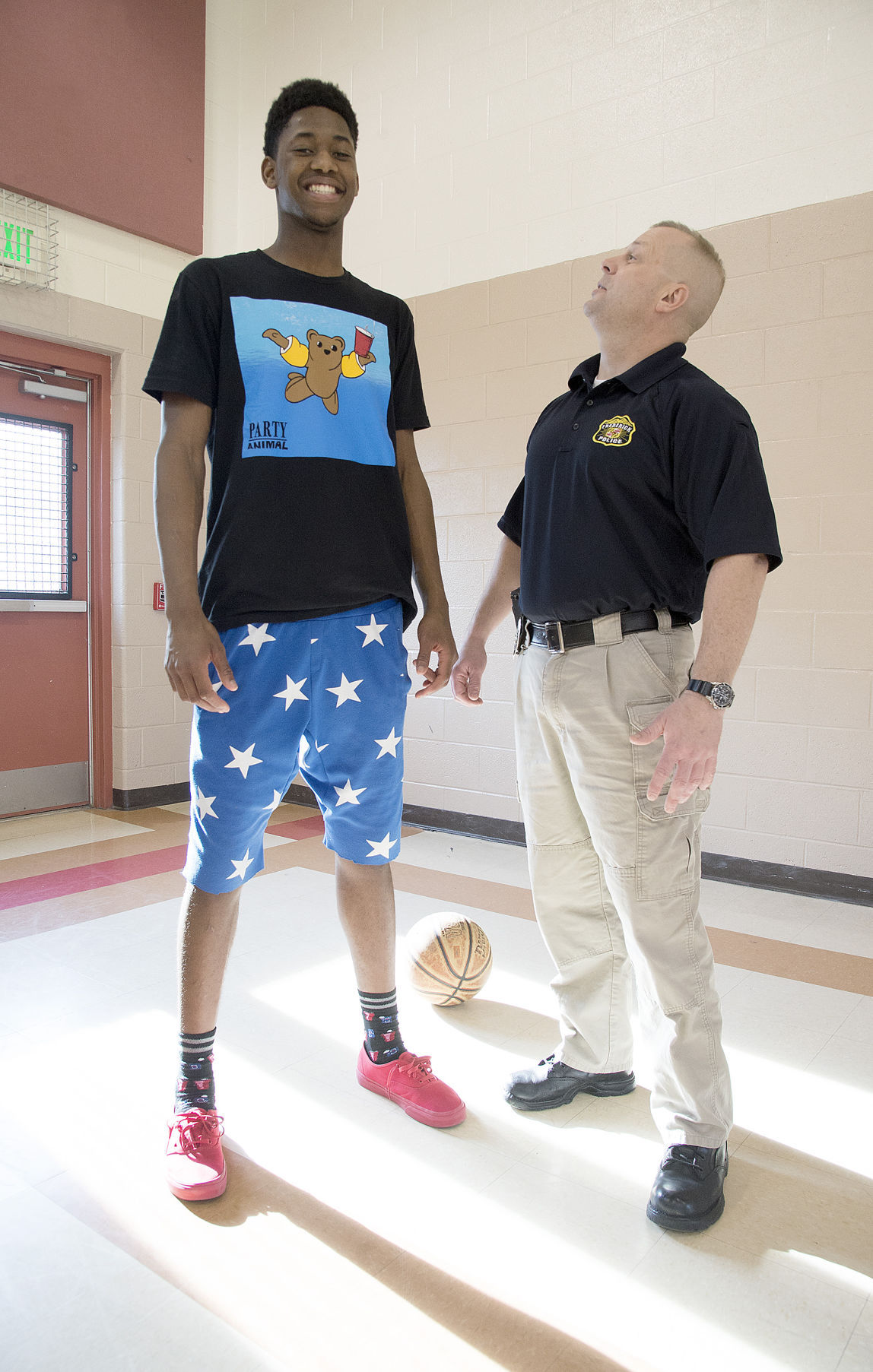 Melique Jeffrey, left, who has been participating in the Police Activities League in Frederick, with Officer Michael Figgins of the Frederick Police Department. Figgins looks up at Melique after a visitor pointed out the height difference between the two.

ABOVE: Melique Jeffrey, who has been participating in the Police Activities League in Frederick, lifts weights under the watchful eye of Officer Michael Figgins of the Frederick Police Department. BELOW: Jeffrey, left, and Figgins.

Melique Jeffrey has been participating in the Police Activities League in Frederick.

Melique Jeffrey, left, who has been participating in the Police Activities League in Frederick, with Officer Michael Figgins of the Frederick Police Department. Figgins looks up at Melique after a visitor pointed out the height difference between the two.

When Melique Jeffrey learned last month that he would attend Alderson Broaddus University on a football scholarship, quite a few people celebrated with him.

Melique, an 18-year-old preparing to graduate from Gov. Thomas Johnson High School, was introduced to the Police Activities League when he was 12. His family had moved into Lucas Village, one of five low-income rental properties run in the city by the Housing Authority of the City of Frederick, a nonprofit private corporation.

The PAL program is designed for those 8 to 18 years old, to keep them out of trouble. Melique said it taught him the importance of concentrating on his studies along with athletics.

"Originally, I just wanted to come here and play basketball," he said with a laugh. "But in order to play basketball, first we had to do our homework. ... So that just helped me out so much because, for me, I was never the sort of person to do my homework."

"They had a few requirements, but they [the board] were able to offer a scholarship to help him attend the program as long as he kept his grades to, I think it was a 3.5 [grade-point average] and maintained good behavior at school, things like that," Figgins said.

Melique cites his experience at the Team USA camp — which included meeting coaches and scouts from area colleges and universities — as a huge source of motivation.

"I ended up having Georgetown [University] talk to me and tell me how they thought I could make it to the next level," Melique said. "I remember that really boosted me and encouraged me to keep on trying to make it to college, to play football in college."

Melique was thrilled with the prospect of playing for a college team. His mother, 49-year-old Nolar Jeffrey, was just as excited to hear that her son's education would cost only about $3,400 after the scholarship package he received from Alderson Broaddus.

"As a single parent, I've already sent one child to school with student loans and by working day and night," Nolar Jeffrey said. "So this is very exciting. I'm so proud of him. His whole family is. And now he will be able to focus on keeping his grades up."

When Nolar Jeffrey moved to the U.S. from Trinidad and Tobago in 1999, she took 1-year-old Melique and his two older siblings with her. Melique's father refused to move and the two separated, she said.

Struggling to make ends meet, Nolar Jeffrey attended the Everest Institute about 10 years ago to secure higher-paying work as a medical assistant with a doctor's office. She landed the job, but the boost in pay came at the cost of financially debilitating student loans.

"I did it so that I could get a higher pay," she said. "So that, ultimately, I could get Melique what he wants, get my daughter what she needs and to provide for my children, but I still have a couple thousand dollars to pay off, so I was really looking at different options for [Melique]."

Looking back on what her son accomplished, Nolar Jeffrey was thankful for community programs that helped him get there.

"The PAL program really helped Melique a lot in growing not just mentally but physically, because they were right there and they always looked out for all the other kids in the program," she said. "I would recommend it to everyone."

In spite of Melique's success, the PAL program could use a hand, said Jennifer Koselak, the PAL board president.

Of the seven board members, none have children who regularly attend PAL's programming, Koselak said. The board has broached the topic of reaching more parents from the Lucas Village community, but the topic has remained a discussion point until recently, she said.

"We have had a challenge with that, so one of the things that we are currently doing is we are taking a survey. We're asking the community specifically, 'What are the challenges for you and how can we help?' and 'What are the times that work best for you to talk about these issues?'" Koselak said.

Nolar Jeffrey said she would love to take a more active role in programs that helped her children so much, but the reality of long work hours and the pressures of being a single parent often make that impossible.

"Well, I wouldn't mind, but I'm only off on Mondays and every other weekend, so if they can work around my schedule ..." Nolar said with a laugh. "I really don't have a lot of free time. I just have to keep going for the kids."

The board meets on the first Thursday of each month at 7:30 a.m. at Lucas Village, a time Koselak admitted was not exactly tailored toward a parent's schedule.

"I've asked about that many times, because my kids get on the bus at 7:30 to go to school, so a lot of days I'm not even seeing them off," Koselak said. "However, for those on the board who are in the business community, they have to be at work by 9 a.m."

Still, Koselak is proud of what the board accomplishes. Each summer, PAL pays for about 40 youths to attend summer camps in the area. The basic after-school program that Figgins oversees can host anywhere from five or six to 35 or more students a day, Koselak said.

Melique is doing his part to encourage the next generation to take advantage of the same opportunities he had.

"Now, the little kids in the PAL — now, they look up to me because I'm now going to college and stuff. They didn't think that somebody from this type of neighborhood could go somewhere big or get an opportunity like this," the senior said, shaking his head in disbelief. "It's crazy."

The Frederick Police Activities League is looking to add members to its leadership board. Anyone interested in joining the board or volunteering with PAL can get more information at www.frederickpal.org.

The Lucas Village PAL program generally runs from 4 to 7 p.m. Tuesday through Thursday at 111 Pennsylvania Ave. PAL programs are open to all city youths ages 8 through 18.

For a more detailed breakdown of the league's programs, or to find out how to donate, visit the league website or email Jennifer Koselak at jkoselak@verizon.net.

Great to hear uplifting news! Many people give back to the communities but it often goes unnoticed. This child of an immigrant has fought through the issues in Sagner and shows all those behind him that it is absolutely possible. Sometimes a little support can go a long way. Thank you PAL and way to go, soon to be high school graduate!

Bravo Zulu! All my newphews are in the police explorer programs because it teaches them that the majority of law enforcement are exemplary public servants.

PAL is a tremendous program and has made huge impact on the lives of children here in Frederick. OFC Figgins has personally invested his time and efforts to expand the reach of the program. FPD is fortunate to have such a dedicated officer who goes above and beyond to make a difference in this community. Kudos to the PAL Board and FPD for dedicating resources to this worthwhile program! Congratulations Melique!