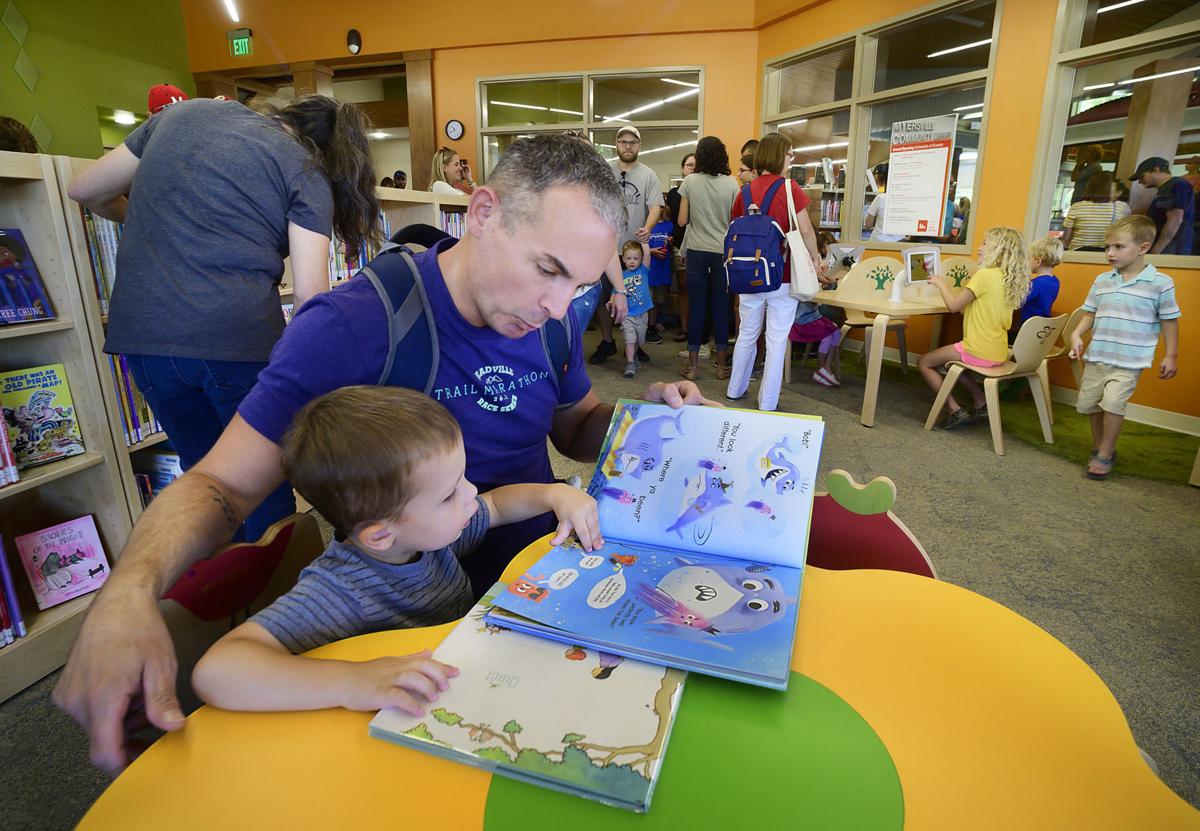 3-year-old Wyatt DuPlissey and his father, Aaron DuPlissey, of Lovettsville, Va., check out some of the books in the childrens’ Discovery Depot last month at the grand opening of the Myersville Community Library. 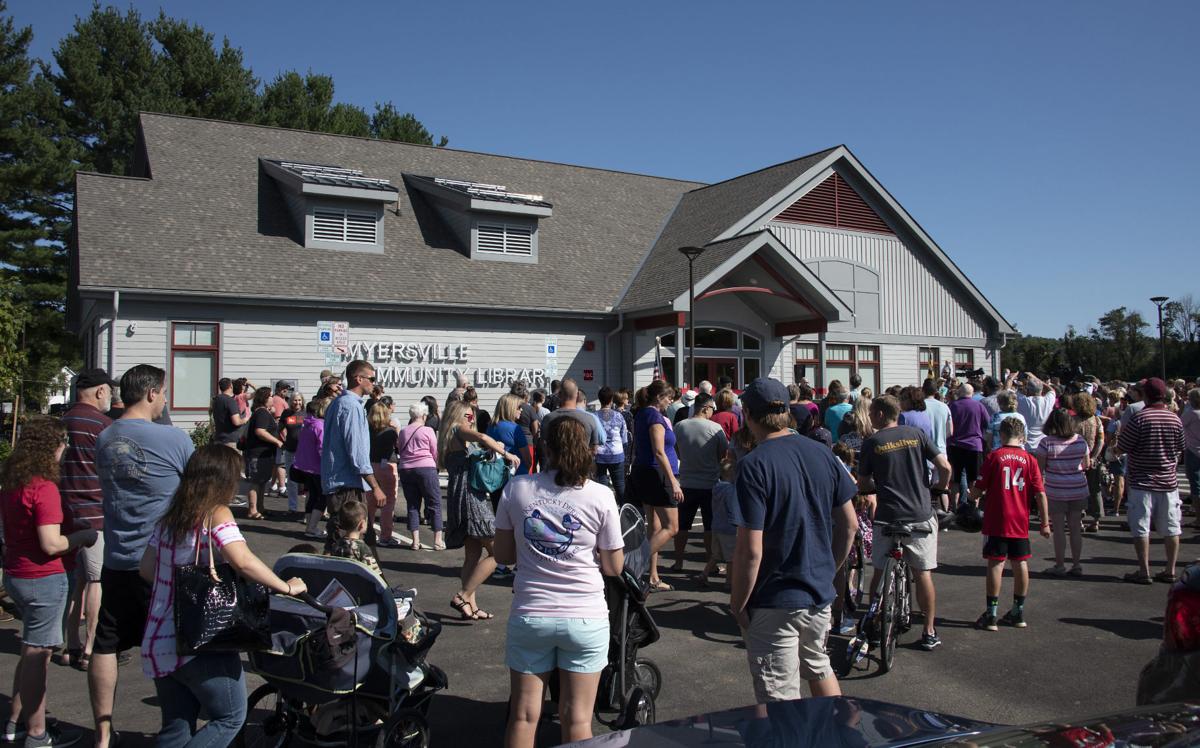 Over 200 people gathered for the grand opening of the Myersville Community Library at 8 Harp Place in Myersville on Saturday morning. 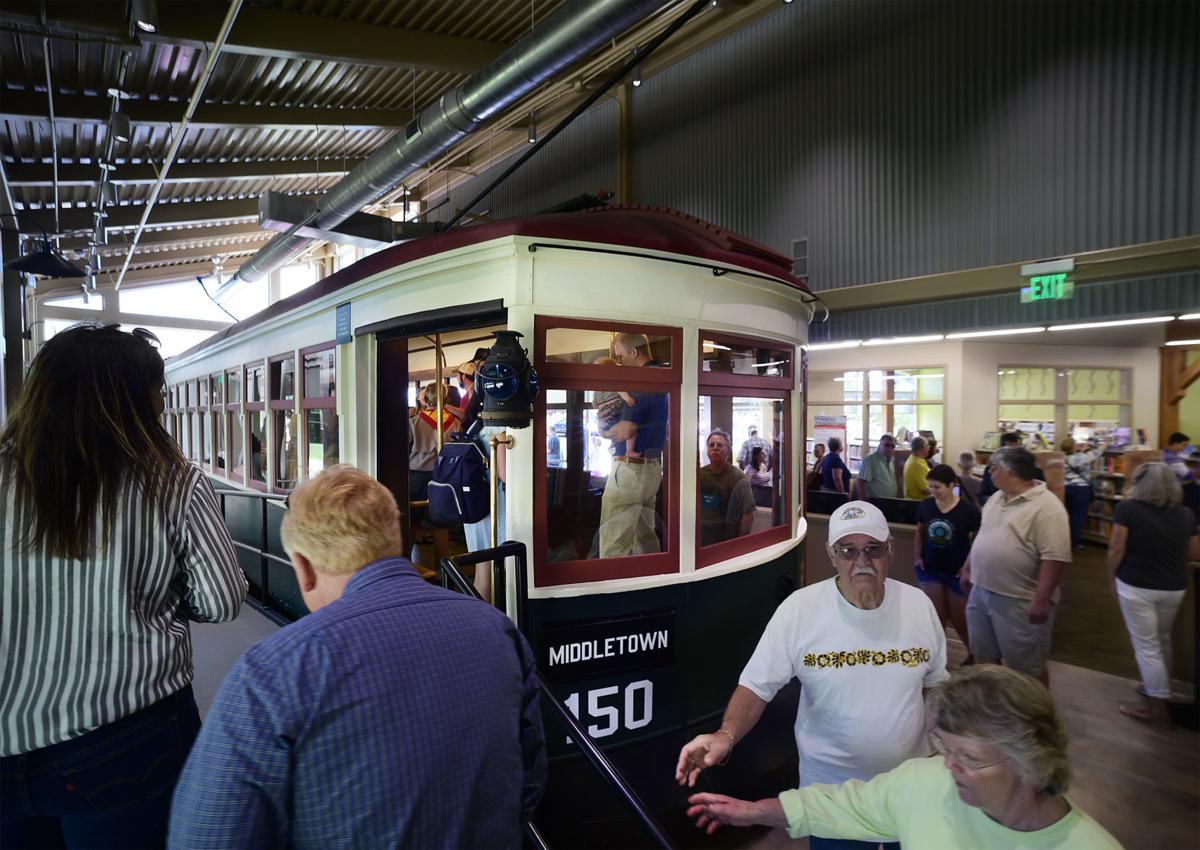 The centerpiece of the new Myersville Community Library is Trolley 150, which was built in 1918 and ran through Myersville as part of the Hagerstown and Frederick Railway. 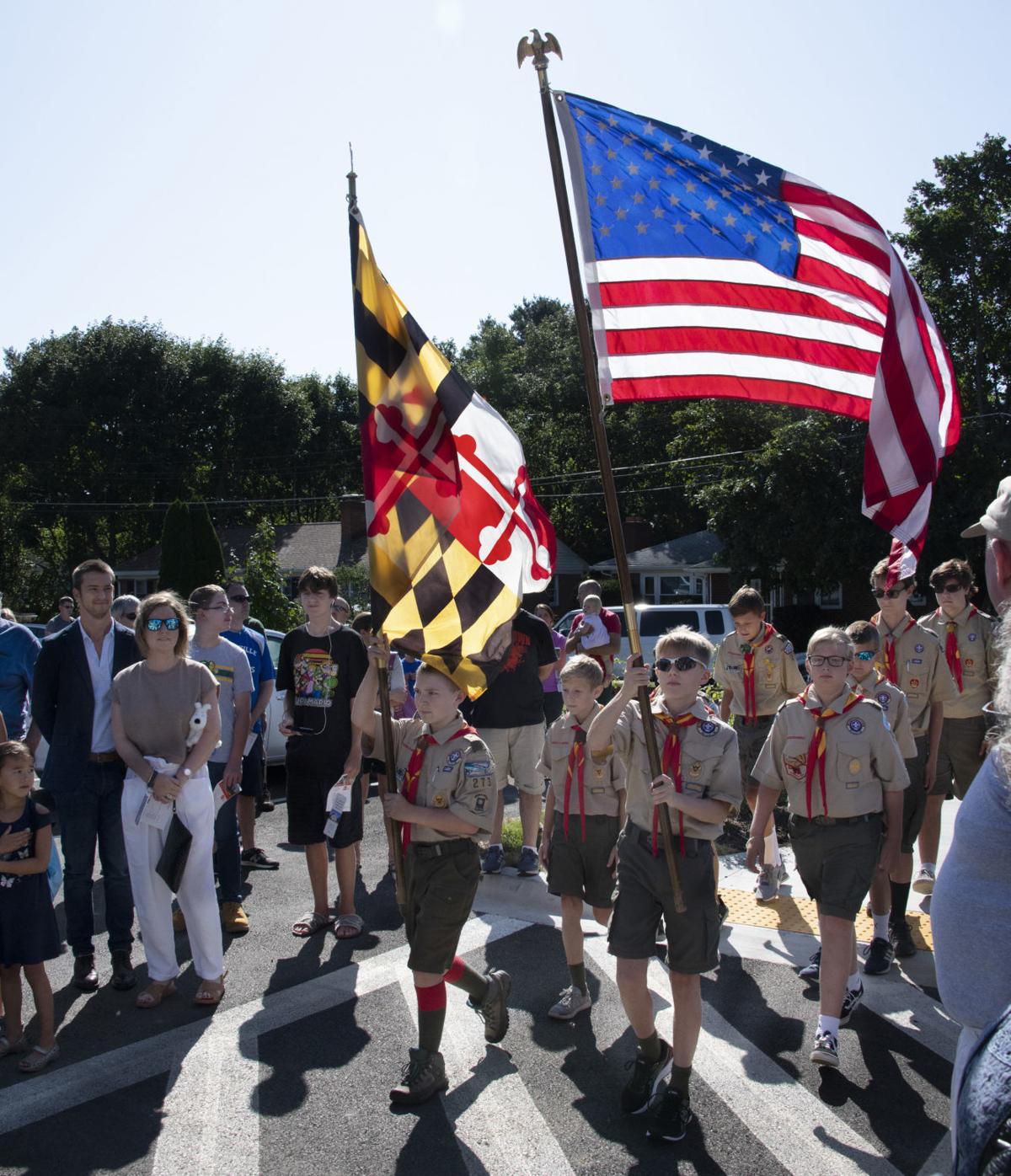 Members of Boy Scout Troop 273 of Myersville post the colors during the grand opening of the Myersville Community Library on Saturday morning.

More than 200 people gathered Saturday for the grand opening of the Myersville Community Library at 8 Harp Place in Myersville on Saturday. 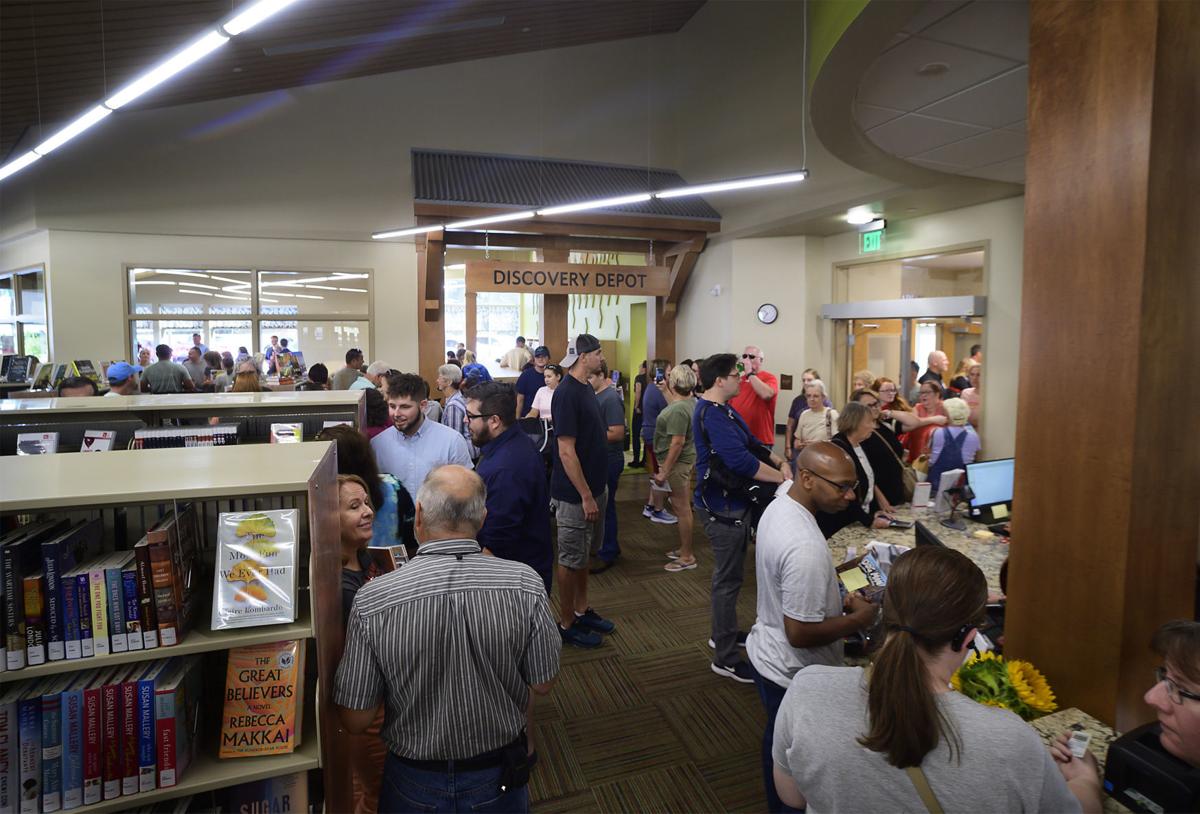 Over 200 people tour the new Myersville Community Library after a grand opening ceremony on Saturday.

3-year-old Wyatt DuPlissey and his father, Aaron DuPlissey, of Lovettsville, Va., check out some of the books in the childrens’ Discovery Depot last month at the grand opening of the Myersville Community Library.

Over 200 people gathered for the grand opening of the Myersville Community Library at 8 Harp Place in Myersville on Saturday morning.

The centerpiece of the new Myersville Community Library is Trolley 150, which was built in 1918 and ran through Myersville as part of the Hagerstown and Frederick Railway.

Members of Boy Scout Troop 273 of Myersville post the colors during the grand opening of the Myersville Community Library on Saturday morning.

More than 200 people gathered Saturday for the grand opening of the Myersville Community Library at 8 Harp Place in Myersville on Saturday.

Over 200 people tour the new Myersville Community Library after a grand opening ceremony on Saturday.

After officials worked on the project for 18 years, the Myersville branch of the Frederick County Public Library system has finally opened.

More than 200 people gathered in the parking lot of the library, at 8 Harp Place, at Saturday morning’s grand opening to hear opening remarks from local dignitaries and to get their first glimpse at the shiny, new library.

While speeches were given, children were already taking advantage of the library’s grounds by playing among the new plants and fresh-cut grass and at a nearby playground.

“Our focus is not just on the focus of transaction of information,” he said. “It’s on the connections we make with our customers.”

Connections were already being made at the grand opening with a day packed with live music and activities for all ages.

“This branch is here because of the community of Myersville,” said Marian Currens, Myersville branch manager. “It has everything you can come to expect from all of your Frederick County Public Libraries in terms of meeting space and the materials we have to offer. We’re really just hoping to connect and meet our new community.”

Once the giant red ribbon was cut, people poured in the front door to tour the new space. Others took advantage of all the literature and browsed the bookshelves to check out books.

Myersville resident, Kristen Johnson, had three books in her arm and was scanning the shelves for a fourth. She frequents the library system but always had to travel to Middletown or Thurmont to check out books.

Going forward, the Myersville branch will be much more convenient for her.

“It’ll be so much easier,” she said. “A lot of people in town can just walk here. It’ll be so nice to bring my kids somewhere closer in the community.”

Sheila McDuff, associate director of FCPL, said the new branch incorporates everything one may find at other library locations and is approximately 7,000 square feet — 2,000 of which are taken up by a trolley that was part of the community for many years.

There are two study rooms, a laptop bar, a community gathering room with a smart technology board, and an extensive children’s department.

The trolley, the first thing your eyes hook on when entering, will serve as a museum piece. McDuff said there will be tours for school groups and historical programming related to it.

Myersville becomes the ninth branch of FCPL with two others planned — a demolition and reconstruction of the Middletown branch, slated to begin in fiscal year 2023, and a brand-new branch in the Lake Linganore community. The library system also operates two bookmobiles.

While online book sales are climbing and brick-and-motor stores like Borders have shut down, FCPL seems to be on an uptick.

McDuff attributes this to libraries becoming more than a stop to check-out books.

The challenge however, according to McDuff, is marketing to those who aren’t familiar with the library system and getting out into the community.

“Our challenge is trying to educate the public and making sure everybody knows about what’s available to them for free at their public library because it’s a lot more than it used to be,” McDuff said.

The Myersville community has wanted a library for almost two decades, and FCPL recognized the need.

The bookmobile stop in Myserville has continued to be one of the most popular, McDuff said, and many residents of Myersville often traveled to the Middletown branch or the C. Burr Artz library in downtown Frederick due to its extensive collection.

The discussion of adding a branch in Myersville began in 2001, McDuff said, but was then delayed due to financial constraints. The town, however, held steady and worked to get their own space.

“The town has demonstrated their desire for a library. The site that we’re on is the former town hall site, it’s also a former elementary school site and the town paid for the demolition and donated the land to the county to build the library on,” McDuff said.

And now they have it.

“I’m really looking forward to getting to know...and figuring out how to best serve the community,” Currens said.

More than a library

- Car #150 was one of four cars put into service by the Hagerstown and Frederick Railway in 1923. It is the only surviving car of those four.

-The Town of Mysersville purchased the coach from private owner C. Donald (Don) Easterday in 2017 and renovated it to be incorporated into the new Myersville Community Library

- It's top speed is approximately 25 mph

Such a wonderful, intimate branch. Great staff as well. Myersville has waited a long time for this, and they will love it.

Thanks to Jan Gardner and the county council for making this library a reality.

And the taxpayers! We’ve waited over 29 years for this. Couldn’t even get in yesterday because the dead end road was closed by The sheriffs dept. it’s a shame that the “traditional” library, a place to read, study, is now a “community gathering place”. Soccer moms bring their babies and let them go crazy while they all gather in a corner and text or gossip. There should be a dedicated, closed off children’s section so as to still maintain the purpose of a true library. The main library in Frederick has them. Still, now can go to my own library and not have to fight for a spot in Middletown.

There is a children's room in the Myersville library.