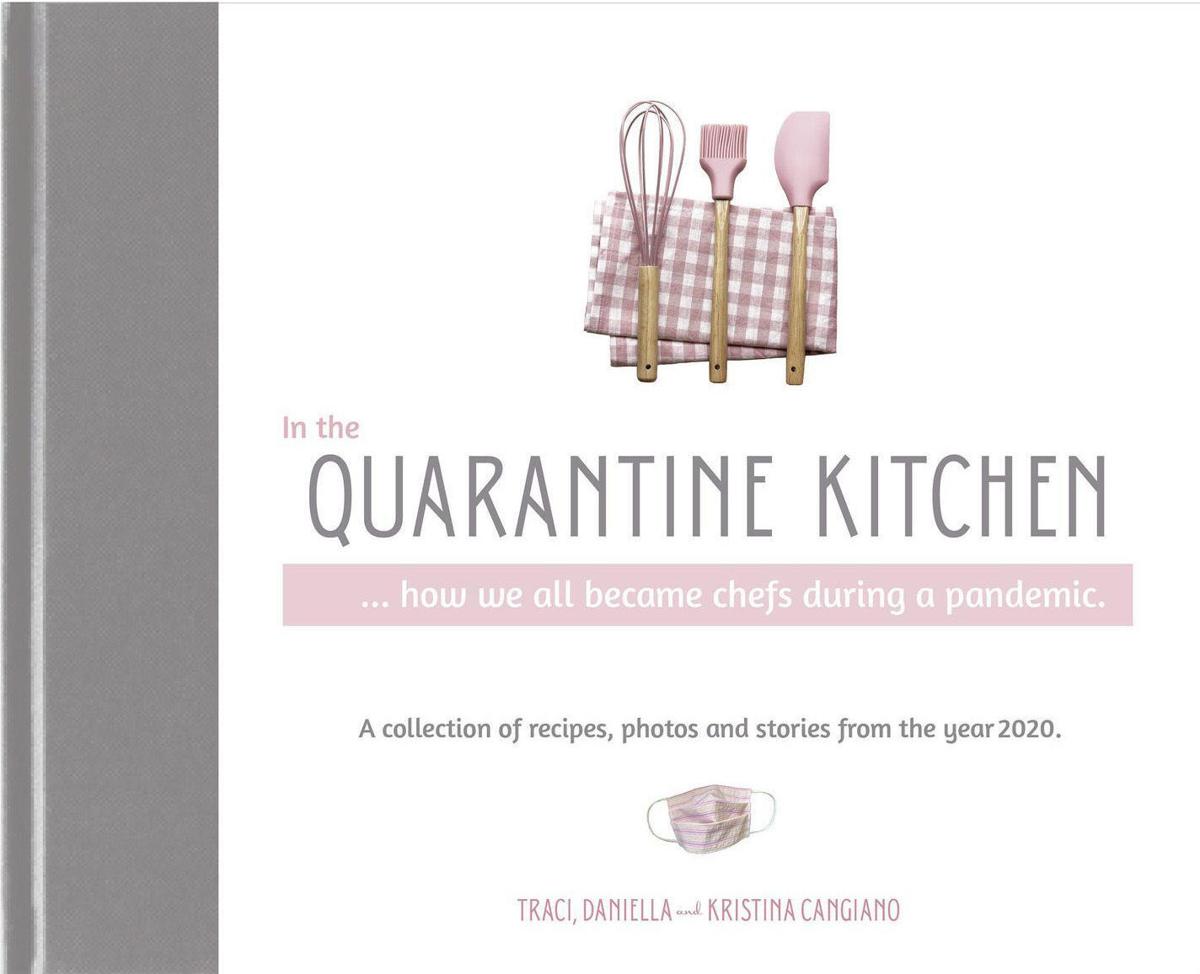 This cover image released by Traci Cangiano shows “In the Quarantine Kitchen,” a self published book of recipes collected during the pandemic by Traci, Daniella and Kristina Cangiano. 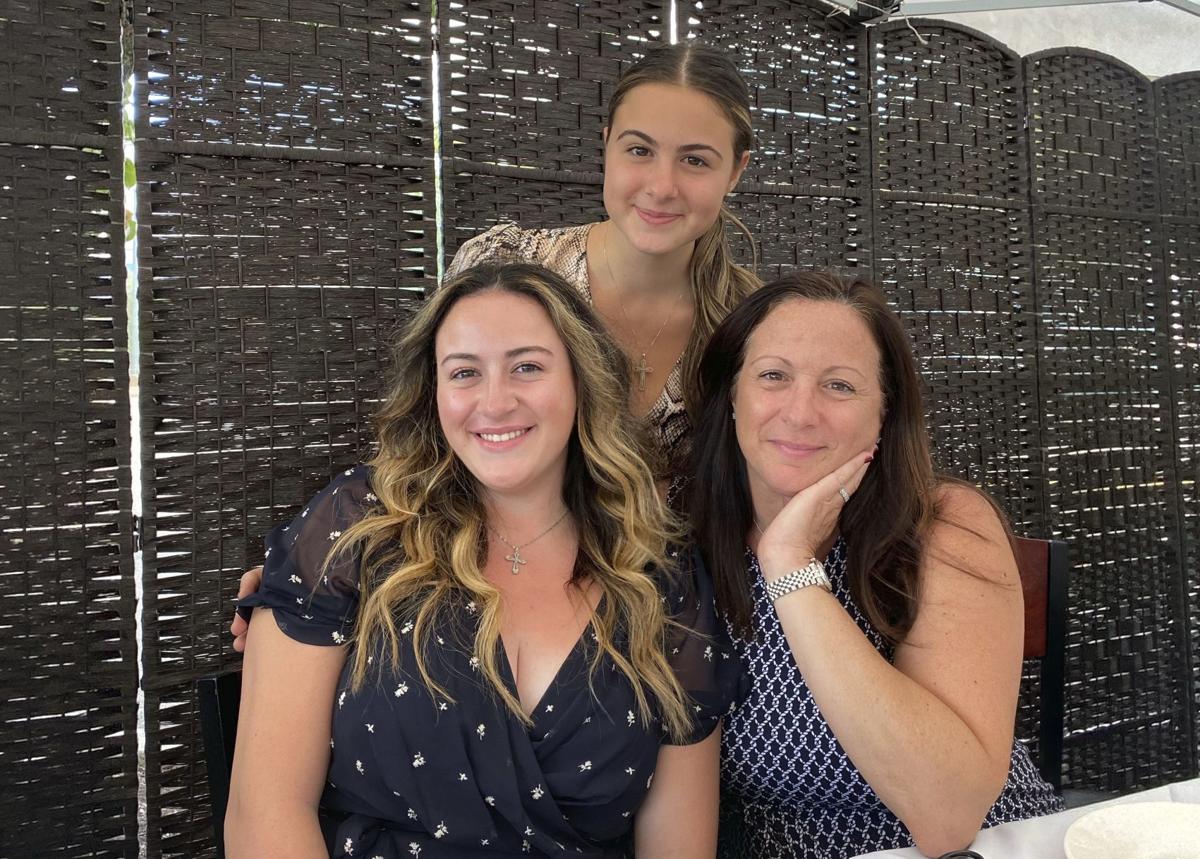 Traci Cangiano, seated right, with her daughters Daniella, left, and Kristina in the Staten Island borough of New York. The Cangianos, who organized a Facebook group that swapped homemade recipes during the pandemic.

This cover image released by Traci Cangiano shows “In the Quarantine Kitchen,” a self published book of recipes collected during the pandemic by Traci, Daniella and Kristina Cangiano.

Traci Cangiano, seated right, with her daughters Daniella, left, and Kristina in the Staten Island borough of New York. The Cangianos, who organized a Facebook group that swapped homemade recipes during the pandemic.

The pandemic gave them lemons. So they made lemon rosemary chicken.

A Facebook group that swapped homemade recipes after restaurants were shuttered during lockdown has blossomed into a vibrant online community and has now produced a cookbook.

“In the Quarantine Kitchen” offers some 120 recipes from pastas to fish dishes that pandemic users have proudly posted — with all proceeds going to charity.

Some dishes are cherished family hand-me-downs, like Nanny’s Stuffed Calamari in Red Sauce and Aunt Nellie’s Fried Chicken. Others were concocted during the pandemic, like one for tres leches ice pops that was created because ice cream shops were closed. It uses cans of condensed and evaporated milk, coconut milk, vanilla and a sprinkle of cinnamon.

The project started in the Staten Island home of the Cangiano family. Traci Cangiano and her daughters Daniella and Kristina launched a Facebook page in March 2020 when the COVID-19 quarantine began.

“We started it as a way to just share our dinner with our family and friends. We didn’t see in the beginning what it would become. We just thought it was something fun to do, something to distract us,” said Daniella Cangiano.

Now, more than a year later, the page has more than 44,000 members who post recipes for others to try and comment on. The top posters by country are the United States, Canada, Philippines, Italy, United Kingdom, Portugal, Vietnam, India, Cambodia and South Africa.

Letters of thanks came pouring in from families looking for dinner inspiration and community. One woman wrote that her daughter had cancer and they checked every day to see what people were cooking. “I would never think in a million years a Facebook page would affect people’s lives like that,” said Traci Cangiano, a real estate broker.

The Cangianos decided to go further, collecting all the recipes and self-publishing their cookbook on Etsy. It is dedicated to front-line workers. They use a printing press in Kansas, buy the copies and then resell them online for $35.

The book is in its second printing. All proceeds go to The Stephen Siller Tunnel to Towers Foundation, honoring firefighter Stephen Siller, who lost his life saving others on 9/11, and all first responders.

The 250-page cookbook is filled with stories and family photos, memories of relatives coming together over meals and ways to honor lost members with dishes.

“This book is a culmination of the people on this page. It’s their book. And we wanted them to have the opportunity to put their story, their tributes, their dedication, their recipes,” said Traci Cangiano. “To us, this book is like an archival piece for the year 2020. I hope we never see anything like 2020 again but this book will serve as a nice reminder.”

Online, too, the community remains active. New postings go up every few hours. “We could probably do five more books, I kid you not,” said Traci Cangiano.

Some readers take a recipe from the book and then ask the creator if they can add, say, more salt here or maybe a smidge of jalapeno there, making it a living, constantly edited dish.

“The interaction between the page and the book then became like this collaboration between virtual and the hard copy. It’s just amazing,” said Traci Cangiano. “It’s become such a welcoming place and it’s a safe ground.”

All are welcome to join the online community, but there’s one rule: No politics. The Cangianos check every post to make sure it is family-friendly and nonpartisan.

“Obviously the climate of the world that we live in, things get crazy. People say things that just get out of hand. And I didn’t want to have any of that confrontation on that page,” said Traci Cangiano.

The pandemic disrupted life for the Cangianos, as it did for everyone. Kristina is a senior in high school and the Quarantine Kitchen takes her mind off the stress. “There’s a lot going on, but it’s definitely helped,” she says.

Her older sister, Daniella, graduated St. John’s University remotely and is an avid baker. She shares her creations with the Facebook group and likes hearing feedback.

“That kind of kept me going. I knew I had something to look forward to, even though things were kind of crazy,” she says. “I was able to still bake and still enjoy that. As one of my favorite hobbies, I was able to share it with other people, which was so much fun.”

Welcome the Amish Outlaws! This high-energy band brings a party wherever it goes. After 16 y…