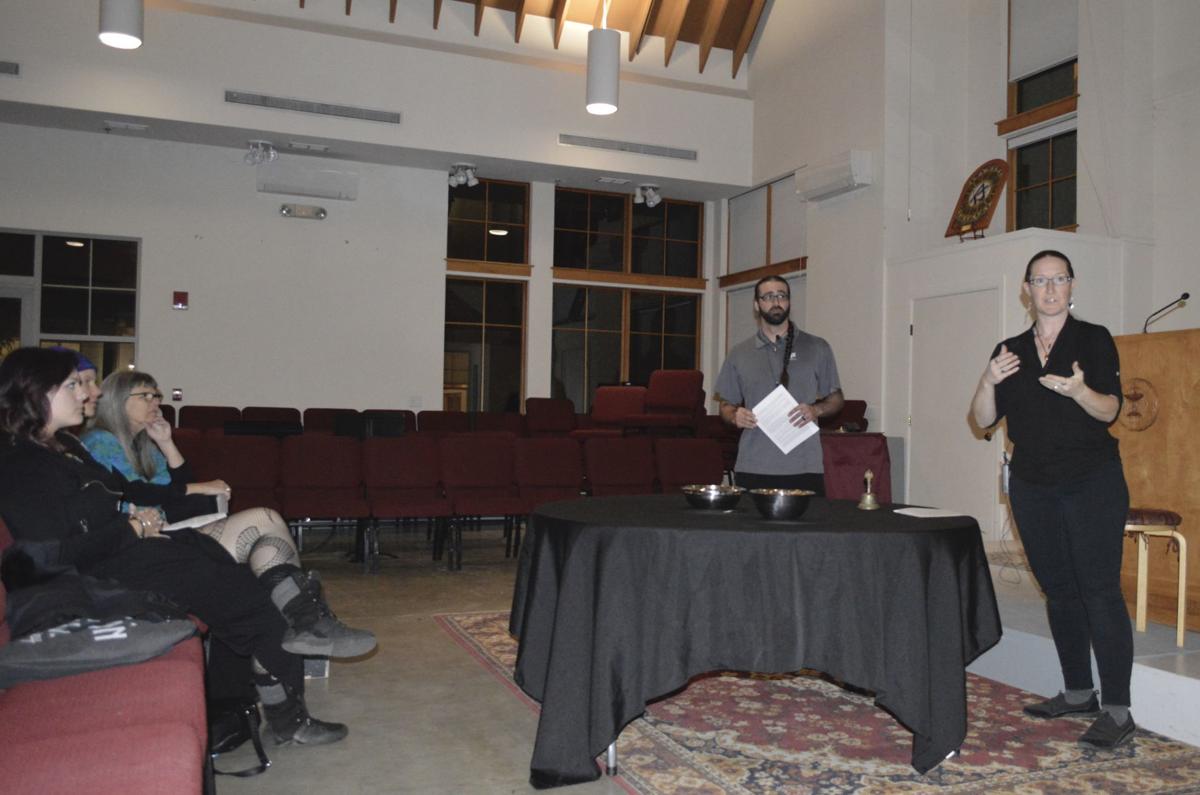 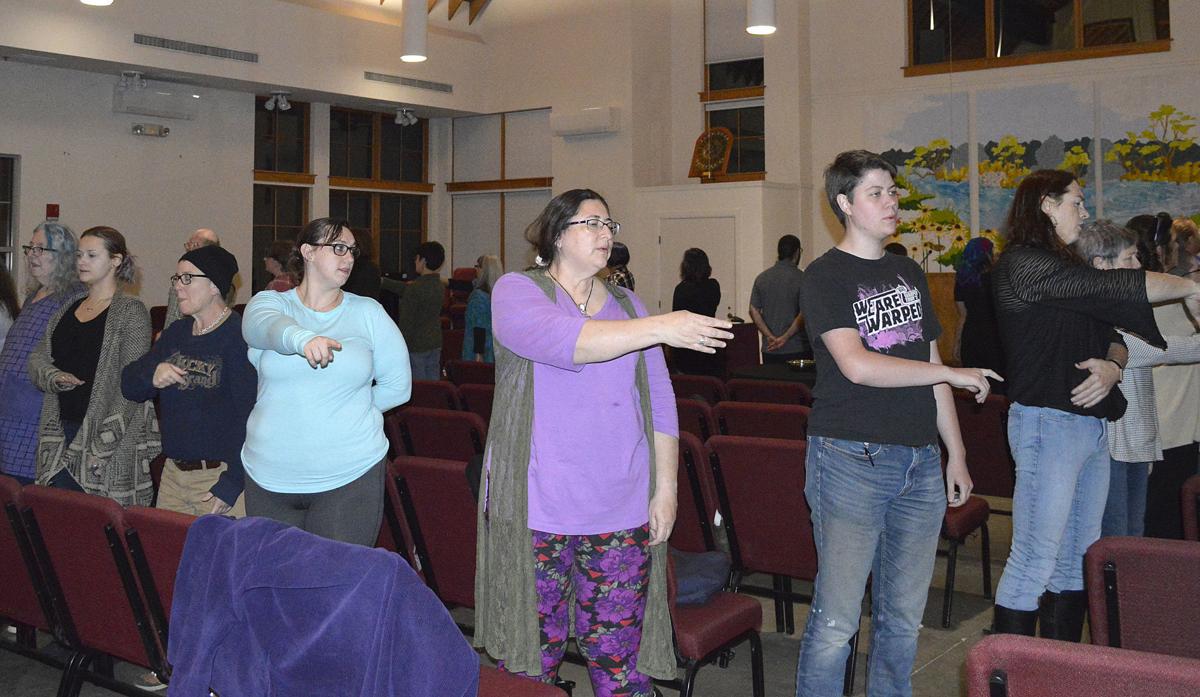 Those looking for pointed hats and bubbling cauldrons at the Blackfeather Mystery School in Frederick have been watching too many movies.

Instead, on a recent Thursday night, the class — consisting of between 35 and 40 people — gathered in regular clothes at the Unitarian Universalist Congregation to learn about being a pagan and a shaman. The students ranged in age from 20s to older, and ranged in style of dress. Some came in dyed natural materials, others in jeans and T-shirts, and others dressed like they just came from the office.

Irene Glasse, a mystic witch, has been leading the classes since January with Jake Hackney, a shaman.

Glasse said she came up through a structured tradition within modern paganism.

“And when you come up through a system that is very well-grounded and rounded in terms of the information presented, you get a really balanced education and enough information to do energy work, and magic and spiritual exploration safely,” she said.

Over the last decades, Glasse said she has observed that a lot of the obstacles exploring paganism have been removed.

However, because it’s not a self-guided activity, she said it is very easy “to become a very unbalanced system, where you’ve learned enough information to get yourself into trouble without necessarily knowing how to structure the experiences that you have or what to do when you experience something outside of the realm of your practice or your ability level.”

Glasse said she pursued the Blackfeather system “to find a space that is in between a very structured Wicca-style system and a more fluid intuitive space, which allows people the best of both worlds.”

She also trained in shamanism and found that the toolset of both worlds were complementary.

“The two systems really work well together,” she said.

That’s why in Blackfeather Mystery School the students learn both paganistic and shamantic tools to start their journey.

The students, who vary from the regular group of up to 40, with an another 20 who drop-in for classes, also range in their own experience levels. Glasse said there are people who are novices as well as people who have been practicing for decades.

Upcoming classes include magical crafting and shapeshifting in the shamanism aspect of teaching. New classes begin in January, which will be the rook level and will start to delve into things like pastoral counseling and shamanic work in terms of healing others.

Alison Behman of Gaithersburg said she decided to take classes because she was seeking self-empowerment.

“This is something I really need for myself. I’ve been pagan since the winter solstice of 2006. But there’s no clear path to learning .... So you know, I get on a path and then I kind of fall off then back on,” she said.

Because the school is lead by people she knows and respects, Behman said that the classes have been “extremely helpful to me, not just in my magical practice, if you will, but in my personal life.”

Behman said she has clinical depression as well as panic attacks and anxiety. These classes, she said, have helped her find her inner power to change herself.

She said she “can be OK” with herself.

Behman said she plans on going through the four-year course because she wants to continue her journey of self-empowerment and have the ability to do good in the world.

“Because that is my journey. I am on Earth to improve not just the Earth, which we, of course, revere as pagans, but individual people and wild animals.”

Diane Hunt of Clarksburg has been a practicing pagan for more than three years.

“One of the reasons why I started coming to this congregation was that they have Earthcentered spirituality services on a regular basis and I wanted to explore that. So it just seemed like a really good fit,” she said. “And I’ve been working with that for several years. And this is the next step in the progression.”

Hunt started taking the classes in January and said she has learned “quite a lot.”

“Out of these classes, I’ve started to figure out some of my coping mechanisms that I need to improve,” she said.

Hunt said she wants to continue with the classes to the end, as well as to the next level.

Shelley Luehring of Frederick has been a solitary practitioner, so the group allowed her “to learn different types of rituals and different avenues in the pagan community.”

“Irene and Jacob take it from a very basic approach, so that no matter the path we can incorporate the practice, and it can be used in so many different pagan paths,” she said.

Luehring said what she has enjoyed the most about the classes is that they talk about the methods on how to connect with our ancestors. For instance, how to do it, expectations, making offering and “just understanding the different approaches that one can take, and the different experiences that each can have by doing the same exact thing.”

Attending the Blackfeather school, Luehring has been introduced to people who share her beliefs.

“The community connection is also very important and so by attending the Blackfeathers I do meet other pagans and form connections with other people that have the same type of religious belief and background that I have,” she said. “That may sound trivial but as a solitary practitioner it has been difficult to find like-minded people to discuss and learn different pagan beliefs and traditions.”

What: The Blackfeather Mystery School

Where: Unitarian Universalist Congregation of Frederick

Cost: Recommended donation of $10 a session.

Paganism, on a larger scale, is any religion that is not Christian. But those who identify as pagan have a respect for all existence of life, nature and the Earth.

According to Shamanism.com, the practice of shamanism teaches its practicers to focus on the connection "to nature and promote the well-being of all creation." It is an ancient healing practice most often associated with Native Americans.

"Rudolph the Red-Nosed Reindeer: The Musical"

The holiday classic soars off the screen in this musical adaptation. Continues through Dec. …