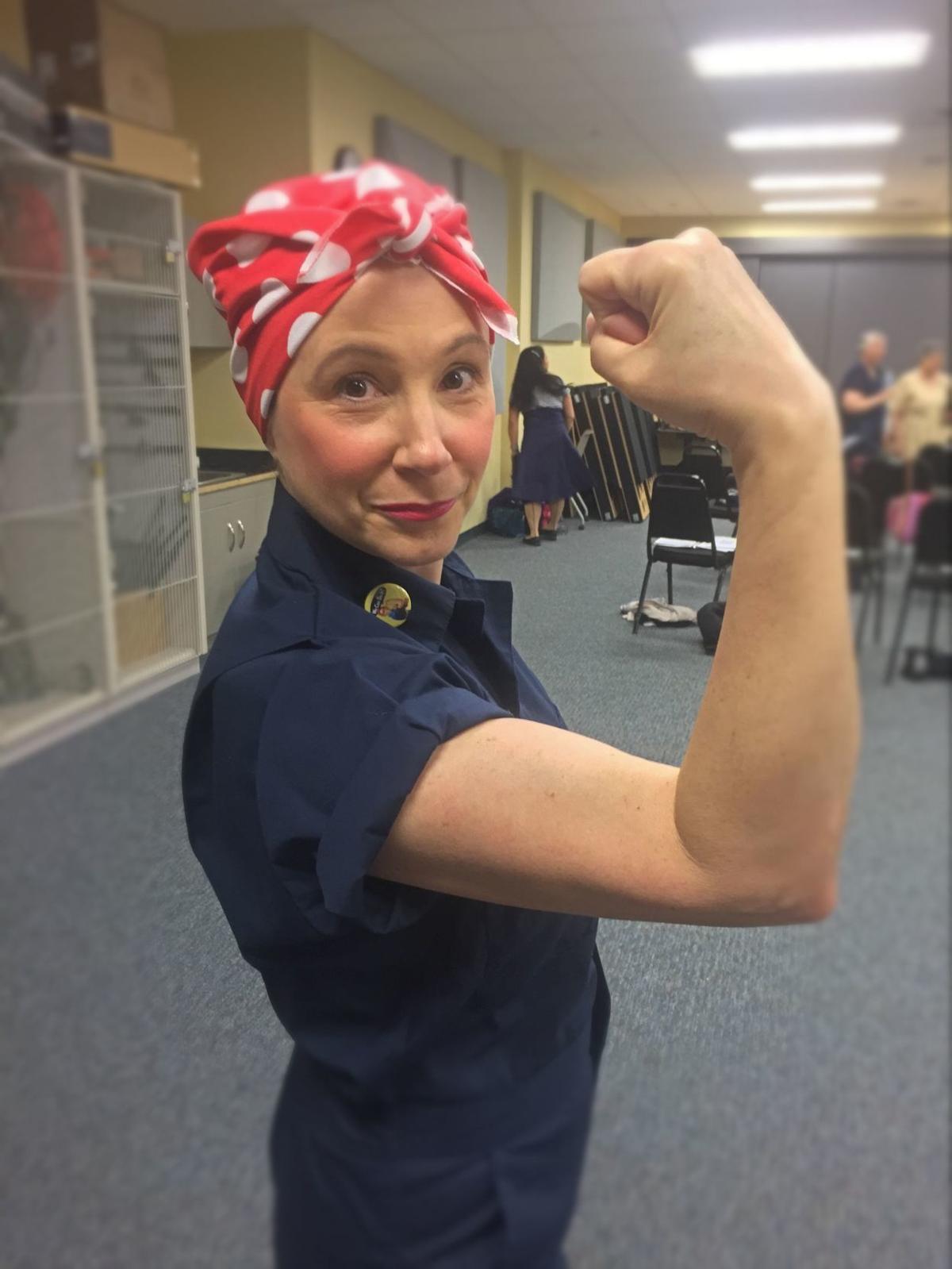 Choral Arts Society of Frederick soprano Nina Hovis strikes a pose as iconic “Rosie the Riveter” ahead of this weekend’s 1940s-themed concerts. 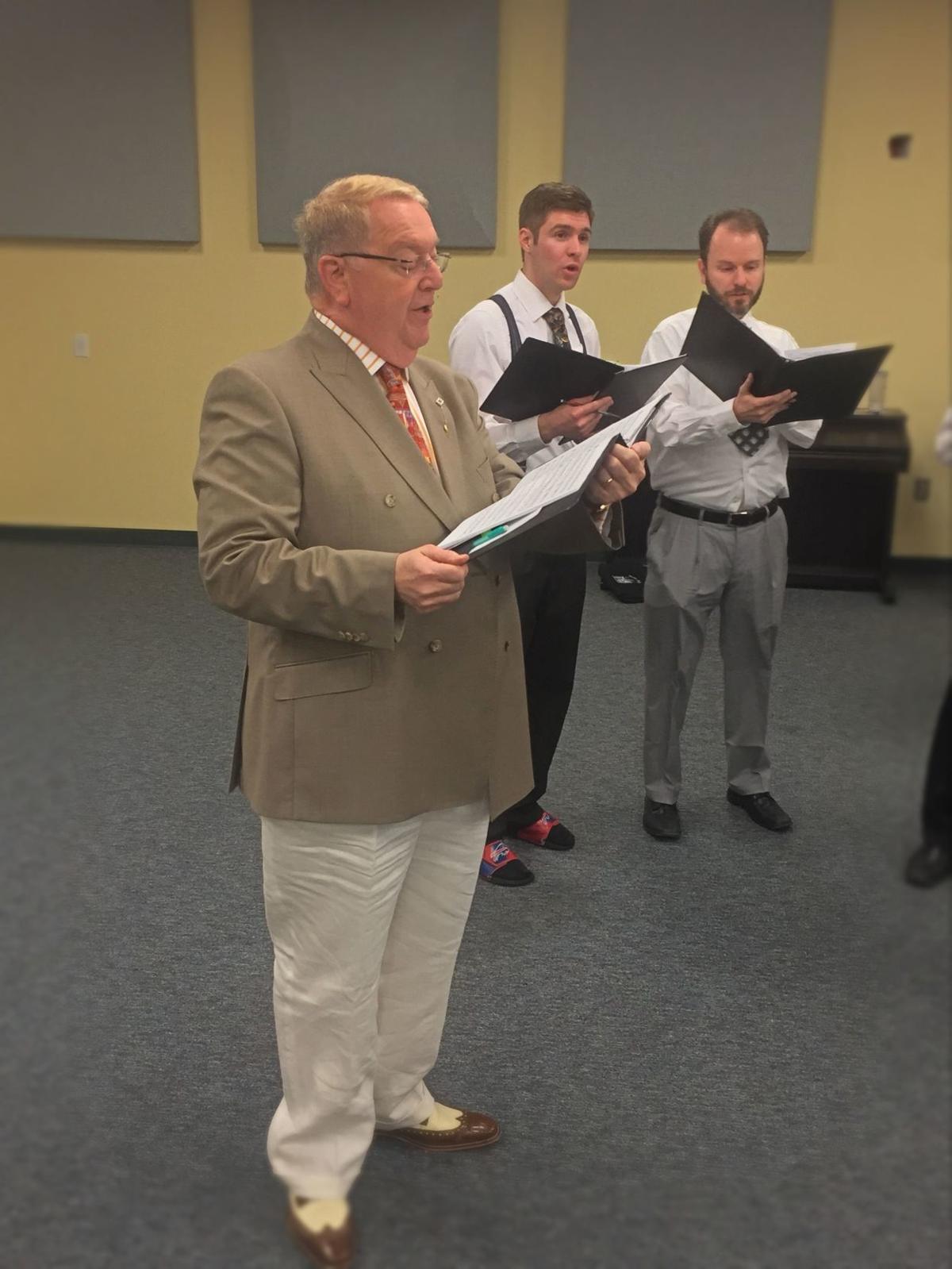 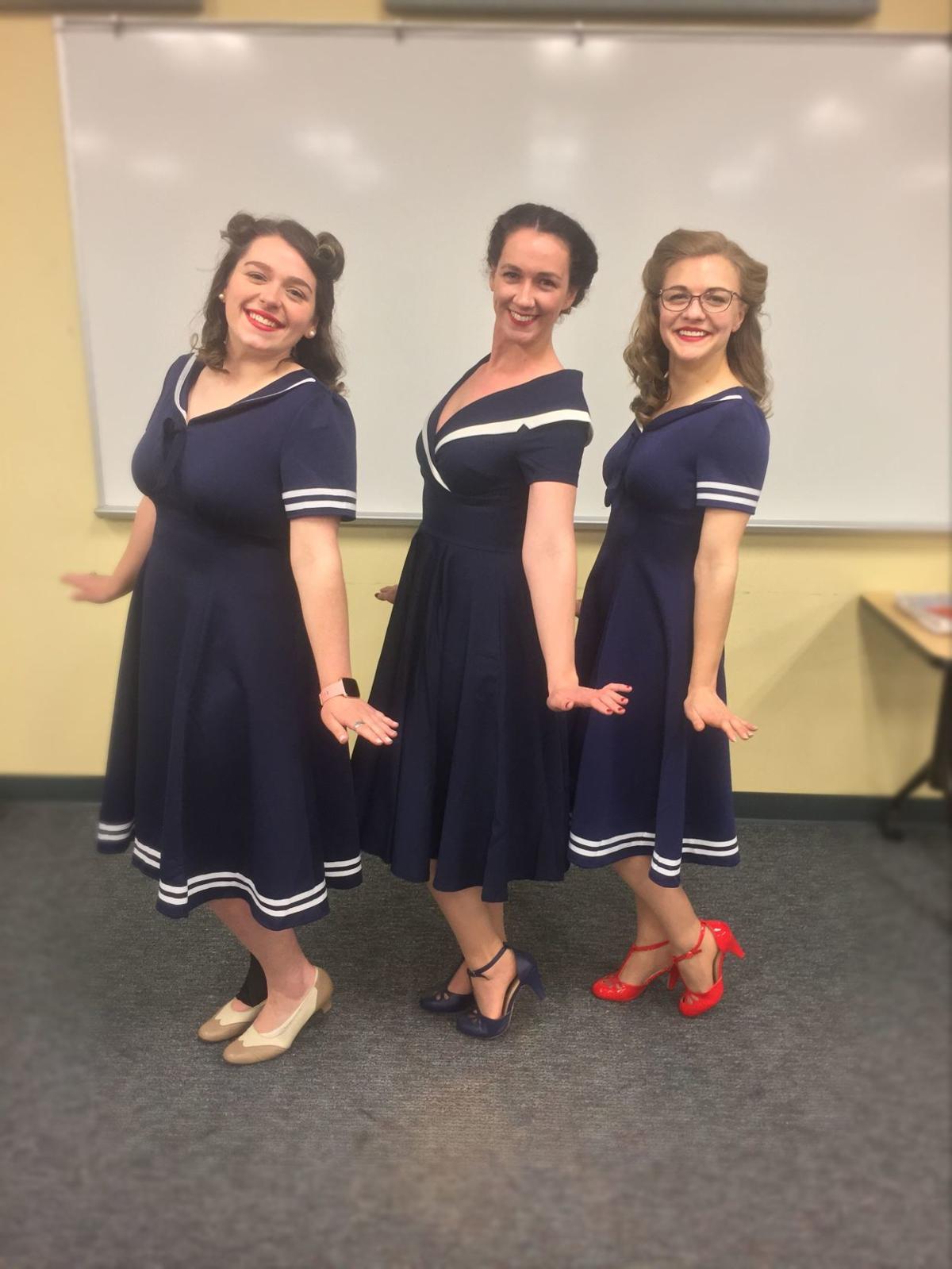 From left, Lacey Ann Riggs, Meghan Tomlin, and Maggie Wolen are statements in sartorial splendor, as they channel 1940s singing legends, the Andrews Sisters ahead of the Choral Arts Society of Frederick's 1940s-themed concert this weekend.

Choral Arts Society of Frederick soprano Nina Hovis strikes a pose as iconic “Rosie the Riveter” ahead of this weekend’s 1940s-themed concerts.

From left, Lacey Ann Riggs, Meghan Tomlin, and Maggie Wolen are statements in sartorial splendor, as they channel 1940s singing legends, the Andrews Sisters ahead of the Choral Arts Society of Frederick's 1940s-themed concert this weekend.

The Choral Arts Society of Frederick (CASF) this weekend concludes its 75th anniversary season with a pair of concerts featuring hit songs from the 1940’s, and accompanied by special guests Howard Burns and the Frederick Community College Big Band, along with the high-octane dance team, the Frederick Lindy Hop Partnership.

The “Back to the Beginning” concerts will be held at 7:30 p.m. Friday, and 3 p.m. Saturday, at the Jack B. Kussmaul Theater at Frederick Community College.

During the performances, the choir, 19-piece band, and Lindy Hoppers will turn back the clock to World War II-era America, celebrating the beginnings of CASF through song and dance. Selections include hits from the popular Broadway musicals “Oklahoma!” and “South Pacific,” and the chart-toppers “I’ll Be Seeing You” and “Goodbye My Dear, I’ll Be Back in a Year.” The festivities will conclude with patriotic salutes to the five branches of the U.S. Armed Forces.

To recreate the look and feel of bygone Frederick, choir members will be dressed in 1940s attire, said CASF Creative Director Lynn Staininger.

“Our group went to great lengths — and great fun — to obtain their outfits,” she said. “Some found success at area thrift stores and consignment shops. Others got their period clothing through online retailers, estate auctions, even shops thousands of miles away. Our audience will see no less than three Rosie the Riveters, along with the suits, suspenders, dresses, shoes, lipstick, and hairstyles of the 1940s. It’s going to be great fun for everyone.”

Last week, before dress rehearsal got underway at FCC, dozens of CASF singers paraded their WWII-era costumes in an impromptu fashion show accented by much laughter and high-fiving. Nina Hovis drew cheers with her “Rosie the Riveter” outfit, complete with the feminist icon’s signature work overalls, polka-dot hair wrap and flexed biceps.

Laurel Swencki, an alto, arrived at dress rehearsal in a pink floral dress and auburn wig, as if headed to an ice cream social in Frederick 75 years ago.

Recalling her four-week quest for the ideal 1940s outfit, she laughed, “I returned my original dress and two wigs before I found this.”

Soprano Presley Vasquez, whose ruffle-sleeved, black-and-white polka dot frock recalls Lucille Ball of “I Love Lucy” fame, said she scoured the Internet high and low until she saw her dream dress displayed on a mannequin at J.C. Penney in Frederick. Meanwhile, bass Steven King found slacks to complete his vintage look through a clothier in London, just days before the concerts. Given the tight turnaround, he had the shop overnight them to Frederick.

CASF veteran H. Bruce Funk, a certified public accountant by day, rented his stylish threads at Baltimore theatrical landmark A. T. Jones & Sons Costume Shop, after realizing Frederick’s erstwhile costumer of choice, Stage & Screen, had closed. There, an 87-year-old staffer fit him for a fine double-breasted suit that would have pleased Humphrey Bogart.

Valerie Wittkamper faced similar challenges in sourcing her 1940s outfit, then pieced together an ensemble from her own closet, including a brunette “fall” hairpiece. Some might wonder if cosmic forces guided her search, given that the label on her dress reads: “Studio 1940.”

Chuckling at her good fortune, Wittkamper quipped, “I guess the moral of my story is that it pays to hang on to things.”

The surge in CASF’s membership mirrors a national trend among all ages. Chorus America, a Washington D.C.-based nonprofit choral advocacy group, estimates more than 42 million men, women, and children sing in some 270,000 choruses across the nation.

Staininger noted that CASF is the oldest and perhaps most diverse chorus in Frederick County, boasting some 55 members ages 18 to nearly 80. Many are drawn from the student body at FCC, with dozens more from the community at large. According to Chorus America, CASF’s student members will likely continue choral singing for the rest of their lives, finding fun and friendship amid the everyday stresses of life.

Notably, veterans and active military members are invited to attend CASF’s concerts free of charge, courtesy of a generous grant from Delaplaine Foundation, Inc. Following the 75-minute performances, the choral group will host a lobby reception to thank the citizens of Frederick County for 75 years of continued support. Refreshments will be served.

Who: The Choral Arts Society of Frederick

Where: The Jack B. Kussmaul Theater at Frederick Community College

Ticket info: Admission is $20 for adults (age 18-plus), $15 for seniors/military/non-FCC students, and $12 for children under 12. Veterans, active military, and FCC students with valid ID will be admitted free. Tickets may be purchased one hour before showtime at the FCC box office or online at www.mdtix.com/casof.html. Parking is free and plentiful.

Saturdays through March 7. Pancake, egg and sausage breakfast 8 to 11 a.m., Tree to Table To…