You are the owner of this article.
Edit Article Add New Article
You have permission to edit this article.
Edit
Home
News
Opinion
Sports
Topics
Calendar & events
Classifieds & local
Features
Best of the Best 2020
1 of 6 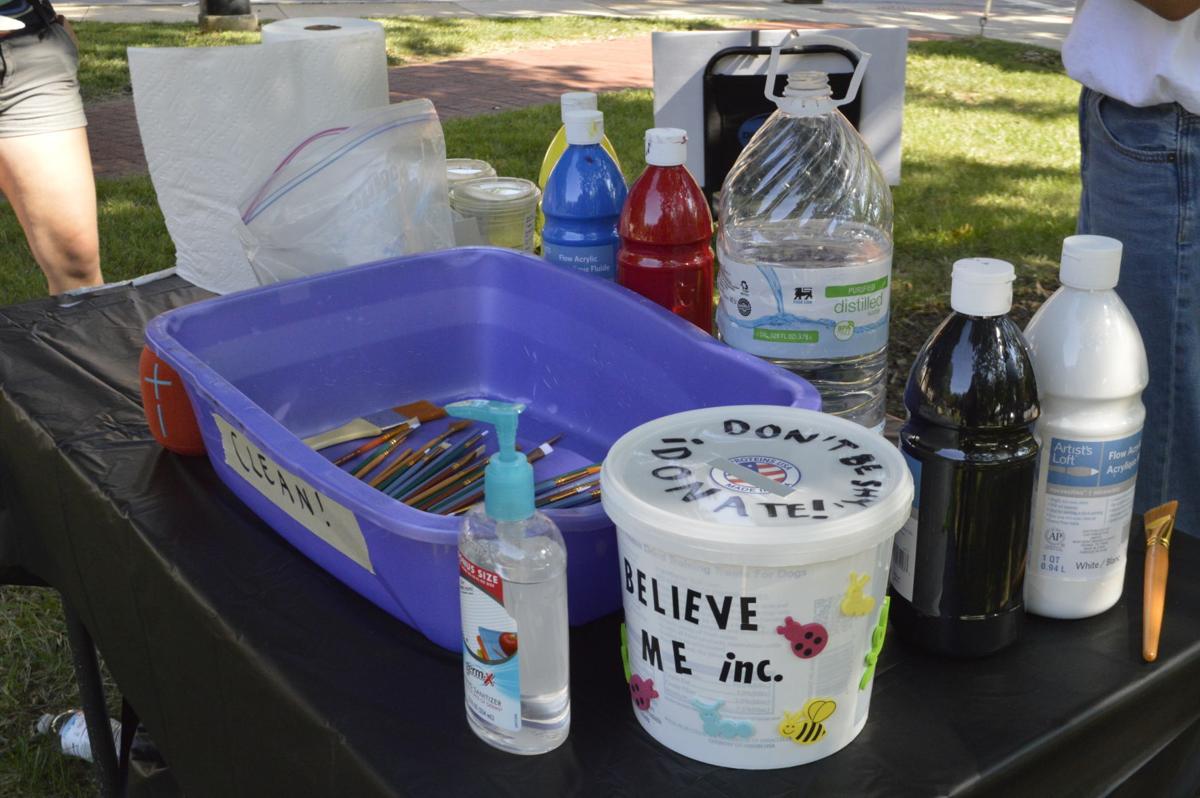 Supplies at Paint and Protest Sunday. 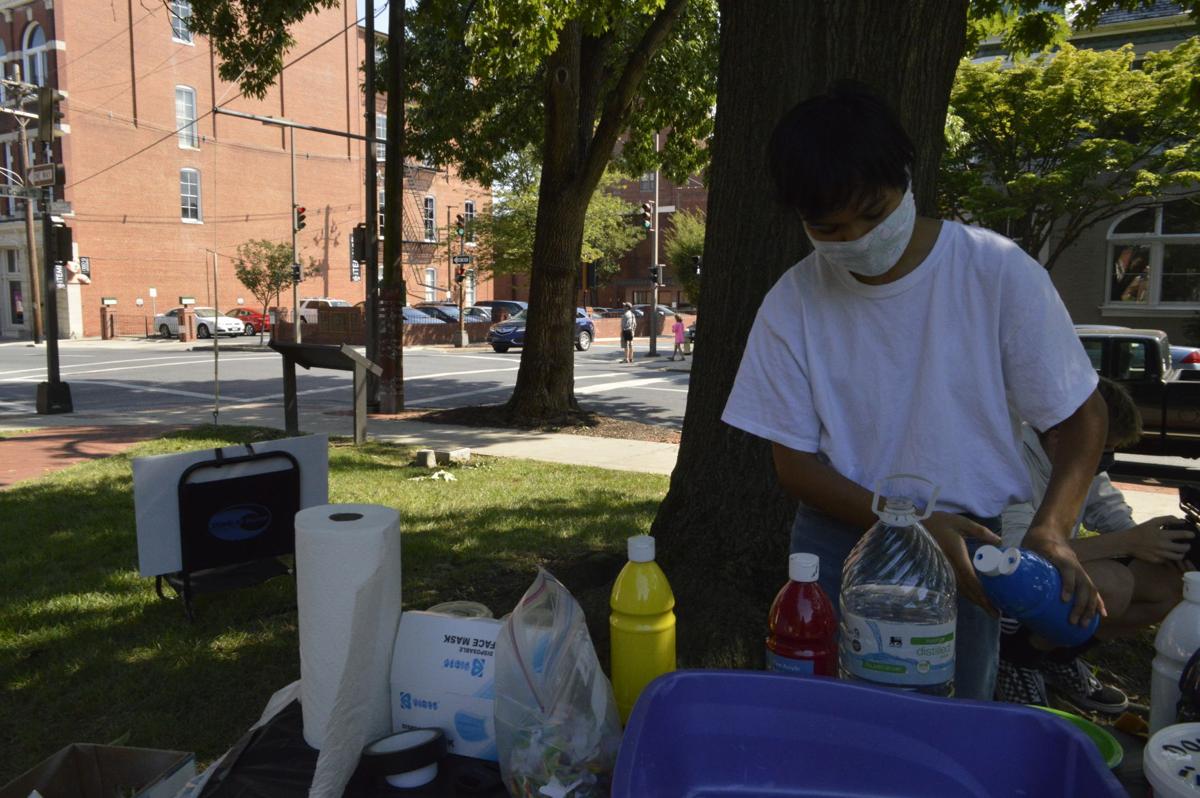 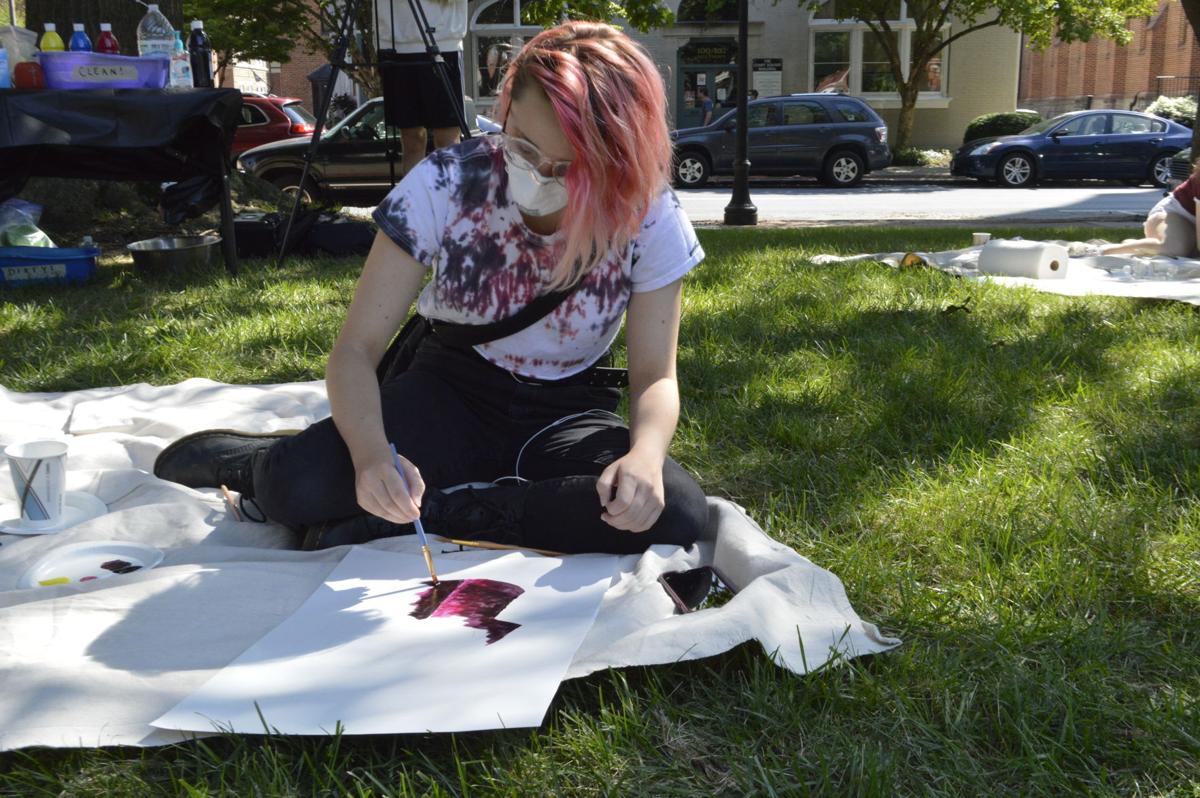 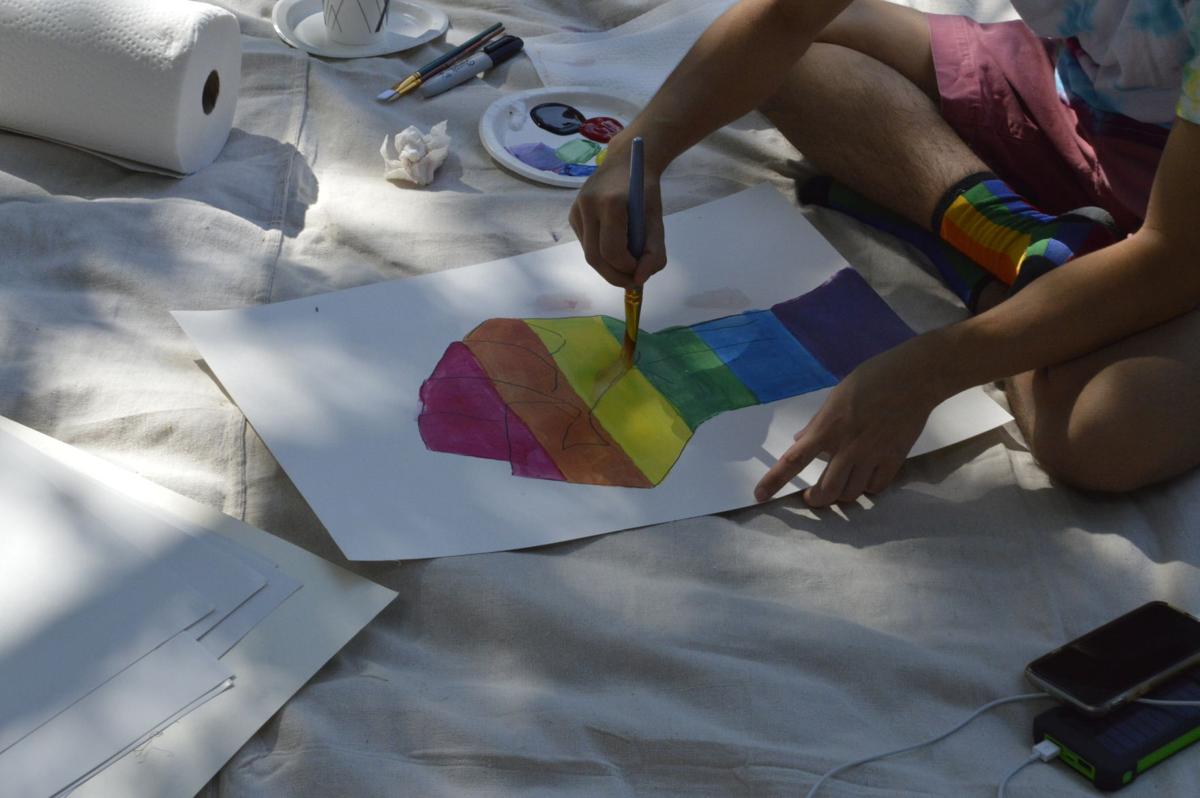 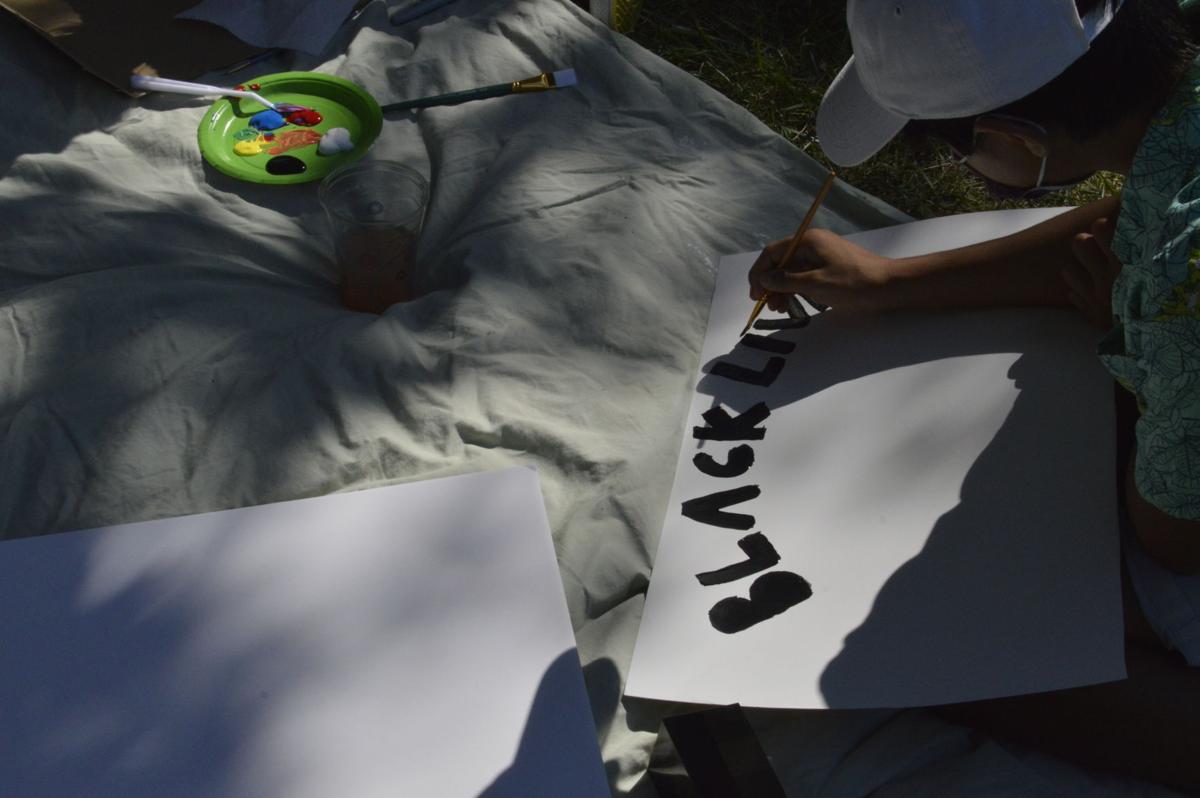 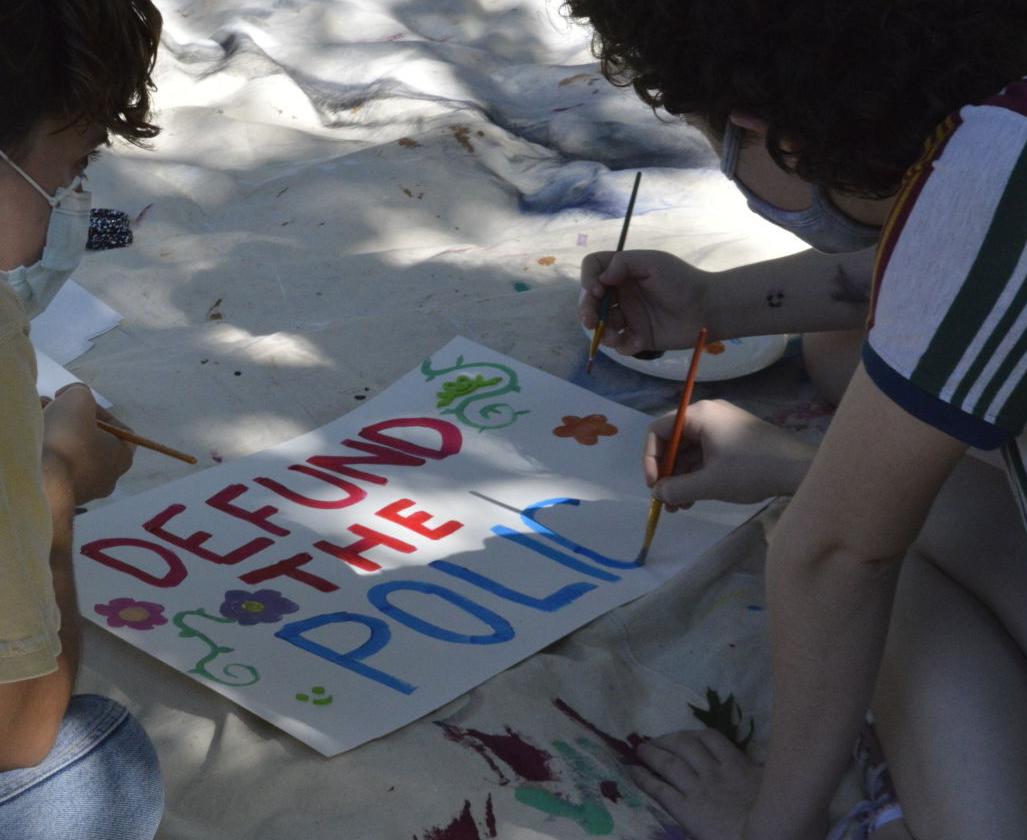 Supplies at Paint and Protest Sunday.

People gathered in front of city hall in Frederick Sunday for Frederick City Paint and Protest.

“I was pretty frustrated with everything going on and especially Jacob Blake’s shooting,” said Olivia De Guzman, founder of Community Outreach and Activism Through Art, referring to a man who was shot in the back seven times by police in Kenosha, Wisconsin. “With our club being pretty art focused, we definitely wanted to speak out about it.”

The club, which organized the event, moved from being an exclusively digital, online platform to hold the protest. Black Lives Matter art was encouraged, but the group was there to help with ideas.

“It’s completely peaceful,” De Guzman said. “There’s no march going on but … we have all materials for people to make signs that they can either bring home with them for them to hang in their house or outside … or take to protests and then … if they want to give the signs to us, we will be offering them to businesses downtown.”

De Guzman is autistic and said that protests can bother her.

“I wanted something that was a bit more accessible for those who either just like to express themselves through art, just something a little more lowkey, or like me have a physical or neurological disability where it might impair them from going and marching with others,” she said.

Donations were accepted and put toward I Believe in Me, a Frederick non-profit.

When people see the art that will be given to businesses downtown, De Guzman said she hopes people are reminded that “this is not a trend and it’s not over.”

“There are still so many black lives out there who are at the mercy of the police and it’s still an ongoing fight,” she said.

It’s also important that people remember that art plays an important role in every part of our lives, including change, she said.

Leigh Plugge of Mount Airy came to the protest to support De Guzman and the cause.

“It’s really important to me,” she said.

“Instead of just like one sided opinions about things, that they listen to other people’s stories,” she said.

Phoenix Cardwell of Middletown said she cares about the movement and believes it should be important to everyone.

“What we see on the TV is pretty horrific and I think that change has needed to come for a long time and this time things definitely feel like change is coming and I think it’s important for all of us to back that,” she said.

Cardwell also said she would give her artwork to COATA and hopes that when people see the artwork they see a peaceful way of protesting.

“There’s so many rumors about more violent protesting, so I hope that it helps push that narrative more and I hope that … our art just kind of is a reminder that this movement still is going and it’s not time to stop,” she said.

De Guzman said that she also reached out to a Baltimore art non profit called Art with a Heart and that supplies from the Sunday protest will be given to the organization.

Bosco, you hit the nail on the head.

So she was upset about Jacob Blake eh? Obey a lawful command, don’t brandish a lethal weapon, don’t fight with cops, don’t put cops in headlocks and don’t show up in front of a female victim’s house and threaten that you sexually assaulted then maybe, just maybe you won’t have trouble.

pdl, well said. What is really happening in these BLM protests along with their sympathizers is that they have a not-so-hidden agenda. That is that they do not believe in any apprehending of any blacks by the police. In other words, just let the culprits go on their way.

Case in point is the killing of Deon Kay in SE (in the District). The community is calling for firing of Police Chief Newsham. I watched the film of the situation a few times and what was said of Kay. He was a known threat to the neighborhood and been arrested numerous times before with illegal gun possession. What happened was that Kay was with his fellow buddies (with another handgun) in a vehicle. The policeman told Kay to stop and he kept running. Kay had his gun (fully loaded BTW) in his hand as the policeman caught up to him.

Now, Kay's family is spinning this situation that he was really going to get rid of his gun. What nonsense. His behavior said otherwise. Naturally, a big investigation is underway.

It always gets me that the blacks look after and excuse criminal hehavior of their own race. They naturally assume that the white policemen are out to "get them." As long as that is the mindset with behavior (notoriously with resisting arrest as their standard m.o.) and committing crime, "changes" as debated by BLM (that they think they deserve) will never happen.

Excellent points, once again, sue. But, while I agree with your assessment that blacks look after and excuse criminal behavior of their own race, I believe it's evolved into they naturally assume that ALL policemen are out to "get them" these days. I don't believe the blm-ers are against just white cops, they're against all cops and the laws that they stand for.

How many Blacks will be killed by other Blacks when the Labor Day weekend deaths are tallied up? The Burn Loot and Mayhem movement doesn't seem to get upset about those numbers. Doesn't fit their agenda unless they can figure out a way to blame Trump for those deaths in the wake of Operation Legend.

It's hard to run in flip flops.

Thank you for the response, CD. I appreciate your comments. I also think that some of it anyway is hatred toward President Trump and also wanting to be "part of something." The latter being a social event. Just like the girls and women who donned those stupid pink hats with cat ears. I'd read articles which the attendees said that they protested in the '60s, so this was the same kind of thing for them to get into. They'd go down to the protests with their friends and make a day of it. Ridiculous.

With the young age of many of the BLM group, I dare say that they have not been discriminated in any workplace and, probably, neither have their parents. In the Federal Government, blacks have risen to the upper echelons of the Agencies/Department(s). They have come up the ladder faster most of the time, also.

And, you are correct, CD. Re the "defund the police" part of the movement, they are referring to anybody in law enforcement and, in effect, are against law and order.

"Trees on My Walk — A Visual Diary" Exhibit

"Trees on My Walk — A Visual Diary" Exhibit

Weinberg Center for the Arts
$10

Performers include The Magic of Puck, magician and hypnotist; Scott & Jenny Alexander, m…

at participating locations in