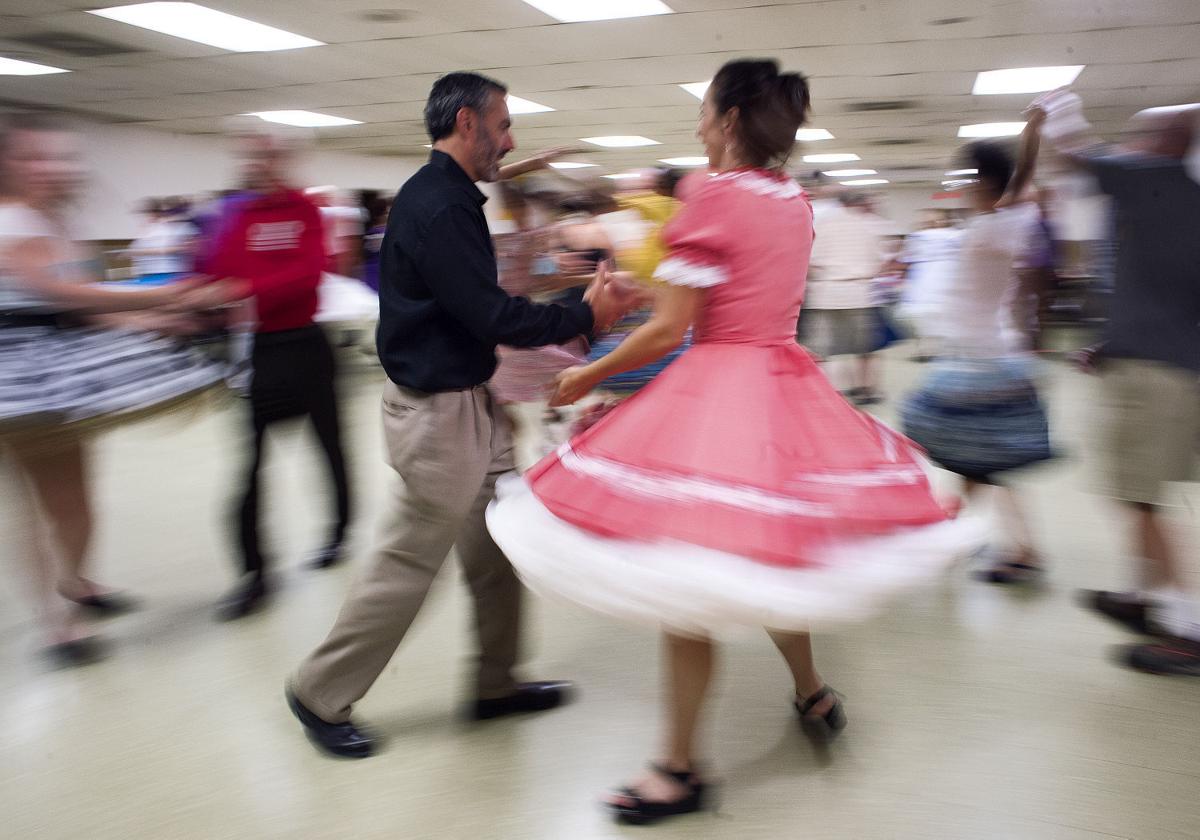 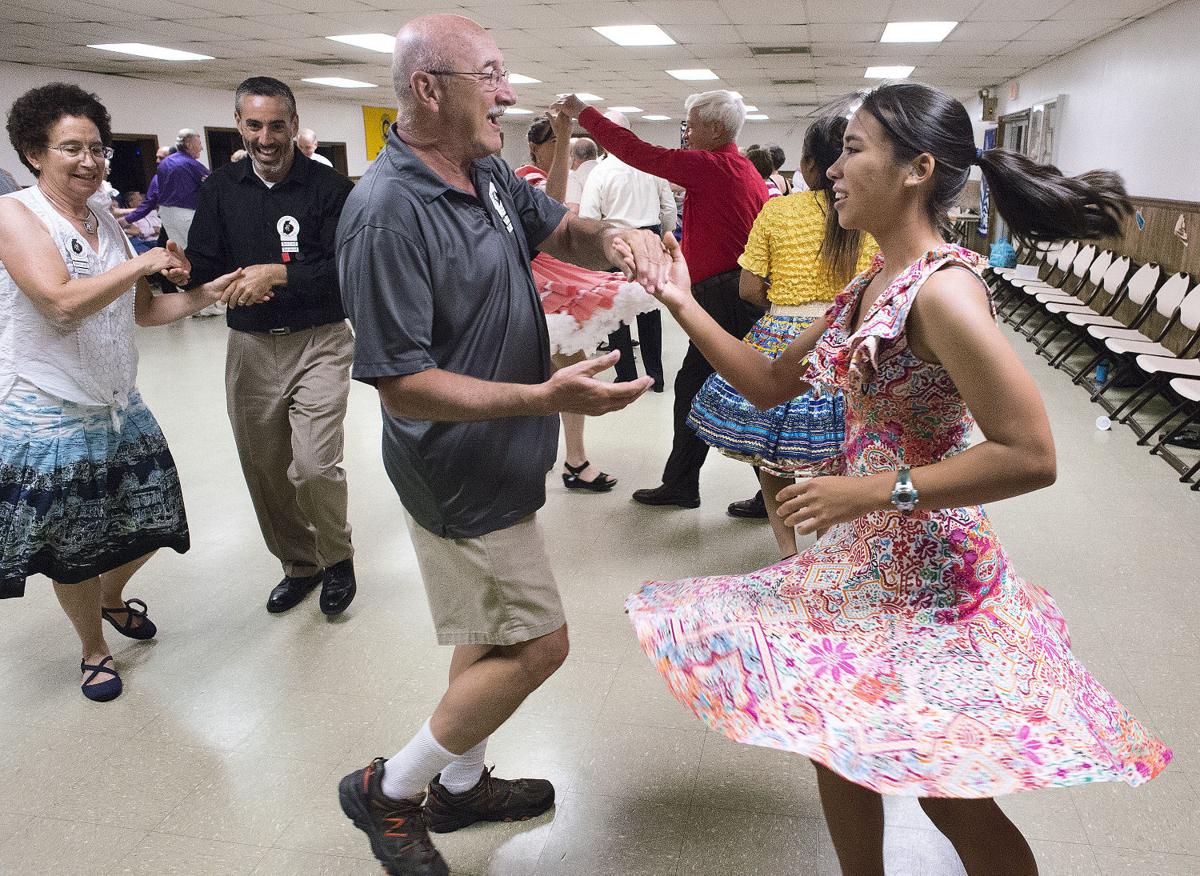 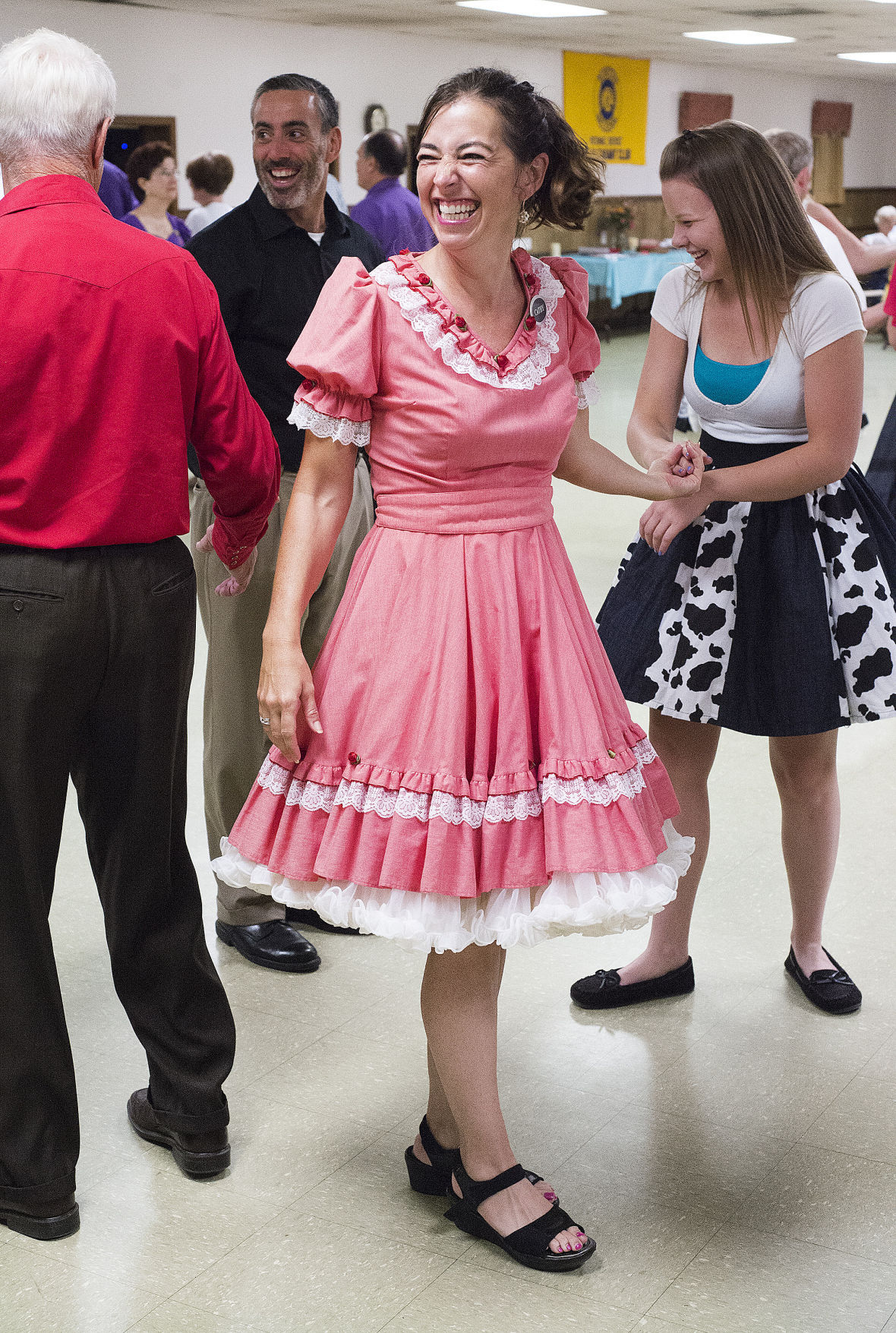 When I visited the Frederick County Promenaders’ square dance on a Friday night, I heard an unexpected sound. Instead of country music, pulsating rhythms reverberated outside of Mount Pleasant Ruritan Club. Promenaders’ leadership, including Marjorie Barber and President John Magnusen, greeted me with an overwhelming kindness. A few moments later, I was urged to join the dancing Promenaders who wore mostly traditional square dancing attire of cowboy shirts, bolo ties, and large ruffled skirts that spun to each twirl.

I decided I was too much of a newbie to get on the dance floor, but after eating pie and chatting with dancers, I was invited to step on the small stage and see from a caller’s viewpoint. I stood behind Dean Singleton, as his voice bounced to the rhythm of the beat. Squares of four dancing couples interwove, but somehow, arrived where they began.

There were many gray-haired dancers, but their beaming smiles seemed to come from a place of youthful energy. The event culminated with dancers hugging each other while Pharrell’s hit song “Happy” played in the background. I knew I had to explore square dancing for myself.

“I want to welcome you to our open house. Introduction to square dancing. You’ll find that square dancing is fun. It’s enjoyable, it keeps us moving, it really does,” Magnusen said the following week.

Open house was at the smaller Ballenger Community Hall in Feagaville, where dancers filled the hardwood floor room and sat on pews during breaks. Singleton set up a DJ table by the kitchen.

Square dancing lessons are taught from fall to spring and culminate with a graduation. Each lesson typically costs $8, but the open house and initial class I attended were free.

“Can we all form a big circle? Circle to the left. All in to the middle with a hey hey hey!” Singleton instructed new square dancers who came in jeans and other relaxed attire. An instrumental version of Robin Thicke’s “Blurred Lines” played through the speakers.

“It’s what we call zero movement, we end up exactly where we start from. Boys left, girls right. Shake left hand, that’s what we do in the square dance world. Then we go all the way up to the elbow. We’re going to pivot half way into the arm...left allemande...or allemande left...we’re really good, aren’t we?”

The new dancers let out an enthusiastic “Yeah!” but I silently crumpled in self-defeat. Square dancing is a lot harder than it looks. I wasn’t sure if I could remember which action followed each call.

“We’re going to pass right shoulders without touching our hips...everybody is moving at the same time. We’re not letting the girl walk around us gentlemen. Do-si-do your partner...fantastic,” Singleton encouraged.

I awkwardly walked around my partner not knowing how to both walk to the beat and to the speed of dancers around me. But fortunately, people were having too much fun to judge my fumbling moves.

Something happened about 10 minutes into square dancing. My body began to automatically move to each call. I started to enjoy the “I can’t believe I’m doing this” thrill with each twirl that brought me “home” to where I started.

During the breaks where dancers congregated over snacks and water, I spoke with Promenaders who emphasized the organization’s phrase that square dancing is “friendship set to music.”

“You got camaraderie...even if it’s not square dancing-related, people hang together, they’ll go on vacations together,” said long-time square dancer Ed Trever. “You learn [square dancing], and you can dance it in 40 countries. All the calls are in English. I got to dance in Disneyland to a Japanese caller...Sometimes they’re singing, they can be yodeling, they can be saying something in Japanese.”

Promenaders like Trever were quick to mention how easy it is to find a square dancing event all over the country. “You can look up online and say, here I am in Cincinnati or Los Angeles and you can go out that night and go dancing. That is the one thing [about] square dancing. They have a great reputation for being kind people. You have to be pretty nice to be with seven other people all the time.”

Sometimes, those seven other people in a square can be mostly women. “One of the things, we got to do a better job getting the men,” Trever added. His theory is that men are turned away because of square dancing’s family-friendly, no alcohol policy.

Another square dancing tradition is to place an identifier on a woman as “boy” if she is dancing the men’s role due to a lack of male dancers. In contrast, gay square dancing clubs such as Chi-Town Squares have no dress code and prefer gender neutral terms such as the “lead or follow position.”

Singleton doesn’t see the lack of alcohol as a problem, but he knows innovation is key to square dancing’s future. “It’s all gone modern. I’m not the only one doing rock ’n’ roll and stuff like that,” Singleton said. His love for rock music is evident in the dramatic guitar riffs that often accompany his calls. When an audience member requested country, Singleton playfully bantered before obliging.

Natalie Fogle is a 22-year-old Frederick Promenader who was named by many older members as proof that young people are getting into square dancing. Fogle was one of my partners who learned both dancing positions so she could stay on the dance floor. She first learned square dancing as a sophomore in high school with the help of her grandmother. “She came and took classes and fell in love with it and needed a travel buddy so I was her travel buddy for a while and then it stuck.”

On that late September night, Fogle encapsulated the challenge square dancing has to compete with a plethora of young adult entertainment. “I’ve always spread the word to my friends, but it’s the Frederick Fair, so they’re there.”

In my experience, square dancing is not declining from a lack of recruiting. Singleton planned my future year of square dancing shortly after meeting him. “There’s basic, there’s mainstream, and in this class, I’ll teach you all through mainstream. What you do is take another class right after and hopefully you become an angel.” Singleton made sure there was no reservation that would keep me from starting classes.

“And you won’t be the only one either. My fiancé’s black,” Singleton laughed. “Honestly there isn’t as much because of the roots of where it came from, but we have all races and everybody is treated equally.”

As a black woman, I could attest to that. At most square dancing events, I was greeted before reaching the door. The lack of African-American faces inspired me to research a time when that was not the case.

Folk music historian Phil Jamison discussed in a video that African influences is what made square dancing evolve into an American art form that is distinct from its European predecessor. “I believe that the first dance callers were African-American. The dance calling comes from the African tradition. There is a very strong tradition in Africa of call and response. Back as early as 1690, slaves were playing fiddles for white people’s dances,” Jamison explained. “Dancing masters owned slaves. They didn’t have a boombox, they had a slave who could provide the music.”

Today, Singleton’s fiancé Nina Grigsby sees a variety of ethnicities attending major square dance festivals. It is not uncommon to see an interracial family on the dance floor, but Grigsby does believe access is still an issue for African-Americans. She also had this discussion with another square dancer. “I told him I don’t think it has to do with the music, it comes down to exposure,” Grigsby said in a phone interview. “One thing that I was telling him is that I do think it’s more of how it’s exposed and when it’s exposed.”

I first learned about square dancing through TV and film where older white people danced to hillbilly country music. Because this exposure happened at a young age, this was my only viewpoint until I experienced square dancing first hand. If I grew up watching Grigsby enjoy advanced level square dancing, I could have witnessed the beauty of this art form much earlier.

Grigsby referred to the message that many square dance leaders say again and again. Friendship and camaraderie is the focus while “square dancing is just the byproduct.”

Tickets: First class is free, each class after is $8 per person and $20 for a family of three or more