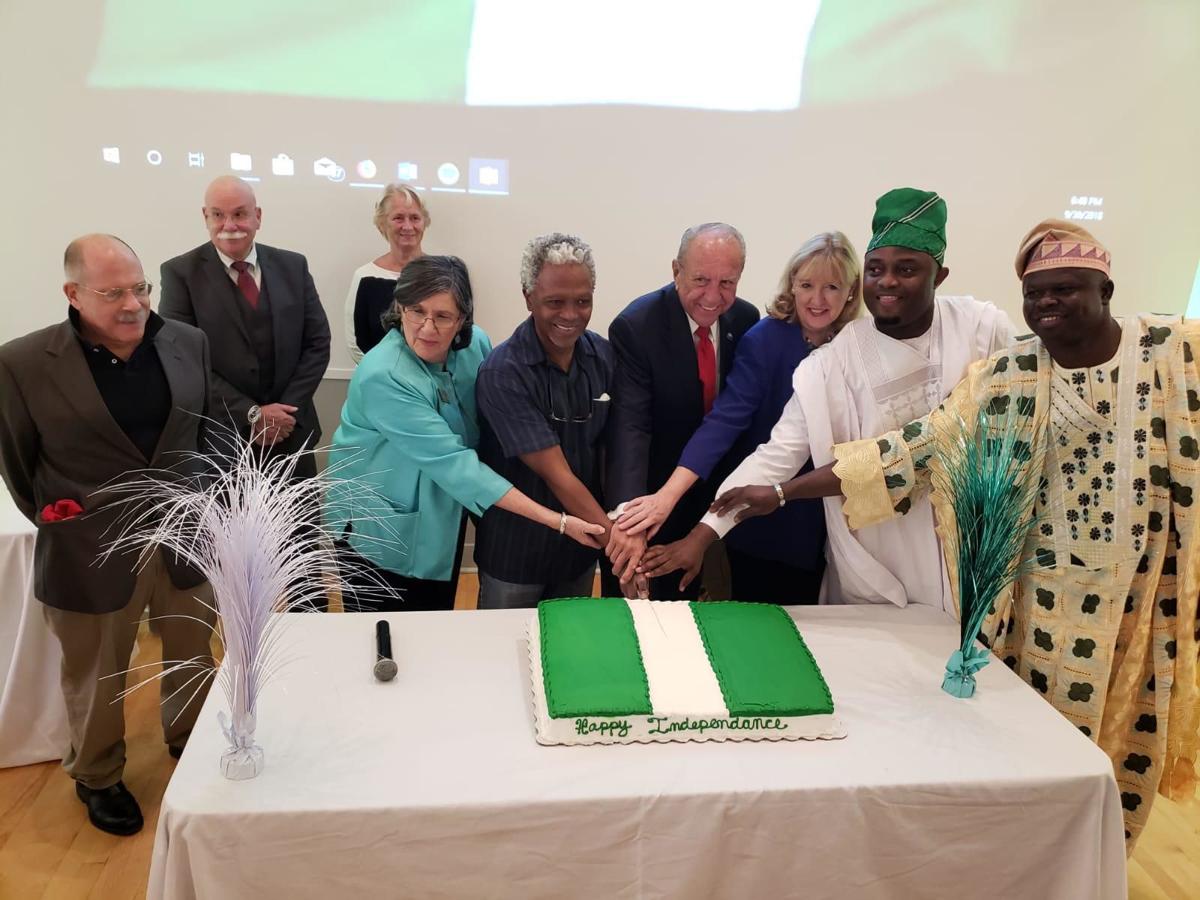 A picture from the 2018 Nigerian Independence Day Celebration at the Delaplaine’s Gardiner Hall. 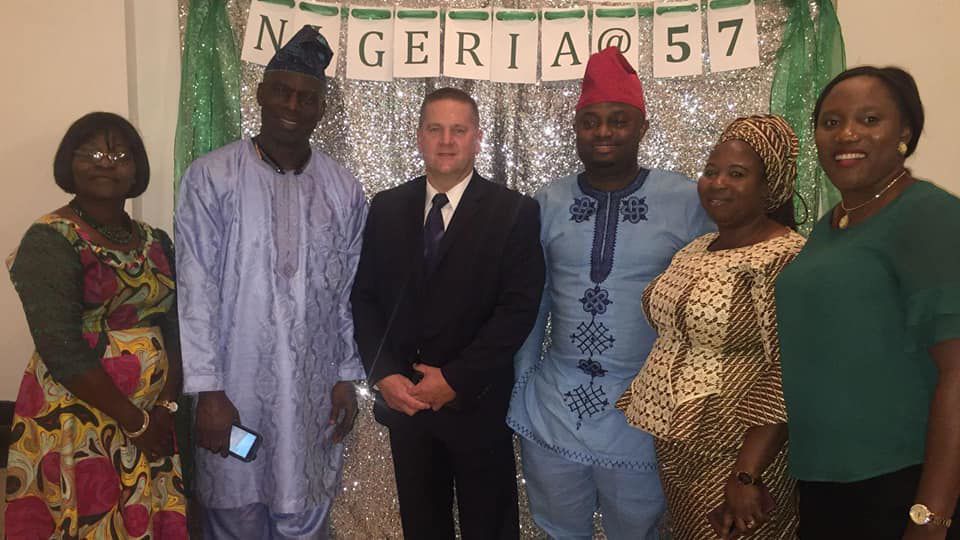 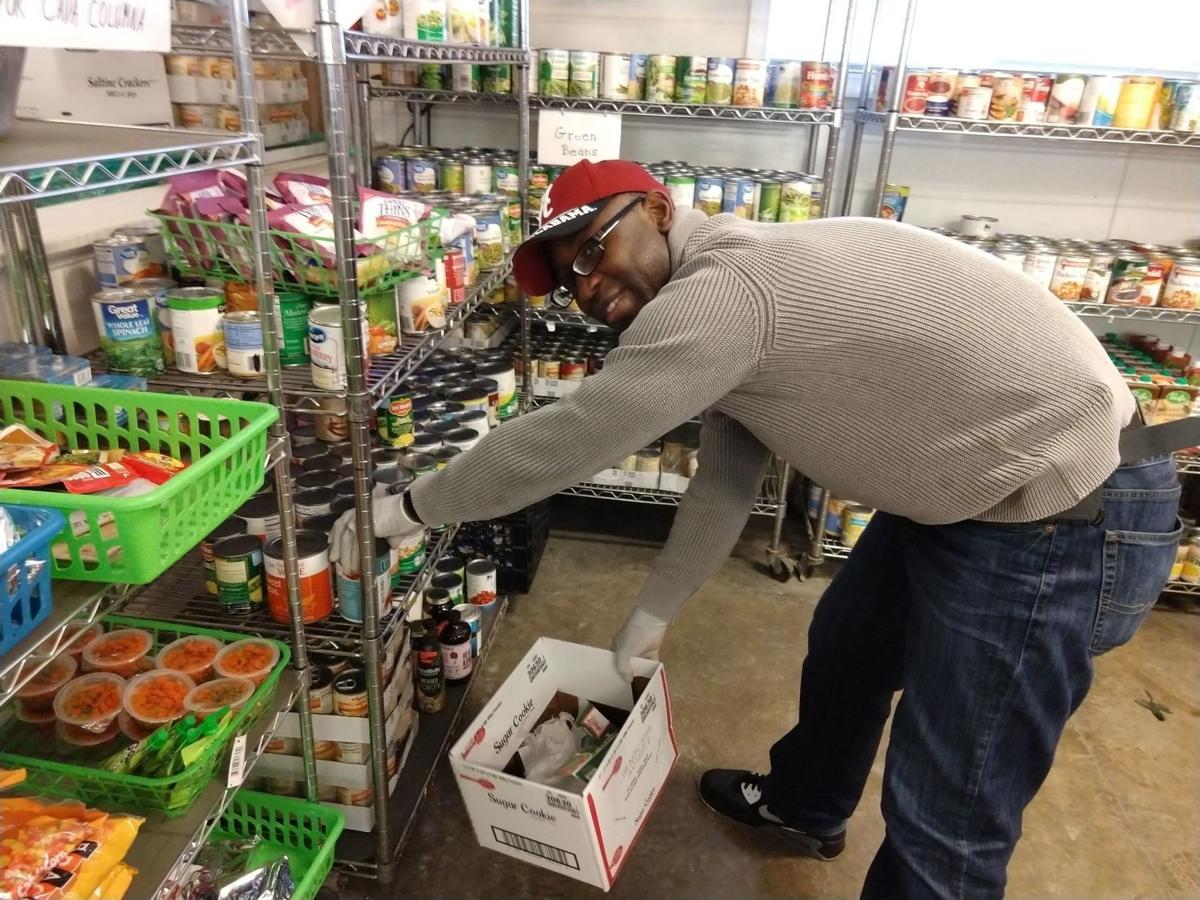 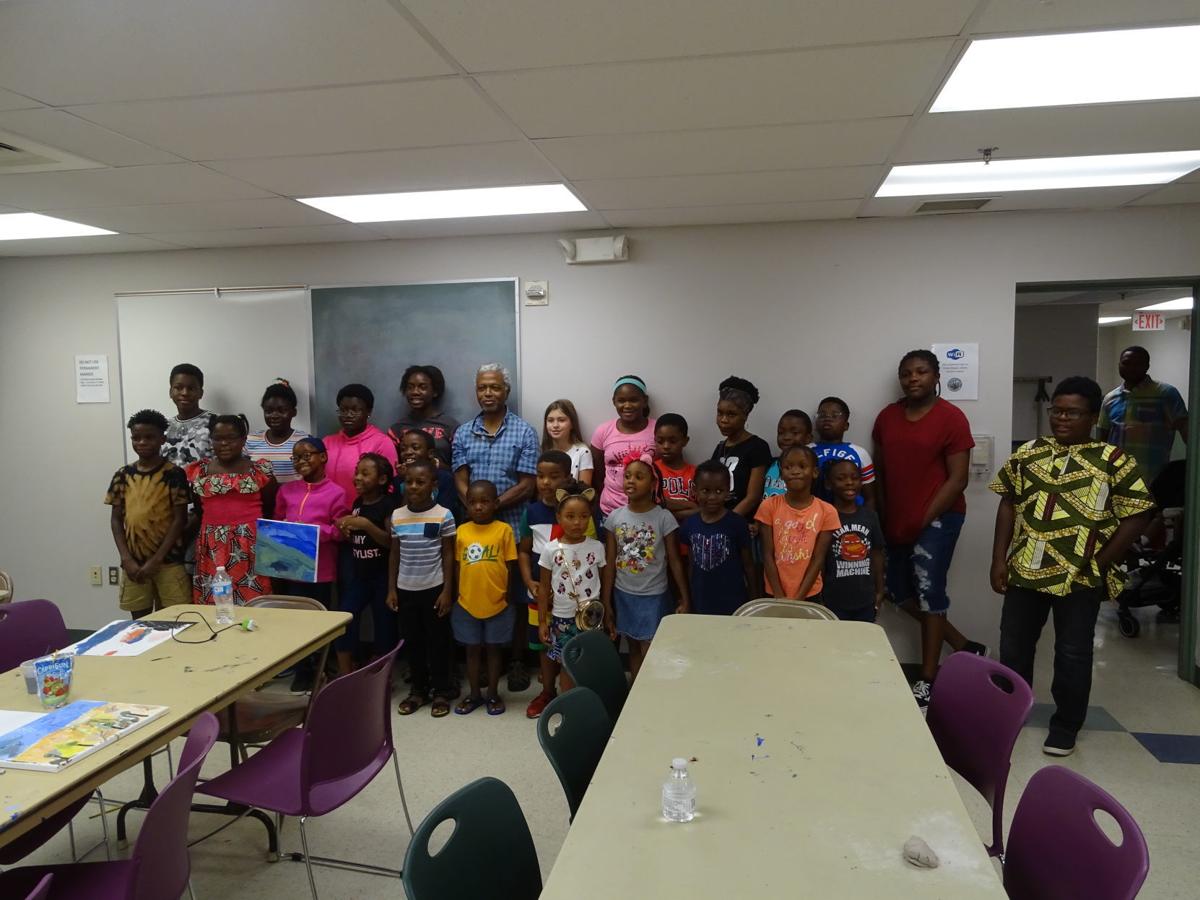 Nigerians in Frederick Association children and their friends in August at the end of an art class led by member Yemi Fagbohun where they drew and painted different items to be auctioned off at the upcoming Independence Day event. 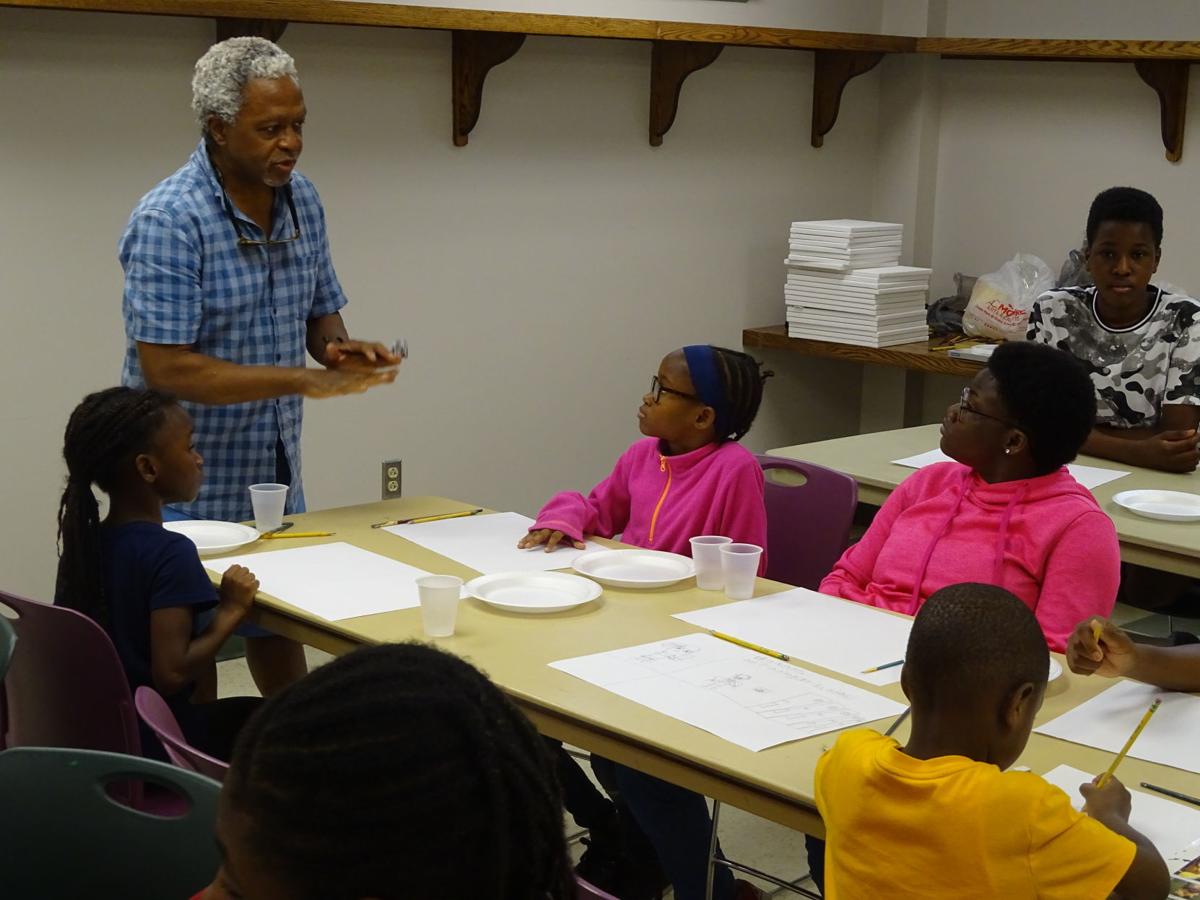 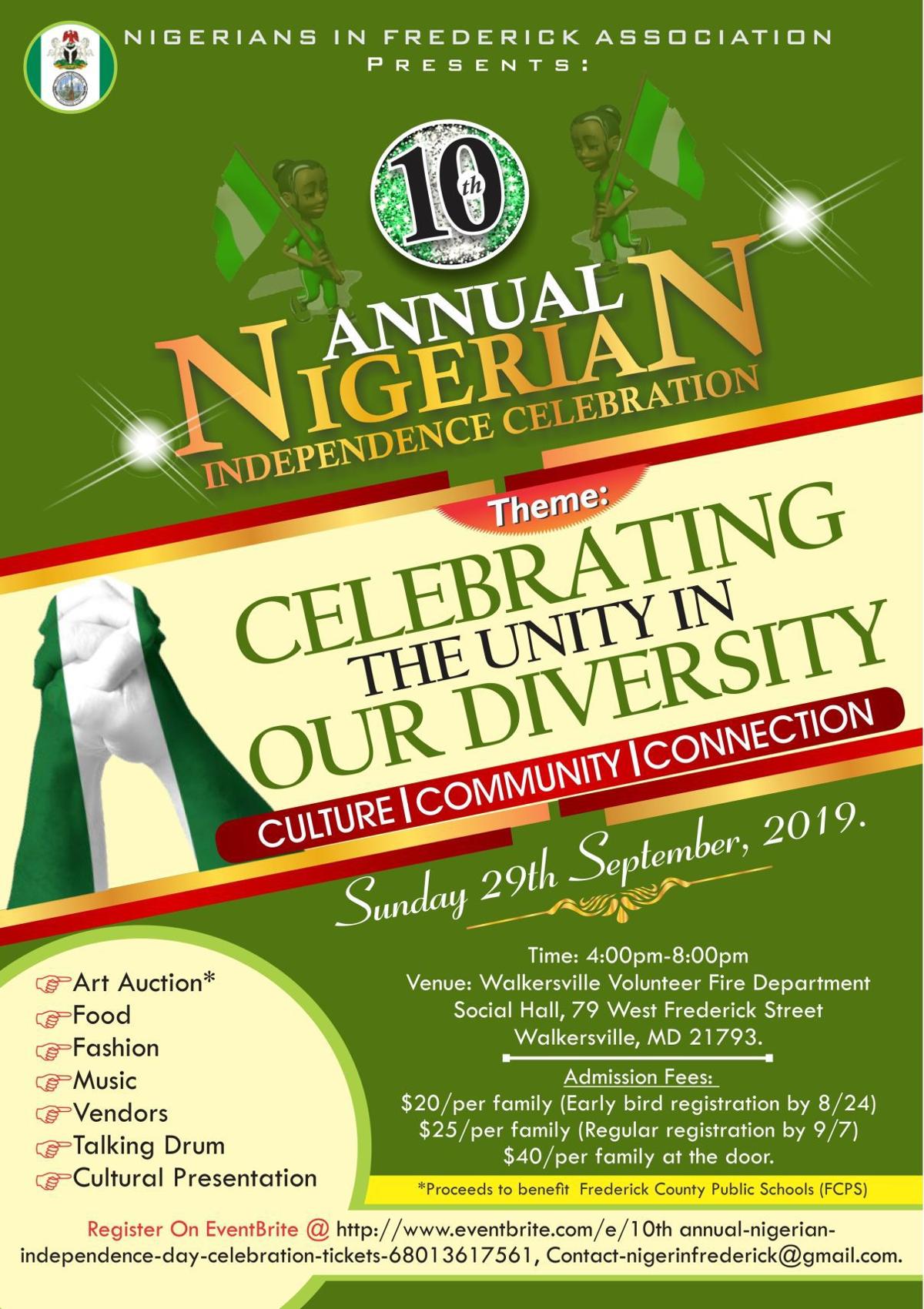 The Nigerians in Frederick Association is hosting its annual Independence Day Celebration this weekend.

A picture from the 2018 Nigerian Independence Day Celebration at the Delaplaine’s Gardiner Hall.

The Nigerians in Frederick Association is hosting its annual Independence Day Celebration this weekend.

The Nigerians in Frederick Association is gearing up for its 10th annual Nigerian Independence Day Celebration, and this year is bigger and better than years prior.

But before we get to the celebration, let’s talk about who the people in the association are and what they do in the community.

The association was formed in 2004 with just six members meeting in an apartment.

“We started as a group of friends before more people started joining,” Bayo Adeoye, a member of the group, said. “We live in a society with different cultures and we wanted to contribute our own culture into the development of the community.”

The association also strives to educate the community about their culture, help Nigerians new to the area transition seamlessly into American society and involve themselves in charitable work throughout the area.

“The organization really is about culture, community and connection,” said Yewande Oladeinde, president of the association. “So preserving the cultural values, creating a community for ourselves and other Nigerians in the area and also building connections.”

The group, which today has 39 members, holds other events throughout the year such as a Fourth of July picnic and an end-of-the-year get together. They also volunteer at the Frederick Rescue Mission and donate money to schools in the county.

Time is also carved out during each meeting they hold to educate Nigerians about different aspects of practical American life, such as filing taxes, resume writing or navigating health insurance.

In the future the group plans to create a Nigerian festival in Frederick as well as a cultural night in local schools.

While Nigeria doesn’t have to be their birthplace, members must have family members or ancestors who came from the African country.

The Nigerian Independence Day Celebration, which will be held on Sept. 29, is somewhat different this year because it’s based on a theme — Celebrating the Unity in our Diversity.

Nigeria gained its independence from Britain on Oct. 1, 1960, according to association members.

“Back home [in Nigeria] it’s a big celebration,” said Kolawole Tugbiyele, another member of the association. “So we’re celebrating them in a foreign land.”

Oladeinde said the reason behind the chosen theme was to bring everyone together.

“I’m not trying to get political, because that’s not the intention of the association, but there is a divisiveness in the country right now,” she said. “One of the things that we’re trying to do is to showcase our diversity as humans. It’s something that should be celebrated.”

She added that each of the members “bring something unique to the table.”

“Having people from different cultures come together, we may be different, but we’re still one in the same,” Oladeinde said. “We’re all a part of the U.S. but we still celebrate where we are from. We’re not a melting pot, it’s gone. We’re like a salad bowl where you bring something, I bring something and toss it together and mix it.”

Tugbiyele said the event is held to pass on the cultural heritage to children as well.

“It’s also for non-Nigerians,” Oladeinde said. “It’s an opportunity for them to experience Nigeria and the Nigerian culture without even leaving the U.S.”

Last year, the celebration brought out more than 200 guests. To accommodate a larger crowd this year, the association moved the festival to the Walkersville Volunteer Fire Hall.

Another change includes an art auction with artwork made by local children. All proceeds will go to two Frederick County schools to use for whatever is needed, Oladeinde said. At the time of the interview, they were unsure of what two schools would get the proceeds.

While past Independence Celebrations were free — the event was covered through sponsors and donations — this year the group is charging an admission fee to cover all festival costs.

Group members plan to take admission fees and put them toward charity organizations in the future.

Through the celebration, Oladeinde wants festival goers to take away that even though we all have different backgrounds we all bring something to society.

“We may look different, we may not sound the same as the typical American but we have something to bring to the table,” she said. “I don’t want you to just judge me based on the fact that I have an accent or I don’t look like you, but just see me as an individual.”

Activities for the event include authentic Nigerian food, fashion, music, a cultural presentation and more.

Admission: $40 per family at the door