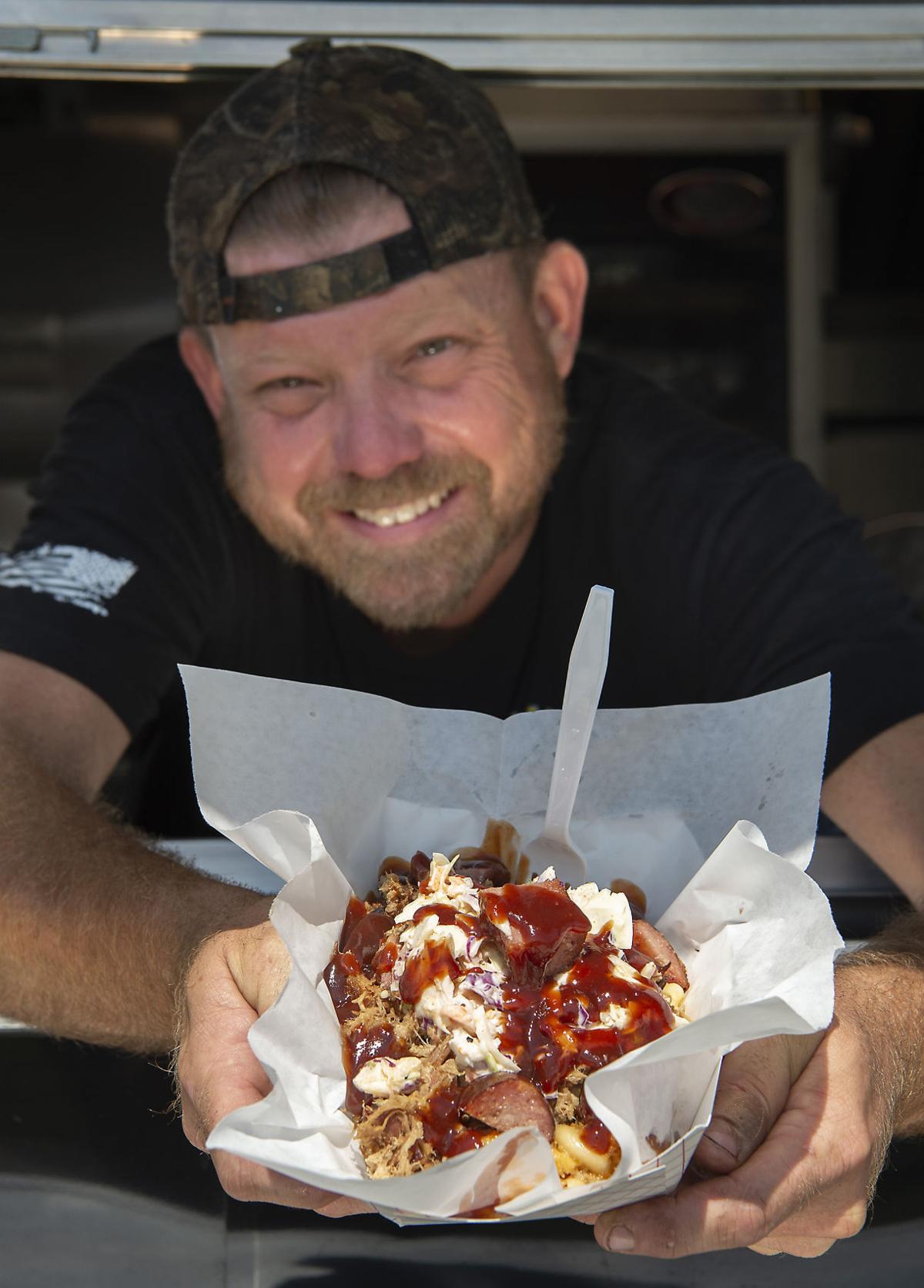 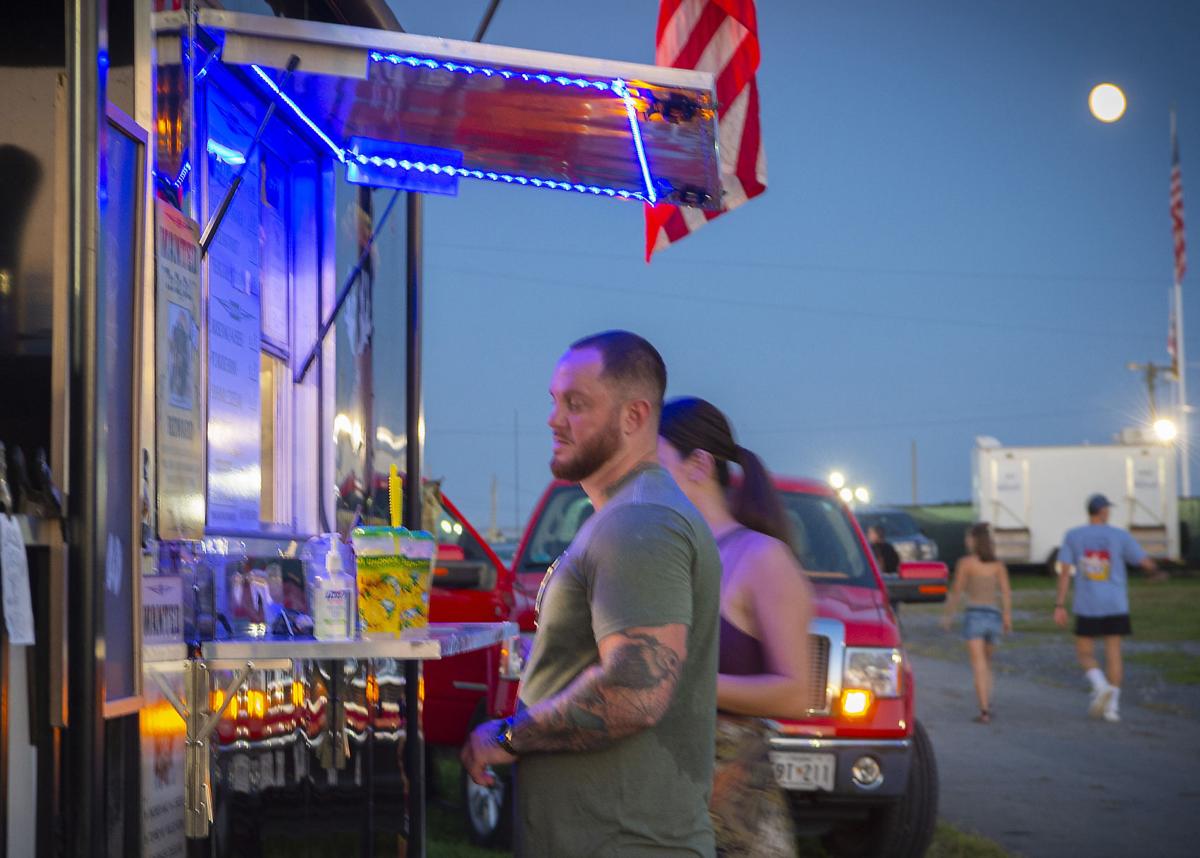 Late-evening diners order barbecue dinners from the locally-owned Moose Pit BBQ truck in the infield at the the Great Frederick Fair Saturday evening. Some of the barbecue is smoked for nearly 12 hours. 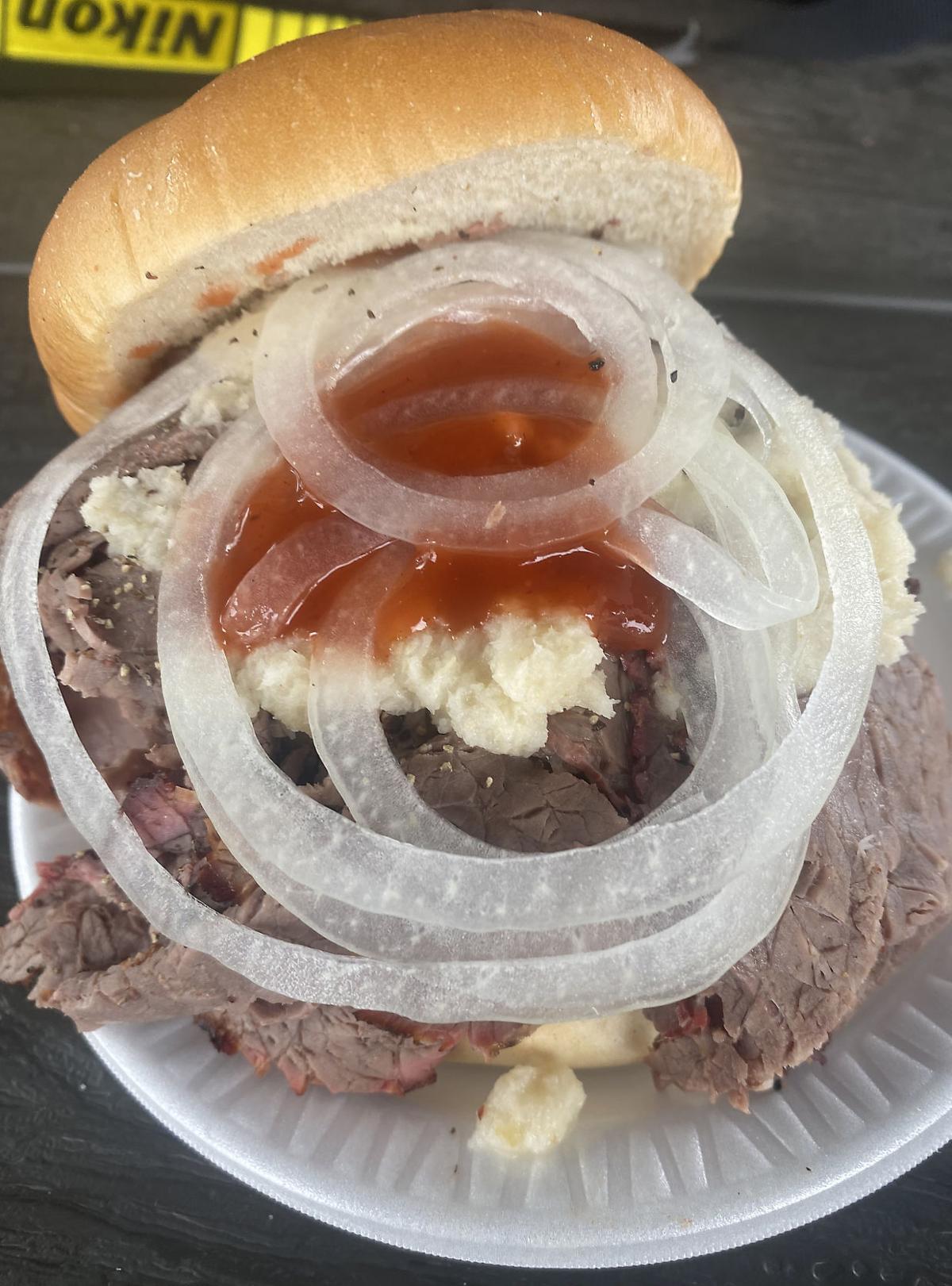 A tall smoked roast beef sandwich covered in onions, horseradish and barbecue sauce from the Hemp’s Meat stand at The Great Frederick Fair. A fan favorite, Hemp’s has been a fair vendor since 1986. 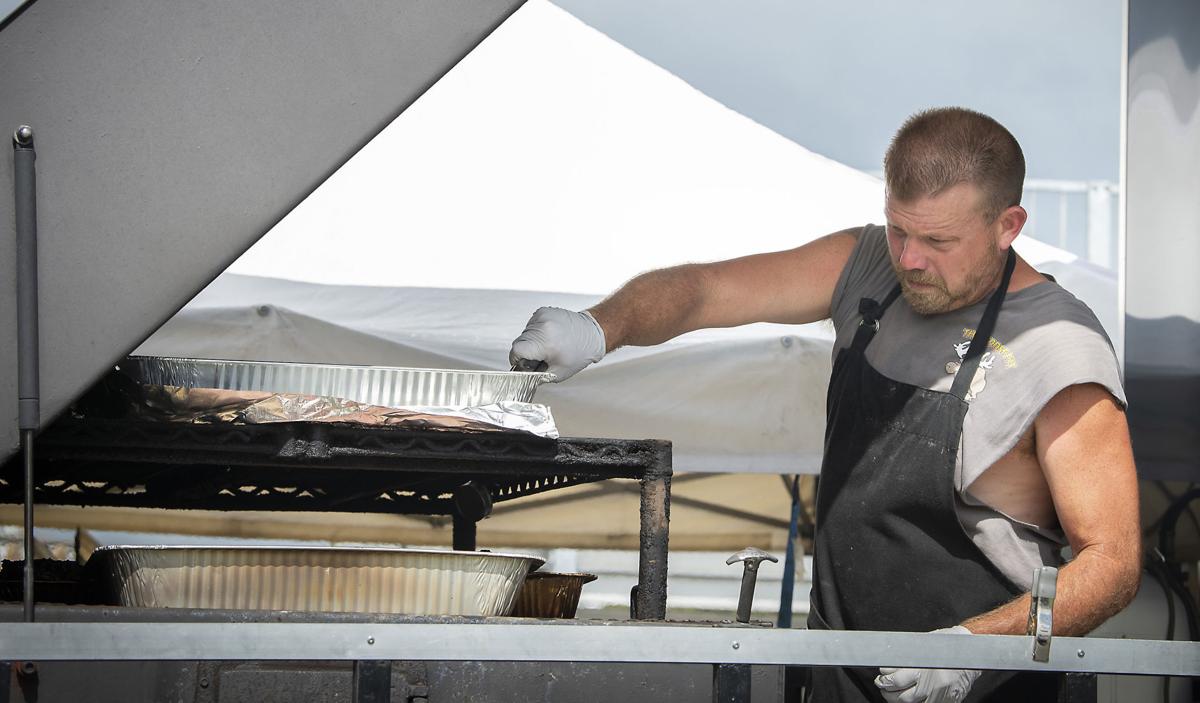 Steve Harding, owner of The Moose Pit BBQ truck, checks on meat he was smoking Friday afternoon at The Great Frederick Fair. He was preparing beef, pork and chicken in the infield of the fairgrounds in preparation of the opening of the fair. The meats cook about 12 hours before being served. 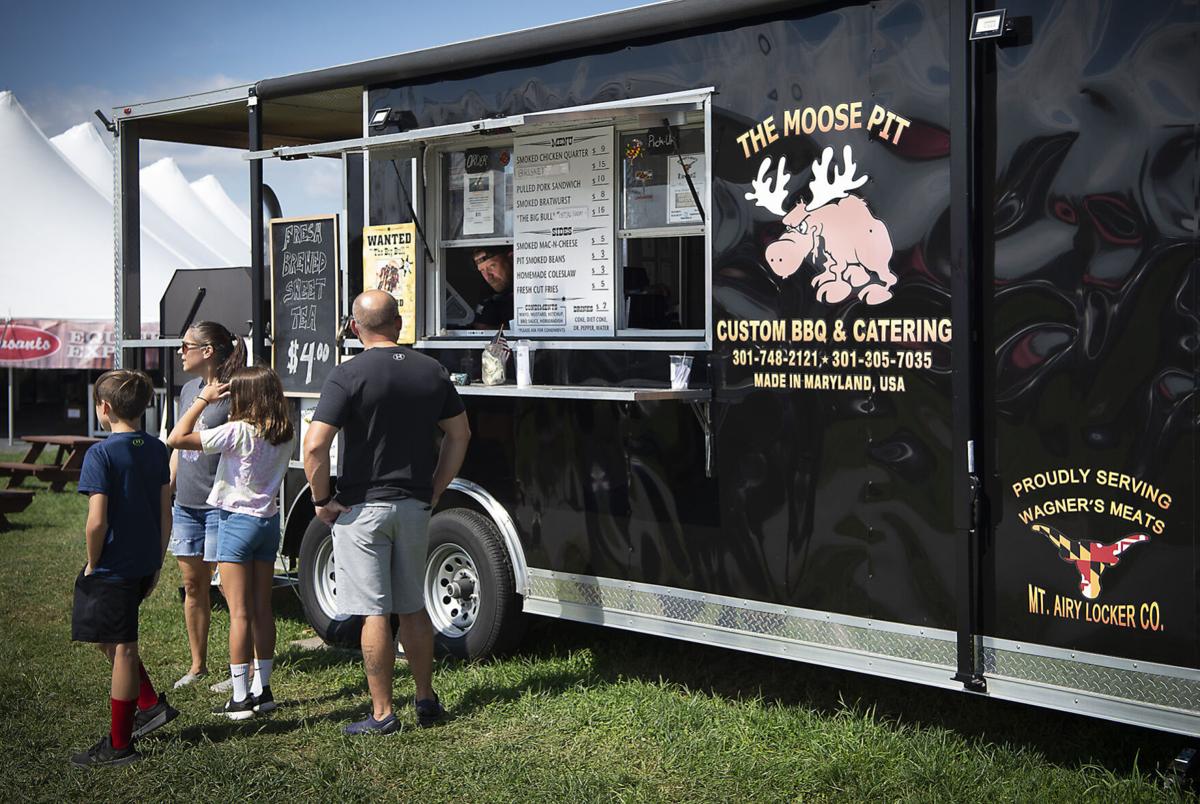 Moose Pit BBQ sets up shop in the infield at The Great Frederick Fair Sunday afternoon.

Late-evening diners order barbecue dinners from the locally-owned Moose Pit BBQ truck in the infield at the the Great Frederick Fair Saturday evening. Some of the barbecue is smoked for nearly 12 hours.

Moose Pit BBQ sets up shop in the infield at The Great Frederick Fair Sunday afternoon.

These are just a few of the crowd favorites at the Great Frederick Fair, which in addition to showcasing animals, products, rides, and live music, is routinely host to food vendors new and old alike.

Those vendors are back in full force for the 159th annual fair, generating long lines and heavenly aromas. One of the most well-loved eateries is Hemp’s, which has a permanent building set up in the infield near the entrance. The butcher shop in Jefferson has been selling sandwiches and other items at the fair since 1986, said owner Billy Hemp.

His personal favorite is the roast beef sandwich, and many fairgoers feel the same way. The lines get long around lunch and dinner times. And while the fair’s cancellation last year may have provided a respite from a busy week in theory, the butcher shop actually found themselves busy throughout 2020.

“More people were eating at home,” Hemp said. But even the craziness at the shop was not like that of the fair. “I missed it.”

Closer to the midway lies a 60-by-100-foot tent that seats 300 people, operated by JB Seafood of Myersville. The restaurant has been selling at the fair for the last 33 years, owner Chuck Staley said. Throughout the years, the vendor has grown in popularity. The operation now takes five days to set up and requires employees, friends and family to help run.

“We like serving the community and seeing people we don’t usually get to see throughout the year,” Staley said.

But New Market Grange has both JB Seafood and Hemp’s beat for longevity at the fair. The organization has been slinging burgers and hot dogs right near the dairy buildings for 92 years. Grange President Richard Stonebraker said that many nonprofit organizations, churches and fire departments used to serve food at the fair as a way to fundraise. But now, the Grange is one of the last ones left.

“Through the years, we’ve evolved. Our community service is at the heart of what really keeps us here at the fair,” Stonebraker said. “Doing what we’re doing is for the kids who are here showing, and the community.”

Stonebraker showed cattle at the fair himself as a kid. His own experience at the fair is what propelled him to ensure the Grange sold again this year, even after a tough year due to the pandemic. Like many other nonprofit organizations, the Grange’s membership is getting older.

“Getting enough people to help and the manpower to run a booth through the whole entire fair is difficult,” Stonebraker said. “But we went back and forth and we were like, ‘No, we’re there for the kids.’”

There’s space for newbies at the fair, too. Moose Pit BBQ, based out of Myersville, set their truck up on the infield. Co-owner Steve Harding explained that this is only the truck’s second year at the fair. As a lifelong fair attendee, Harding was disappointed to miss the festivities last year.

“We’re so happy we could be here this year,” he said.

The truck’s Outlaw Sundae has the makings of a new fair classic, thanks to its contents of mac and cheese, pulled pork, coleslaw, bratwurst and a drizzle of barbecue sauce. But Harding has a soft spot in his heart for Italian sausage and funnel cake, which he’s been getting at the fair since he was a kid.

“I looked forward to [the fair] when I was a kid,” he said. “It’s definitely a cherished thing.”

The unrelenting heat didn’t stop the crowds from coming out to The Great Frederick Fair’s first full day Saturday. From participating in tract…

Second show at 7 p.m. George Bailey has spent his entire life giving of himself to the peopl…

Weinberg Center for the Arts
Free, but tickets required, limit of 4

Second show at 7 p.m. George Bailey has spent his entire life giving of himself to the peopl…