Even now, 42 years later, Frederick remembers the impact the sci-fi blockbuster had on his life.

“It just blew you away, I mean, everything I’d seen up until that had been Disney and mainly ‘Herbie the Lovebug’ movies was what I was remembering, and, nothing against Herbie, but ‘Star Wars’ was just so much more,” Frederick said. “And then the toys came along and I could play with it and that was, I mean, that was my childhood.”

Now, as Friday marks the premiere of “The Rise of Skywalker,” the final installment of the most recent trilogy, Frederick residents are descending on theaters and reflecting on the legacy of the “Star Wars” saga.

Even after Frederick’s initial fervor for the franchise gradually died down following the release of the third film in the original trilogy — “Return of the Jedi” — in 1983, his love and passion for the characters and the story imagined by director George Lucas never truly went away.

What is your favorite “Star Wars” movie?

Buying a few of the toys issued with the re-releases originally to serve as fun accents to his desk at work, Frederick soon found himself collecting more and more memorabilia.

“It was kind of neat to have a little Luke [Skywalker] or a Gamorrean guard sitting on my desk, but that slowly evolved into getting more and more, and then the prequels came along,” Frederick said, gesturing to the two dozen figurines or busts of Obi-Wan Kenobi, another popular character and Frederick’s favorite, set up on his dining room table.

While Obi-Wan, a Jedi master who initiated Luke Skywalker’s training, featured prominently in the original series portrayed by legendary actor Sir Alec Guinness, most of Frederick’s figures and collection feature Scottish actor Ewan McGregor’s younger portrayal of the character from the prequel films that premiered between 1999 and 2005.

Stars Wars fans ready for the end of the saga 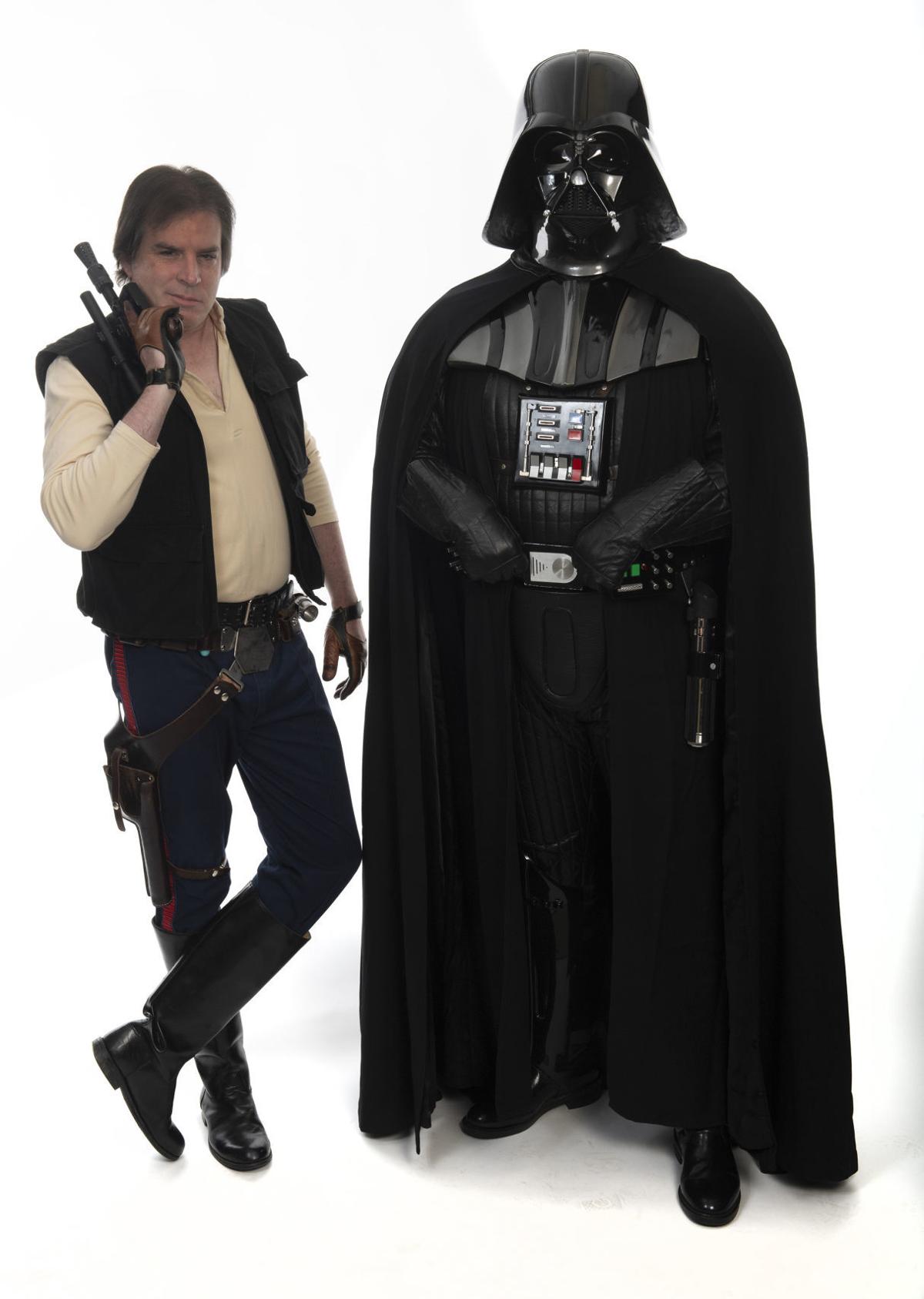 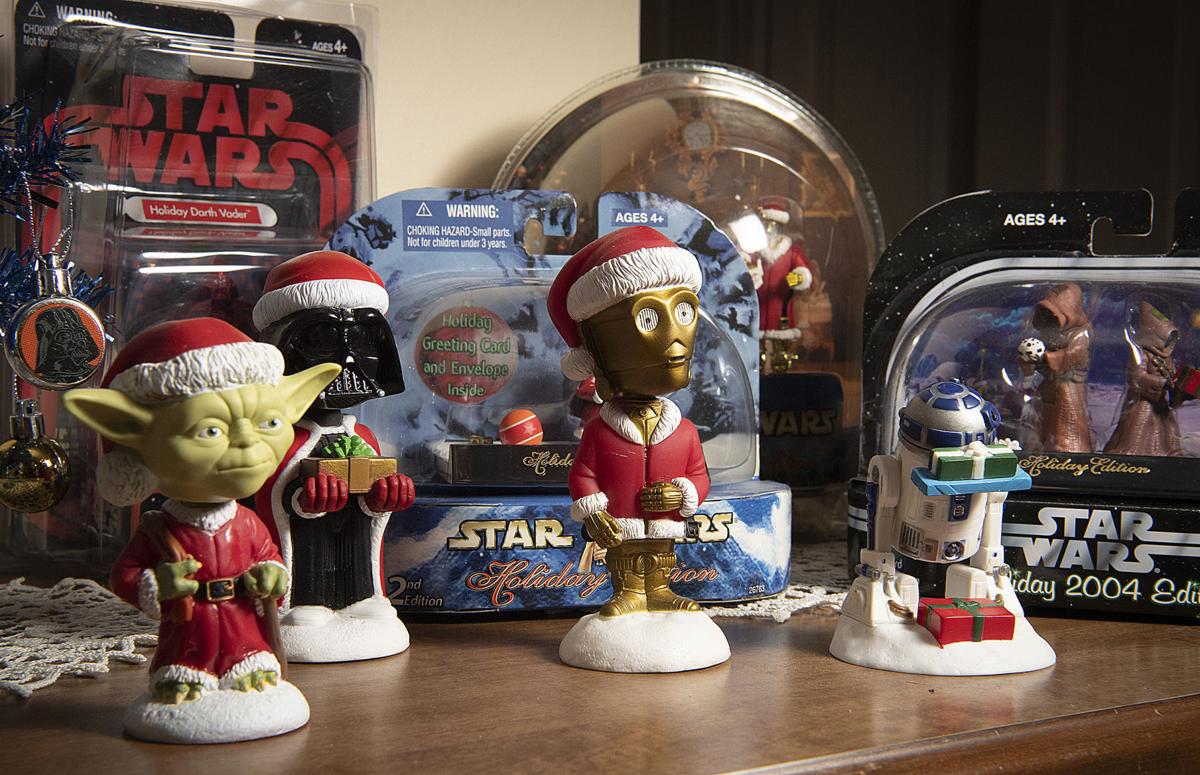 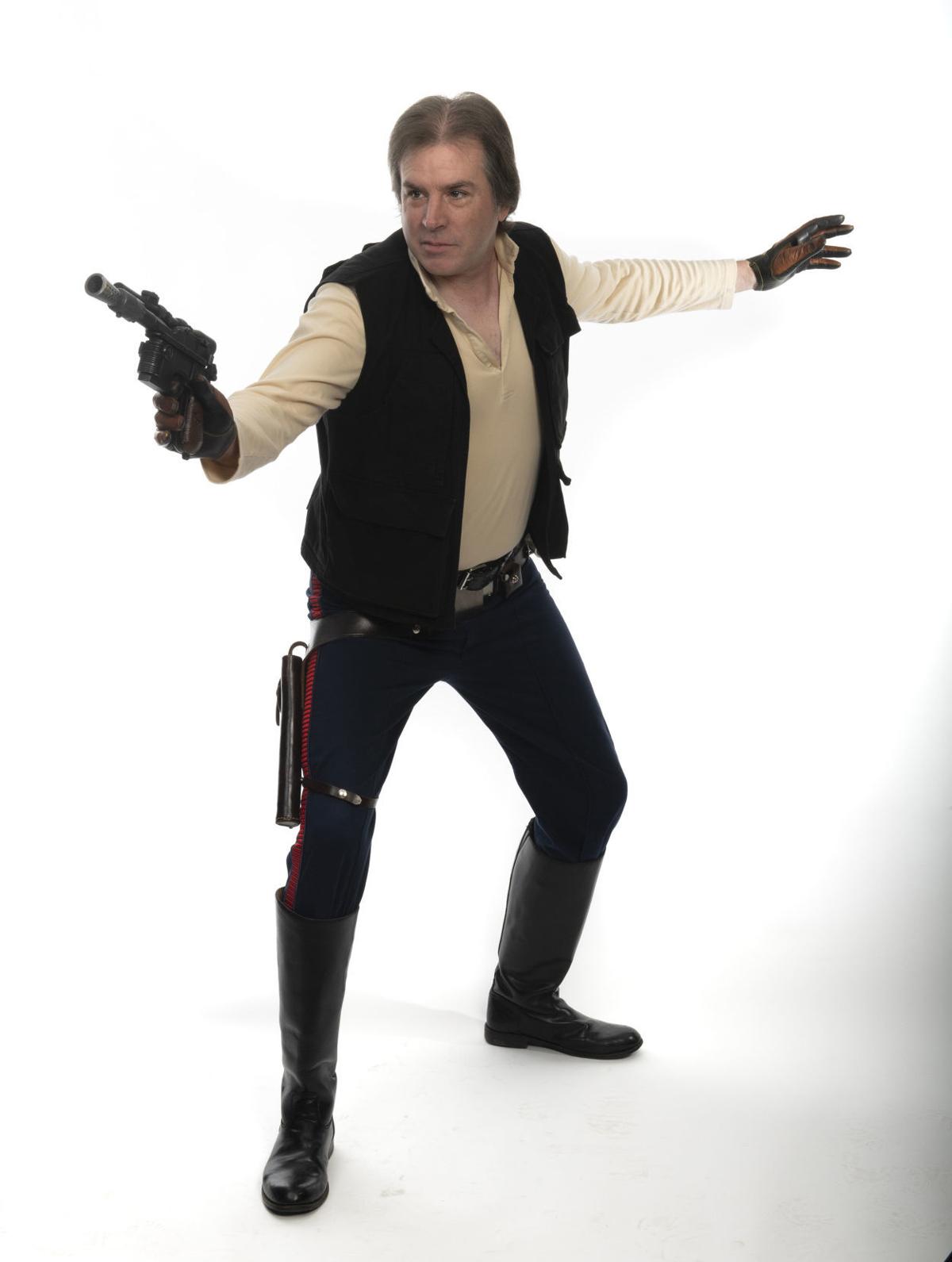 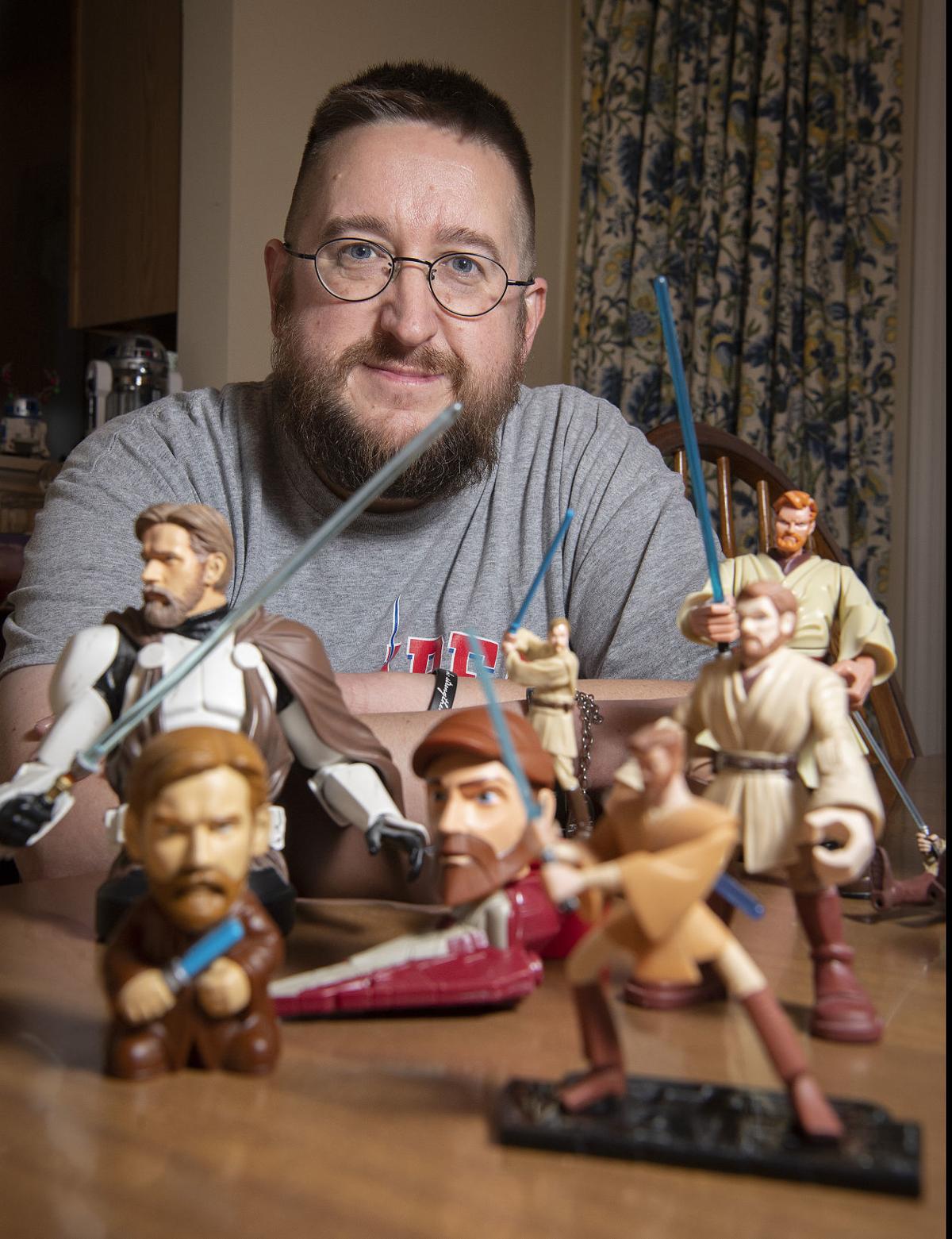 Brunswick resident Ric Frederick, 42, has collected “Star Wars” memorabilia for many years and was 6 years old when the film “Star Wars Episode IV: A New Hope” was released in 1977. Friday marks the premiere of the final installment of the most recent trilogy. 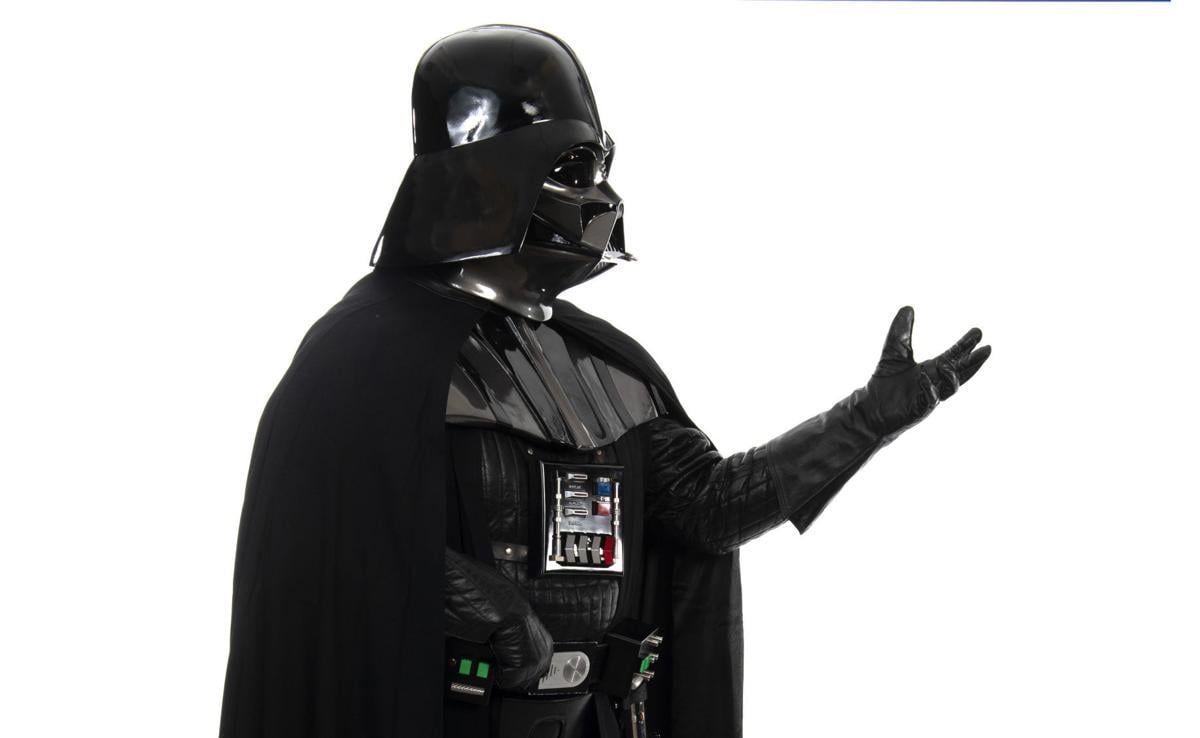 Fans at a whole different level

While some fans idolize the characters, plenty of others are drawn to the complex backstories of the series’ villains. Rob Cross, who lives in Woodsboro, didn’t think twice when he sold a collector’s set of armor from “Batman Begins” that he had on display in his home in order to buy his first Darth Vader costume four years ago.

Cross started out portraying a villainous Sith Lord — the opposite of the heroic Jedi Knights — of his own creation with a local group of lightsaber performers. Then he found himself briefly joining the Rebel Legion, a charity nonprofit organization made up of fans who dress up like “Star Wars” heroes to attend children’s hospitals and other volunteer work.

Soon, however, Cross once again felt the call to join the Dark Side and began searching for a Darth Vader costume to join the 501st Legion, the Rebel Legion’s counterpart nonprofit made up of fans who cosplay as Imperial Stormtroopers and other “evil” characters to entertain children and fans at charity events.

“I always thought, if I’m going to do any main face character, I’ve got to go big or go home, it’s got to be Vader,” Cross said as he donned what is now his third set of Vader armor. His first set cost him roughly $3,500, and included the Sith Lord’s iconic black helmet and chest contraptions, along with a breathing loop and voice synthesizer to help Cross match the menacing baritone of James Earl Jones’ original voice portrayal of Vader.

Cross said the expense is worth it when he attends an event and gets to see the look of awe in young and old fans alike when he strides into view, usually accompanied by an entourage of white-armored stormtroopers, the equally iconic foot soldiers of the Empire.

“They’ll see me and totally freak out. They’ll come up to me to get a picture and, a lot of times, that’s the first time people realize that they can interact with me, because, when they’re done taking the picture, they’ll say, ‘thank you for the picture!’ and I’ll reply, ‘You are most welcome,’” Cross said in his spot-on Vader impression. “And they just lose it all over again. ... And that’s really why we do it.”

Frederick resident Dave Turnbull, a friend of Cross who cosplays as Han Solo for the Rebel Legion, had a similar path to charitable costuming, taking his first steps in 2012 when he decided to attend a “Star Wars” celebration that a friend took his children to in Orlando, Florida.

Having bought a Han Solo costume online, Cross decided he wanted to get an authentic holster for the legendary smuggler, only to learn that movie-authentic replicas were as intricate and diverse as they were expensive.

Turnbull took his shot on a $500 holster and, armed with a few other accessories, found his costume was a hit in Orlando.

He ran into members of the Rebel Legion, who loved his costume and asked him to join the group. He submitted his costume that year and has been involved ever since.

The end of an era

Even though some fans may be sad to see the Skywalker Saga come to an end, Turnbull said he doubts “The Rise of Skywalker” will be the end of “Star Wars.”

“I don’t think there’s ever going to be an end,” Turnbull said.

Disney’s $4 billion purchase of the franchise from George Lucas before the latest trilogy was also accompanied by several spinoff films and now, a hit television series, “The Mandalorian,” airing on the Disney Plus subscription service. That’s a massive investment to not keep it going.

“I feel like there’s going to be more stuff. It might not focus on the Skywalkers, per se, but there will be more ‘Star Wars,’” Turnbull said.

Besides, fans have faced the prospect of the adventure coming to an end before. Lucas always envisioned the first “Star Wars” movie to be part of a larger series, but intentionally made the film’s narrative arc complete by its end just in case it didn’t take off. Fortunately, the series turned into two more movies, followed by three prequels. But even as that trilogy came to an end, Frederick remembers thinking the last prequel film, “Revenge of the Sith,” released in 2005, would be the last movie.

“I went 18 times to see it in the theaters, including four times on opening day, because I was like, ‘I might not ever get a chance to see ‘Star Wars’ on the big screen again,’” Frederick said.

In the years since, Frederick has taken to enjoying the latest films, toys and spinoffs with his 10-year-old daughter, Vivian Frederick.

Frederick is even able to draw parallels between his life and the character arcs of the heroes in his favorite films. He also gets to see the series through his daughter’s eyes.

Frederick Uncut: In a galaxy far, far away

Star Wars wrapped up its third trilogy last week with “Rise of Skywalker.” The film had mixed reviews, but for local super fan Rob Cross, it w…

This is front page news? And no coverage on local high school basketball sports.

Troubling sign, me and my daughter usually go see these together when they come out. She has no desire at all to see it. After the last Jedi and Solo movies she says she's done. Luckily we watch baby Yoda together so all is not lost.

Your poll should list the original movie as Star Wars ;)

Our family has run into the Rebel Legion (and 501st) members at multiple events, and they really are some of the nicest people I have ever met. Dave (Han) in particular has always been a stand out, and my kids love seeing him. Thank you to all of you for keeping Star Wars 'alive' for current and future fans :)

This is the last one? You promise? Dear Lord just make it stop...……… Seriously I don't really care what people are in to, all good for the economy I suppose but I've never understood the appeal. The again I liked "A Man for All Seasons" and "The Lion in Winter." That Van Gogh movie with Willem Dafoe was pretty interesting too. I saw the first one and I think I saw The Empire Strikes Back. That was enough for me thanks.

Keep your spoilers to yourself, folks :)