Sign Up
Log In
Purchase a Subscription
You are the owner of this article.
Edit Article Add New Article
You have permission to edit this article.
Edit
Home
News
Opinion
Sports
Topics
Calendar
Classifieds
Special features
Contests
Become a carrier
1 of 5 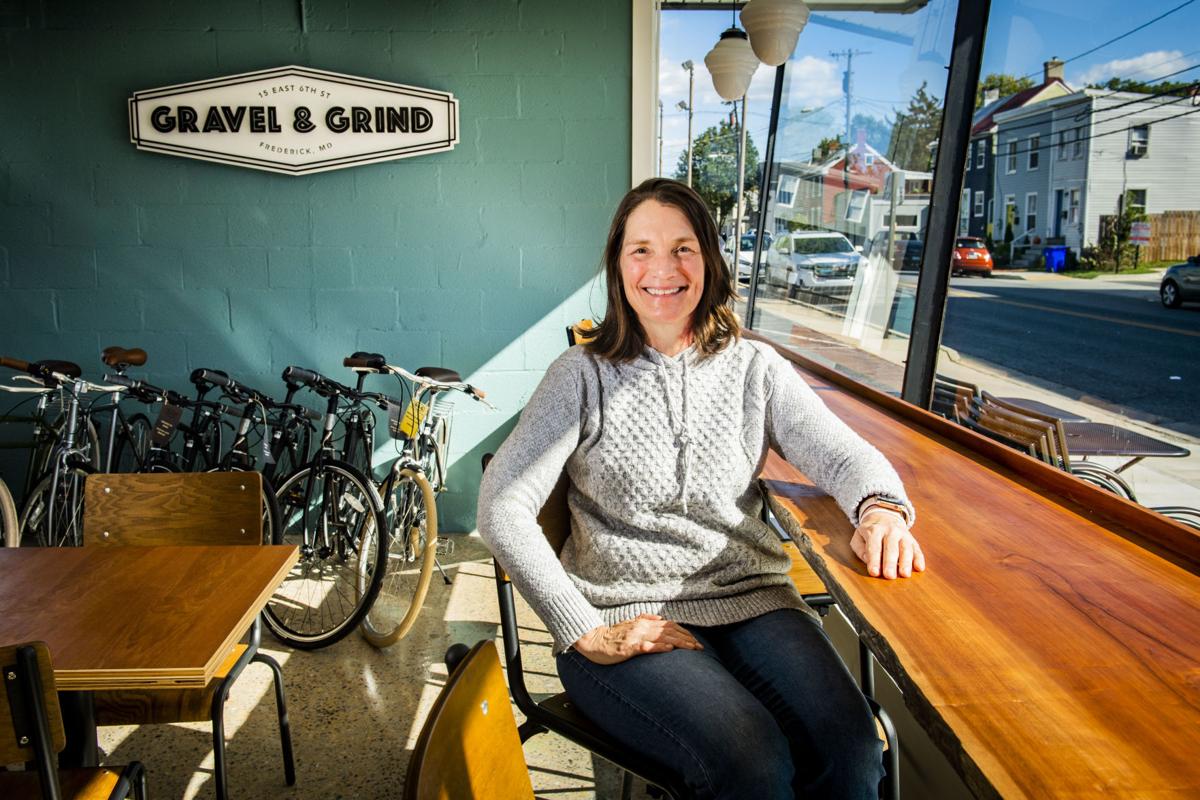 Owner of Gravel & Grind Tracy Hathaway sits in the shop’s new location at 15 E. Sixth St. The coffee and bike shop was formerly located on Carroll Street and held its grand reopening in October. 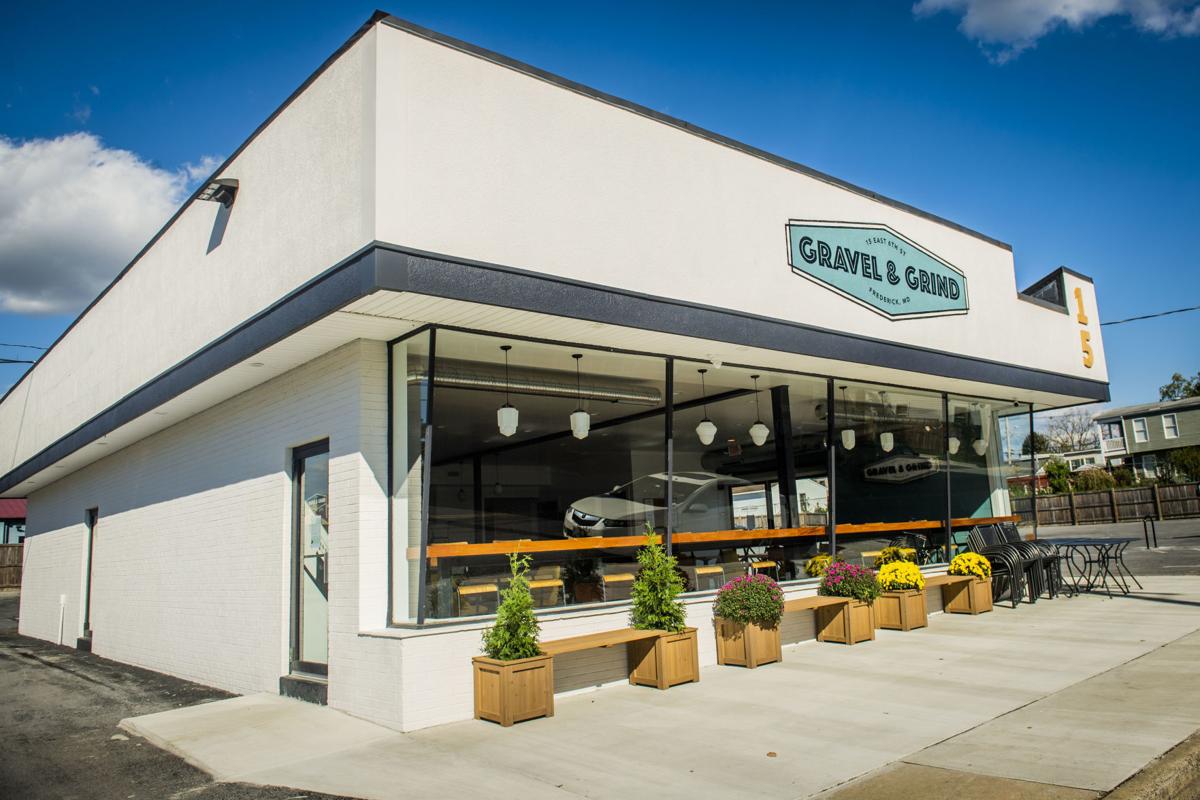 The new location for Gravel & Grind at 15 E. 6th St. on Monday. The coffee and bike shop was formerly located on Carroll Street, and will have a grand opening later in October. 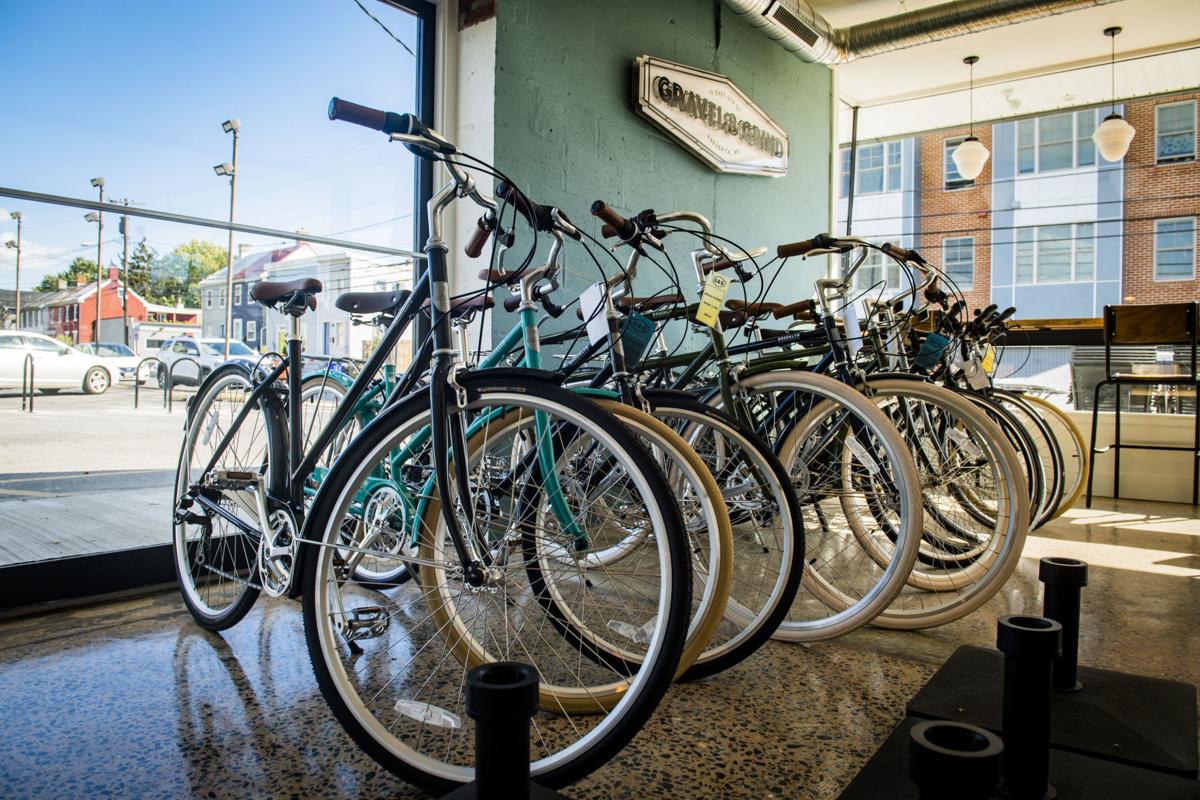 Bikes stand in the new location for Gravel & Grind at 15 E. 6th St. on Monday. The coffee and bike shop was formerly located on Carroll Street, and will have a grand opening later in October. 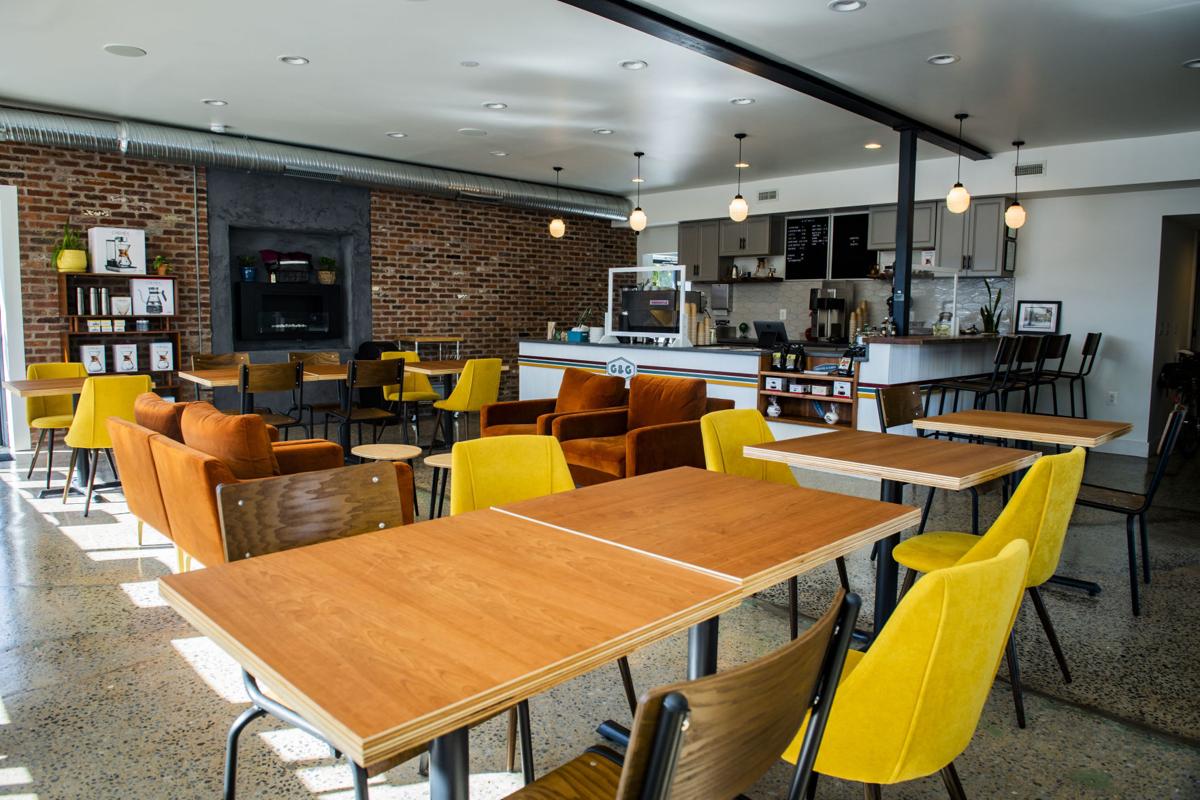 The mid-century modern interior of the new location for Gravel & Grind, located at 15 E. Sixth St. 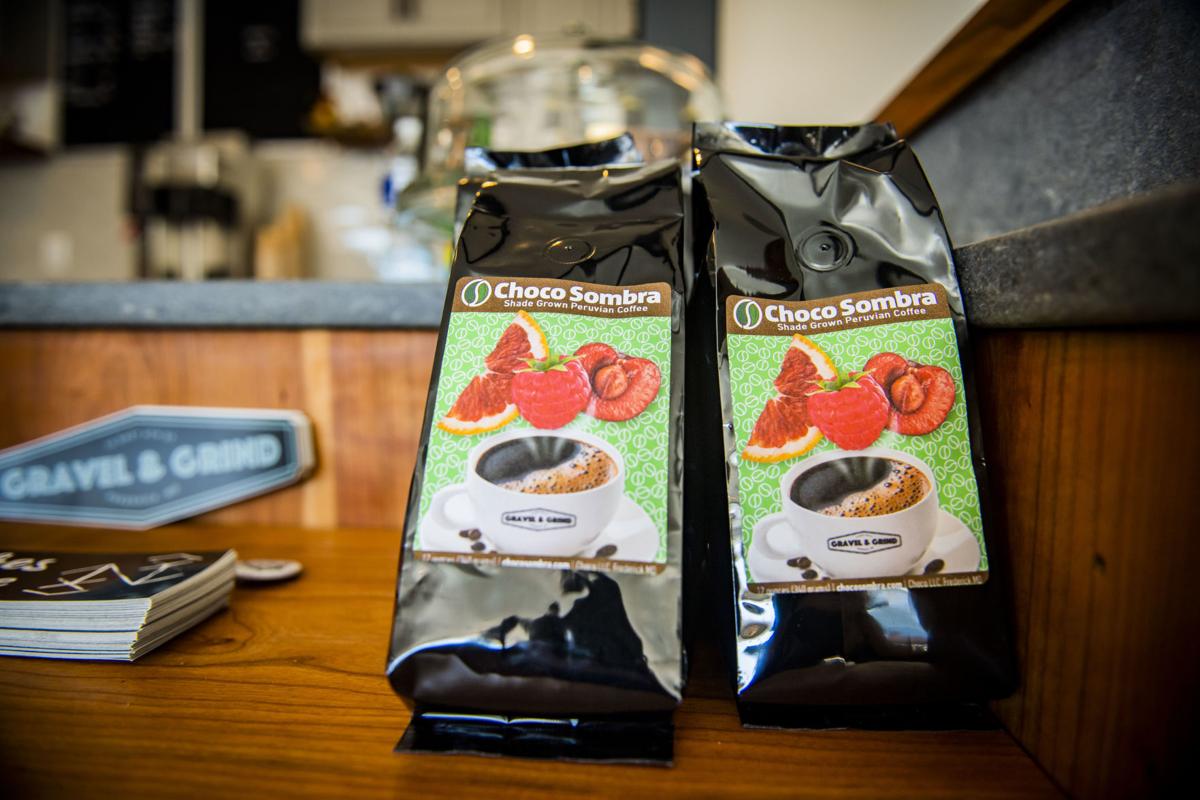 Coffee sits on display in the new location for Gravel & Grind at 15 E. 6th St. on Monday.

Owner of Gravel & Grind Tracy Hathaway sits in the shop’s new location at 15 E. Sixth St. The coffee and bike shop was formerly located on Carroll Street and held its grand reopening in October.

The new location for Gravel & Grind at 15 E. 6th St. on Monday. The coffee and bike shop was formerly located on Carroll Street, and will have a grand opening later in October.

Bikes stand in the new location for Gravel & Grind at 15 E. 6th St. on Monday. The coffee and bike shop was formerly located on Carroll Street, and will have a grand opening later in October.

The mid-century modern interior of the new location for Gravel & Grind, located at 15 E. Sixth St.

Coffee sits on display in the new location for Gravel & Grind at 15 E. 6th St. on Monday.

“What is dead may never die,” so the “Game of Thrones” reference goes.

Those in the know respond (paraphrasing), “The dead will return, stronger than before” ... or something like that.

That call-and-response will be put into play when the venerated coffee and bike shop Gravel & Grind officially reopens to a new location on the north side of downtown Frederick this weekend.

But for the benefit of the uninitiated, some context is needed on what all the fuss is about.

After closing the original shop on Carroll Street in 2018 following an amicable split between co-owners Tracy Hathaway and James Johnson (the latter having moved his bike operation to Vermont), it has since lived on in the memory banks of Fredericktonians who frequented it. Loyalists refused to remove their “Slow Coffee/Slow Bikes” G&G bumper stickers. Rivendell bike sightings in the streets, with its custom craftsmanship, steel-frame build and leather seating, is a direct link to the first Gravel & Grind, another imprint left on the cityscape. Akin to the effect when wearing Pitcrew gear, anyone can elevate themselves to a new localista level simply by wearing a G&G shirt with the cryptic runes design strewn over it.

But on Oct. 23, after a soft launch and much anticipation, Hathaway, along with former-customer-turned-business-partner Matt Donahue, will officially unveil version 2.0 of Gravel & Grind at its new location on Sixth Street.

Donahue assisted Hathaway with securing the building, saying, “It was a unique mix, where it was a little off the mainstream path and offered a lot of features that the previous Gravel & Grind didn’t have. … Architecturally it’s cool. It’s unique. It wasn’t just any old storefront. It had character.”

Rewind back to 2015, when the quirky business first came to town and quickly grew a cult following — a Venn diagram collision of musicians, artists, writers, bicycle enthusiasts, home-schooling parents, weirdos and coffee aficionados all came with a mutual desire for their flavorful pour-over brewing method of slower paced coffee, a bold arrival of third-wave coffee to Frederick.

G&G went beyond the shop, too, hosting bike rides in the city and bikepacking excursions to hidden riding trails through woodsy and countryside landscapes in the surrounding area.

It was clearly more than just a shop. They added significantly to the last cultural wave in the city, hosting shows from acclaimed local bands Heavy Lights, Cheshi and Middle Kid, among others, within the intimate confines framed by massive timber beams supporting the old granary building. Highlights among past shows included a rain-diverted Sky Stage concert relocated inside G&G with national-touring artist Michael Nau from Cotton Jones and Frederick’s own Mr. Husband. A birthday celebration for local artist Ashley Hoffman featured Twin Jude and the Qodesh collective. Those lucky enough to witness them saw these shows transform G&G into a Rhizome DC-like underground music venue.

One peculiar aspect to the original shop was found in a special corner: a mid-’70s turntable and complimenting sound system. Nearby, crates of LPs provided customers an opportunity to drop the needle on their long-play album side of choice. In heavy rotation: Dirty Projectors, Jose Gonzales, LCD Soundsystem and the Evens.

“When we stopped doing it, I had no expectation of what the future was going to hold,” said Hathaway, ruminating on the close of G&G. She moved back to work on her parents’ farm in upstate New York. “It was a good time for me to be on a tractor, reflecting on all that was, and just trying to figure out what was next for me. It was lovely, but … I realized it’s not where I wanted to settle down.”

As she put it, “Frederick got into my blood.”

It wasn’t until she left that she realized Frederick was home. “It is such a great, warm community. People are super friendly, and it’s beautiful bicycle riding around here out into the farmland,” she said. “I learned this is where I want to be.”

Fast forward to February 2021, when collective joy erupted on social media as news broke of Gravel & Grind’s securing a location on Sixth Street to be operational later in the spring. The anticipation for the opening date, delayed several times due to the pandemic, has been on simmer. Curious onlookers could be seen peeking through the windows to observe the remodeling inside the former post-war era car dealership.

In late September, an image with a cup of coffee on Instagram signaled that G&G would throw open the doors to the public with a series of soft opening dates, albeit with limited hours, to test drive the new system.

There was a steady stream of customers flowing through the doorways during those trial openings. When asked what was going through her head seeing the crowds return, Hathaway observed “how surprisingly normal it was.” She and returning barista Kristi Squires felt like they hadn’t missed a beat from the last day of the former G&G to the reopening in its new location.

“The other part was seeing the faces, the friends we made, come back in,” Hathaway remarked. “We all were just kind of picking back up where we left off.”

G&G on Sixth Street has been filled with old and new faces.

Cody Marwine, the owner of Perfect Truffle, said he had not been to G&G 1.0. Though he had heard about their rep, he’d never made it there before they closed three years ago. Talking about what brought him in to the new location, he explained he had been exposed to coffee cultures in other cities like New York. Pointing to a small glass next to his espresso cup, he said, “There, you get an espresso and you get a little seltzer … and I’ve never seen anyone down here that actually does that — like automatically [except here]. That’s what drew me here.”

Alyssa Boxhill wears many hats, but as a fixture in both the music and biking community, she was a natural fit at G&G 1.0. She came to the soft openings, along with many of the old crew, and said, “I actually wasn’t much of a coffee drinker when Gravel & Grind first came to be. What drew me at the time was an unconventional attitude toward cycling and bike culture, built around having adventures. Making friends there was really meaningful for me.”

When Aaron Watson’s complex folding bike needed repairs, he took it to REI — only to discover they botched it and made it worse than before, he said. He asked Boxhill for advice, and she recommended Gravel & Grind’s mechanic Scott Seigal. “This is the only place,” Watson recalls her saying. His Brompton folding bike was fixed. Two weeks ago, Watson walked over to v2.0’s trial opening and raved about their Johnny Cash drink (double shot chocolate/orange blossom/nutella latte) making a return from the old menu.

Gravel & Grind 2.0 is different aesthetically, with its industrial, mid-century vibes, a contrast to the dark timber look of 1.0. Yet there’s similarities, too, like the side coffee bar to the right of the counter, where patrons can chat it up with the baristas, much like in version 1.0.

ChocoSombra’s sustainably sourced, shade-grown coffee from Peru and roasted in Frederick also makes a triumphant return, as well as the custom bike build-outs in the back. Customers will be able to ride into the shop and get bike maintenance while waiting for coffee. Before it gets too cold, Hathaway envisions starting the rides back up again.

As for music, Hathaway is waiting for the City of Frederick to give the green light for live concerts in the adjacent parking lot. Her business partner, Matt Donahue, said of adding shows to the mix, “all of that will hopefully be more than a bike/coffee shop, but more of a centerpiece fixture for what we want to see on this side of town.”

Not to give all the spoilers away about v2.0, suffice it to say, there will be more to explore, with all the experiences, adventures and conversations just a bike ride away.

Roy Ghim is a freelance writer when not coaching youth soccer for FC Frederick. Follow him on Instagram @westernmachines.

As for music, Hathaway is waiting for the City of Frederick to give the green light for live concerts in the adjacent parking lot. So what will that mean for convenient parking for Olde Mother and other businesses?

Welcome back! Be there asap.

And they sell steel bikes? Sounds like a setting for a sitcom.

Great article, great thing. And the gang at Olde Mother's across the way. This is super.

Congratulations on the re-opening! Excited to try out the new location.

Bob O’Conner will present “Mrs. Sarah Slater is the Missing Lincoln Conspirator.”  She was a…

Bob O’Conner will present “Mrs. Sarah Slater is the Missing Lincoln Conspirator.”  She was a…