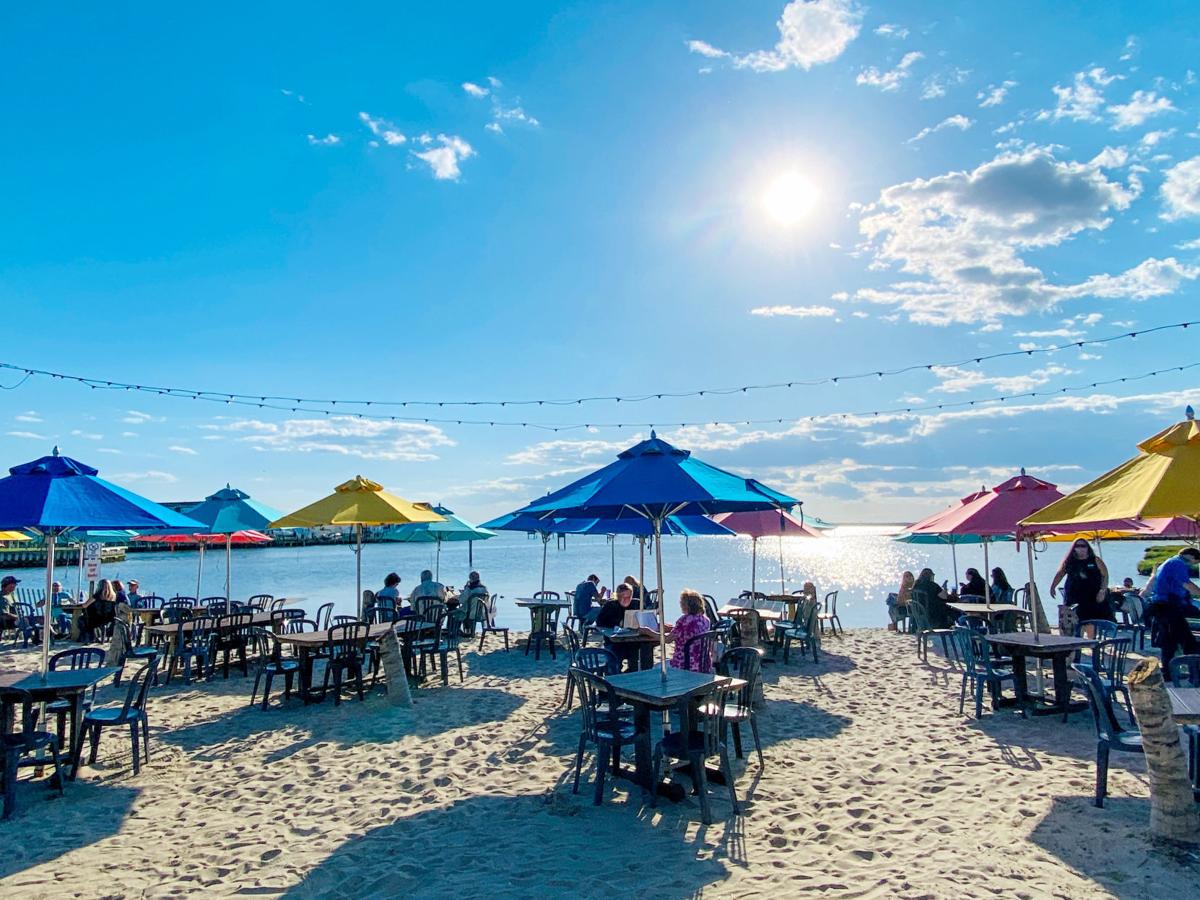 Macky’s, located on Ocean City’s bayside, has a private beach with tables in the sand, just feet from the water. 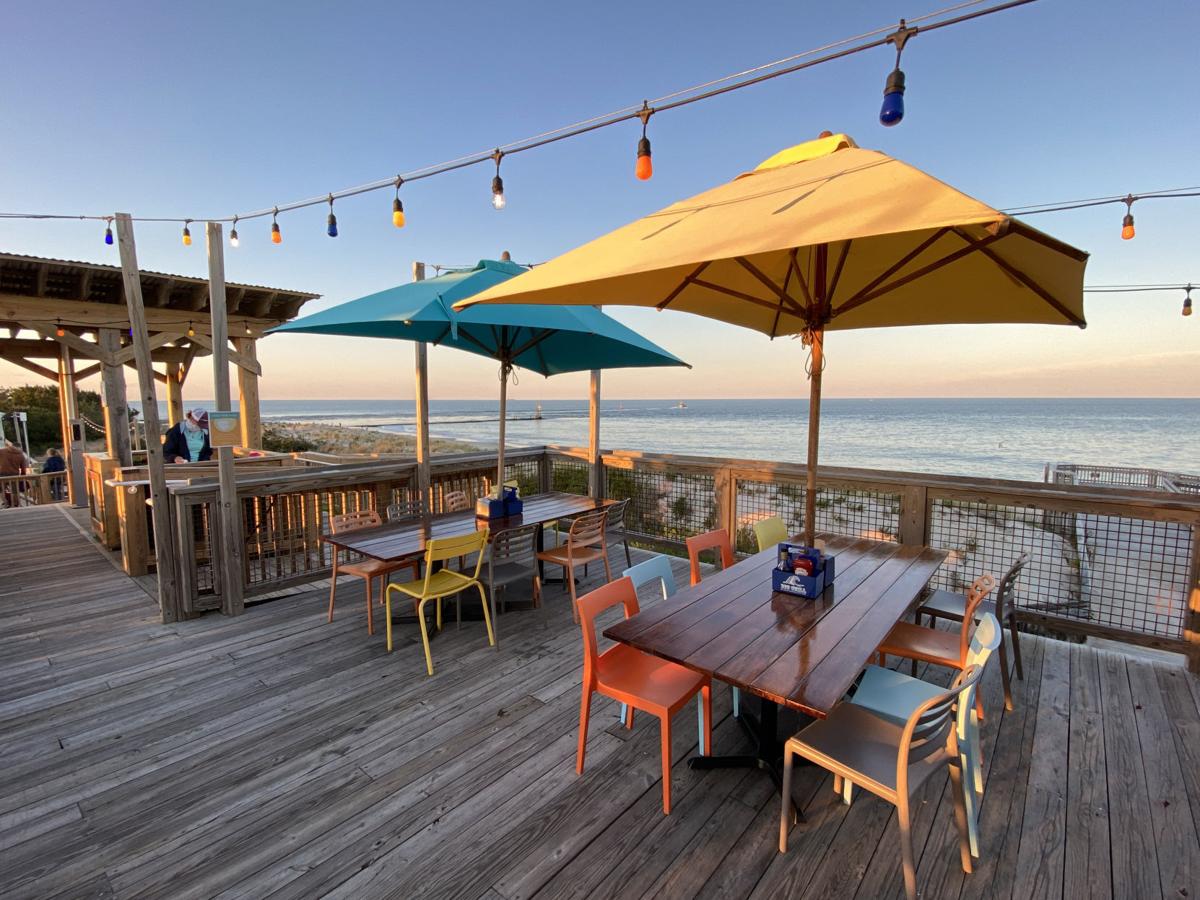 The Big Chill Beach Club, located in Delaware Seashore State Park, has gorgeous views of the Atlantic Ocean from its rooftop bar and patio. 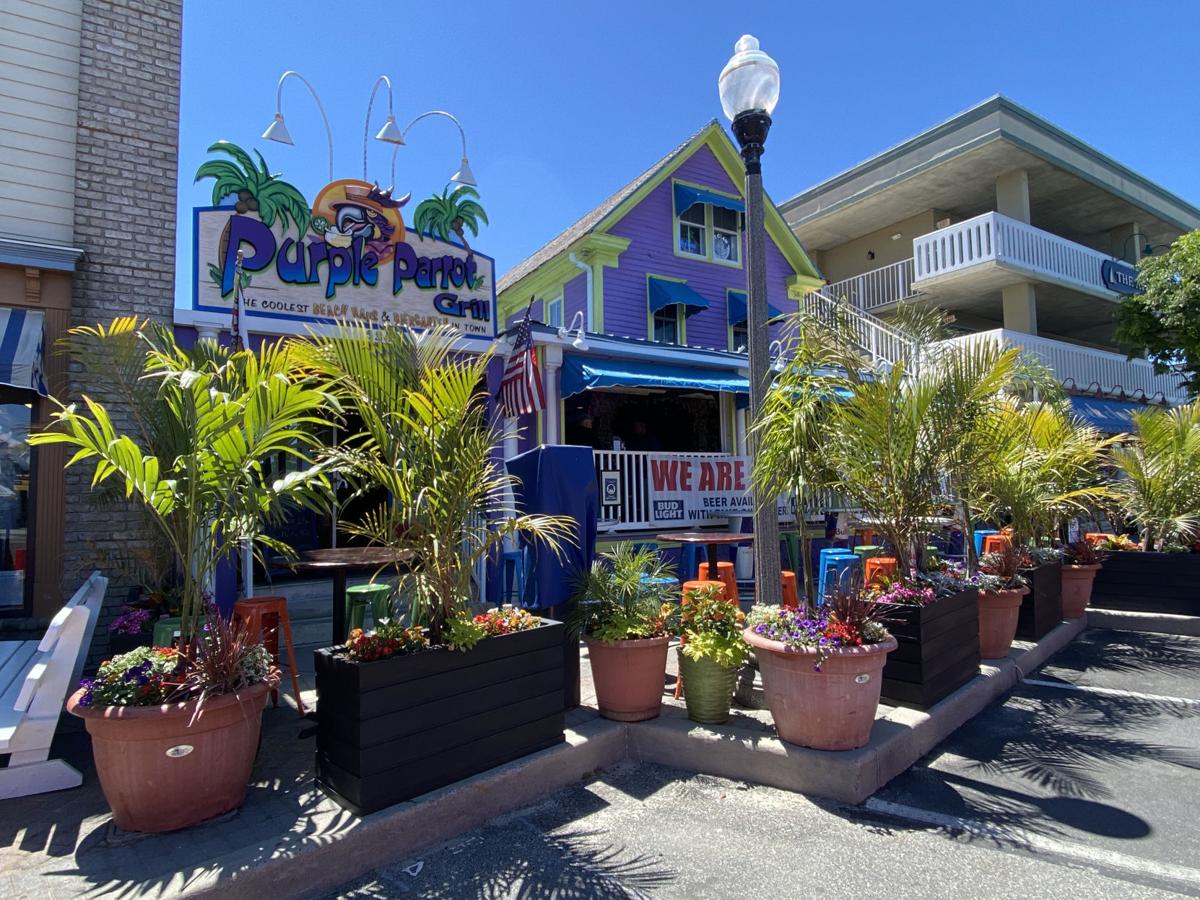 Dozens of businesses in Rehoboth Beach, Del., including the Purple Parrot, have received permission to extend patio seating onto sidewalks this summer. 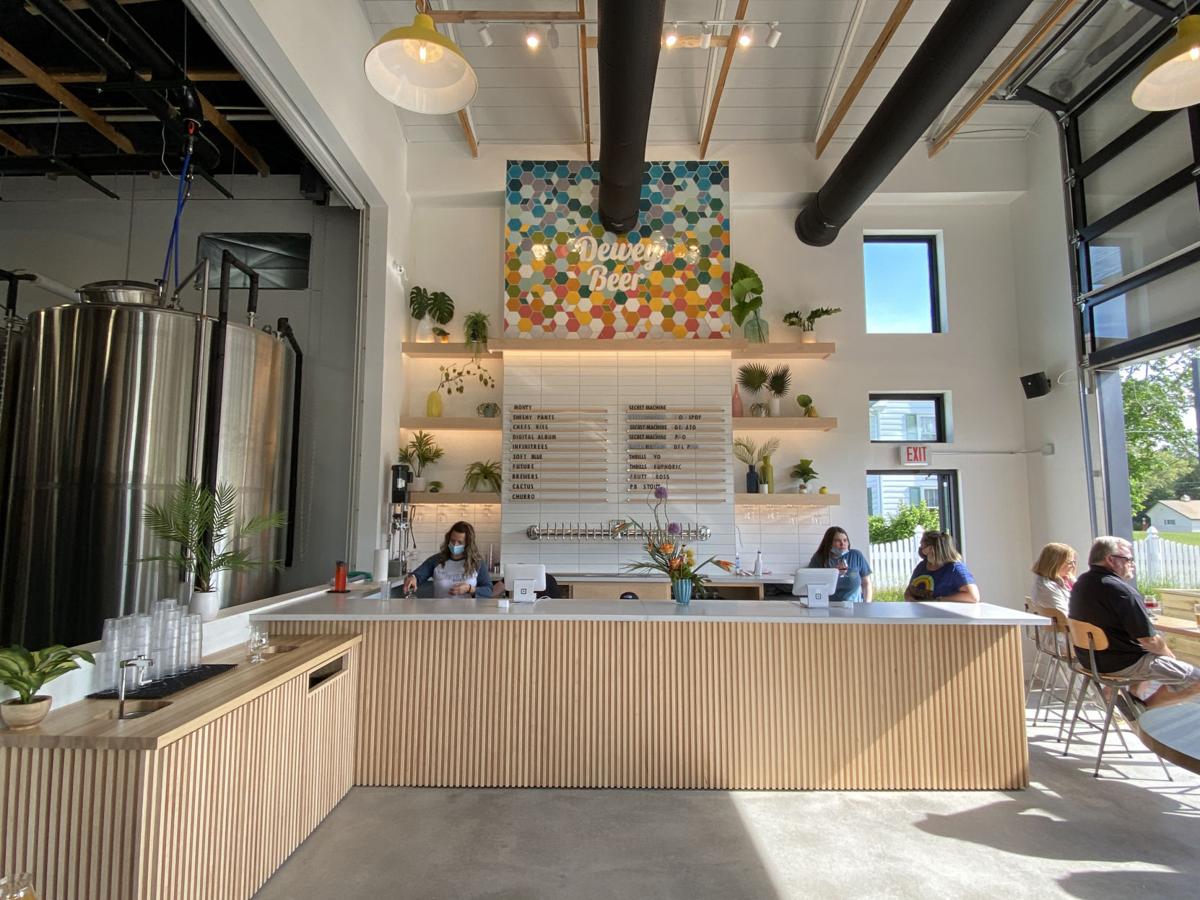 Dewey Beer Co. opened a new brewery and taproom in Harbeson, Del., less than 15 miles from Dewey, in May.

Macky’s, located on Ocean City’s bayside, has a private beach with tables in the sand, just feet from the water.

The Big Chill Beach Club, located in Delaware Seashore State Park, has gorgeous views of the Atlantic Ocean from its rooftop bar and patio.

Dozens of businesses in Rehoboth Beach, Del., including the Purple Parrot, have received permission to extend patio seating onto sidewalks this summer.

Dewey Beer Co. opened a new brewery and taproom in Harbeson, Del., less than 15 miles from Dewey, in May.

Last summer was a difficult one at Delaware and Maryland beaches, as a combination of stay-at-home orders, social distancing requirements and occupancy limits hammered businesses that rely on tourism. But with coronavirus case numbers dropping, this year looks to be as busy as ever, even as restaurants and other businesses face a shortage of workers. If you skipped the beach last year and are planning to head back this weekend, or any time soon, here’s a brief refresher.

Ocean City lifted outdoor mask mandates in late April — “people have regained their freedom to legally breathe maskless fresh air outside” was how Ocean City Today announced the news — followed by indoors restrictions in May. Rehoboth Beach, Delaware, waited until May 21 to end outdoor mask requirements in crowded areas, including the boardwalk, making it the last of the Delaware beach towns to do so. The same day, Delaware removed its indoor mask mandate, though visitors who aren’t fully vaccinated are advised to continue to wear masks indoors.

Businesses in both states are allowed to set their own policies about mask usage, so even if you’re fully vaccinated, it’s worth carrying a mask when you’re heading out to dinner, just in case.

Walking around Rehoboth’s main drags, you’ll notice bright red barriers have sprung up in front of downtown restaurants and bars, expanding outdoor seating and turning parking spaces into pedestrian walkways. Dozens of restaurants on Rehoboth Avenue and side streets are participating, including such landmarks as the Purple Parrot and Claws. Other businesses are getting creative with their space: The Greene Turtle, which sits on the boardwalk above Playland, has turned its Wilmington Avenue parking lot into a tiki bar with potted palms and rows of picnic tables.

In Dewey, the parking lots of the Starboard and Dewey Beer Co. are full of picnic tables instead of cars, allowing customers to soak up some sun along with their drinks. The extra space is “one of those silver linings we all hope comes from the past 15 months of the covid world,” says Starboard owner Steve “Monty” Montgomery. “Our local government has realized just how nice it is for so many businesses to expand into their parking lots, and how much customers appreciate it and enjoy being outdoors.” Montgomery says they’ll be keeping the parking lot tables through the end of the year, and hopefully beyond.

For decades, Rehoboth has billed itself as “The Nation’s Summer Capital,” because of the number of Washingtonians vacationing there. But that nickname became a reality after the election of President Joe Biden, who owns a summer house in North Shores, just north of downtown. Biden has long been a familiar face in Rehoboth: Both Joe and Jill Biden have hosted book-signing events at the sprawling Browseabout Books, which sells Biden action figures and socks featuring the first dogs as well as books by and about the first couple.

Double Dippers, the decades-old ice cream shop on Baltimore Avenue, offers “The 46 Special,” named after Joe Biden’s favorite order: chocolate chip ice cream in a waffle cone. You might not see the Bidens dropping into Lori’s Oy Vey Cafe for lunch, where their favorite sandwiches are on the menu as “The Bidens,” or visiting DiFebo’s for traditional pasta with red sauce, but the town is bracing for a season of visitors who want to see why the town is a favorite of the Biden family.

Ocean City is trying to lure families back with free outdoor activities for all ages, including movies on the beach on Mondays, Wednesdays and Fridays (locations vary); family beach games, such as sandcastle-building contests and relay races, on Tuesdays and Thursdays; Sundaes in the Park, with live music, children’s’ games, and ice cream (for purchase) on Sunday evenings; and, in lieu of weekly fireworks, a drone show with drones flying in formation, set to music, on Thursday and Sunday nights.

Most fireworks displays were canceled last year because of concerns about crowding, but Ocean City, Rehoboth, Lewes, Delaware, and Bethany, Delaware, have all announced that they’re hosting July Fourth celebrations. Additionally, most free outdoor events are returning to the Delaware beaches: Rehoboth is resuming concerts at the boardwalk bandstand on Friday, Saturdays and Sundays, beginning June 11. Bethany’s boardwalk concert series is slimmed down to Thursdays only, starting June 10, but there are outdoor movies on the beach every Monday, beginning June 7.

Popular breweries have expanded, indoors and out.

Dewey Beer Co. has become one of the hottest breweries in the region, thanks to its strong IPAs and double IPAs, laced with tropical aromas, and its popular smoothie-like fruited sour ales, released under the Secret Machine and Thrills labels. In early May, the brewery finally unveiled its new production facility and tasting room in Harbeson, Delaware, located just off Route 9 between Georgetown and Lewes. It’s airy and stylish, with a huge front patio and, more importantly, 20 beers on tap, with fridges full of four-packs to go.

In Maryland, Salisbury’s Evolution Craft Brewing took the opportunity to greatly expand its outdoor seating, turning a portion of the parking lot into a spacious yard filled with Adirondack chairs, shaded picnic tables and firepits. And if your travels take you through Cambridge, note that Poplar Street is partially closed downtown from Friday to Sunday, allowing restaurants and businesses to put tables out in the street, including RAR Brewing, which also opened a new dining room, RAR Eats, adjacent to the brewery in early 2020.

Take a day trip to Berlin.

If you need to take a break from the sun and sand, head to Berlin, the small Maryland town outside of Ocean City where the historic downtown is increasingly filled with cool restaurants and shops. There are still some extensive antique malls, full of dinnerware and baseball cards and vintage Coca-Cola glasses to browse, but you will find yourself lingering elsewhere. Viking Tree Trading Co. captures any outdoorsy-hipster vibe, stocking oyster knives, foraging kits, weathered leather messenger bags and new and used vinyl. Down the street, the Bruder Hill boutique serves as a softer counterpoint, with housewares, candles, handbags and work by local artists. World of Toys stocks educational games, wooden European toys and a wide variety of Lego and Playmobil, as well as games and puzzles that will keep the kids entertained at the beach house.

Grab a bite at Blacksmith, a cozy gastropub with burgers and crab cakes, or have drinks at the new Tiki Tim’s, a casual tiki-themed bar that just opened on a patio behind the Globe, where specials include rum drinks, smoothie-style sour beers from the nearby Burley Oak brewing, and giant sheetpans of nachos topped with fresh-from-the-smoker barbecue.

There’s plenty of movement on the restaurant scene: Lewes’ Harvest Tide Steakhouse, which has announced its opening a location in Washington, D.C., across from Eastern Market, is working on a location in Bethany Beach. Matt’s Fish Camp, which has locations in Bethany and Lewes, is replacing Ropewalk in Fenwick Island. Ocean City’s B.J.’s on the Water, known for its daily duck feedings, closed in January after 41 years in business.

But two of my favorite views are still around. The Big Chill Beach Club, which opened in Delaware Seashore State Park in 2017, has the best views of any bar at the Delaware beaches. Look east from the colorful, umbrella shaded tables on the rooftop, and all you see are dunes, a thin strip of sand, and waves stretching off to the horizon. Turn around, and you can catch sunset over the Indian River Inlet and its namesake bridge. The menu is simple beach food, such as tacos and shrimp wraps, washed down with a variety of margaritas and crushes.

Everyone has a favorite outdoor spot in Ocean City, but for me, there’s something great about sitting at one of the tables at Macky’s Bayside with your feet in the sand, eating steamed shrimp caked in Old Bay and drinking frozen rum cocktails or a classic orange crush, waiting for the sun to begin to set toward the end of happy hour. Seats are just feet from the water, making the private cove feel even more beachy than the boardwalk bars that actually face the beach.

Workshop: Making a Living as an Artist with Yemi

Workshop: Making a Living as an Artist with Yemi