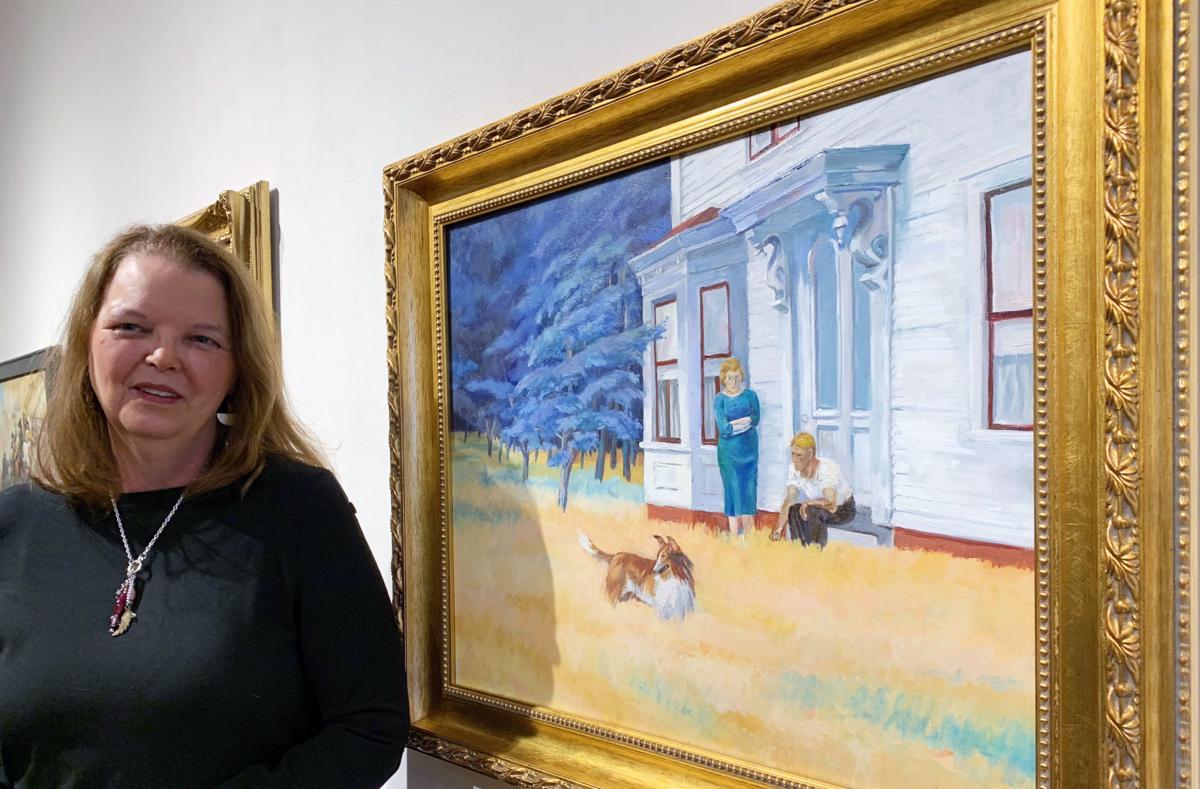 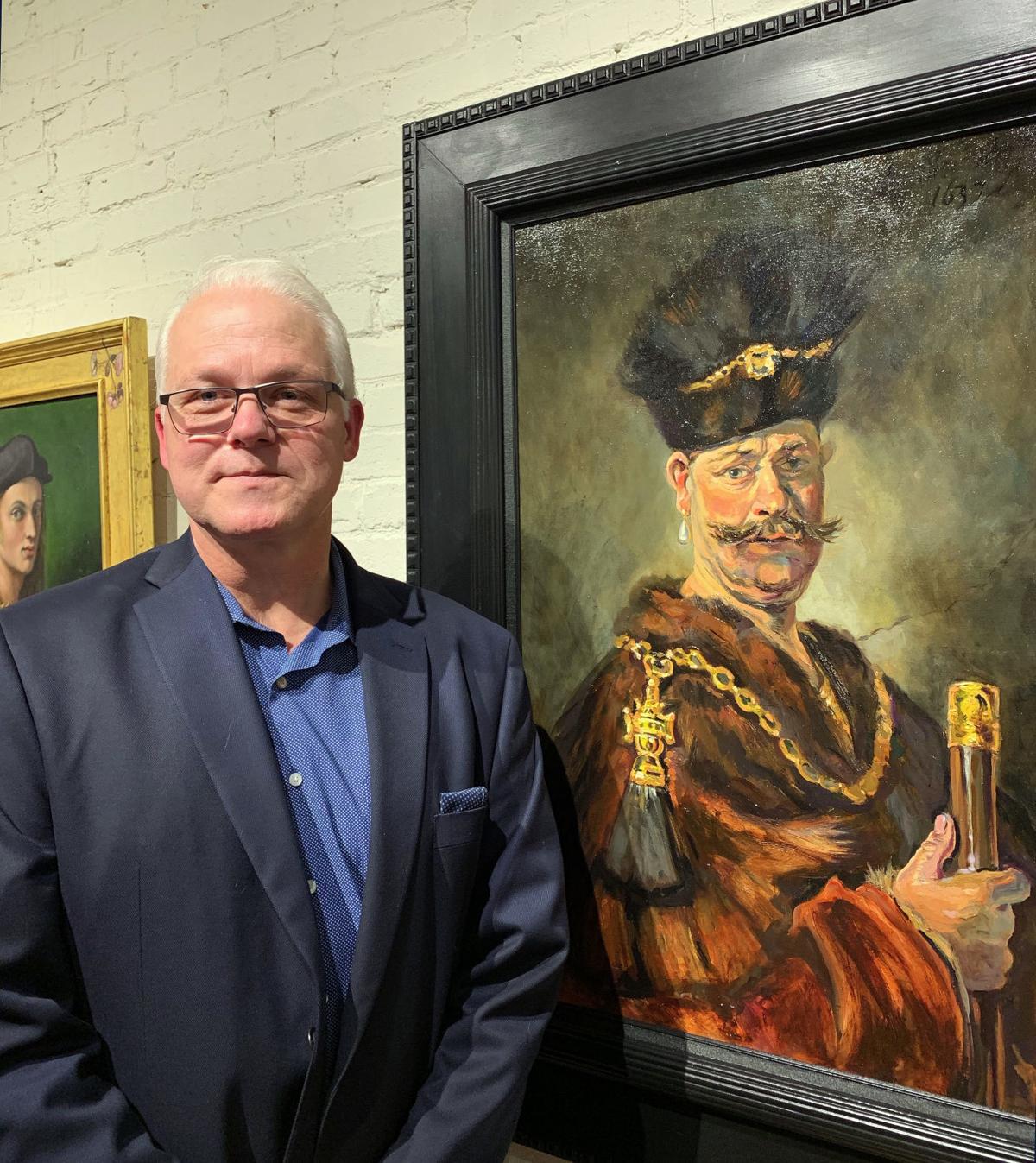 Long in awe of Rembrandt, Christopher Madden closely studied layering, color use, and texture while copying “A Polish Nobleman.” 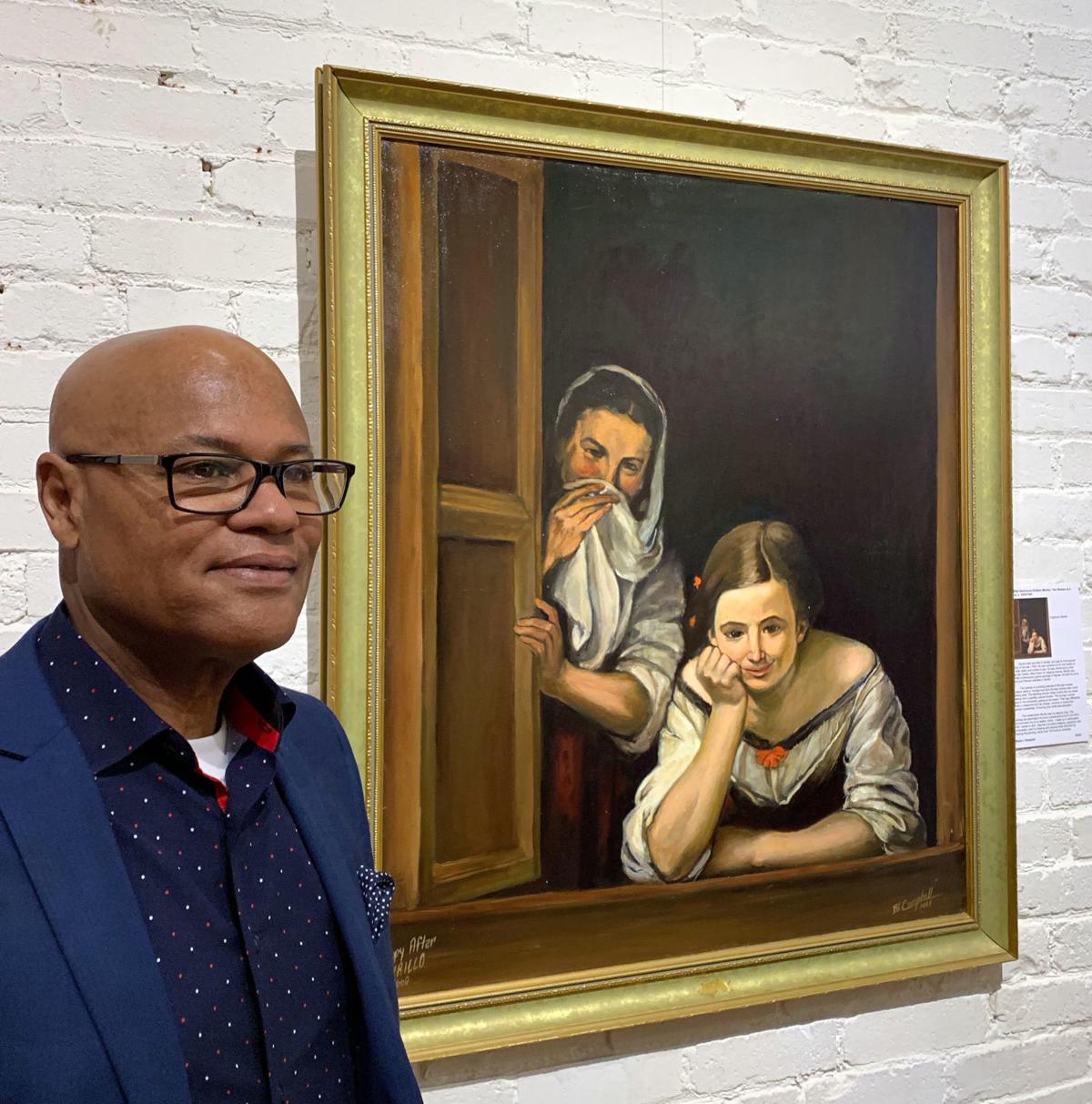 Bruce Campbell has been fascinated by Murillo’s genre painting “Two Women at the Window” ever since a boyhood trip to The National Gallery of Art.

Long in awe of Rembrandt, Christopher Madden closely studied layering, color use, and texture while copying “A Polish Nobleman.”

Bruce Campbell has been fascinated by Murillo’s genre painting “Two Women at the Window” ever since a boyhood trip to The National Gallery of Art.

A trio of painters engaged in a lively panel discussion last Saturday at the Delaplaine Arts Center. Their show, “The Art of Copying,” runs through March 1.

The panelists agreed that copying classic paintings at the National Gallery of Art in Washington D.C. is an ideal way to pick up skills and insights and to hone their powers of observation. They also believe that the practice influences and improves their original work. That’s how the old masters learned. Later on, painters like Pablo Picasso and Salvador Dali spent time as copyists at the Louvre.

“It’s beyond an honor,” said Silver Spring artist, Bruce Campbell, who has been a master copyist at the National Gallery since 1995.

“It’s an awesome opportunity to work in that shrine to art,” he said.

The recently retired chief engraver for the Treasury also remarked that guards are always on the lookout for visitors who get too close to the art. While copyists can’t touch the paintings, they can stand next to a Rembrandt while holding a “fully-loaded paintbrush.”

Gillian Collins is an associate member of TAG/The Artists Gallery where her usual subjects are mechanical items. A color enthusiast, she concentrates on more modern artists — often the Impressionists — when working at the National Gallery.

Collins compares the process of becoming a copyist to a college application on steroids. To apply for one of the coveted yearlong permits, the artist must provide two personal references, two professional references, samples of their work and an essay. There is also a personal interview and a background check. You can’t be too careful when artists are wielding the aforementioned loaded paintbrushes.

The happy few who are chosen have time limitations. They may work from 10 a.m. to 4 p.m. one day a week, Monday through Friday. When Campbell was working full-time, he was able to go in once a week because he often took Fridays off. Sometimes he was able to schedule an extended lunch break in order to get in a few hours of painting at the museum.

Master copyists should be comfortable interacting with the public. If you must be free of distractions to paint, the National Gallery is not the right place for you.

Campbell recalls a day that a guard called him an ambassador. That’s when he learned that he had carried on a conversation with a group of foreign diplomats without knowing who they were.

Madden compares the museum to a showroom full of cars and he says it’s natural for visitors to want the copyists to share their secrets about “what’s under the hood.”

Some are surprised that the artists aren’t necessarily trying to create exact copies of the masterworks. A painting might only show a small detail of the original. Other changes are even more dramatic. Collins altered the background of a Degas and changed the color of the dancers’ tutus. Madden added a distant McDonalds restaurant to the painting he is currently working on.

Even if a faithful reproduction is attempted, there are limits. Over the years, varnish yellows the painting and the copyist must guess the artist’s intent. Collins says that when visitors tell her that they like her painting more than the original, she reminds them that pigments fade.

Other shows in February

Mixed-media artist, Mary Scire, brings her show, "Bits and Pieces," to the gallery through Feb. 23.

Juror Sonya Evanisko of Shepherd University chose work in a variety of media and styles for "Night and Day: A Study of Contrast." Local artists including Shannon Beatty, Colleen Clapp, Mary Noel, Jane Pettit, Sunil Sukla, and I are represented, along with those from farther afield. I especially enjoyed Wisconsin painter Michael Santini's medieval-inspired "The Seed Sowers." The show runs through March 1 with a reception from 5 to 7 p.m. Saturday.

Featured artist Jill Hessler presents "Skyscapes." The show will be on display from 11 a.m. to 6 p.m. on Saturdays and Sundays this month. Check out art by other members in the rear of the gallery.

Joseph Norman's show "Dancing in Picasso's Shadow: Ghetto to Guernica" features lithographs and wall-size drawings that explore the Middle Passage. The artist will create a live drawing depicting the Zong massacre tonight from 5 to 7 p.m. in the Hodson Gallery.

The gallery's partners explore contrasts in this month's show, "Fire and Ice." The title refers to both technique and subject matter. Virginia Sperry's large welded kangaroo sculpture represents the fire part of the equation while Harriet Wise's snowy landscapes bring to mind icier aspects. You can meet the artists at their talk from 7 to 8:30 p.m. Feb. 20.

The Frederick County Art Association will meet on Feb. 10. A business meeting will begin at 6:30 p.m., followed by Becky Carpenter's talk at 7. She'll demonstrate various methods of image transfer onto 2D and 3D surfaces. The event is free for members and $5 for nonmembers. Visit fcaamd.org for more information.

Nice. I plan to see that exhibit.