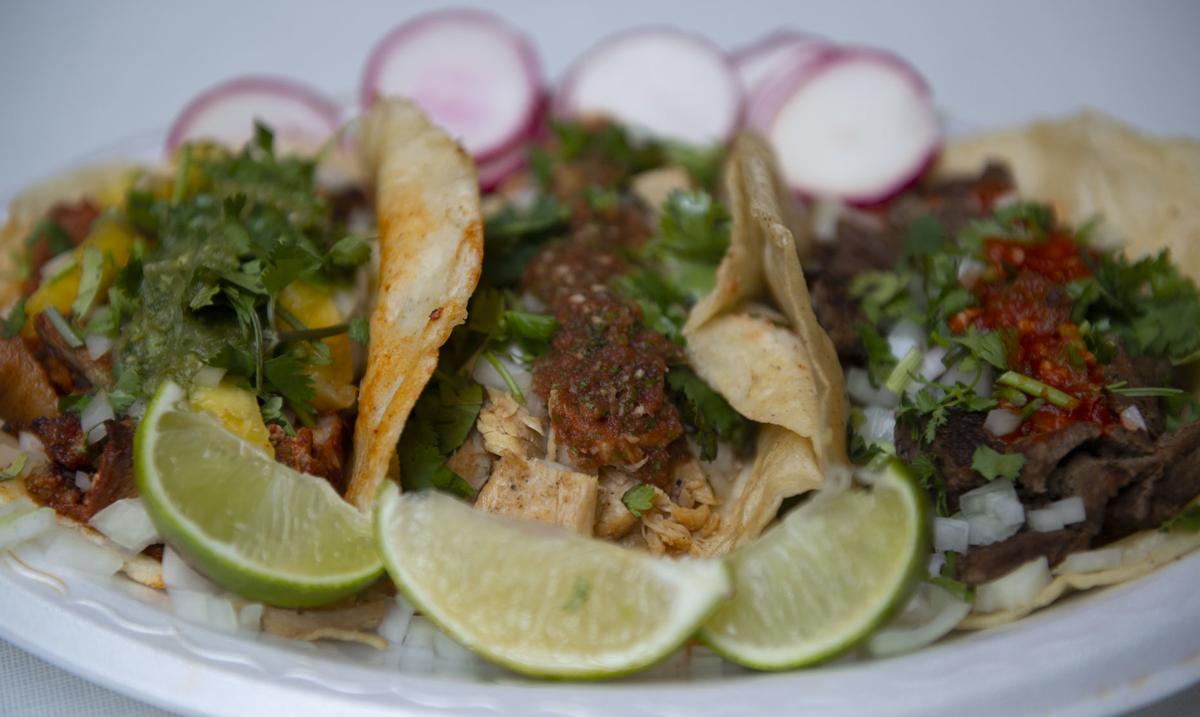 A trio of tacos from Tacos Carlitos, which recently opened in the Francis Scott Key Mall. 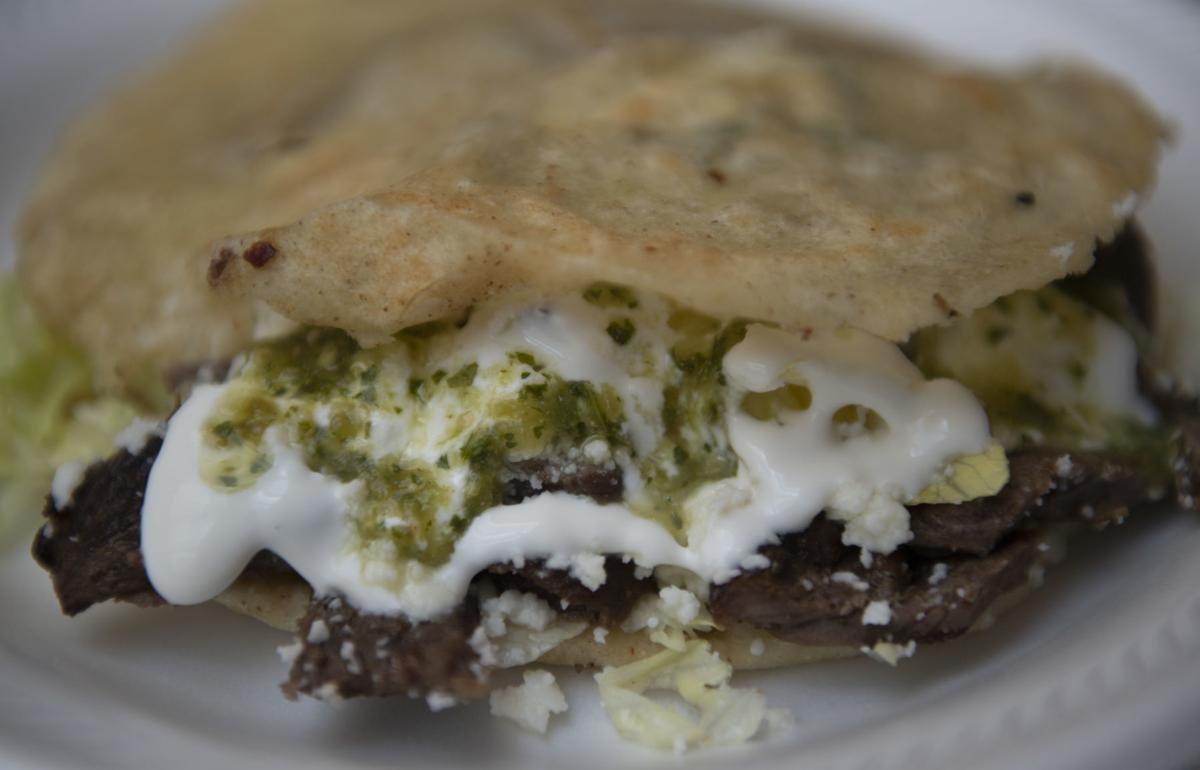 A gordita from Tacos Carlitos, which recently opened in the Francis Scott Key Mall. 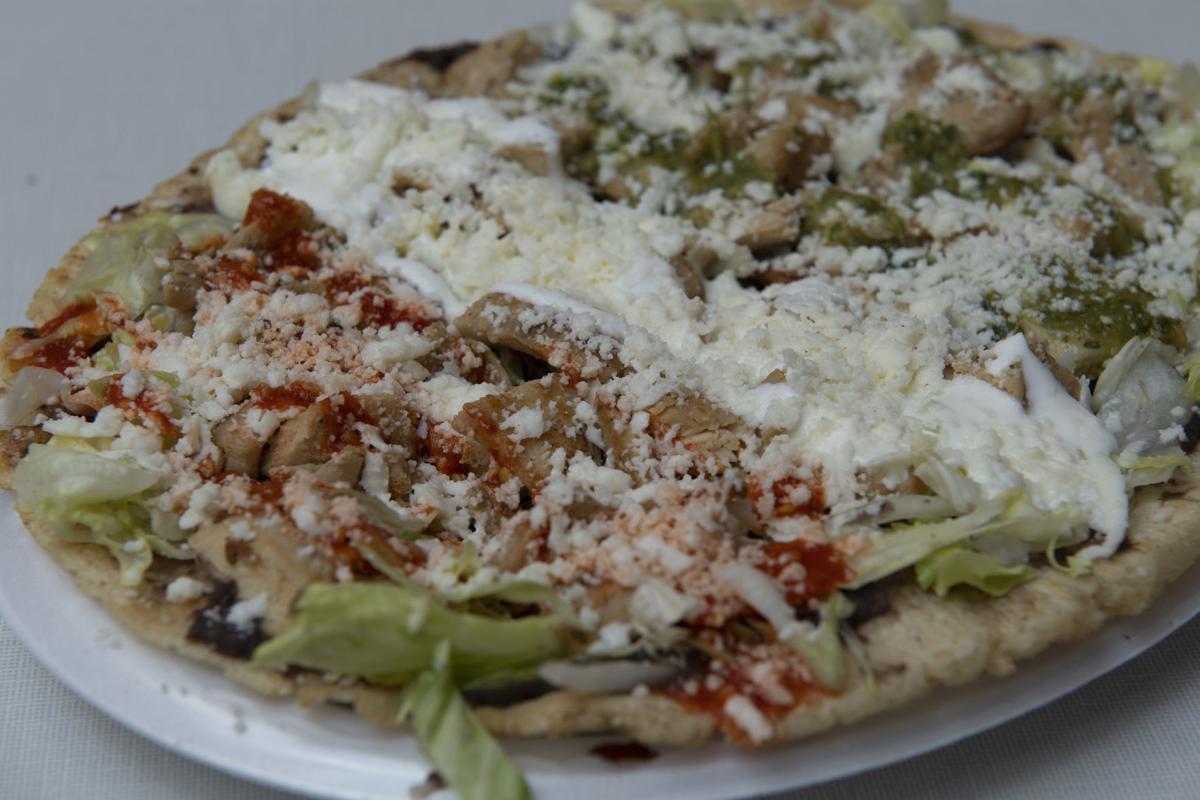 A huaraches from Tacos Carlitos, which recently opened in the Francis Scott Key Mall.

A trio of tacos from Tacos Carlitos, which recently opened in the Francis Scott Key Mall.

A gordita from Tacos Carlitos, which recently opened in the Francis Scott Key Mall.

A huaraches from Tacos Carlitos, which recently opened in the Francis Scott Key Mall.

If heaven is a place on earth, my nirvana is being stuffed with good Mexican food for five days straight.

And not just your typical Tex-Mex cantina fare. Armando Mendez, the general manager of the recently opened Tacos Carlitos in Frederick, was quick to emphasize that the mom-and-pop stand proudly represents the cuisine of Puebla, a capital and state about three hours southeast of Mexico City. That heritage is behind one of the signature dishes on the menu, tacos arabes de puebla, a wheat flour tortilla wrapped around marinated pork in a smoky chipotle sauce.

It’s easy to miss under more than a dozen other tacos on the menu. And it’s different, especially if your metric is based on smaller corn tortillas. The dish, reportedly a merger between Mexican and Lebanese cuisines, takes morsels of chewy pork and marinates them in a spice blend heavy with thyme and garlic. The meat is served solo in a rich, dark sauce, smoky and complex thanks to a base of chipotle pepper and tomato. The 8-inch wrap, garnished with a wedge of lime, takes about two seconds to eat, but it makes a perfect mid-afternoon snack.

I ordered the specialty under the guidance of Armando, whose parents — Margarita and Armando, Sr. — started the first Tacos Carlitos four years ago in Hagerstown. The couple worked in New York restaurants for years, Armando said, before moving to the area to be closer to family. When it felt right to open a restaurant of their own, they selected lower-stakes real estate at the Hagerstown Premium Outlets, just a few feet from the Adidas store. The venture went so well, they opened another location at the Valley Mall. That location prospered, too, and they opened a third stand in Frederick at the end of July.

“The demand for Mexican food was there and that’s what brought us in the beginning,” said Mendez, whose vendetta against poorly Americanized Mexican food felt like a crusade close to my own heart. “It’s hard to find authentic restaurants. Everything is Tex-Mex. It’s all lies.”

And yes, Tacos Carlitos serves things like fajitas and overstuffed burritos, for sure.

But their real specialty, he added, was street food — the items you could order from a stand in Puebla.

“Number one is tacos,” he said. “Number two, tortas. Three is sopes, four is huaraches, and five is gorditas. These are the most in-demand because no one else does them.”

I’m not one to ignore a confident command. So, for all of last week, that’s what I ate. A trio of tacos stuffed with carnitas and chorizo. A fat torta milanesa, the beef filet pounded thin and fried to a crisp. Sopes topped with fragrant al pastor. I weeded through the lengthy menu to find the gems on offer, and they didn’t vary much from Mendez’s personal recommendations.

First, the tacos, which even won a nod of approval from one of my most persnickety coworkers (a guy with a deep personal loyalty to Taco Bar on West Patrick). There’s 15 different meats to choose from, but you can’t go wrong with the carnitas, a pile of braised pulled pork literally dripping with flavorful juices. The tender meat is best accentuated with a generous squirt of garlic-laced salsa verde, but the racy salsa roja is another strong companion if you can handle the spice.

In a small personal tragedy, Tacos Carlitos was out of lengua — tender beef tongue — every time I visited. But I subbed in carne asade and was no worse for the wear, especially given the cumin and citrus marinade lacing the well-cooked steak. Chunky chorizo was another good option, crisp from the griddle and balanced beautifully against the cilantro and chopped onions topping the trio of tacos.

That aforementioned griddle is the locus of the Tacos Carlitos kitchen, where you can find at least four employees searing proteins or slapping freshly shaped masa on the grill. Those employees, by the way, are unvaryingly lovely, accepting of my clumsy pronunciations and more than willing to respond to requests for extra napkins or utensils. The same man is almost always manning the register, and he and I got to know each other so well that we developed a bit of a shtick.

“Maybe you work here,” he joked after my second or third visit (ha!).

When I took my friend for lunch, the same man applied his employee discount to our order. It was so sweet, I almost cried. It also helped me justify the elotes locos I added to my order.

The Mexican corn-on-the-cob featured delightfully crisp kernels and a thick topping of mayonnaise and crumbly queso fresco. It was also puckeringly tart thanks to a hefty shake of Tajín seasoning. The chili-lime condiment can be an acquired taste for the uninitiated — the combination of sour and spicy takes some getting used to — but it’s a fundamental part of the street food staple.

Not everything on the menu can boast such strong flavors. I was a little disappointed by my torta, filled with a pounded beef cutlet under generous portions of avocado and cheese. The protein itself was fine, pounded thin and fried to a crisp with crunchy breadcrumbs, but the bread was unremarkable and the overall sandwich was a little bland.

Luckily, it’s a rare experience. Just stick to the camarones — garlicky little shrimp fairly popping with flavor — or the succulent al pastor, which pairs roasted pork with a strong, cumin-centric seasoning. I enjoyed both in the form of sopes — a dish of thick corn tortillas topped with meat, fresh salsa, and refried black beans. The toothsome tortillas play a central role on the plate, but they’re even more pivotal in the huaraches: impressively cumbersome 15-inch ovals towering with toppings and and accented by a drizzle of sour cream. I loved the almost custardy texture of the thickly formed masa, which held its own against a juicy pile of suadero (nicely tender braised and shredded beef).

As Mendez will tell you, Tacos Carlitos is NOT a Tex-Mex cantina. There’s no in-house seating and definitely no skull-sized margaritas to wash down dinner. But there’s something better in the form of aguas frescas, refreshing (and non-alcoholic) drinks that start with water and fruit. I’ll never turn down horchata, a rice milk drink redolent with fresh cinnamon and vanilla. But on a 90-degree day, it’s hard to beat a cold class of jamaica (pronounced like ha-MICA, not the Caribbean country). The hibiscus-based drink is colored a deep maroon and boasts the tangy flavor of dried plums. Sweet and tart and inimitably refreshing, it’s another strong offering from a menu full of them.

Where: 5500 Buckeystown Pike, Frederick (inside the Francis Scott Key Mall next to the J.C. Penney)

Service: Quick and minimal (orders are placed and picked up at the counter)

Took a look at this location today. A goodly number of people ordering, but the tables and chairs in the walk-around area are all high. Not good for us older folks.

So, I walked a few steps away to Rosa's pizzeria and ordered a calzone, with two containers of marinara sauce.

Mariarchi is good if you stick to the specials and to the Spanish section of the menu.

I don’t believe there can be “too many” Mexican restaurants, and whether or not there are would largely be determined by sales/business. I plan to try this restaurant as soon as I can, particularly after Cafe Bueno stopped selling lengua tacos. I hope whatever shortage exists of this excellent meat will be resolved before I arrive to try it.

how its this front page news

It's not, it's in the Arts and Entertainment section

I wish them well but question why they chose a dying mall for their location. Or do people still go to the mall?

It's pretty funny that you listed half of those places as they are straight garbage.

Cafe Bueno and Taco Bar are good - the rest of what you listed is like saying having a McDonalds means you don't need any more American fare.

Mi Rancho Grande is my personal favorite. Excellent food. Also can personally attest to the excellence of Cafe Bueno and Los Toltecos (also a Cleveland Browns bar for those who want to follow Baker!)

Trump promised us a taco truck on every corner. I can’t wait!