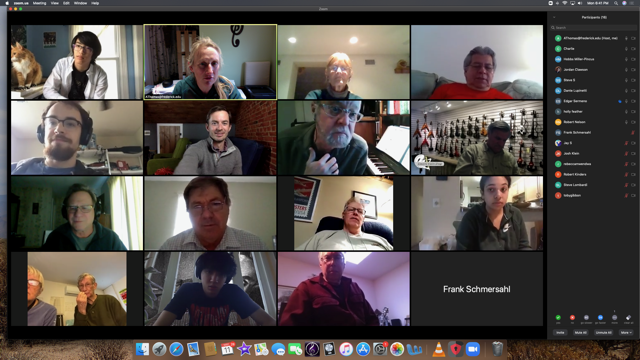 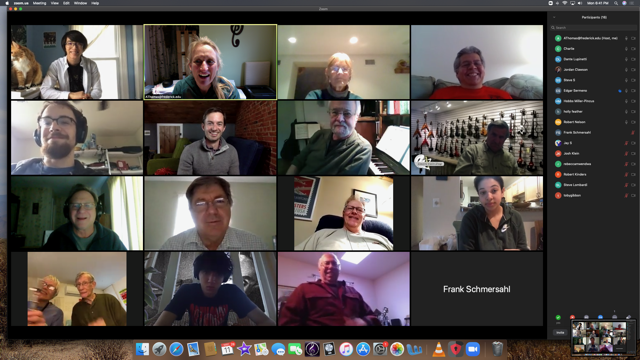 When Frederick Community College was forced to closed down in March because of COVID-19 quarantine orders, jazz ensemble instructor Anita Thomas did what she does best: she improvised.

Not only did that mean teaching regular courses online via Zoom, but also hosting a concert with her students on May 22.

Thomas recently answered some questions via email about going virtual.

Can you tell me about the Frederick Community College ensemble classes that you are offering through Zoom during this pandemic?

Thomas: On Monday nights during the Spring and Fall semesters FCC offers 2 jazz ensemble classes on campus. The class focuses on ‘small’ group improvised jazz. The instrumentation can be quite varied as we don’t use set arrangements. There used to be only one jazz class on Monday night but the ensemble grew so large and the knowledge and abilities were so varied we split the class into an intro/beginner/intermediate class and now there is also an advanced class that is directed by Jordan Clawson. There’s also a wonderful big band that rehearses on Wednesday nights directed by Howard Burns. This is more arranged and for set instrumentation.

When FCC closed as a result of the pandemic at first we thought it might just be temporary so I set up a Zoom account and met with my students online. We discussed our songs and techniques for playing jazz and working on the songs. It soon became apparent that we would see out the semester online so I did what a jazz musician does best — I improvised. We were not going to be able to perform a concert in the JBK Theater at FCC but I really wanted the students to work towards a similar goal. Instead we found ourselves recording all our parts individually at home.

How did you transition your students to an online platform and what was the transition like?

Thomas: I got set up with a free Zoom account. We never missed a class. We met at the same time we normally would — 7.30 to 9.30 p.m. Monday nights. I’m sure most people are now familiar with Zoom and Skype and other video conference call platforms. Before the pandemic I had never used Zoom. In fact I had no idea it existed. A friend helped me get set up and oriented with Zoom and then I was able to advise the students. It was mostly as easy as clicking on a link in an email to join the class online. In this process unfortunately we lost a couple of non credit students that were unable to get decent internet at home or were struggling with the technology. Out of 17 people enrolled in the class we would typically have 12 to 13 on the Zoom meeting. There were some early teething problems but after a few weeks we seemed comfortable with the platform. It’s certainly not the ideal way to run a musical ensemble but under the circumstances we did the best we could.

Can you tell me about the concert you put together for May 22 with your students’ recorded tracks?

Thomas: Once it was apparent we would not be having a final concert I chose to make the rest of the semester a recording project. All the students needed was two devices. One would need to be able to play a backing track through headphones and the other device would need to be able to record them playing along. It could be a smart phone and a computer, or tablet and a laptop, or two phones. It didn’t matter. The students just needed to be able to play along AND record themselves and then send me the digital file. At home I recorded a version of each of our eight songs that we’d learned so far. I recorded all the instruments using a program called Logic Pro X. I was then able to send the students the complete tracks so they knew the form of the song ie. 4 bar intro, melody, solos x 4, melody and ending. I then also sent them the track minus their part. They were then able to play along and record themselves. Once they sent me the files I pieced them together and effectively removed all or most my parts so the final track was all the students playing together.

We decided to have an online concert on Friday May 22nd via Zoom. The students were able to send the Zoom invitation link to their family and friends. The semester had already ended on May 15th but I really wanted to present all the recordings on one night and have some kind of final ‘concert.’ Most of the students had only heard the tracks they were involved in. The students had picked three songs each to work on but because of some instrument needs some played on more. I was the only person that had heard ALL of the tracks up until concert night. I also asked the students to send me photos of themselves with their instruments so I could put up their picture when they were taking a solo. Although we had eight different songs some had been very popular so a few were presented twice with different instrumentation which meant we had 11 tracks in all. It was so wonderful to see fellow FCC music faculty watching and also many family and friends and students from other FCC musical ensembles. There was so much support for all the wonderful performances. Lots of clapping and cheering after each song and congratulations in the ‘chat’ section. There were about 45 to 55 people all up on the call including a family of four watching together. We even had a couple dancing. The online concert was a huge success and it made me proud as the students had worked so hard to make this semester successful despite the situation.

What has been the biggest challenge in conducting these classes online as opposed to in person?

Thomas: Playing music together in real time makes it much easier to solidify musical concepts through the act of doing. Putting these things into words at times created confusion. Musical concepts and explanations that during a normal a face to face classroom meeting would be covered and dealt with easily often became labored discussions.

Ensemble playing is a communal event. Each player offers musical support to their fellow player. As ensemble musicians we learn to take and give visual cues. Without being able to be physically in the same space it is very difficult to achieve the same result. Another aspect is the excitement and anticipation of a concert. The stage is lit and the count off begins. There’s an element of great team work in that moment to give a great performance.

I can’t tell you how proud I am of all of the students. When they signed up for the class their expectation was to learn and rehearse and put together a concert playing with each other. Through the pandemic they were thrust into learning new technologies and figuring out home recording and playing along to backing tracks. Some folks had never recorded themselves before. Even for professionals this can be both difficult and confronting. We are often our worst critics and to hear ourselves out of context can be very harsh. Some students admitted that it had been quite revelatory and it had helped them improve certain aspects of their playing.

Do you think you will continue using more online platforms even after quarantine is over? If so, what types of plans do you have?

Thomas: For me personally I had no idea how much extra work I had committed to. I really did not know much about the recording program I was using and as a result it took me many many hours of tutorials and learning by trial and error. While I’m grateful to have learned some new skills nothing compares to working face to face with other musicians. I thrive in the moment of classroom teaching and the unexpected questions that might arise out of the students trying something for the first time. In the classroom I feel I can give more individual guidance and support but online I felt compelled to give more of a lecture as it was impossible to play together because of the internet latency/lag. There were some real positives though that came out of the recording process for the students and while I wouldn’t want to prepare and then mix eight songs in a short amount of time I would certainly consider having a recording component in future semesters. This would mostly involve sending files via emails, google drive or dropbox. It’s possible we might have to meet again as an online class. I feel more prepared now but I think I would change things up. I would have some different tasks and assignments that are to do with theory and harmony and maybe some compositional/arranging elements and maybe fewer songs to record.