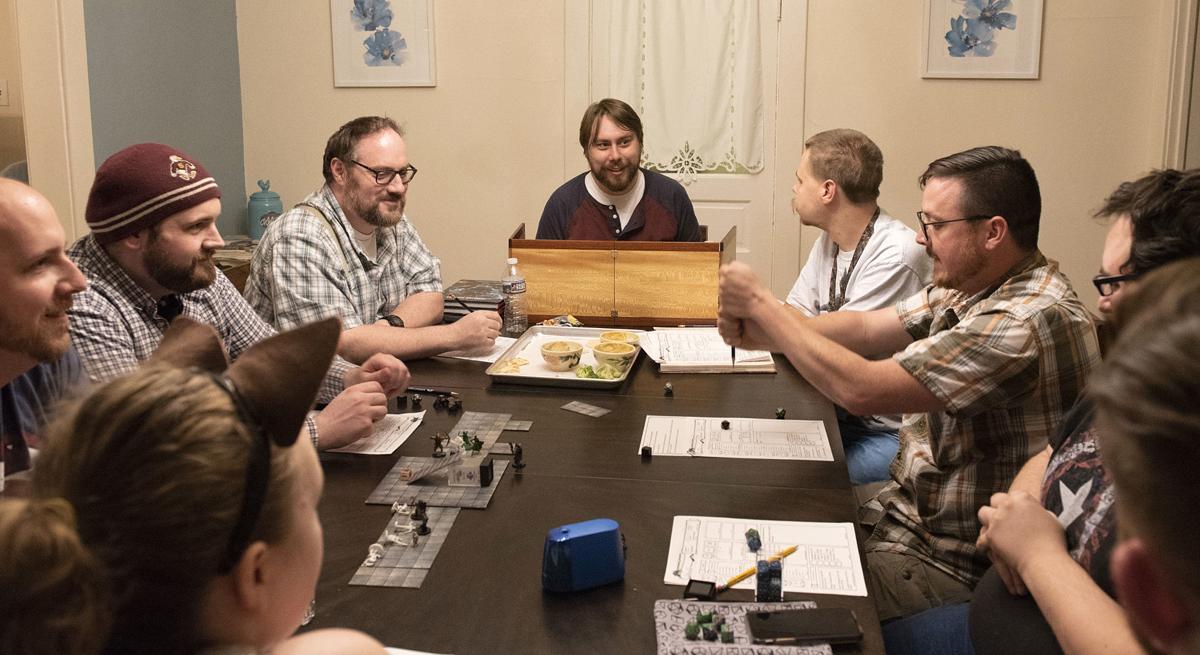 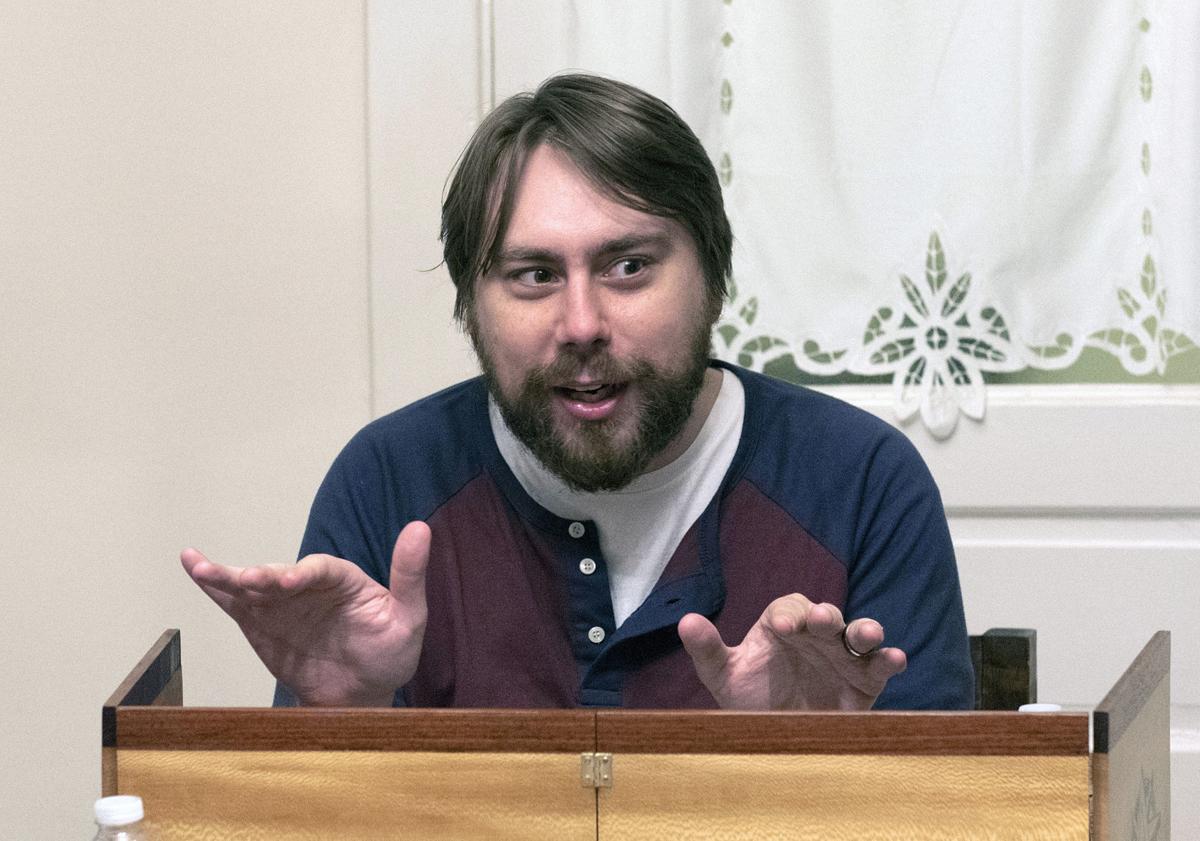 Wayne Danier lead the game in the downtown apartment. 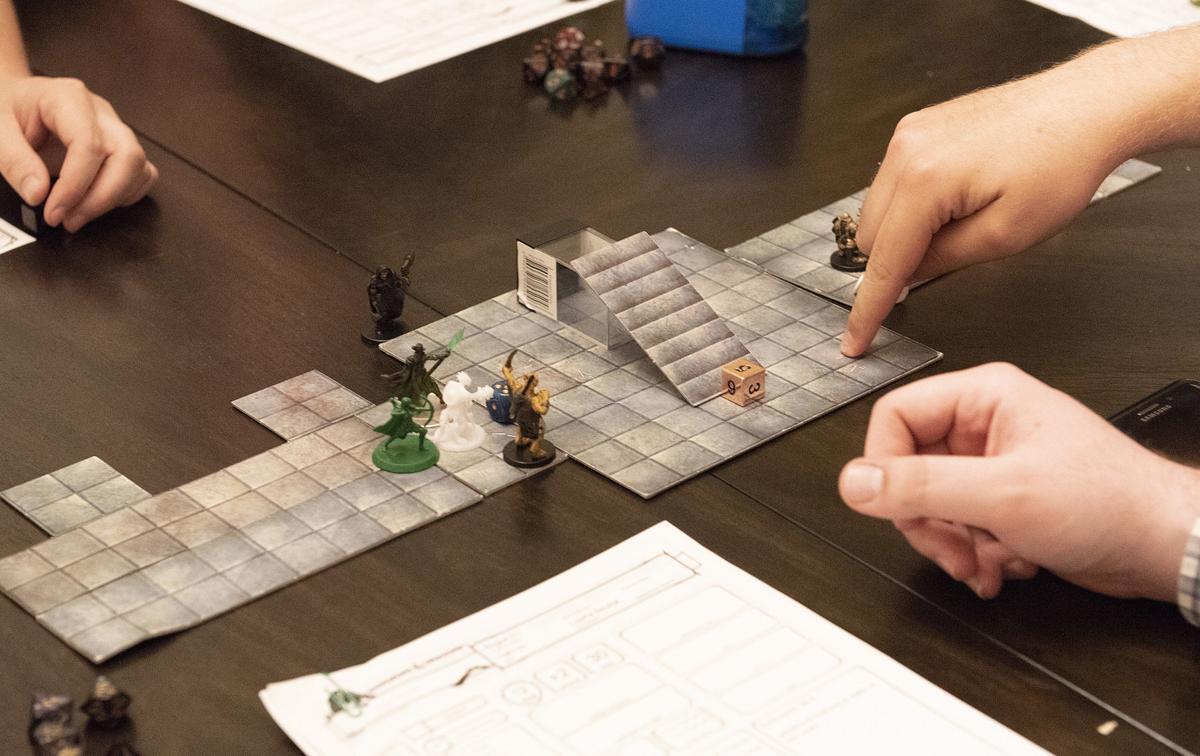 A small board with figures is red in the Dungeons and Dragons game. 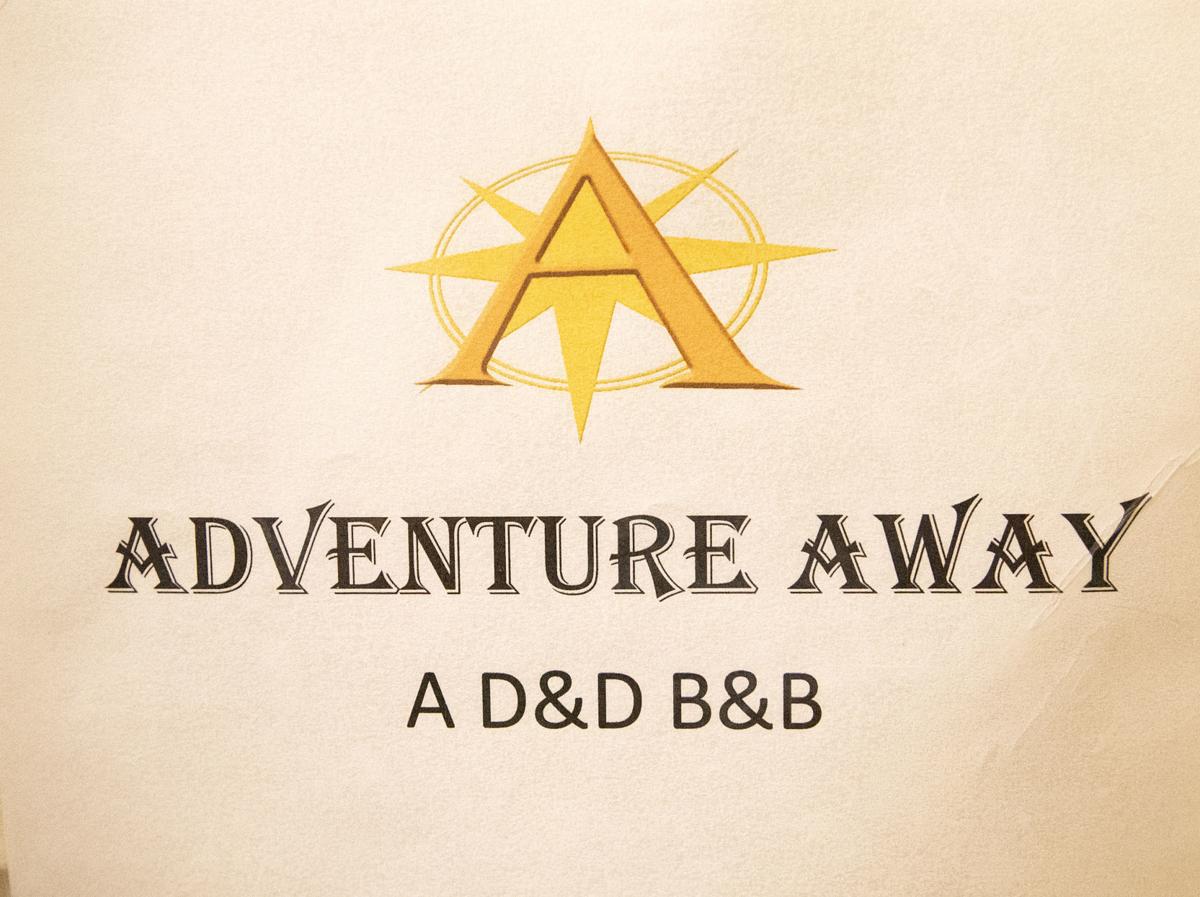 A sign on the second floor apartment door where the Dungeons and Dragons game was played.

Wayne Danier lead the game in the downtown apartment.

A small board with figures is red in the Dungeons and Dragons game.

A sign on the second floor apartment door where the Dungeons and Dragons game was played.

Apple Reese and Wayne Denier have been to a lot of bed-and-breakfasts over the course of their eight-year relationship. There was one in St. Michaels, a small seaside town in Talbot County, that was “nice,” Reese said, but a little boring.

More recently, the married couple went to stay at a bed-and-breakfast in Virginia wine country that offered an all-day tasting tour. In the morning, the hotel sent a paneled van and whisked guests from vineyard to vineyard, giving them the chance to taste wines and get to know one another.

“We had a nice time with all these people,” Reese said. “The only thing we kind of missed is, we wished we had a chance to do some gaming together. We wished we could have sat down and played some games.”

Reese doesn’t mean games like Pictionary or Scrabble. She and Denier were thinking specifically of Dungeons and Dragons, the fantasy tabletop role-playing game that first came out in 1974.

The couple played the game more often earlier in their relationship, but life got in the way — specifically, their 4-year-old son and hectic schedules as working adults. In turns out that it can be hard to schedule a round of Dungeons and Dragons — a game that works best with multiple players — when you and your friends have full-time jobs and children to occupy your time.

The concept finally manifested as Adventure Away, the first-in-the-world (or at least first-in-Frederick) Dungeons and Dragons bed-and-breakfast. Scheduling a retreat is simple. Just visit the Adventure Away website and select a weekend booking. That Friday, you’ll meet in Frederick for check-in and introductions. For the rest of the weekend, you’ll enjoy five catered meals (plus snacks!) and up to 12 hours of gaming with your fellow guests.

Reese and Denier officially launched the business last week and already scheduled a handful of retreats in June and July. Denier, a long-time D&D player, will serve as the company’s resident Dungeon Master — a sort of referee and narrator who oversees the game as it’s played.

DMing a round can be thankless work, but it’s vital to the structure of D&D, a game that fundamentally relies on communal storytelling. Along with setting a scenario for players and acting out the secondary characters, DMs maintain a sense of structure and order in a fantasy world.

Just last week, Denier DMed a game of D&D that he and Reese organized to promote the launch of Adventure Away. Not only was he responsible for setting the quest (ridding an abandoned manor of goblins and collecting treasure in the dungeon), but also for ruling how successful players were during their turns.

Want to kill a goblin with a whip? First you’ll have to roll the game’s infamous 20-sided die, a tool that can lead to devastating failure or exhilarating success. Roll an 18, and maybe your whip slices the monster in half. Roll a one, and maybe the goblin sinks its teeth into your shoulder, instead.

“There’s a freedom and an excitement that comes from the element of chance, and of course you’re building a story together with all these people,” Reese said. “Games are wonderful things in that they can bring people together. And that’s really what we envision — that you’ll make friendships at these retreats that are going to last a lifetime.”

Weekend retreats with Adventure Away start at $455 for an individual player, including a private room and five catered meals. The most challenging part of marketing, in Reese’s mind, comes from that expense — after all, a Dungeons and Dragons starter set costs less than $20 on Amazon.

Still, she added, what she and Denier are offering is an experience — a chance to bond over role-playing without the inconvenience of juggling schedules or hosting a crowd of people. And these days, Dungeons and Dragons is no longer a niche experience. The game is featured on “Stranger Things,” one of the biggest hits produced by Netflix. An entire episode of the NBC show “Community” focused on its main characters playing the game. Show creator Dan Harmon even has an entire web series that revolves around him and his friends playing D&D in front of a live audience.

Even locally, Reese was struck by the breadth and enthusiasm of the gaming community in Frederick. She and her husband initially planned to save Adventure Away for their retirement, until Denier got involved as a DM with “Oh Crit,” a Dungeons and Dragons improv group with the Maryland Ensemble Theatre.

The group was founded by Callan Holderbaum and Jordan Patterson, two former Frederick residents who decided to combine their love of improv and storytelling with the popular tabletop game. Holderbaum had never even played Dungeons and Dragons. But on show nights, he gets on stage with the rest of the cast and essentially acts out a round (often with Denier as the DM), with actions based on real rolls of the 20-sided die.

“So, essentially, we’ll roll to see if something happens or if something fails,” Holderbaum said. “It’s all happening in real time and the scenes are completely made up on the spot, so as performers and improvisers, we have to go along with the story.”

Reese attended the group’s first two performances last year and was absolutely floored by the response. The MET’s venue on West Patrick Street was completely sold out, to the extent that the theater had to bring in separate chairs and seat some guests on the floor.

“I sat there and looked around that room and was like, ‘This is the time to do this,’” Reese said. “‘Look at how popular it is now!’”

Steven Martin, who co-owns the private club Historic Haven in Frederick, is also convinced. When he and co-founder Thomas Handwerker started the group about 10 years ago, it was with the idea that the gaming and historical re-enactment community in Frederick — a diaspora of diverse residents — needed a dedicated space to pursue their interests. Today, the club hovers between 165 and 185 members at any given time, at least half of whom, Martin said, play Dungeons and Dragons or other role-playing games.

“I would definitely agree that far from being stigmatized, D&D has become a lot more mainstream,” Martin said. “There’s a number of major celebrities now who are like, ‘Yeah, I play D&D all the time.’ So, as far as the bed-and-breakfast goes, if you’re going to do something like that, now is the time to do it.”