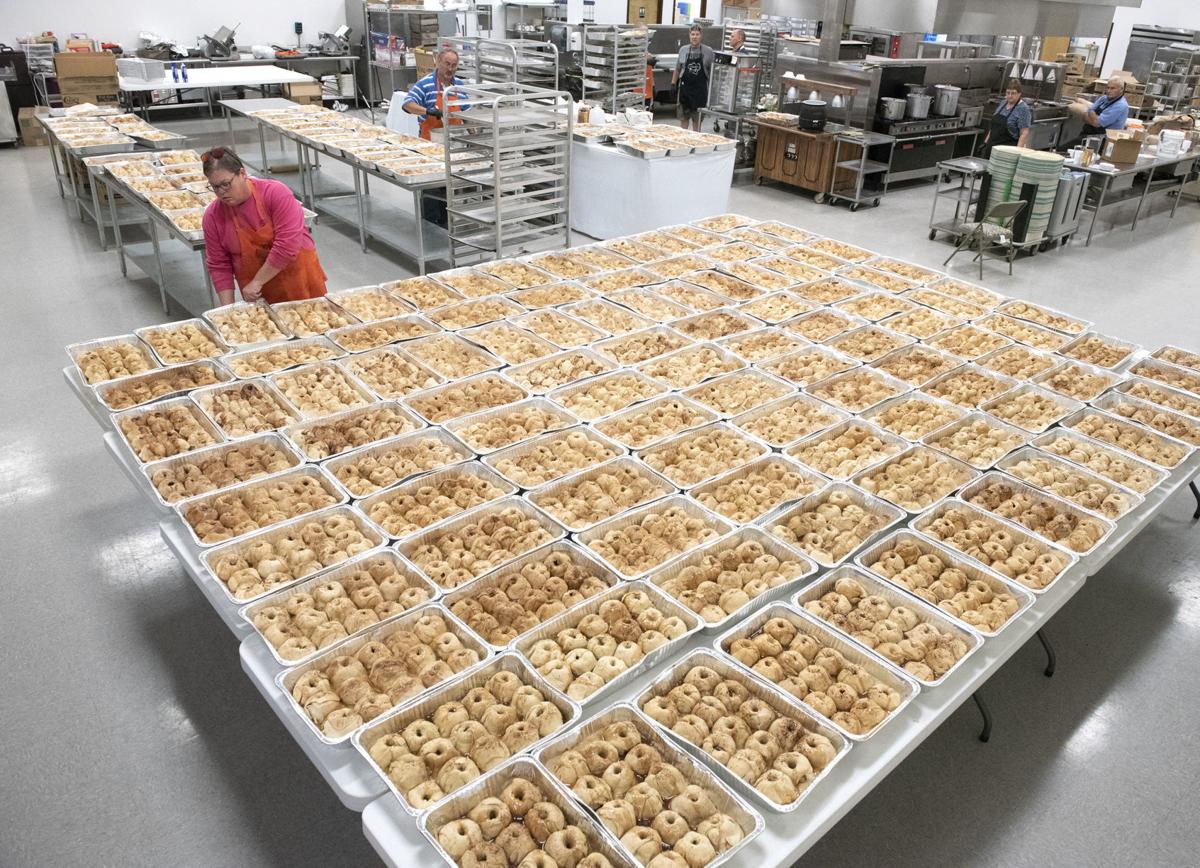 Jen Frushour, left, checks trays containing about 2,100 apple dumplings cooling on a table Wednesday at Thurmont Community Ambulance Service. Once the dumplings have cooled, the trays will be covered in foil and held in a walk-in refrigerator until they are offered for sale at Colorfest over the weekend. 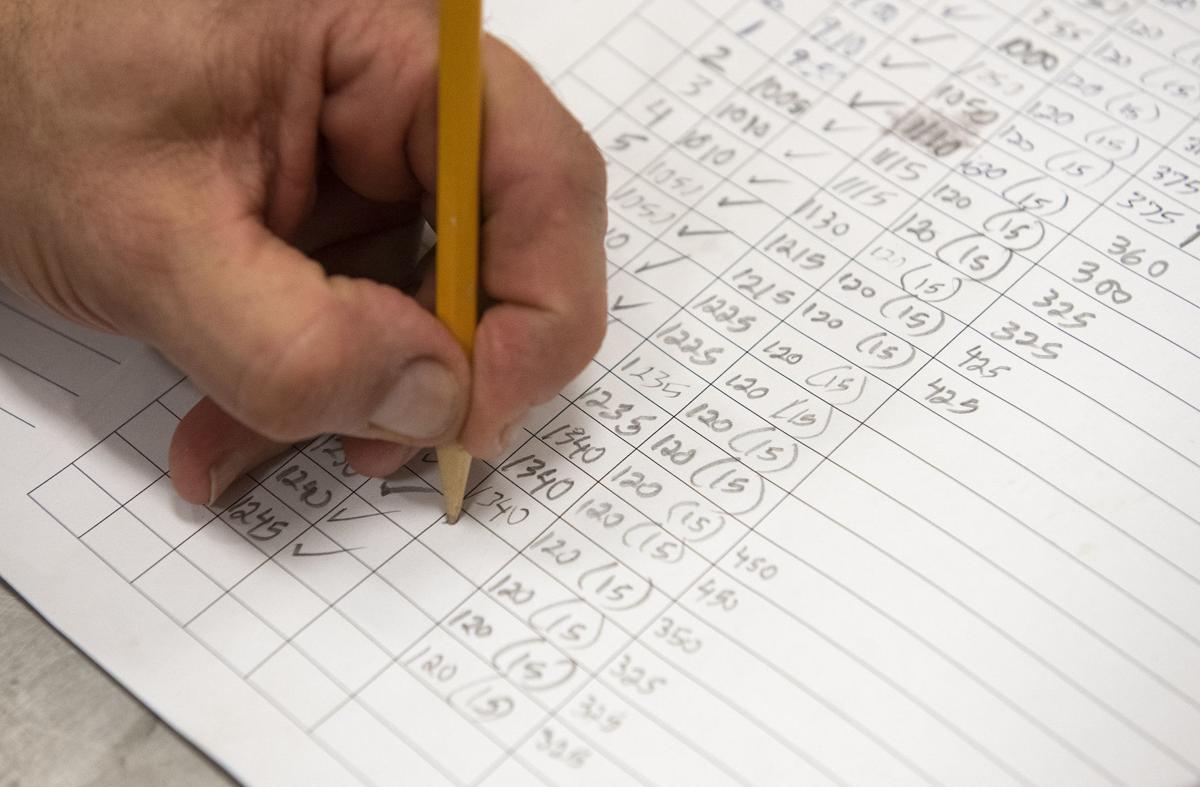 Chris Pigula keeps records of the baking, noting time, temperature and totals, as he rotates between six ovens. 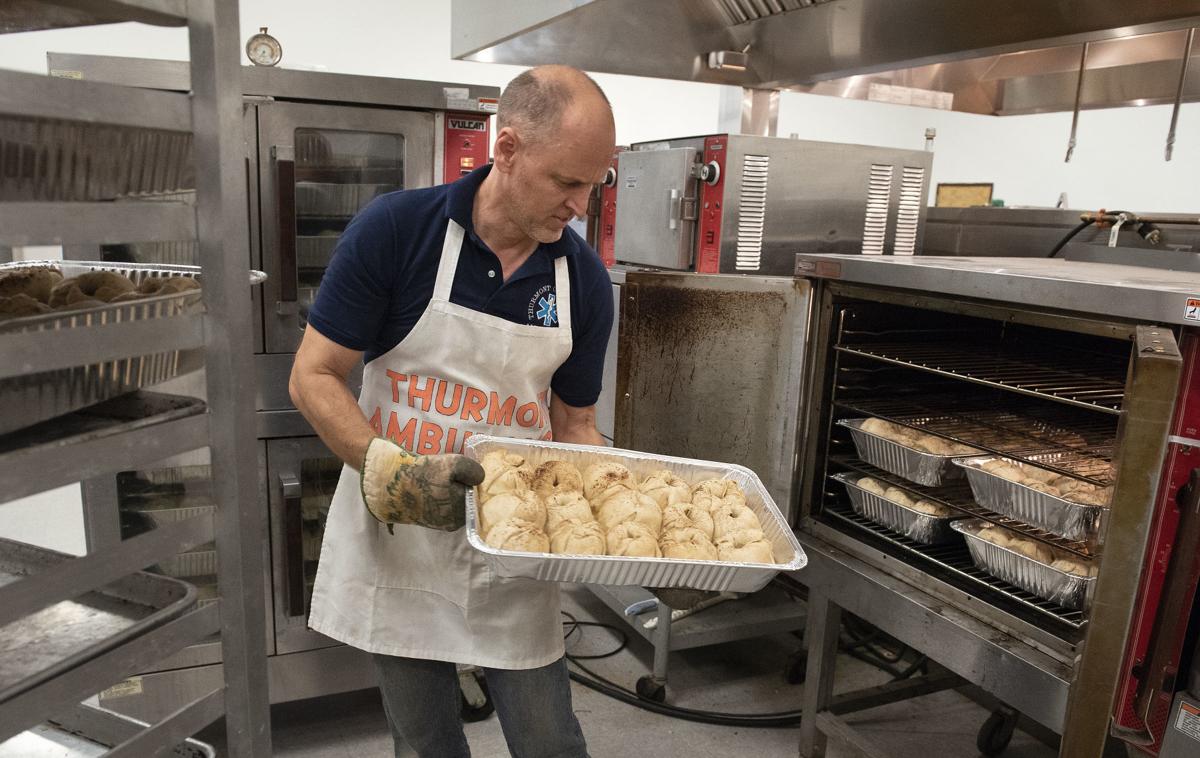 Chris Pigula, an EMT at Thurmont Community Ambulance Service, unloads a tray of apple dumplings Wednesday from one of six ovens used to bake 10,000 dumplings over three days for this year’s Colorfest. He keeps six ovens filled with trays, and by rotating between ovens, he can bake 720 dumplings at a time. 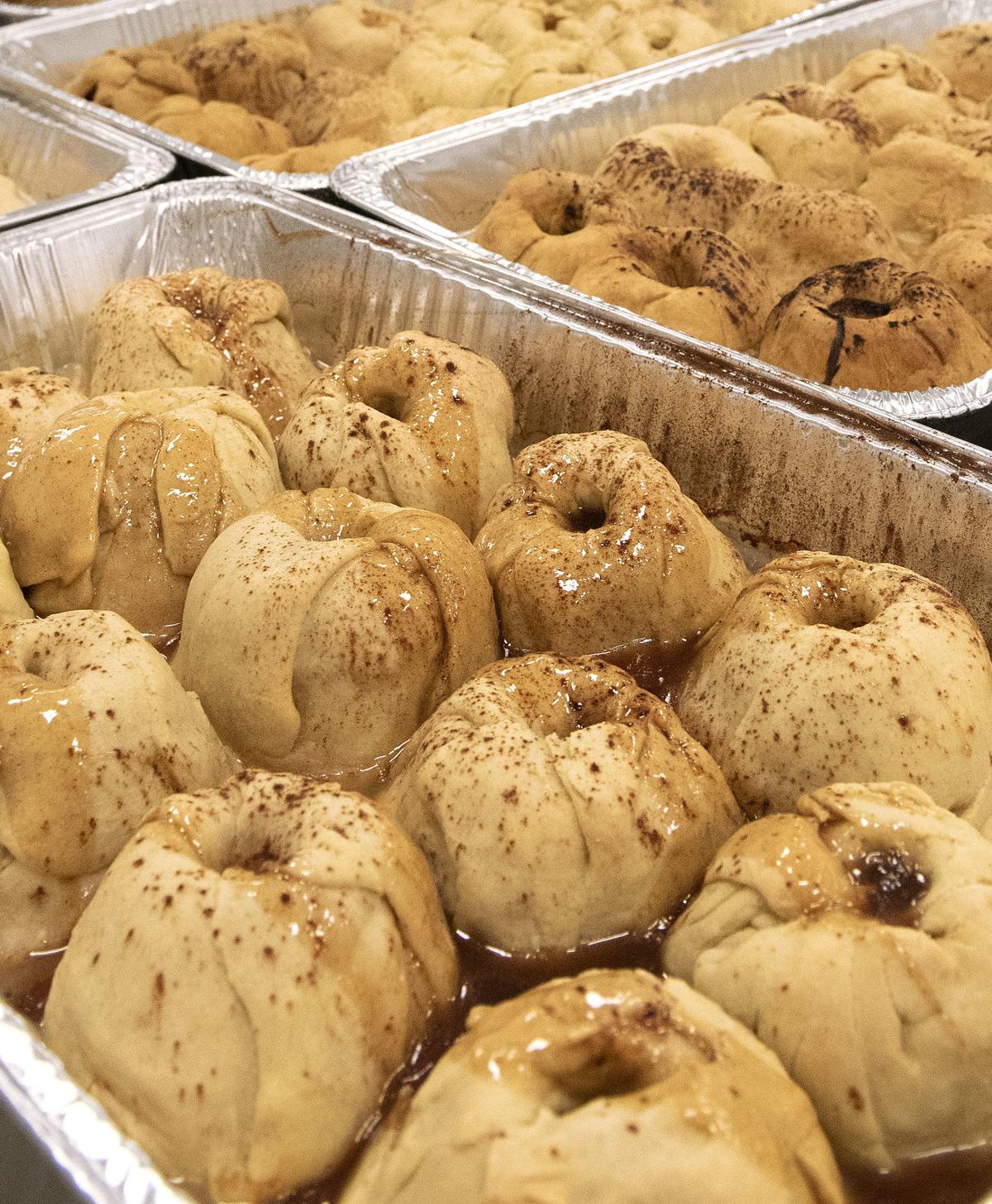 Some of the 10,000 apple dumplings to be sold at Colorfest over the weekend. 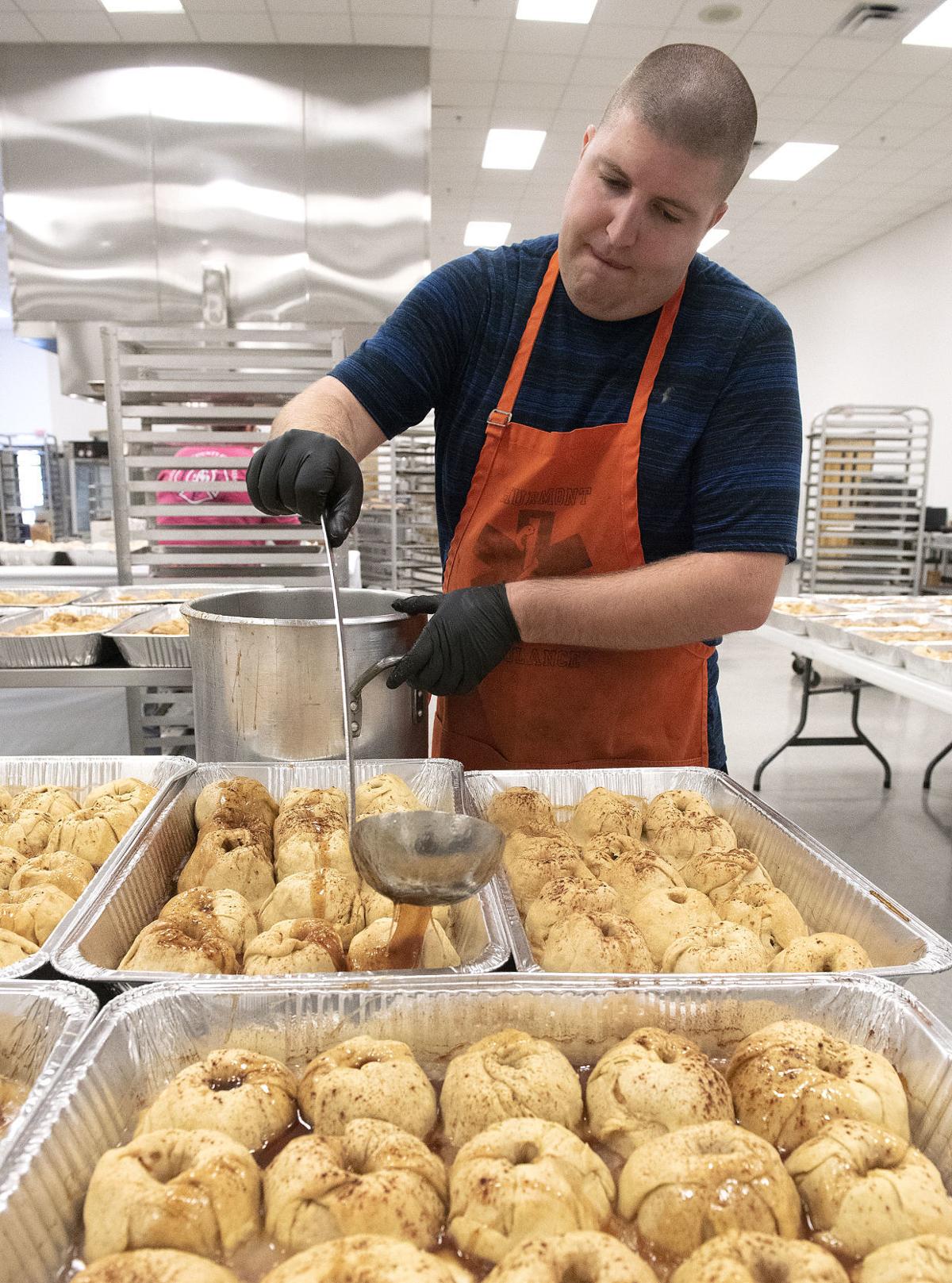 Travis Unger, an EMT with Thurmont Community Ambulance Service, spreads syrup on apple dumplings Wednesday that are just out of the oven.

Jen Frushour, left, checks trays containing about 2,100 apple dumplings cooling on a table Wednesday at Thurmont Community Ambulance Service. Once the dumplings have cooled, the trays will be covered in foil and held in a walk-in refrigerator until they are offered for sale at Colorfest over the weekend.

Chris Pigula keeps records of the baking, noting time, temperature and totals, as he rotates between six ovens.

Chris Pigula, an EMT at Thurmont Community Ambulance Service, unloads a tray of apple dumplings Wednesday from one of six ovens used to bake 10,000 dumplings over three days for this year’s Colorfest. He keeps six ovens filled with trays, and by rotating between ovens, he can bake 720 dumplings at a time.

Some of the 10,000 apple dumplings to be sold at Colorfest over the weekend.

Travis Unger, an EMT with Thurmont Community Ambulance Service, spreads syrup on apple dumplings Wednesday that are just out of the oven.

With the Catoctin Colorfest set to begin Saturday, the town of Thurmont prepares to once again host more than 20 times its population over the course of the two-day festival.

“We only have a population of 6,000 people, give or take, but during the event we’ll have upwards of 125,000 people come through, so it brings a lot of awareness to our little small community here in Thurmont,” said Carol Robertson, president of Catoctin Colorfest Inc., when reached for comment Tuesday.

Hotels and campsites for miles around are booked solid during the event, which also provides a huge boon to other local businesses in and around Thurmont, even as far away as Hagerstown and Gettysburg, Pennsylvania. Aside from lodging businesses and gas stations, which benefit directly from the increased traffic, the festival also provides a great venue for area churches, nonprofits and service organizations to capitalize on fundraising events to further their causes, including the Thurmont Community Ambulance Service, which has become famous for the apple dumplings and ice cream it sells during the festival each year to raise money.

“As of today they’ve made 10,000 apple dumplings and I believe they’re going to start baking tonight,” Robertson said. “That’s a major, major fundraiser for them each year, but all the food we have is really nice.”

Our Lady of Mount Carmel, a church in Thurmont, makes crab cakes and starts serving breakfast early. Another vendor specializes in crepes, Robertson said. The event features pierogi and a Turkish grill as well, she added.

The food won’t be the only draw for the festival. The juried portion of the festival alone will encompass Thurmont Community Park with 240 vendors scheduled to set up in the park. Including vendors and stalls set up outside the park, the event will likely feature closer to 800 vendors, selling hand-crafted jewelry, floral designs, clothing, artwork and other goods, Robertson said.

The event will also feature several other performances in the park on Saturday and Sunday, including a presentation by a blacksmith, a demonstration by jewelry makers and a number of musical acts.

“We have the ESP dancers. They’ll be performing on Saturday and Sunday, and on Sunday afternoon also there will be an Irish dance group performing as well, from the McGrath Morgan Academy of Irish Dance,” Robertson said.

In addition to most roads surrounding the park, Frederick Road will be closed from Moser Road to its terminus at Water Street, and Main Street will be closed to most traffic to allow buses easier access to the park from the parking areas around town. Buses will run between Thurmont Community Park and the four designated parking locations at Catoctin High School on Sabillasville Road, Eyler Stables Flea Market on Emmitsburg Road, NVR Building Products Co. on Apples Church Road and Thurmont Elementary School on East Main Street.

While the traffic and crowds the festival brings to the small town is a source of annoyance to some residents, Robertson argued that the benefits far outweigh the few drawbacks over the weekend.

Using the proceeds from the event, the festival organization provides 250 canned ham donations to the local food bank, pays for six Christmas meals for families in need identified by local churches and schools, Robertson said. The organization also funds three scholarships and makes donations to local service organizations, including the ambulance service, the Thurmont Police Department and the local fire company, Robertson added.

“Through just our organization we give $20,000 back to the community each year after it’s all said and done,” Robertson said. “It’s a tremendous amount for a small community like this.”

An earlier version of this story had the wrong name for the dance company that performed at the festival. The performance was put on by the McGrath Morgan Academy of Irish Dance. Also, the story incorrectly indicated that the Thurmont Historical Society was hosting a beer garden during the festival this year.

Catoctin Colorfest runs from 9 a.m. to 5 p.m. Saturday and Sunday in Thurmont Community Park. Parking areas with bus routes running directly to the park will be set up at the following locations:

First aid stations will be staffed at the event, including at the front entrance of Thurmont Community Park where Thurmont Community Ambulance Service will have its apple dumpling stand, at the back of the park near the ATM, at the American Legion on Park Lane and at Moser and Frederick roads.

ATMs will also be set up at points around the festival, including one in the park itself.

For more information, including a full list of scheduled vendors, visit www.colorfest.org.

I go to Colorfest, but I have to admit I did my grocery shopping today.. LOL And even today was a hot mess of people stopping and parking on the streets for yard sales. And looking left from Moser Rd sure did not look very "Colorfest" like.. more like the strip mall it has become

Oh joy! Now we can't even park in front of our own homes in some areas! Someone looking for "free" parking will undoubtedly take it so...be sure to get all your groceries and other provisions and bunker down for the duration. We don't want the local businesses to suffer as you do even if the town itself loses money as it has in the last few years. How a simple nature walk for leaves changing colors turned into this, I'll never know?!

I grew up in Lewistown, and I always referred to this as "Avoid Thurmont Weekend".

"A source of annoyance to some residents" is a gross understatement.

It is an annoyance but it brings business to many of our small mom and pop shops and restaurants. We can suffer through one weekend to help keep them in business.

KR999 Exactly! And with the town losing money for this from year to year, as they reported, that means they have to pull more money from their tax revenue account to provide services the rest of the year. The result is the town asking for more money from the county the following year. So...indirectly, Colorfest is taxpayer supported.

This is not correct. Yes, some years in the past, the town has lost money on the colorfest, but most years they do not. The Town has already address this rumor before.

newspostreader: This is no rumor. Yes, the town several years in the past did not lose money. But, as was reported by this very newspaper, it has lost money in the last 2 years, which is why there was an argument in the town council for raising parking fees from $10 to $15 hoping that will fix the problem. Last year it didn't. Maybe this year, it might.

Give Kids a Smile Day

Love is in the Air Fundraiser