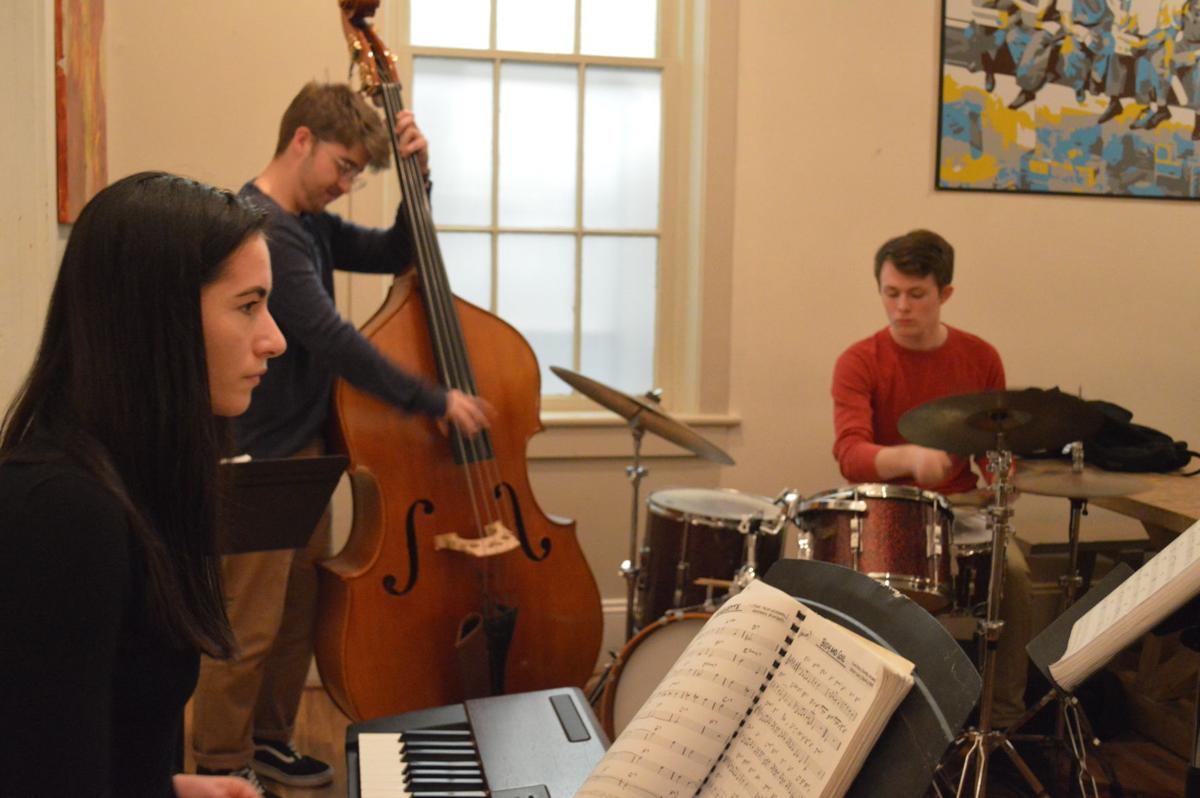 Daisy Levine plays the keyboard while Matthew Holmes, back, plays the upright bass and Tighe Didden plays drums during a jam session. 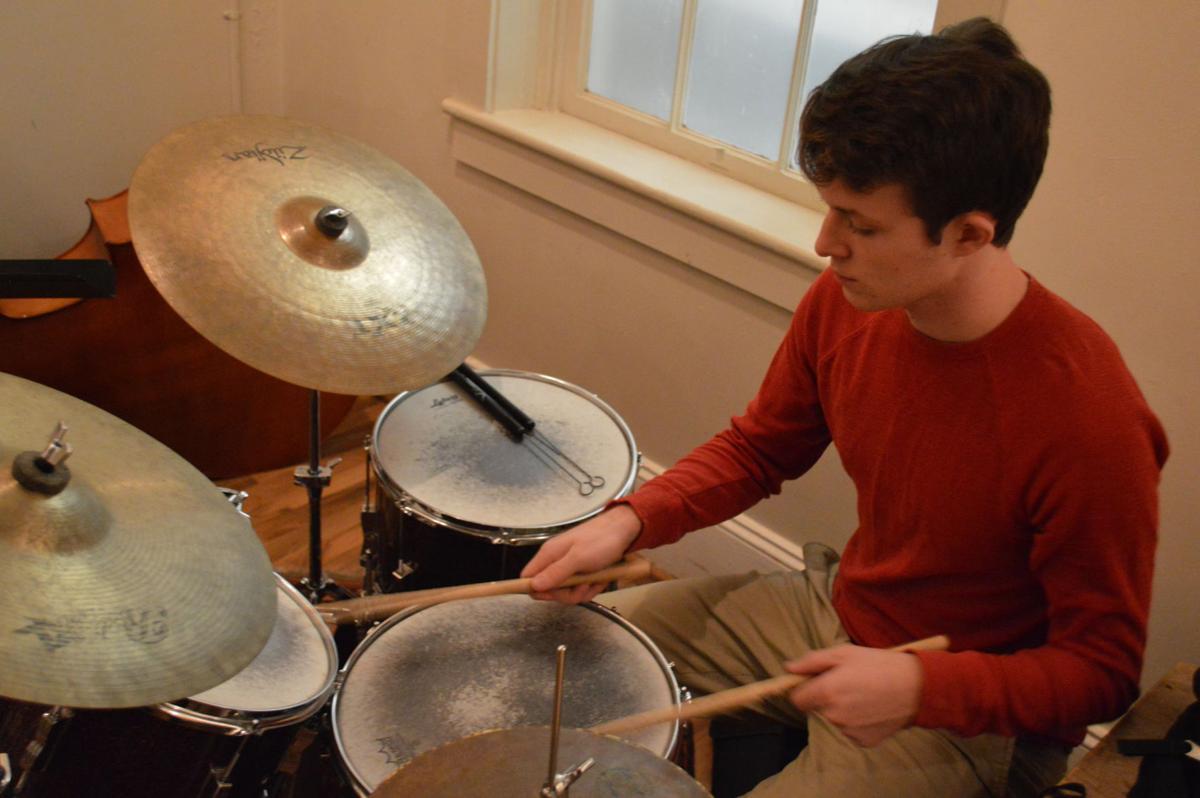 Tighe Didden plays the drums at Domestic Restaurant in Shepherdstown. 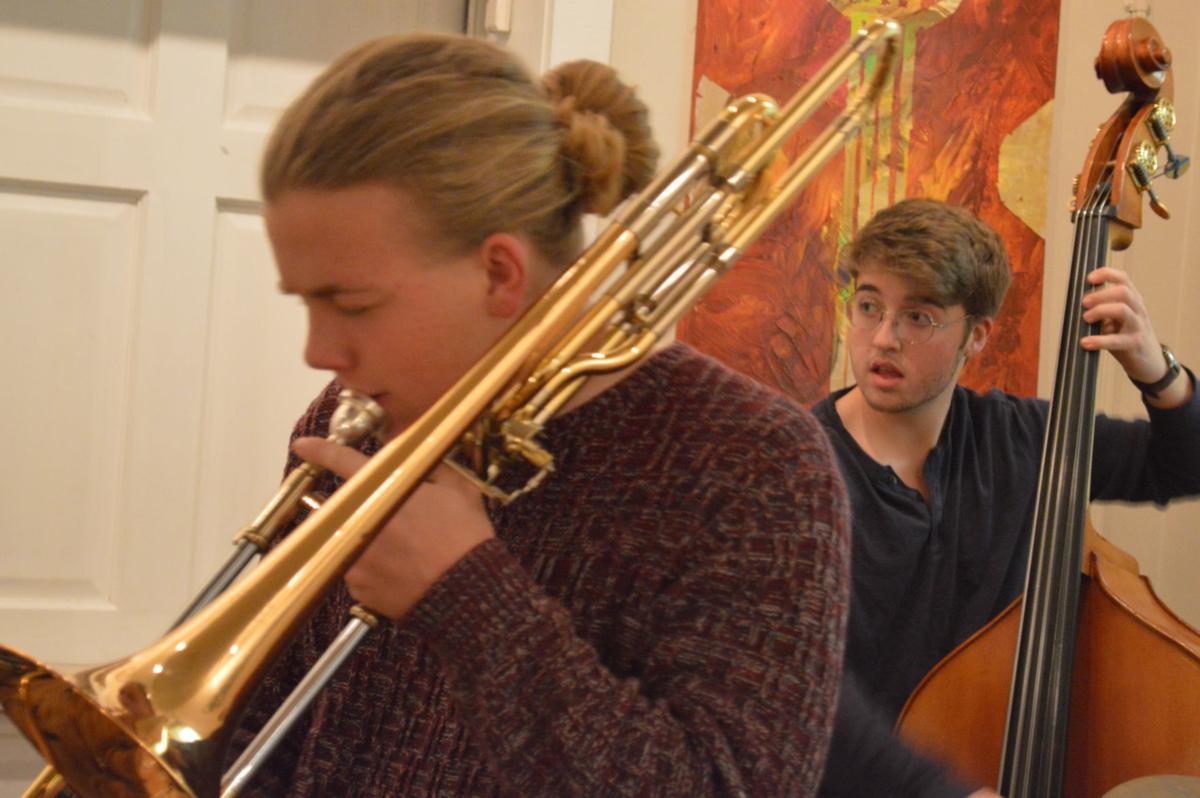 Daisy Levine plays the keyboard while Matthew Holmes, back, plays the upright bass and Tighe Didden plays drums during a jam session.

Tighe Didden plays the drums at Domestic Restaurant in Shepherdstown.

This was supposed to be an easy story. When I was searching for art events in Shepherdstown, I came across a listing for a jazz jam session. Jazz in West Virginia? That sounds weird. What was even weirder, in my mind, was that this jazz jam session was made up of teenaged musicians led by 18-year-old upright bassist Matthew Holmes. Clearly, there was something going on that I needed to learn about.

I drove to Shepherdstown thinking I would cover some type of Kidz Bop jazz session and go home. But the story deepened when I learned that throughout the past year, the jazz programs at Shepherdstown Middle School and Jefferson High School were named the best programs in West Virginia. According to Chad Conant, the jazz ensemble director at Shepherdstown Middle, a rule had to be made that prevented consecutive wins because her ensemble was so dominant.

And this jazz pipeline goes all the way to Shepherd University, where Shepherd's jazz ensemble has frequented festivals and toured throughout Europe.

Mentoring the future of jazz

In a time where funding for music education seems like a thing of the past, it's possible to become an advanced jazz musician in Shepherdstown before you're old enough to drink. And when these jazz musicians get older, like Jesse Shultzaberger and Matthew Lewis of the jazz fusion band Ginada Pinata, they invest in new musicians and identify prodigies like Holmes.

"He had a smaller bass then and it still looked big in his hands," said Lewis, Holmes' music teacher at the time. Lewis shared this memory before his own jazz jam session at the Mecklenburg Inn a week later. "I knew that [Holmes] was something special probably about the second or third time I started teaching."

Holmes is often talked about as though he's the "chosen one" in Shepherdstown's jazz scene. The bebop jazz lover started the weekly jam session at Domestic. He played mostly straight ahead jazz covers of Christmas songs with his friends, drummer Tighe Didden, trombonist Andrew Kelvington, and pianist Daisy Levine, who played with one hand while her other hand was in a soft cast.

The ensemble was constantly looking at each other during music changes. Holmes, who stood in the back, had an intense focus as he switched from being a musician to a bandleader. When he was playing one frenetic bass line after another, he seemed to be mouthing motivational words to push himself further.

The young leading the young

During a break between songs, Holmes encouraged a young trumpeter to join the ensemble, and though he hesitated, he eventually joined the group. For the next generation of musicians, Holmes is a gatekeeper.

"The only exposure I have to it is that I followed Matt around," Didden said of the local jazz scene. "Just by being around them, I get to pick up their enthusiasm for it."

"I'm younger than these guys are. They just opened doors," Kelvington also explained. "I love the fact that I'm 17 years old and I'm doing what I want to do for the rest of my life."

These young jazz musicians can appear as old men in teenaged bodies — well, until Kelvington made fart noises in front of Didden during the break.

Not far away was JP Lynch, the jazz instructor at Jefferson High School who teaches everyone in Holmes' ensemble.

"We have great elementary teachers, [but] middle school — that's where really, they get the fire that is in them for jazz," Lynch shared. "And then when they get to Jefferson High School, we have two jazz bands. One is taught by my colleague. It’s an intermediate jazz. And then I teach the advanced and by the time I get them, they're just passionate about the music. Really, it’s a lot of work keeping up with them because they're so hungry. I'm always looking for new pieces. And they do this on their own ... we're just here tonight on a date."

As Lynch spoke, I knew my to-do list was growing a lot longer. I would have to explore the public school system and the mentors who foster the local jazz talent.

The fathers of Shepherdstown jazz

Instructors like Shultzaberger and Lewis have been laying the groundwork for Shepherdstown's jazz scene for years. Lewis, who moved to the area in 1992, can remember how barren the college town looked.

"In the summertime," he explained, "there might be four cars on main street. No one was here. The population grew at least 10 times since I came here. It's grown a lot."

You can't tell that now. Lewis and Shultzaberger have consistent gigs and a fanbase thanks to word-of-mouth and social media.

"It's a logical progression for us — we're basically self-employed," Shultzaberger said of the flexible hours they have to teach. "The cool thing for me about teaching is I can go to work and I'm playing drums for five hours."

"As long as we're still teaching, the students are going to come," Lewis said. "The trick is getting them to move back after they finish school. Everyone wants to go off and make their fortunes."

Lewis hopes that after his students head out to schools like Marshall and West Virginia University, they come back and invest in the local jazz scene like he did.

When Lewis and Shultzaberger played at their jazz session, it was clear that they didn't plan to move anywhere.

The ensemble explored compositions that had the openness of free jazz arrangements. The musicians were loose, and unafraid to show their personality. Ginada Pinata are known for embracing funk as well as jazz-style covers of Nirvana and Bob Marley.

Shultzaberger played quick rim shots, and when it was time for Jacob Smith to perform a sax solo, it was as if electricity flowed through his body. Smith bounced up and down with one long riff after another.

Musicians of different ages swapped in and out. An elderly man stood with the ensemble to play an instrument that looked like maracas.

"It's more of a family vibe in West Virginia," guitarist Ken Bussey said at the Broad Axe in Hagerstown, where another jazz jam commences on Thursday nights.

"I think Frederick is a little bit more uptight with their jazz," Lewis commented without hesitation.

"I think the closer you get to D.C., the caliber just keeps going up for musicians," Smith added. "It has to be kind of be exclusive."

"Here [in West Virginia], there's hardly any musicians, so we got to let everybody come in and play," Bussey said. "They're not going to let the guy with the triangle play in D.C."

"We had a recorder player play for one night. She was actually playing weirdly well," Bussey said. "She came in with drumsticks. We thought she played drums. And then all of a sudden the drum sticks were in her pocket [and] she got down on the recorder."

There were no recorders in Conant's jazz ensemble at Shepherdstown Middle school.

I sat a few feet away at the front of the class, shocked. What do these West Virginia kids know about Cab Calloway? I thought these kids listened to Katy Perry.

"That's what we want!" Conant shouted with glee. The slender Conant conducted with her arms outstretched as if she was reaching for her students.

"End each of those little phrases with your tongue," Conant said.

She's part bandleader, part tutor in sharing exactly how her students should play their instruments to get the sound she desires. Conant doesn't shy from telling musicians to step it up, but she's also liberal with compliments.

The room seemed to surround the students with greatness. Banners and trophies lined the walls. Photos of past performances were framed and spread around the room. And when students stood up to perform their solos, there was an expectation to produce a sound that matched the achievements of ensembles past.

A few years later, and those trumpet players in Conant's class could be standing on chairs in Lynch's advanced jazz class. With so many musicians, horn players must stand on chairs to be seen by Lynch. The cavernous room at Jefferson High School was also lined with trophies of various heights in the back of the semi-circle space.

"If you can't hear the bass, that's too loud," Lynch said. That bass was played by Holmes.

Lynch focused on the nuances of jazz compositions. He was quick to say that even if a song is played technically right, intricate details can be missed. Somber music played out of an old, wooden framed speaker so students could model what they heard.

"Compared to the first time, it was pretty rough," Lynch commented when his ensemble performed a piece they were practicing for the second time. "That was a tremendous improvement in one time, through."

To the laymen's ear, the ensemble's rehearsal sounded straight from a Blue Note record. Lynch, however, listened for the spaces in music that should be filled with sound or silence. He made sure the horns were timed properly and asked the horn section to sing the melody of their parts several times during rehearsal.

A little later, the band played a composition that could have been on a "James Bond" soundtrack. I imagined the band performing in a fancy lounge while well-dressed people drank martinis.

"I think that's a very beautiful piece for us," Lynch said.

After his class, Lynch told me that this was only the fourth rehearsal of the semester. The polished music I heard was the product of just four days of instruction.

"I used to talk a lot more in class," Lynch said. "I found that,you can't really explain how something sounds. You just have to hear it. They're a pleasure to work with."

"I think that's what jazz is all about," Bussey said. "A bunch of people coming together playing."

With holiday music by the Bell Choir of Mount Airy Presbyterian. Motorcade starts at 5 p.m.,…

With holiday music by the Bell Choir of Mount Airy Presbyterian. Motorcade starts at 5 p.m.,…