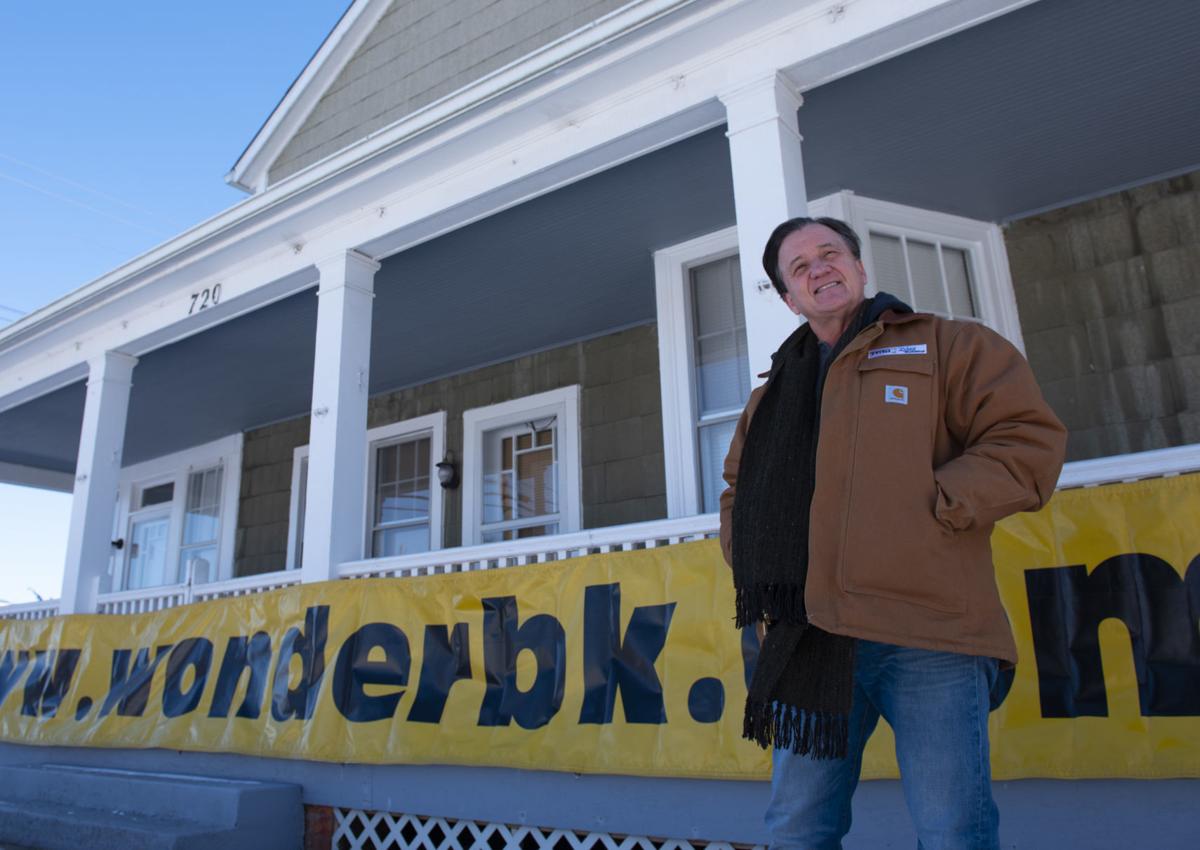 Chuck Roberts, owner and founder of independent bookstore Wonder Book and Video, stands outside a farmhouse on East Street in Frederick in February. He hopes to convert the space into a bookstore and brewery and is one of several local store owners who were recently celebrated on Independent Bookstore Day. 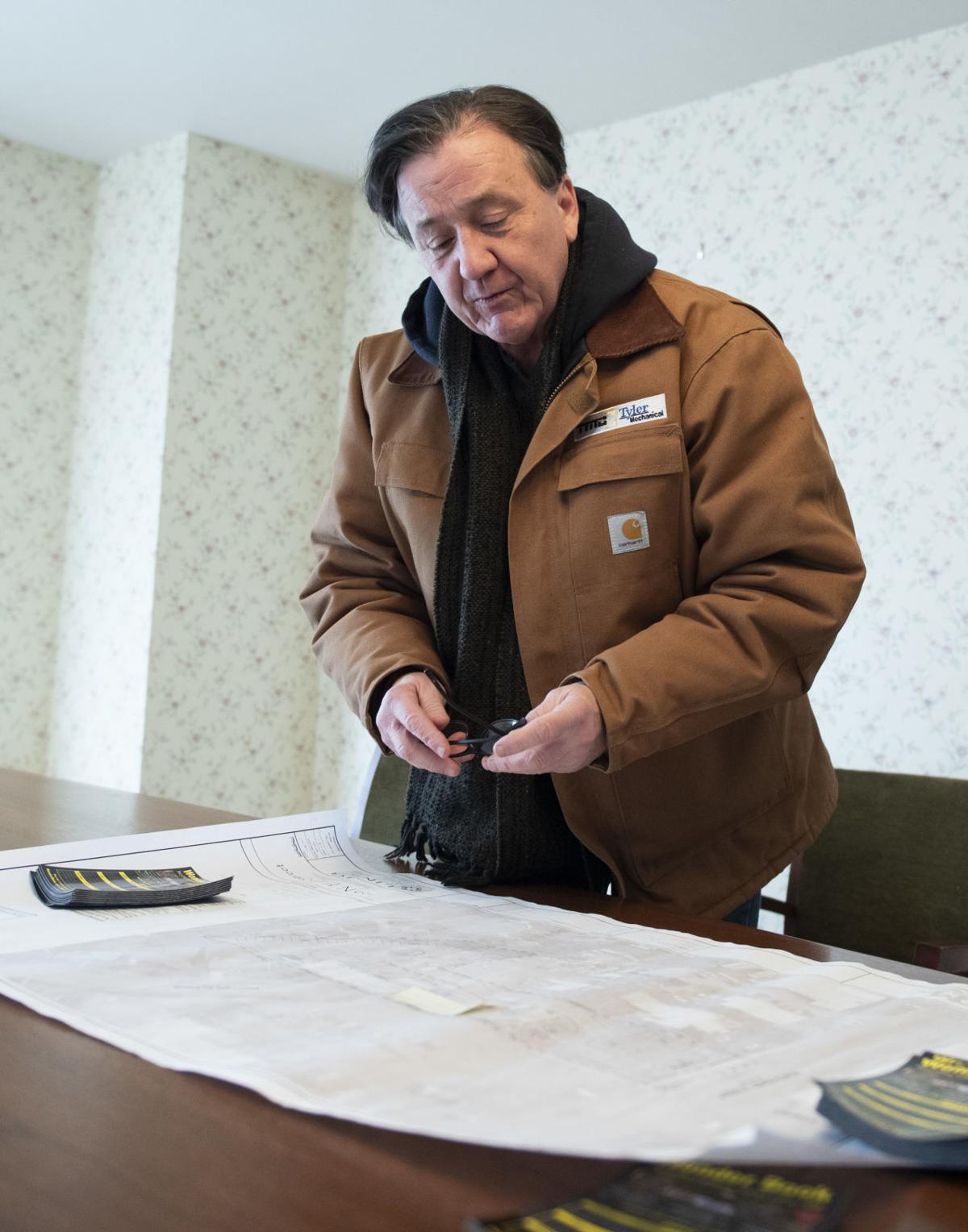 Chuck Roberts, owner and founder of Wonder Book and Video, looks over design plans he hopes to implement at a farm house on East Street. 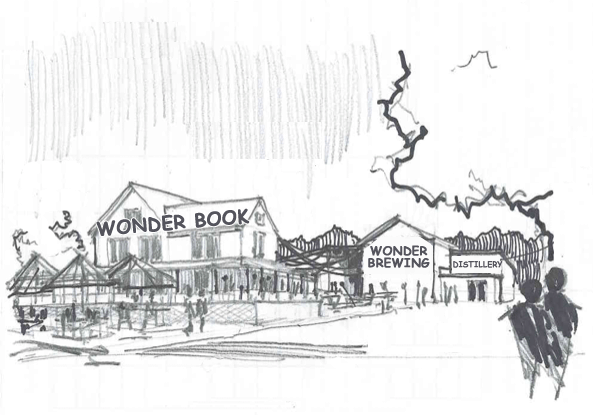 Chuck Roberts, owner and founder of independent bookstore Wonder Book and Video, stands outside a farmhouse on East Street in Frederick in February. He hopes to convert the space into a bookstore and brewery and is one of several local store owners who were recently celebrated on Independent Bookstore Day.

Chuck Roberts, owner and founder of Wonder Book and Video, looks over design plans he hopes to implement at a farm house on East Street.

The inside of the Wonder Book warehouse on Tilco Drive is a bibliophile’s dream — roughly three acres packed with millions of books, all on some stage of their journey to new ownership. Some of them will end up at one of Wonder Books’ three retail locations in Frederick, Hagerstown and Gaithersburg, or be sold on one of the 15 to 18 websites where the store peddles its wares (including the proprietary www.wonderbk.com).

Thousands of them will be funneled into the “Books by the Foot” program, which repurposes low-demand texts for aesthetic uses. Those books are generally sorted by size, subject, or color palette (try “deco monochrome,” a mix of black, white, and gray) and sold to designers, advertisers and even movie sets for staging. One particularly vibrant Cole Haan window display featured stacks of books in bright primary colors holding up pairs of designer shoes. Wonder Book doesn’t keep track of the texts after they’re sent off through the program, but it’s at least a temporary deferment from a grimmer fate: being shredded and pulped for recycling.

“Part of our mission is to find a way to turn every book that comes in here into a nickel, a dime, a dollar,” said Chuck Roberts, the founder and CEO of Wonder Book. “Otherwise, people would just destroy them.”

It’s a strategy that might also help explain why Wonder Book survives, in three locations, no less, in an era when brick-and-mortar bookstores are still on the decline. Roberts might be too modest to admit it, but his adaptation to industry change is at least part of what’s kept Wonder Book alive since he founded the company in 1980.

The short version of the story is this: Roberts was an undergraduate at Connecticut College in New London when his father died suddenly between his junior and senior year. He moved back home to Rockville to take care of his mother, and ended up finishing his degree at George Washington University. In the spring of 1980, he was planning to go back to grad school for English literature — he planned to become a professor. But that summer, he took a job at the Book Alcove, a used bookstore in Gaithersburg owned by a man named Carl Sickles.

“I just fell in love with it,” Roberts said. “Within a week, my eyes were spinning and I was saying, ‘I’m going to do this. I’m going to do this.’” Sickles gently warned him of the financial risks, but Roberts had already made up his mind. The men were partners in the original iteration of Wonder Book, originally called the Book Alcove of Frederick.

In the early 1980s, Roberts began stocking arthouse films at the store, capitalizing on a then-booming rental market. It was the the first in a series of moves to match industry trends. Sickles wasn’t interested in the transition, and in 1983, Roberts bought out his shares in the company (the two remained close friends until Sickles’ death in 2005). Fourteen years later, Roberts took Wonder Book online. In the late 1990s, the physical stores were still doing great, he said, but it was growing increasingly clear that the internet had retail potential.

“I remember we picked out a seed stock of 40 really exotic books,” Roberts said. “And we put them on this very primitive database and went home.” Their very first online order was a book called “History and Development of Holstein Cattle in Frederick County,” written by local dairy farmer John Homer Remsberg and published, logically enough, by the Frederick County Holstein Association.

“I couldn’t sell that book in Frederick,” Roberts said. “But a guy who raised Holsteins in England bought it for $45.” Today, the brick-and-mortar Wonder Book stores are largely feeder sites for online sales. Most of the books purchased by the company are routed through the warehouse and resold digitally.

The transition to online sales, at this point, is almost ancient history. And the future of Wonder Book, to Roberts, looks surprisingly analog. Two weeks ago, he signed the deed on the Clark Farm in Frederick — less idyllically labeled as “720 N. East Street” in a real estate listing from broker Chris Kline.

The property is within sight distance of Family Meal and located squarely on “the new artery into Frederick,” which is how former owner Jeffrey Clark has referred to East Street since it was connected with Interstate 70 in 2009. But for years, the only marker was a small sign with “James Avery Clark & Sons, Inc.” emblazoned in blue capital letters. The wholesale produce business, Clark said, was founded by his father in the 1930s, when most people in Frederick County shopped at small country stores. James Avery bought a used truck after high school and started making weekly trips to the markets in Baltimore, hauling back produce and selling it to local stores.

The property itself, though — a clapboard farmhouse and maze-like barn — has been with the family since the 1920s. When Clark’s grandparents bought the property, it spanned 15 acres and was planted in wheat or corn. Over the years, the family sold the land, bit by bit, until it shrank to its current 1.78 acres. Clark and his two brothers grew up in the farmhouse, like their father before them. His mother raised peacocks in the barn and bred poodles and Afghan hounds. Today, the produce business is still in operation — Clark & Sons supplies the Maryland School for the Deaf and most of the restaurants downtown — but neither Clark or Dwight, his only living brother, have a succession plan for the company. And they’re looking towards retirement. When Roberts bought the property, Clark was excited.

“I don’t think there’s another property in the city of Frederick that still has a barn sitting on it,” he said. “If someone could find a use for it, that would be nice.”

Roberts, as it turns out, has some ideas. His decision to buy the Clark property for $850,000 was so tortured that he booked a trip to Spain just to clear his mind. It’s a process he later detailed in a 10-page blog post titled “WunderBar — A Fantasy.” That fantasy is more clearly laid out in a rendering of the farmhouse attached, by way of a deck, to a craft brewery and distillery built inside the existing barn. Basically, Roberts wants a book bar. He envisions a boutique bookstore snuggled inside the vintage home, selectively stocked with the best and prettiest titles from the Wonder Book warehouse. Customers could browse the books and sip craft beverages from tenant companies leasing out the barn in back. In his headier moments, Roberts can even imagine hosting a small farmer’s market in the summer, with tents pitched neatly on the green front lawn.

“Of course, the grand vision is not to lose money,” he said, snapping back to reality. Chris Kline, Jr., his broker, was quick to point out that the project would likely begin its life as a mere bookstore. The city has already conducted architectural surveys on the property — the original farmhouse is in immaculate shape, Roberts said — but neither Kline nor Roberts has broached the idea of an on-site brewery or distillery with the Frederick County Liquor Board. Even if they did, they’d have to find a tenant willing to rent the barn. And if Roberts can’t stomach the financial impact of the project, he’s still open to selling the property.

In the meantime, though, it’s nice to dream. There’s a big yellow Wonder Book banner stretched across the front porch of the farmhouse, a nod to future potential. There are similar projects stretched across the country, including the Battery Park Book Exchange and Champagne Bar in Asheville, North Carolina. Its owner, Thomas Wright, used to buy titles at Wonder Book. And there’s the house itself, with an avocado-green kitchen and window-lined sunroom that first captured Roberts’ imagination.

“I can just see it lined with bookshelves,” he said, running his hands along the vintage wallpaper. “The property itself is a huge part of this vision. As soon as I saw it, I thought, ‘This is the last farm in the city of Frederick.’”

des21 I agree with you

Grant it, I don't drink but you ever get the feeling Frederick may be a little obsessed with alcohol? Just saying...………..

This will be awesome!!! Books and craft beers - my family will always know where to find me!

Great story! Best of luck to Roberts and Wonder Book.