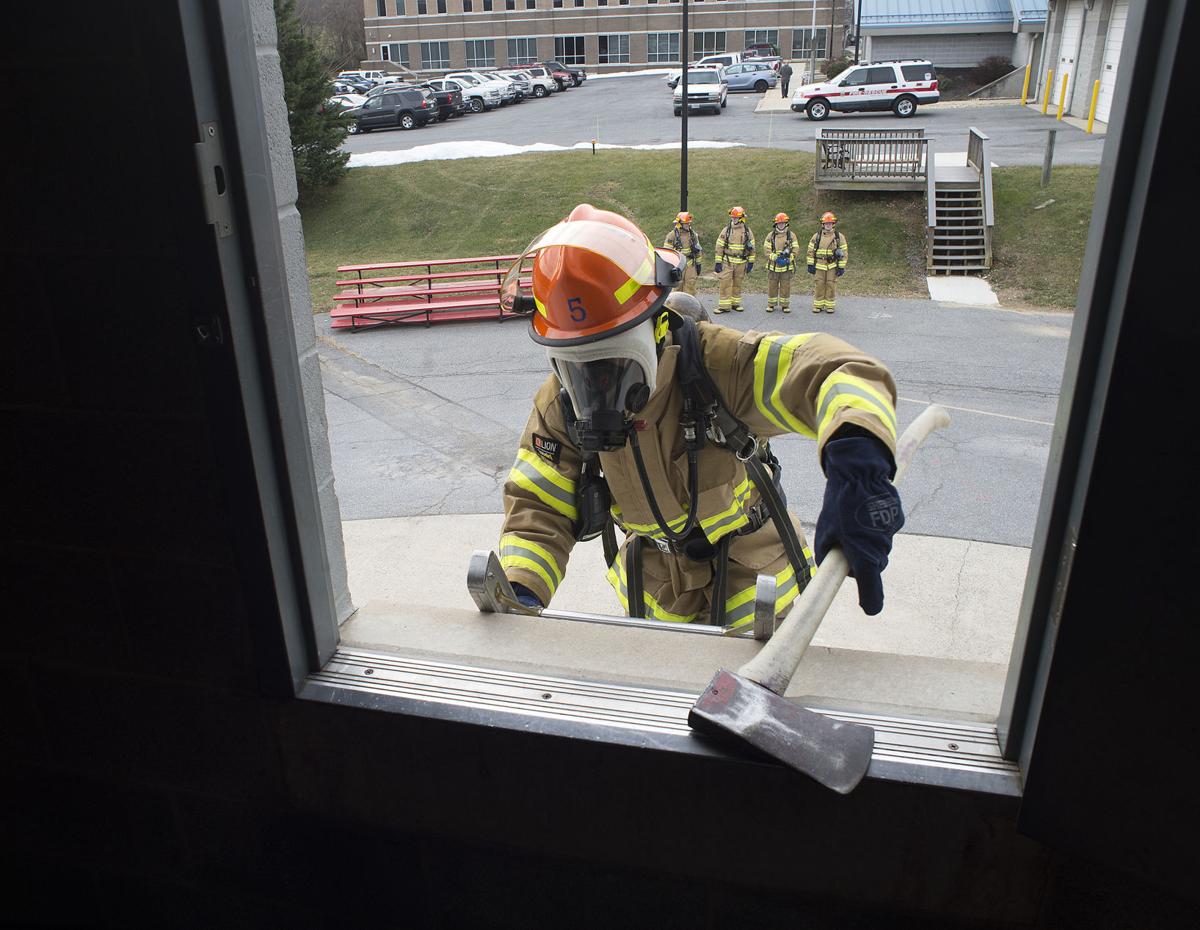 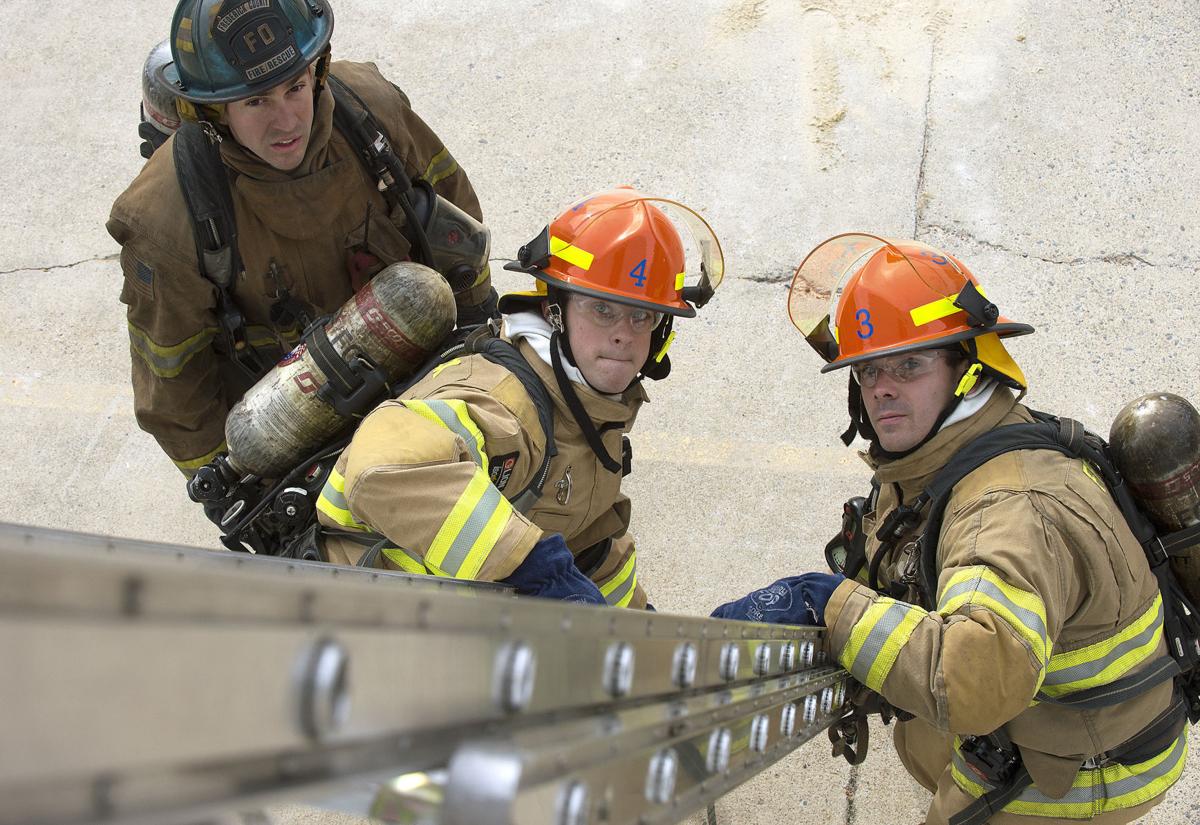 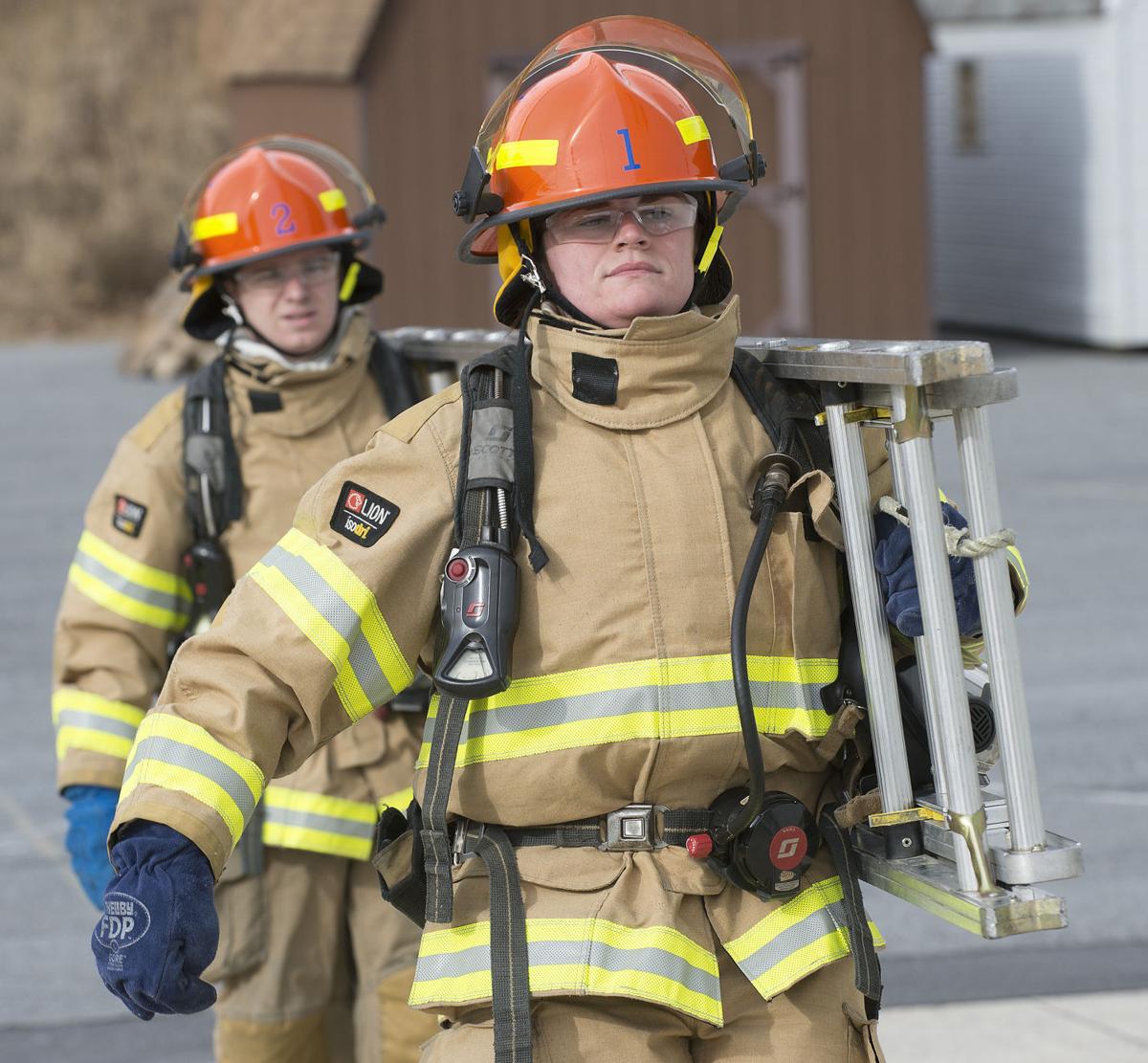 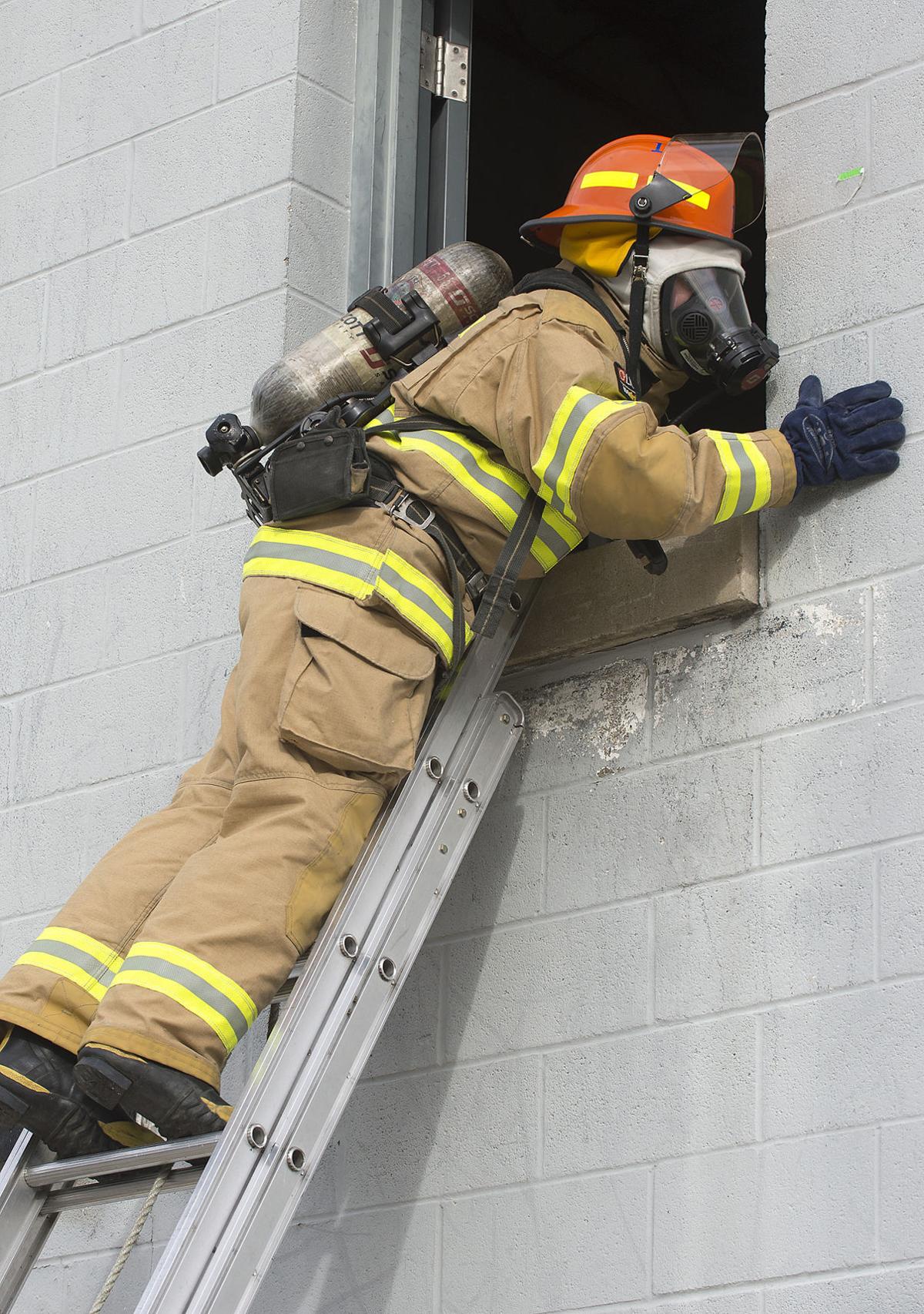 A recruit of Frederick County Fire Training Academy class 21 learns the proper way to enter a window using a ladder. 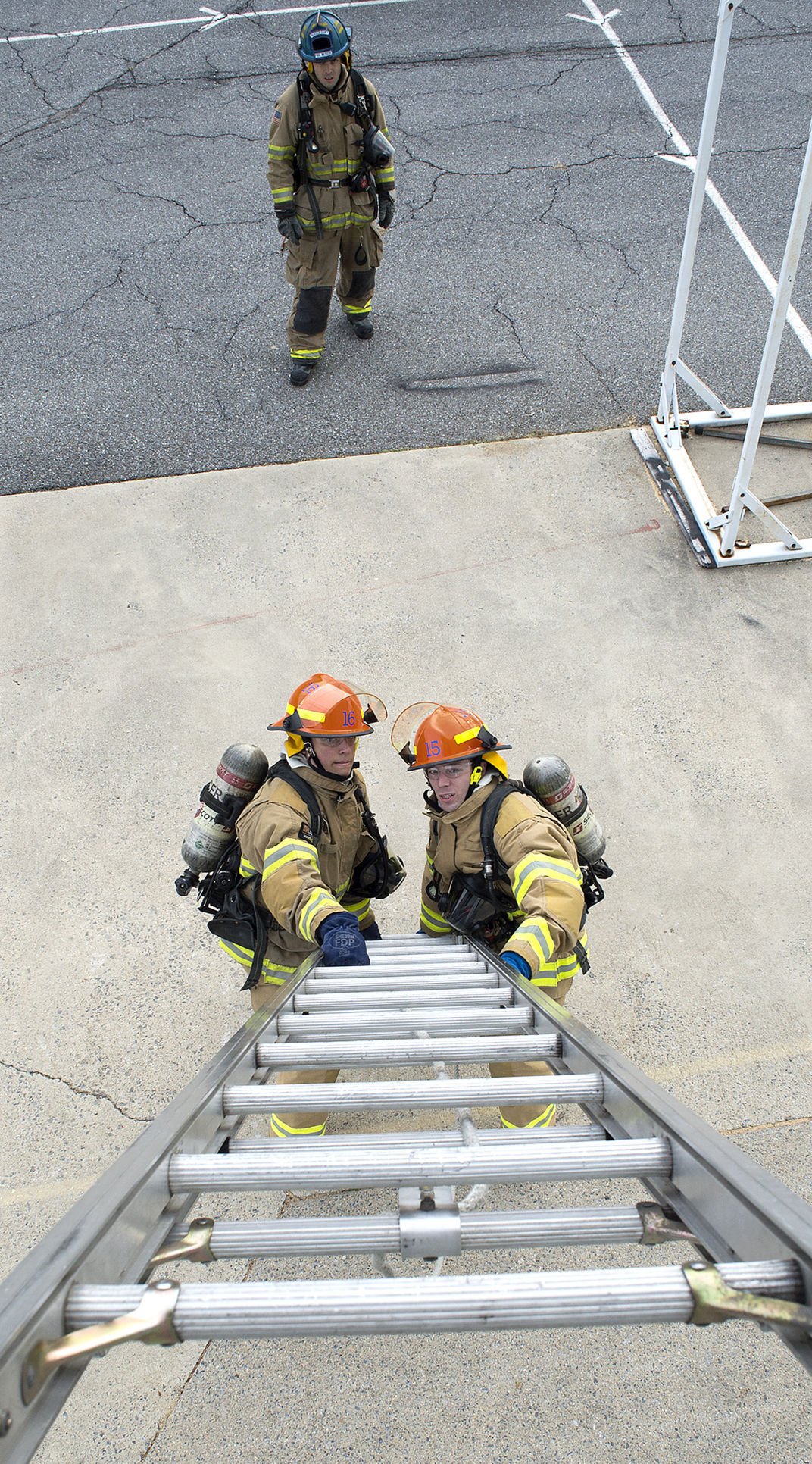 Frederick County Fire Training Academy recruits (at center, from left) Zachary Mellin and John McNemar, lift a ladder under the watchful eye of instructor Lt. Bob McCaa (top), as part of their training exercises on Wednesday.

A recruit of Frederick County Fire Training Academy class 21 learns the proper way to enter a window using a ladder.

Frederick County Fire Training Academy recruits (at center, from left) Zachary Mellin and John McNemar, lift a ladder under the watchful eye of instructor Lt. Bob McCaa (top), as part of their training exercises on Wednesday.

The Frederick News-Post will follow the men and women of Recruit Class 21 as they progress through the six-month firefighting training course at the Frederick County Division of Fire and Rescue Services. Each story in the ongoing series will focus on a different lesson, skill, recruit or subject related to the county’s newest class of firefighters as they strive to answer the call to public service.

Despite outward resemblances to a massive jungle gym, the ladders set up around the burn tower at the county public safety training facility last week were in place to teach prospective firefighters a serious lesson.

“It can be a lot of fun, but at the same time you have to keep your discipline about you,” said 24-year-old Patrick Mangus, one of Recruit Class 21’s aspiring firefighters. “You have to be aware that it might be fun out here, but eventually the goal is to make us all probationary firefighters. There might come a day when we are going into a burning building to help somebody.”

As Mangus was talking, some of his fellow recruits in a separate group were scaling one of the ladders to a second-floor window under the watchful eye of Lt. Bob McCaa, one of the facility’s instructors.

“Reach that left arm in. Hold on to that wall,” McCaa called up as the recruit climbed into the window frame. “Stay low, get your head down low.”

While the knee-jerk reaction of many would-be rescuers might be to scale the ladder as quickly as possible to help anyone trapped inside, the recruits of Class 21 know better thanks to McCaa and Class 21’s full-time instructor, Lt. Mike Webb.

Still straddling the window frame, the recruit swept one leg across the floor immediately inside the window, checking to make sure there were no unconscious victims in harm’s way.

Having determined the way was clear, the firefighter-in-training next hefted his pry bar, using the heavier tool to probe the floor and make sure it could support his weight.

“Just like how you’re taught to crawl when escaping a burning building to avoid the smoke, same concept here,” Webb said, narrating the recruits’ climb. “The weakest piece of their equipment is the lens piece of this faceplate. So keeping their heads low, keeping this faceplate out of the heat to protect it is one of the main reasons we’re teaching them to stay low.”

Just as the recruits are taught to view every lesson as an investment toward their own and others’ survival in a future life-or-death scenario, their instructors also take their roles seriously.

“I have to inject them into a system of almost 400 members, so I need us to all work off the same sheet of music,” Webb said. “So I’m teaching them, basically, how to read that music. So that, when they get out there, they’re not throwing anybody a curveball.”

Even when his recruits have a moment away from the ladders, Webb has them busy tying knots around a metal frame set up next to the burn tower.

While rope work may seem simple enough, everything the recruits do is designed to instill in them a sense of their place in the larger firefighting community in Frederick County. For example, the ropes each recruit is assigned are color-coded to set squad leaders apart from regular recruits and the platoon leader, Webb said.

On the one hand, breaking down the class into squads helps Webb better manage all 24 recruits, but the real-world applications behind assigning different-colored ropes were also evident.

Given the ramifications that mistakes can have in the world of firefighting, instructors like Webb and McCaa can’t easily afford to pass up opportunities to impart wisdom to their classes of newcomers, Webb said.

Thankfully, regardless of their experience with firefighting or different reasons for joining up, most recruits share a motivation to serve and a drive to succeed.

“I really don’t have any fire experience, but it’s something that I’ve wanted to do since I got out of high school,” said Mangus, who volunteered for several months as an EMS provider in Braddock Heights before he joined Recruit Class 21. “So far I don’t feel like I’ve come to a day of work yet. I love what I’m doing, I look forward to every day, and every day makes us stronger.”

I would like to see the chiefs try to meet the same physical requirements that the recruits. Now that would be a story.

Yeah, it would. But, as with any regimental organization, they aren't required to, I guess because they paid their dues and moved "up the ladder." Just like law enforcement officers or those in the military. The young bucks are the ones who have to be in good shape because they do the most physical work.