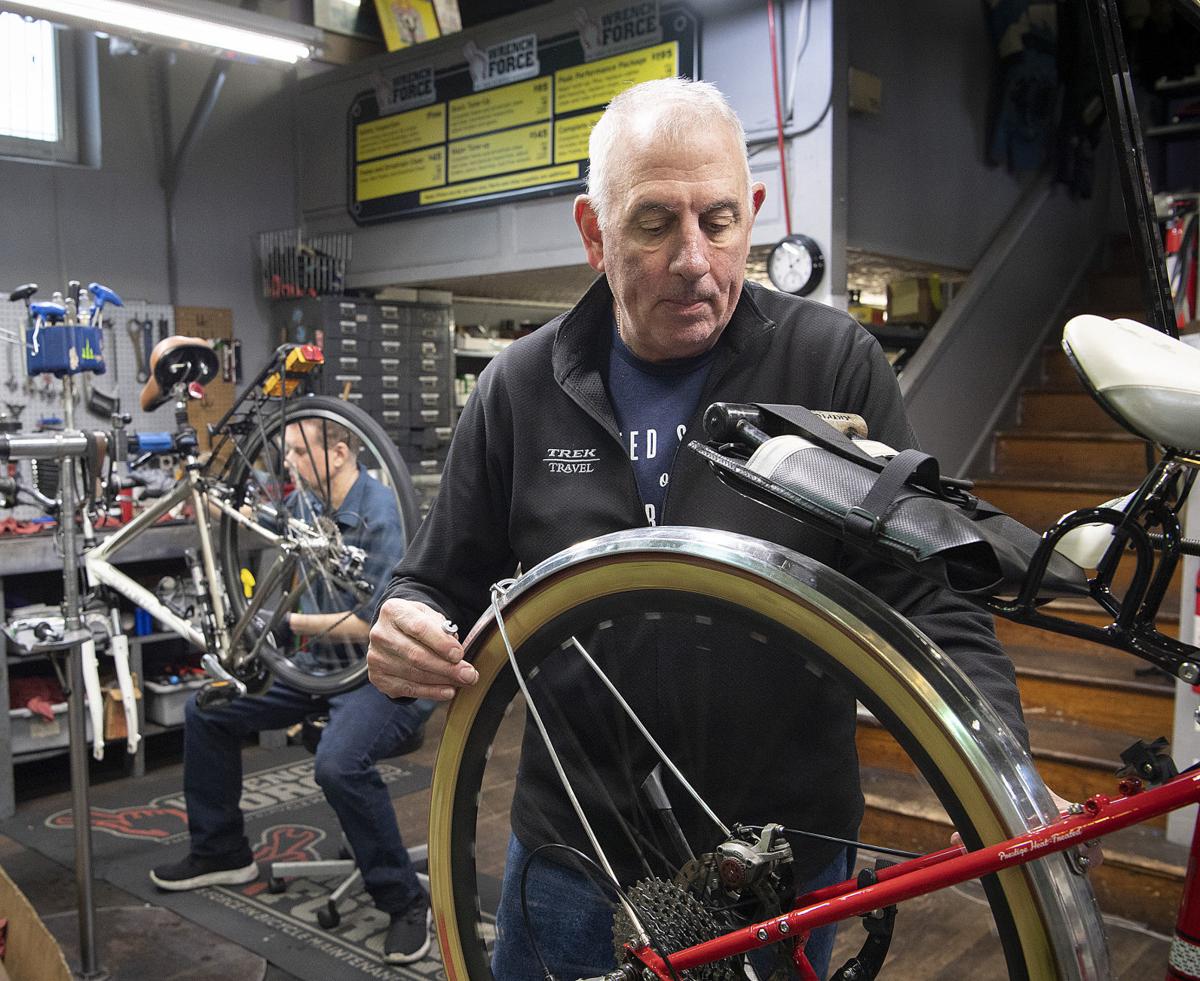 Tom Peperone, who has owned Wheel Base Bikes on North Market Street for 35 years, repairs a bicycle Monday afternoon. Gov. Larry Hogan announced Monday morning that all non-essential businesses in the state must close Monday at 5 p.m. Bicycle shops are exempt from the new order. 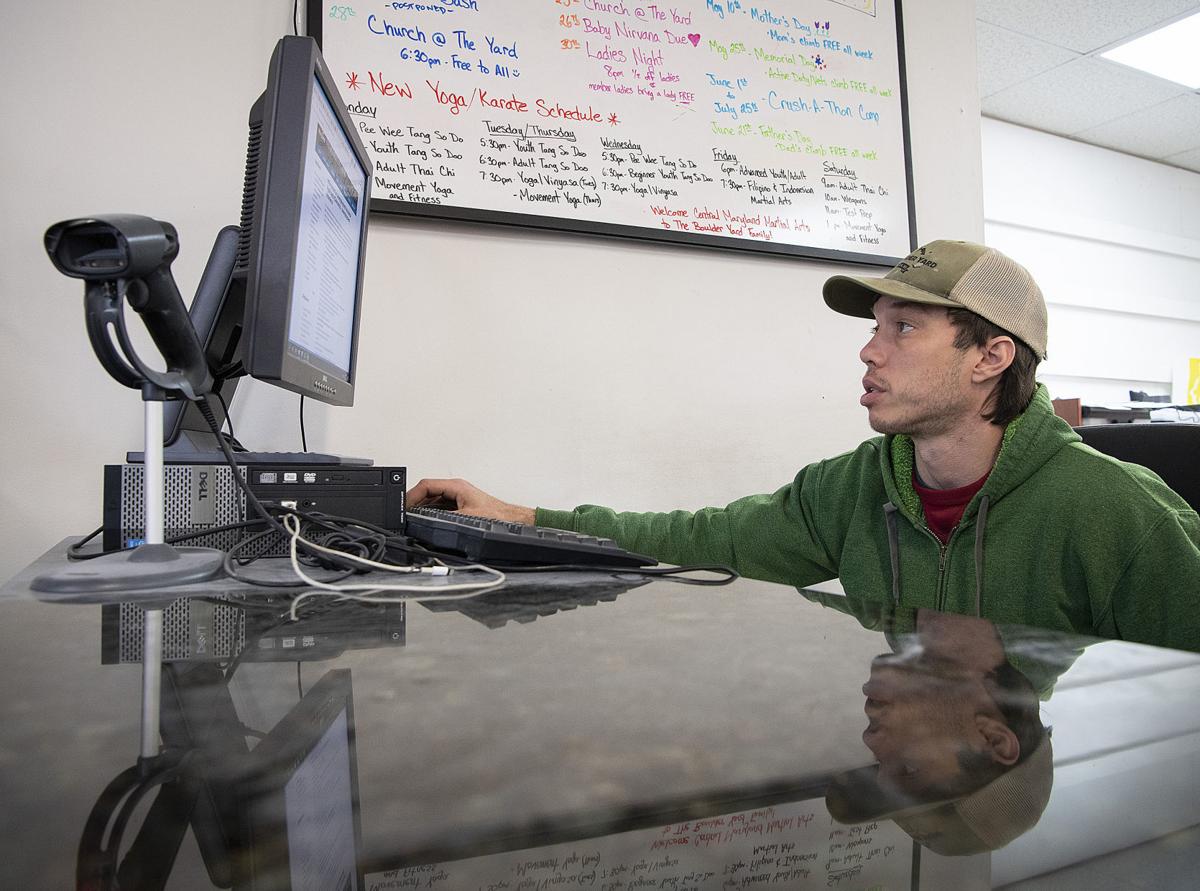 Steve Baranski, owner of the Boulder Yard rock climbing gym south of Frederick, was busy Monday filling out state loan and grant applications during Gov. Larry Hogan’s announcement of financial aid to small businesses closed due to coronavirus regulations. He has been forced to suspend employment of his 19-member staff after closing March 16.

Tom Peperone, who has owned Wheel Base Bikes on North Market Street for 35 years, repairs a bicycle Monday afternoon. Gov. Larry Hogan announced Monday morning that all non-essential businesses in the state must close Monday at 5 p.m. Bicycle shops are exempt from the new order.

Steve Baranski, owner of the Boulder Yard rock climbing gym south of Frederick, was busy Monday filling out state loan and grant applications during Gov. Larry Hogan’s announcement of financial aid to small businesses closed due to coronavirus regulations. He has been forced to suspend employment of his 19-member staff after closing March 16.

Baranski, owner of the Boulder Yard south of Frederick's city limits, recently laid off 19 employees because of the coronavirus, as Gov. Larry Hogan (R) announced earlier this month that all gyms must close to the public.

He wants any assistance he can get, so he can pay his bills: rent, utilities and other costs of owning an indoor rock climbing gym.

And of course, any assistance he can pay his laid-off employees.

Baranski, like several other small-business owners countywide likely will be, was applying for grants through the state's Department of Commerce. Hogan and senior state officials announced Monday that small businesses of 50 employees or less can apply for up to $10,000 in grant money, or up to $50,000 in loans, at a rate of zero percent interest for the first 12 months.

"I’m just glad he [Hogan] opened up something, because the federal one is taking forever," Baranski said of applying for state versus federal assistance.

Initially, some business owners wondered if they would still be allowed to operate as an "essential" business. Hogan announced that all non-essential businesses must close at 5 p.m.

That included Tom Rinker and Tom Peperone, who own The Bicycle Escape and Wheel Base Bikes, respectively, in Frederick.

Both argued that because some people use bicycles to get around, and because they are now a way for people to exercise amid all gyms shutting down, that bike shops should be considered essential.

They added they were taking precautions to stop the spread of the coronavirus: practicing social distancing, limiting the number of people in the shop and sanitizing counters and high-traffic areas.

"I just feel very strongly we are a very important part of the community in terms of getting people to go to work and [parents] taking the kids for a bike ride," Peperone said. "There are a lot of people that depend on us."

Mike Ricci, a spokesman for the governor, said in an email Monday that bike shops were exempt from Hogan's executive order.

Both Rinker and Peperone said they've been busy the past few weeks, but Rinker added he would investigate the loan and grant opportunities Monday evening, should business slow down or if further restrictions are imposed.

"Survival is the name of the game right now," Rinker said.

For restaurants, however, carryout and delivery are their only current modes of income, as Hogan ordered them and bars to halt dine-in service.

That has led to layoffs and a need for the aforementioned grant and loan money for many businesses.

Aaron Neider, general manager of the Tasting Room in Frederick, said it has been "chaotic" at work as he and his colleagues have changed the restaurant's business model due to the coronavirus.

That includes a pop-up meat market, and selling wine and handcrafted cocktails to go, Neider said. The restaurant's accountant is reviewing the loan and grant opportunities, he added.

"Any money is good. … We’re just living say to day, we don’t know what to expect as this continues to play out, it’s just uncharted territory," Neider said.

Abed Alkteifan, owner of Potomac Street Grill in Brunswick, said despite some layoffs recently, he's been able to stay afloat through carryout and delivery service.

But the longer he's closed for dine-in service, the more difficult that will become, he said — and those grant and loan opportunities will be more important.

Some upcounty restaurants are in the same predicament. That includes Thurmont Kountry Kitchen.

Sherry Myers, owner of the restaurant, said she's laid off about 17 people of about a 23-person staff to stay afloat. She thanked the community for its support in the past few weeks, as the eatery has provided delivery and carryout service.

"We'll probably look into both options. … Probably more of the grant, just needing that little bump to get through this," Myers said of the loan or grant opportunities offered by the state. "Within a few months, hopefully, everything will be back to normal."

Right up U.S. 15 in Emmitsburg, Susan Glass, co-owner of Ott House, has also had to lay off staff because of the coronavirus.

Glass said she saw some of Hogan's announcement, but would review the loan and grant opportunities further.

There are costs even with a downsized staff, she said: keeping the lights on, gas for the grills and food — even with a limited menu.

Like Myers, she thanked the community for its support in the past few weeks.

"We’re not panicked at this point. I think we’re going to look at all options to keep ourselves afloat and be able to open back up," Glass said.

Depending on how long restaurants are closed, however, it could put a damper on a notable anniversary, she added.

"In June, we'll be open for 50 years, so we kind of put the hold on that celebration," Glass said with a laugh.

It's obvious that the Frederick News post condones liberal commenters calling out fellow commenters by name and mocking them because of their religion.

Dr. Fauci told WMAL on Tuesday that Trump has always heeded his recommendations.

“The president has listened to what I have said and to what the other people on the task force have said, when I have made recommendations he has taken them. He’s never countered or overridden me, the idea of just pitting one against the other is just not helpful,” Fauci said.

“I would love to have the country opened up and just raring to go by Easter". Meaning he is HOPING the Country will be open. Not IT WILL BE open.

Concerning ending the 15 - day effort to curtail the public's activities, that we are approximately half way through :

We’ll assess at that time and we’ll give it some more time if we need a little more time, but we need to open this country up,” he added. “We have to go back to work, much sooner than later.

Republicans, as usual, are lining up behind (and I do mean 'behind') the Dotard, which cannot understand why the virus does not obey its will, to lift all restrictions and maximize the spread of the virus. Just like 1918.

He is gonna hurt a lot of people.

Guess the right wingers don't like my replies so they keep reporting/deleting. Trump IS going to hurt many, many people. He wants to expand the economy again prematurely. Hong Kong tried that and now they have a resurgence. It was just found the virus stayed in those cruise ships over 2 weeks in cabins and on surfaces. T-man wants us to go about our business by Easter. Why? Because he has a financial interest in this, with his hotels and other properties as well as stocks. This isn't about us, it's about him. Trump is the one that will be hurting us all.

Fox News is guilty too

I agree collinsm65, all these deletions are not being done by the FNP. Somebody is deleting the never-trumpers truths, as well as their own if their comments draw too much derision. They get so angry if the DJ Trump lies and bizarre statements and actions get too much flack from the “Libs” here. They actually believe everything that he says??? On Easter morning, all the BunnyLou’s by the thousands will gather on the South Lawn to cheer the resurrection of the Economy and the DJIA. I know, I know, I’m going to get struck by a bolt of lightning. I’ll apologize when I get to the Pearly Gates. 👼

How in the world do participants here delete posts phy? Hint: they can't. They're deleted by the moderator. If the mod doesn't like your post...gone. If the mod disagrees with someone reporting it...it stays. It's all at the discretion of the mod.

Hopefully the states will say no and continue their programs.