A federal judge in Baltimore is considering a request by Gov. Larry Hogan and other state officials to dismiss a lawsuit that claims the governor’s executive orders were overreaching of Maryland and the United States’ constitutions.

Frosh and others argued in their motion that the state’s “paramount interest” in protecting lives during the coronavirus pandemic justifies Hogan’s executive orders. 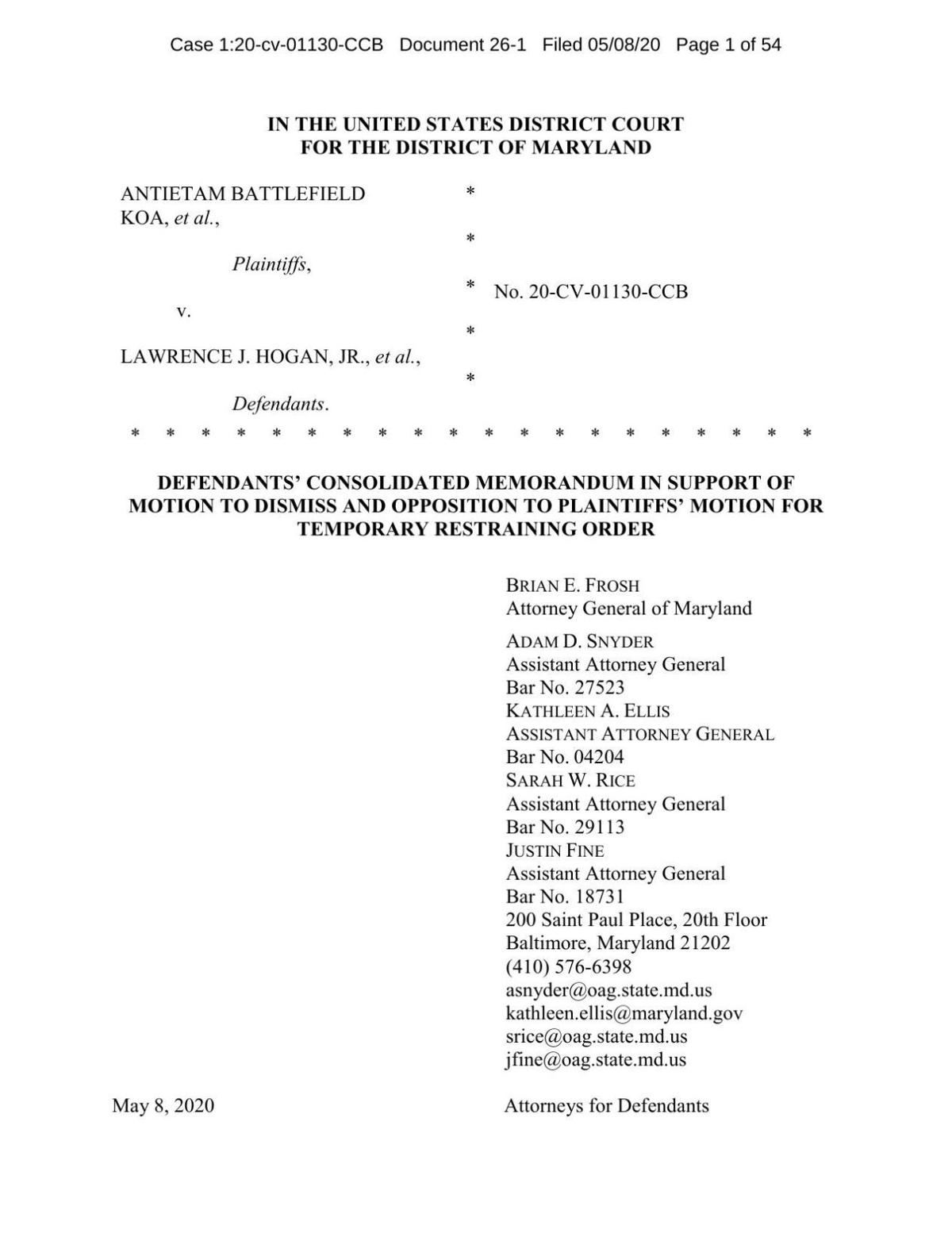 “Theirs is not a targeted complaint, seeking to adjust one aspect of the Governor’s emergency orders,” Frosh and others wrote. “It is instead a wholesale denial of every aspect of those orders, the emergency proclamation on which they are based, and even the factual premise that the COVID-19 pandemic presents a significant risk to Maryland public health ... If ever there were a case asking a federal court to usurp a State’s emergency powers, this is it.”

Cox and others also argued in the initial lawsuit that the delegate’s First Amendment rights were violated because he was unable to attend a protest against the governor’s orders at Francis Scott Key Mall in Frederick earlier this month.

Frosh and others argued in their 54-page motion to dismiss that there were several alternatives for to protest the orders.

“To the extent the Order incidentally burdens speech, it seeks to minimize those burdens through interpretive guidance, enforcement protocols, and a published plan for lifting the restrictions as soon as publicly available metrics are achieved that demonstrate a decreased risk of transmission,” the motion reads.

Cox said in a statement on Facebook Saturday he disagreed with Frosh’s motion.

“It should be clear to all Marylanders, who are also Americans with due process rights, that the Governor in his response believes he has total governmental power during any time he deems an emergency, without checks and balances from the [state] Legislature or the Courts,” Cox wrote.

“He actually believes his authority alone can decide when we leave our homes, feed and educate our children, obtain healthcare, work in business or worship God the way we see fit,” he added.

Cox wrote he is working with a “growing legal team” and will soon file a response to Frosh’s motion to dismiss.

This story has been updated.

A version of this story that was published online Saturday inaccurately reported that U.S. District Judge Catherine Blake dismissed Del. Dan Cox and others’ lawsuit. Blake hasn’t yet ruled on the matter.

A federal judge struck down a lawsuit from Del. Dan Cox and several others Wednesday which sought to challenge the stay-at-home order and regu…

So, apparently Del. Dan Cox is a real threat to the health, safety and well-being of Maryland. Politics aside, he's using this pandemic for his personal political gain ... not for the welfare of his constituents. The news media AND voters have proved it. Your political time is short-lived, Cox.

Yes, comrade, we must support our leader, or we will be fired.

You want some news one day early?

Motion to dismiss will be granted tomorrow morning. In one sentence. The federal judge is not considering anything. She made up her mind Friday, and then the weekend got in the way.

What happended to the motion to dismiss paperwork I saw posted earlier this morning by the FNP?

It will be dismissed as you say. The complaint is not only frivolous, it has the wrong names and state mentioned LOL

WHAT A QUACK THAT COX IS!

It doesn't have the wrong names mentioned. once again Kelly, once again........

The complaint that the FNP posted last we does in fact have wrong names. Have a great day.

On the weekend of V-Day we celebrate the sacrifice and patriotism of the greatest generation 75 years ago. In comparison, it seems like such a little sacrifice, and even patriotic to follow the state guidelines for the betterment of all. Fortunately the far majority of citizens have followed the guidelines.

Dan finds himself down a long narrow hallway and someone turned off the lights. He’s lost, all alone in a dark narrow tube. He’s trying to blindly feel his way out while the hallway is getting longer, narrower and turning into a maze. I wish him luck 😉.

C’mon people! Cox is not going through all of this for some altruistic purpose. He’s angling for higher office, trying to just get his name out there, even if it’s for a BS purpose.

He knows this case has no chance. There is already state a federal precedent.

It’s all about him. That’s it.

54 page motion and one sentence denial of claim/motion by judge. I heard a mike drop.

Yep, he and all his constituents won that one. A+ for effort? F for common sense.

He is also still chasing Siegfried and Roy, under the assumption landing half this team to his team is better than adding neither.

Scholastic just called. They want their scissors and Elmer's glue back from last week's cut-and-paste job.

"Frosh and others argued in their 54-page motion to dismiss that there were several alternatives for to protest the orders." It was given more attention than it deserved. Let it go.

Let Cox risk his life. Who cares. The rest of us can abide by Hogan's mandate.

"It should be clear to all Marylanders, who are also Americans with due process rights, that the Governor in his response believes he has total governmental power during any time he deems an emergency, without checks and balances from the [state] Legislature or the Courts," Cox wrote.

Just a reminder to Dan Cox: Your are a MARYLAND STATE LEGISLATOR!!! You are a member of the institution that is responsible for the "checks and balances" of the Governor's office. If you you think Governor Hogan's orders are overreaching, then DO YOUR JOB and request a vote in the Legislature to overturn his order. Or have you already done that and been told what an idiot you are?

Do you think Cox needs to be told he is an idiot. Never mind, we know the answer.

He’s following in trumps shoes. Trump doesn’t believe in checks and balances and thinks he is his almighty!

Cox should resign. He is a total embarrassment to himself and everyone who lives in his district.

No kidding. Cox is complaining about not having "checks and balances" when he is one of the State Legislators who is responsible for that job.

If Del. Cox wanted to grandstand, I hear the one at the Frederick Fairgrounds is available and would cost less taxpayers dollars. Money might grow on trees in D.C., but not here.