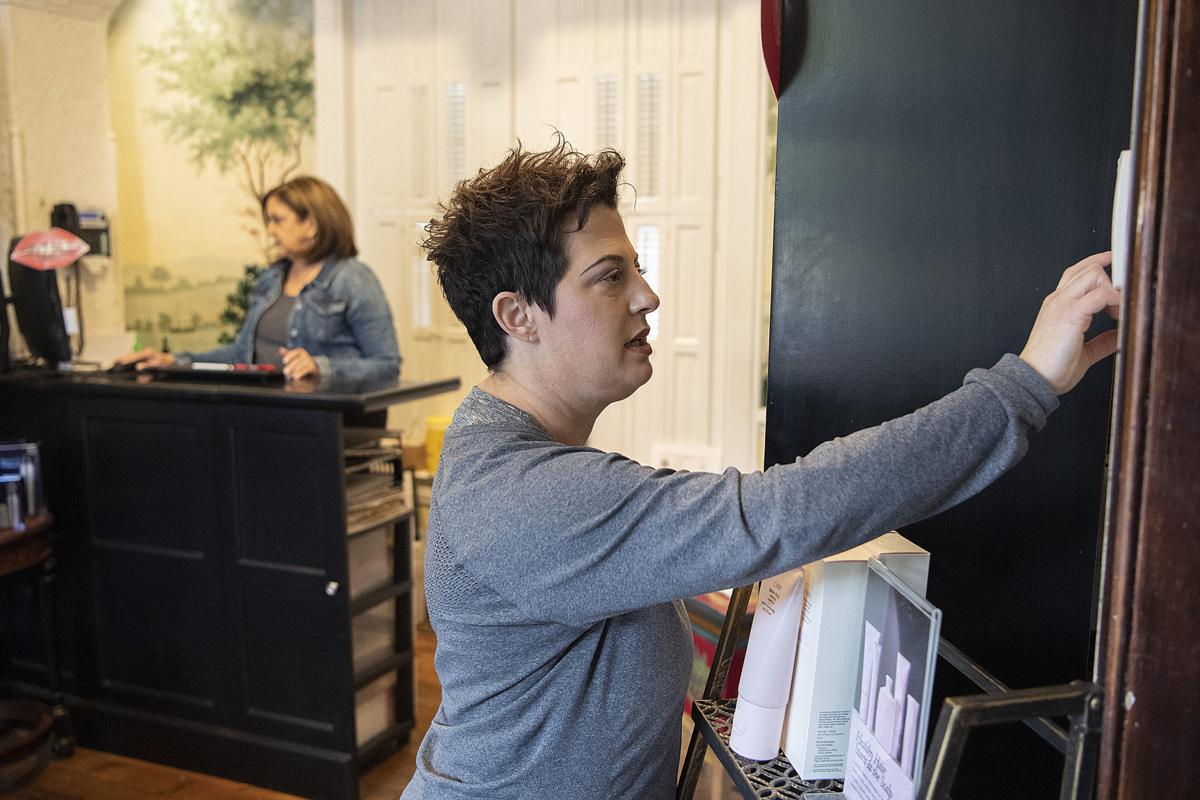 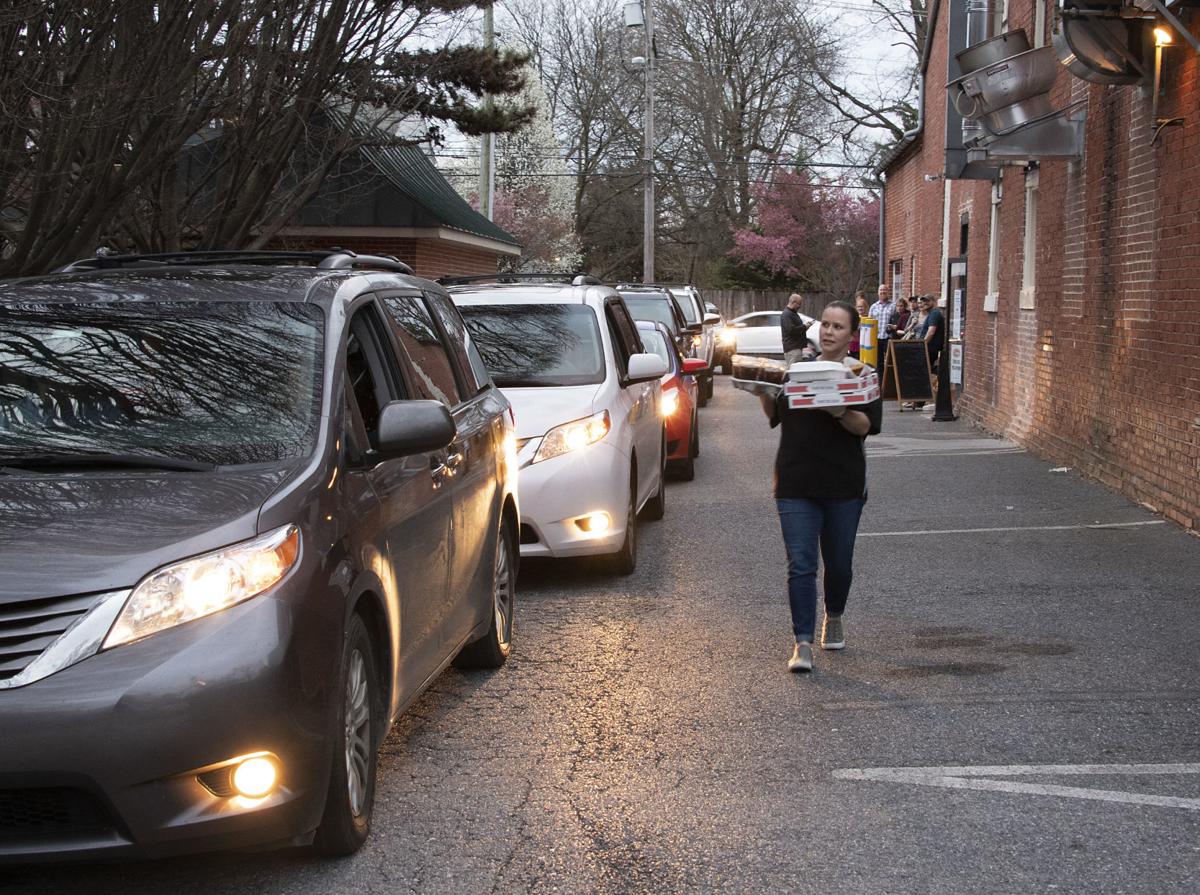 Jaime Ellis-Ade of Pistarro’s carries a load of food Friday evening to waiting cars that spilled out onto North East Street in Frederick. Ellis-Abe said the restaurant has been very busy with take-out orders between 5 p.m. and 7 p.m.

Jaime Ellis-Ade of Pistarro’s carries a load of food Friday evening to waiting cars that spilled out onto North East Street in Frederick. Ellis-Abe said the restaurant has been very busy with take-out orders between 5 p.m. and 7 p.m.

While Gov. Larry Hogan has ordered all restaurants, bars and gyms to close — except restaurants with takeout and delivery — service-based businesses such as salons and dentist’s offices have been faced with making their own decision about whether to stay open.

For Judy Cicala, owner of Six East Hair Salon and Spa, she said that she decided to follow the suggestions to self-isolate as much as possible, and in order for her and her employees to do so, they would have to shut the business down.

Since the stylists come into close contact with people every day, it didn’t seem safe to Cicala. The salon will be closed until March 31, but she said that she will reassess the opening date as time progresses.

Other businesses have decided to remain open, such as The Affiliated Barbershop on North Market Street.

Marcello Dove said he was the only barber in the shop on Thursday. The rest had stayed home because they were concerned about the coronavirus.

When asked why he still went in, he said, “I still gotta pay bills.”

Each barber at The Affiliated is an independent contractor, so they don’t have any paid time off. Dove hopes that there will be some sort of government assistance in the future.

“I just wish they had more stuff for barbers to be covered in times like this,” Dove said.

Paying employees is a major concern for Dr. Jeffrey Cross, who owns his own dental practice on Solarex Court, which he decided to close earlier this week. The dentist said that all of his six employees are paid hourly, and he isn’t sure what options are available in order to make sure they are paid while the office is closed.

“I want to pay my staff, but what am I going to pay them with? ... There’s essentially no money coming in and only expenses going out,” Cross said.

He closed due to concerns over the virus spreading, knowing that dentists are well within the 6-foot distance that the government has advised people to keep between themselves and others.

“The virus is transmitted via saliva, and what are we working in all the time?” Cross said. “We have a much higher risk factor than other professions.”

Right now the office is scheduled to reopen April 6, but Thorpe said the opening date will be reassessed.

Cross said small businesses are in dire need of assistance from the government, which has so far offered relief to large companies such as airlines.

“It’s small businesses that need the money the most,” he said. “It’s foolish to throw money into large corporations that have had the opportunity [to help their employees] especially with the passage of the very generous tax bill a couple of years ago, these corporations have a lot of cash.”

The concern over monthly payments is forcing some businesses to make the difficult decision to stay open, such as Spring Ridge Barbershop in Lake Linganore. Owner Tony Santini said that business has slowed down substantially since Hogan closed all schools March 13.

“It would be tough [to close] because I’d have to keep up with my monthly expenses even though there’s no income,” Santini said.

He also said that the uncertainty about how long the business could be closed for is unsettling. Many of the business operators said they hope to be open sooner rather than later, but understand if the shutdown required is longer.

“I hope things can be opened as soon as they can be open,” Thorpe said.

There are way to many that think this is just a two week epidemic. It will be a surprise if it gets very good in less than six weeks.

Before we throw billions at small businesses, we need to see their books and review their tax returns, portfolios, overseas accounts. It's only prudent. Government normally qualifies businesses through audits and reviews before contracting with them. It does not just throw money at them because they ask for it.

I think you are thinking of Large Corporations, most small businesses struggle to even pay their employees.

So they would have you believe. I'm from Missouri so I say show me.

Then you've never worked in the private sector.

They are if they want public money.

So before you accept that hand out, let's see your tax returns.

Only if the public money is a hand-out or investment. I see it as restitution. Restitution implies culpability, and the government is culpable for overstepping traditional authority and wrecking tens of millions of lives over an illness with a 1.25% mortality rate. We now have 33276 data points - confirmed infections. Of those, only 417 died. If you catch this disease you have a 98.75% chance of survival in this country. I don't care what the mortality rate is in other countries because this country is awesome compared to all others. So yes, the government owes some reparations to small businesses for their irresponsible curtailment of freedom and destruction of the free market.

Just stop. If they filled tax returns the last year or so, you have everything you need. Your comments in this space are only divisive and ill thought out.

Because a dentist isn't critical. Get real. Your hair and personal vanity can wait.

a person cutting hair isn't facing the customer for the most part.

Lev probably has all of two teeth, D.