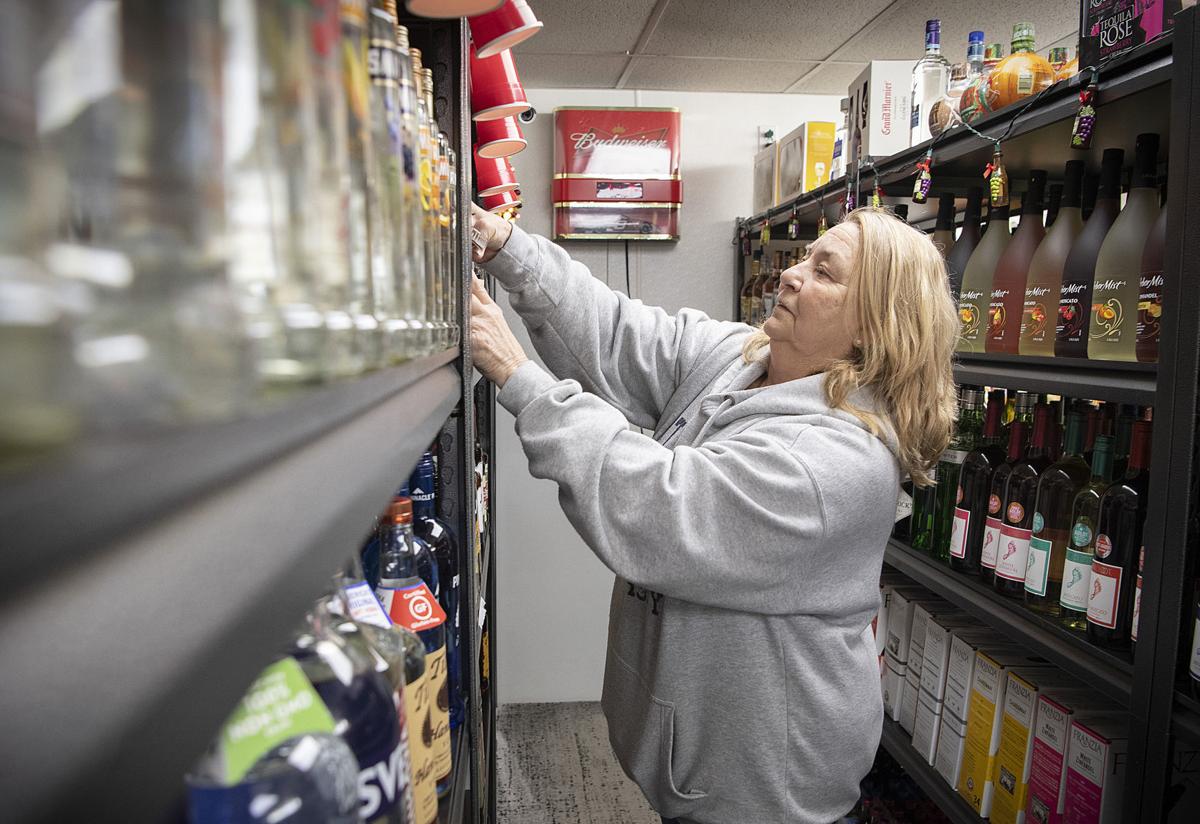 Cotton Rudy, co-owner of Rudy's Welding Service and Cold Beer in Middletown, restocks shelves in the store Saturday afternoon. She reports a 50 percent increase in sales in the last week. 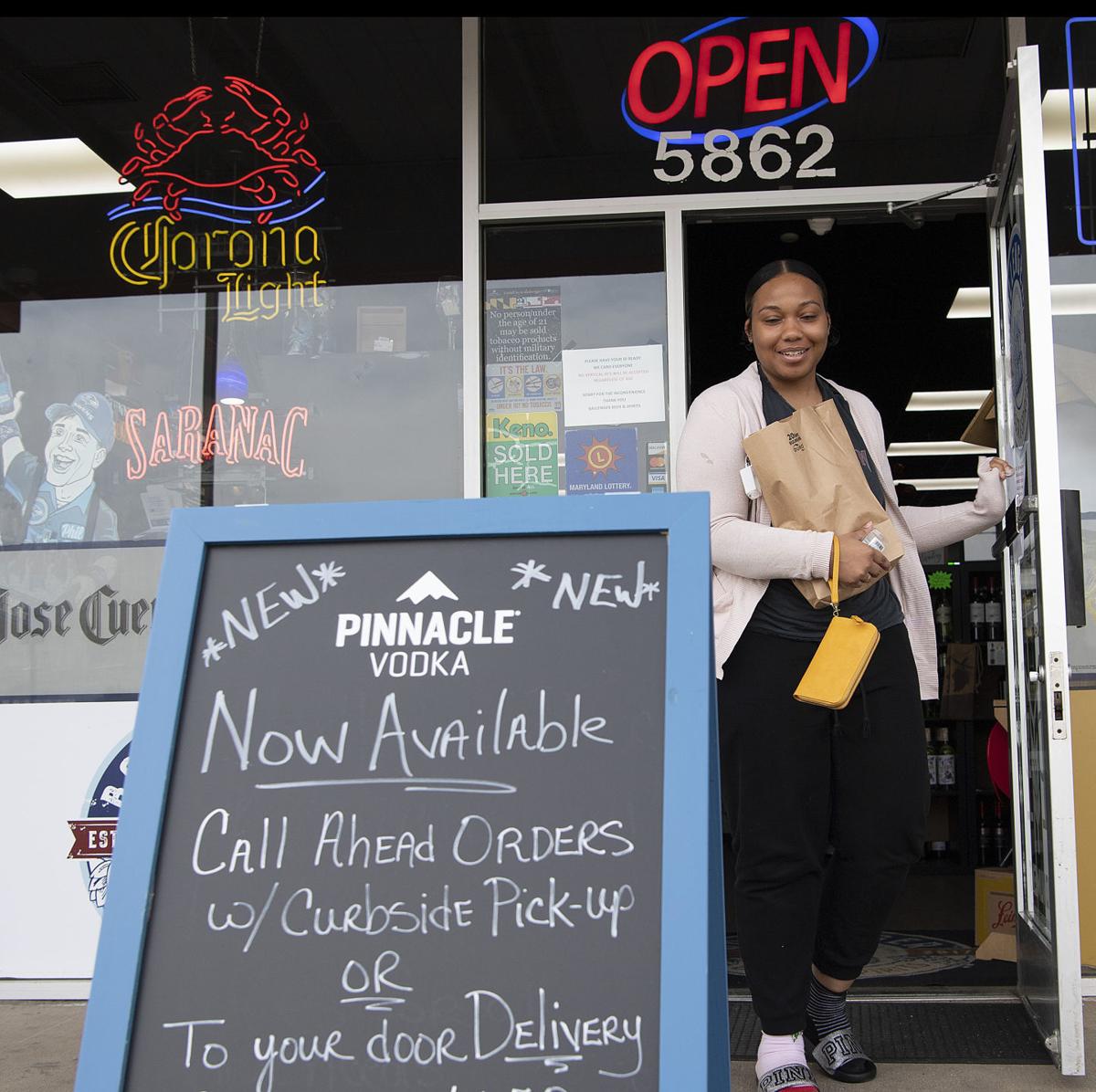 Caya Ambush leaves the Ballenger Beer and Spirits shop on Ballenger Creek Pike Sunday afternoon with her stock of spirits. Most county liquor stores had seen a substantial increase in business in the past week. This shop offers curbside pickup and delivery for orders over $15.

Cotton Rudy, co-owner of Rudy's Welding Service and Cold Beer in Middletown, restocks shelves in the store Saturday afternoon. She reports a 50 percent increase in sales in the last week.

Caya Ambush leaves the Ballenger Beer and Spirits shop on Ballenger Creek Pike Sunday afternoon with her stock of spirits. Most county liquor stores had seen a substantial increase in business in the past week. This shop offers curbside pickup and delivery for orders over $15.

As the coronavirus outbreak has caused an economic hardship across Maryland as many small businesses have been ordered to close their doors, one particular type of business has thrived: liquor stores.

Zacharias and managers at other liquor stores countywide said they have seen a recent uptick in sales, as people rush to those establishments during a global health pandemic — and are advised by public health officials to spend most of their time isolated in their homes.

Zacharias said business is triple what it usually is this time of year, and many customers have said they want to stockpile beer and liquor before her and other liquor stores might be shut down due to the coronavirus outbreak.

Tom Wolf, governor of the neighboring state of Pennsylvania, ordered liquor stores to close statewide earlier this week due to the coronavirus.

“People are coming in and stocking up because they think it’s going to happen here,” Zacharias said.

That sentiment was shared by Cotton Rudy, co-owner of Rudy’s Welding Service and Cold Beer in Middletown.

Business has been up around 50 percent compared with what is usual seen around this time of year, Rudy said. Customers are constantly asking if they are going to close due to the coronavirus, she said.

And a certain item has been a hot commodity, she said.

“I think because of the coronavirus, we ran out of Everclear alcohol, because people have been using it as hand sanitizer,” Rudy said, who added she was hopefully getting another shipment late this week.

Pradeep Saini, owner of Brunswick Liquors, said business doubled around that time. He added that he is taking precautions amid the outbreak — employees are wearing gloves, and hand sanitizer is kept in high-traffic areas.

A.J. Spellmon, who works at Spirit of Liberty near Libertytown, also said it’s been a busy time for him and colleagues the past two weeks.

Business has doubled in roughly the last week, he said. Many customers are stockpiling, something he typically sees only during the holiday season.

“Even people that don’t drink normally, or just drink during the holidays are like, well ... if we’re stuck at home for a long period of time, then we might as well have it,” Spellmon said.

There’s one specific personal challenge when people flood the store, he added.

“There’s a constant line of customers, and it’s hard to go to the bathroom,” he said.

Liquor stores countywide now have the ability to offer curbside pickup and delivery of alcohol, as long as they adhere to local liquor laws, Hogan announced earlier this week.

Some, including Zacharias, are looking to expand that, depending on what the local liquor board will allow.

But for now, business is strong for her and others countywide. That includes Orion Wine and Spirits in Urbana.

Shalen Maffre, manager of that store, said he had a record high day in sales Monday — roughly eight to nine times what he typically brings in on that day of the week.

People are seeing the need to stock up before his and other stores might be shut down, he said.

“A lot of people are sort of uncertain and they’re looking to stock up just in case. ... Better to have booze now more than anything, I guess,” Maffre said with a laugh.

Have you purchased more alcohol than usual over the past few weeks?

People are buying guns galore too. Guns and booze. What could go wrong? Maga!!

What does this article say? I'm too drunk to read this [tongue_smile]

Ship as much booze to congress as possible. They can be best buddies and pass the bill tonight and the have the walk of shame tomorrow morning.

Greedy America capitalists were just given a 2 trillion dollar tax relief a couple years. You’d think these brilliant people would have put some away for a rainy day, but instead these greedy people brought their own stocks and artificially manipulated their portfolios. Now they’re begging Congress for another opportunity to artificially hike their wealth at the expense of the deficit. I say nationalize every corporation that’s begging for a bailout and then sell it back at market rate.

Republicans are running the Senate, so expect to line the greedy capitalists yet again. Georgie Boosh lined them in 2007, too.

Meanwhile Congress working in financial relief to include sending $1000-$2000 checks to families in need. Hopefully it will be spent as intended.

It is intended to be spent. On what is irrelevant.

The Federal Bureau of Investigation's New York office recently sent out an alert to local authorities warning of extremist groups it said are encouraging their members to spread the novel coronavirus to police and Jewish people, ABC News reported.

According to the news agency, the alert, which was reportedly issued on Thursday, said that "members of extremist groups are encouraging one another to spread the virus, if contracted, through bodily fluids and personal interactions."

The alert reportedly warned that the racist groups were urging their members to go to places where Jewish people "may be congregated, to include markets, political offices, businesses and places of worship."

I read that too. The extremist groups you write of are white supremacists. They plan to get infected, then attack Jews and Blacks with spray bottles they have spit in, going through Jewish and Black neighborhoods spitting on doorknobs and elevator buttons, etc. They speak of spreading "coronavirus germs" in nonwhite neighborhoods. Seems like kamakazi attacks to me.

aND A BOOM IN DOMESTIC ABUSE (sorry) calls now and births 9 months from now. There is a thin line indeed, and booze makes it thinner!

as do morons with small brains and guns in the house.

Indeed. I think it leads to many ill-considered suicides.

Not to mention domestic abuse and murder/suicide.

No, the Dotard's supporters are not to blame. The Democrats are. It's all a hoax. Nobody is sick and nobody has died.