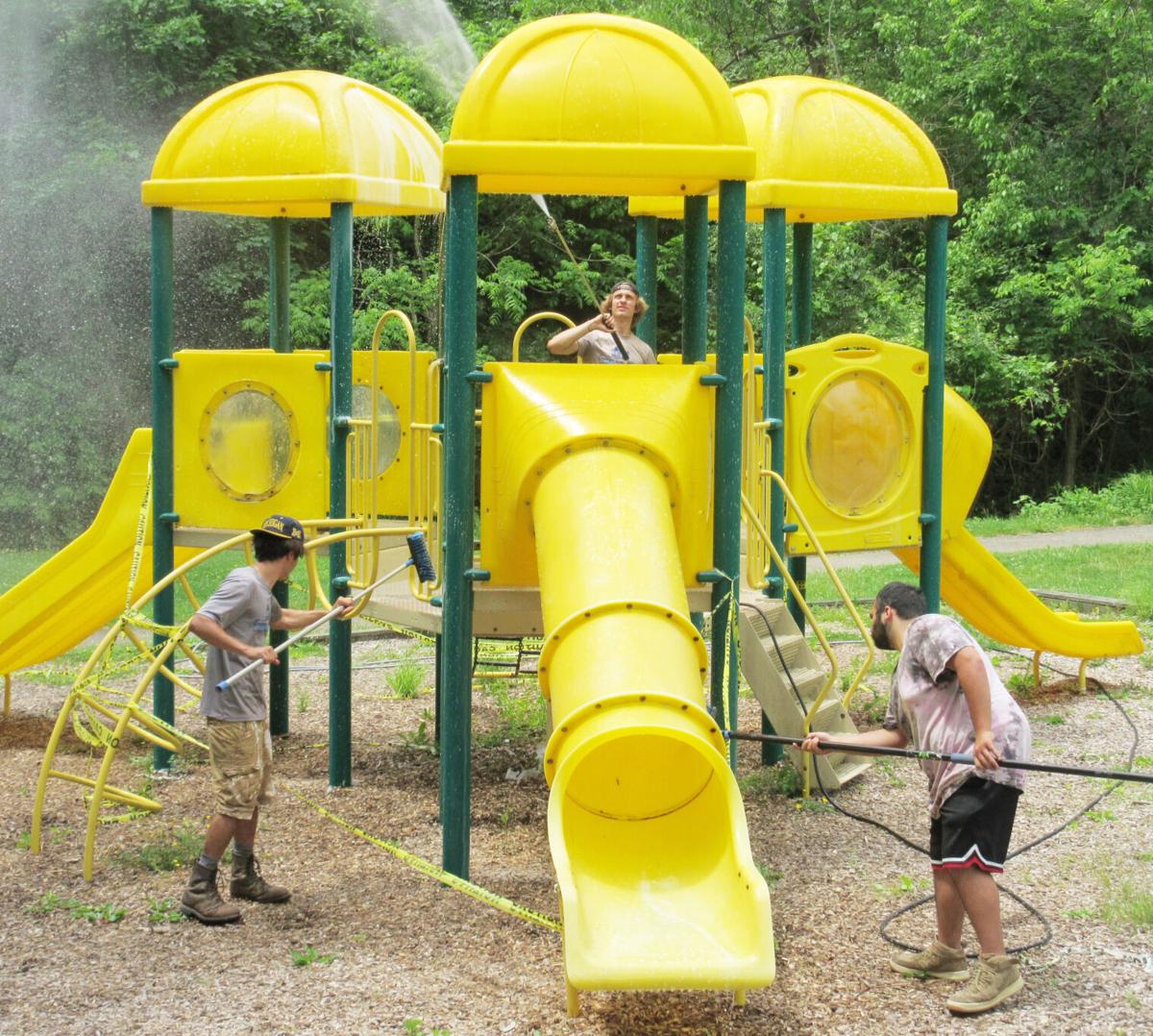 From left, Giovanni Bazzano, Vinnie Lavorgna and Julio Prestia, of Premier Power Cleaning in Canonsburg, clean a playground at Canonsburg Town Park in preparation of the park’s reopening. 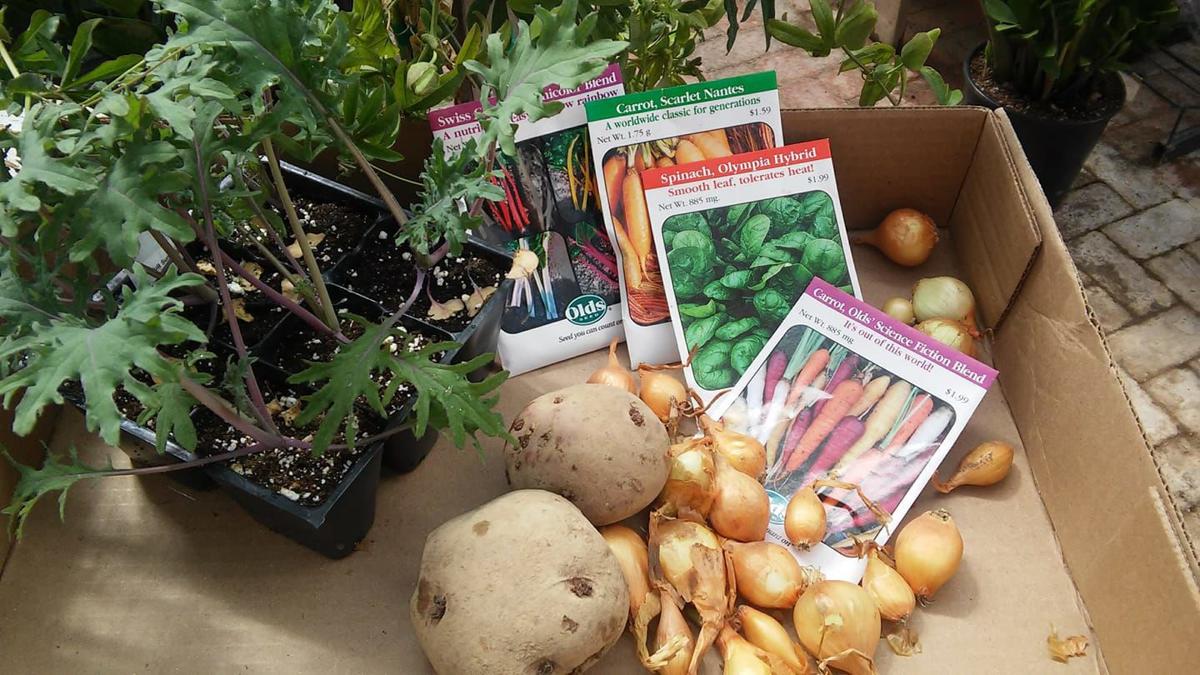 The Natural Art Garden Center in Toms Brook, Virginia, has been selling a lot of vegetable plants since the pandemic began.

From left, Giovanni Bazzano, Vinnie Lavorgna and Julio Prestia, of Premier Power Cleaning in Canonsburg, clean a playground at Canonsburg Town Park in preparation of the park’s reopening.

The Natural Art Garden Center in Toms Brook, Virginia, has been selling a lot of vegetable plants since the pandemic began.

It’s Vinnie Lavorgna’s third year running his Premier Power Cleaning and Landscaping business in Canonsburg, Pennsylvania. He hadn’t expected a pandemic or the 75 percent increase in business he’d received in the last few months because of it.

“It’s a lot because we’re a small business, so 75 percent is game-changing for us,” Lavorgna said.

Since the pandemic started and people have been staying home, homeowners have been taking on projects like landscaping, deckbuilding, or other home renovations. Hardware stores and other businesses that sell materials or offer services in those areas have actually done better than projected in the last few months.

“We’ve actually been doing better since the pandemic, just because we switched to helping the community out,” Lavorgna said.

His company does cleaning and sanitization, mostly for houses, but in the last few months, he’s offered discounts to schools and has taken on jobs sanitizing parks and pools. As an example, he sanitized playground equipment at the Canonsburg Town Park for free, as a service to the community.

Lavorgna said he has also been working a lot with homeowners associations that have parks or playgrounds that needed to be cleaned during the pandemic.

Sometimes the jobs come in as a domino effect — a neighbor will see them cleaning and want them to do their property next.

“On every job so far this year, we’ve had a neighbor stop us to ask if we can help them out,” Lavorgna said.

He wants to start offering sanitization services for commercial dumpster cleaning, which could be in high demand as restaurants start opening up again.

Right now, though, his landscaping business is very busy, and it had to add another truck to its fleet.

“We had to hire two new people just to keep up with the landscaping work,” Lavorgna said. “We took on about 40 new accounts for landscaping.”

Other building material supply companies like 84 Lumber have seen an uptick in people requesting quotes for projects as well. 84 Lumber, which is headquartered in Washington County, Pa., with stores across 30 states, was deemed an essential business during the pandemic, according to the company’s public relations manager, Sara Mellema.

“Over the last few months, we’ve seen a major uptick in homeowners and DIYers reaching out for help on new projects,” Mellema said in an email. “A lot of people have been using their time at home to build sheds, decks, pergolas and playsets.”

“I would say these are the projects most homeowners are looking at during the pandemic,” Mellema said in the email.

Another popular project is gardening, according to Lynne Phillips, manager of the Natural Art Garden Center in Toms Brook, Virginia.

“We’ve been busy selling lots of vegetables and lots of soil to build vegetable gardens,” she said.

In March, when grocery shelves started to empty out and people were panic-buying, Phillips said people were coming to her for vegetables.

“We were selling cucumbers in March, which is the weirdest thing because we usually don’t start selling cucumbers until May,” she said. “People were buying tomatoes just so they could have them. I think they were worried they wouldn’t be able to get them. The general public was seeing that the supply chain was affected.”

Phillips tried to warn customers that it was too early to plant many of the vegetables they were buying. She said she advised them to wait until Mother’s Day, as that’s typically around the last frost.

“Sure enough, we had a killing frost,” Phillips said. “It got really cold Mother’s Day weekend.”

Other customers were starting gardens to provide something for them and their children to do while staying home.

“Another part of it is they needed something to do, and gardening is a very therapeutic thing to do and gets you outside,” Phillips said. “It helps improve your mental state.”

During April and May, people would send Phillips gardening questions and she’d post videos on Facebook to answer them. In the videos, she’d teach people how to plant different vegetables and how to build raised beds.

“I think that this is something that will stay with them because people won’t want to feel that helplessness of going to the store and not being able to find the food they want,” Phillips said. “If planting four tomato plants helps with having that security, I think they’ll stick to it.”