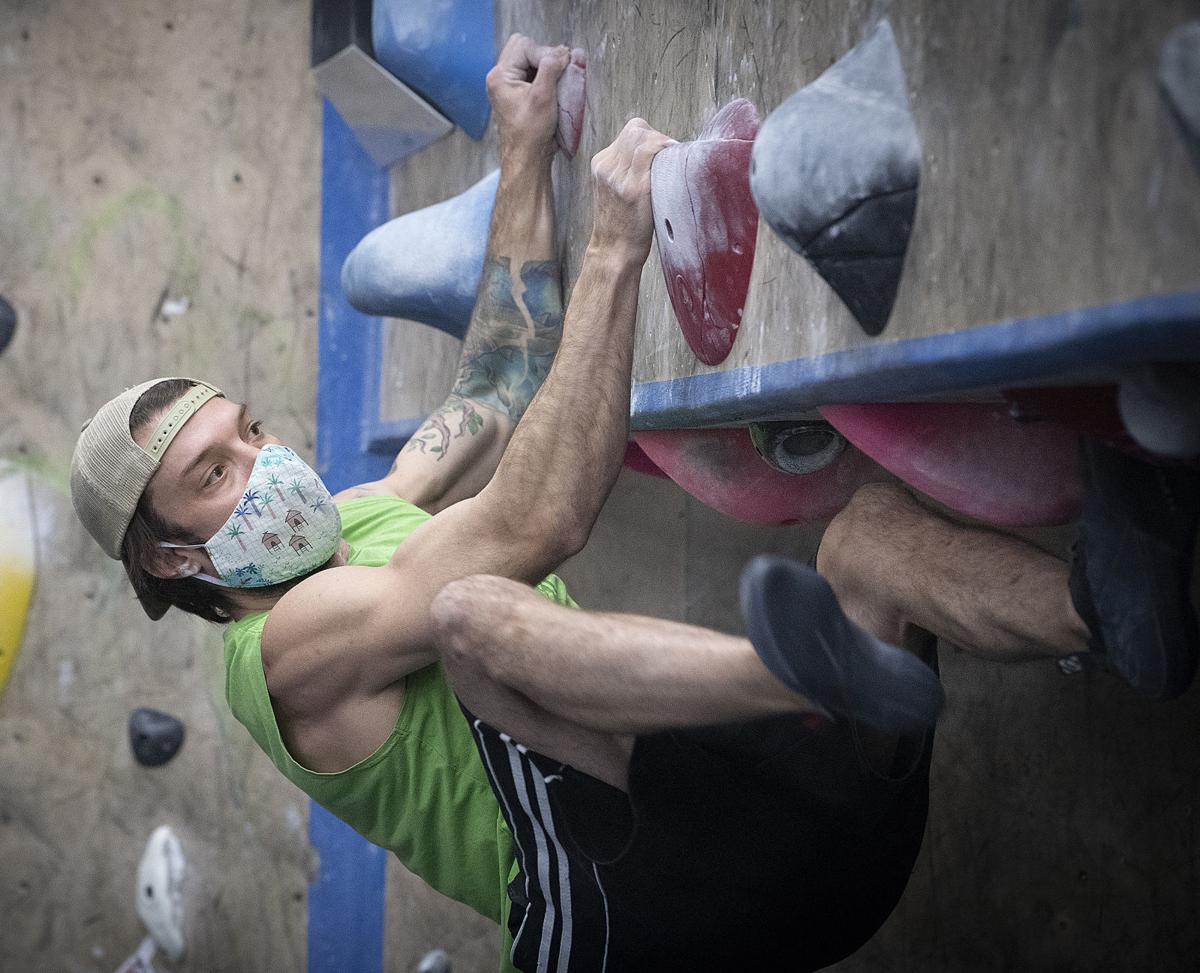 Steve Baranski, owner of the Boulder Yard climbing gym in Frederick, works his way across an overhang Friday evening as he works with young climbers. Baranski said it's rare they hit the existing 50 percent capacity, but by lowering capacity further, he said, he feels that more people will become wary of going to indoor fitness centers. As of 5 p.m. Friday, his gym was restricted to 25 percent capacity because of a new county regulation. 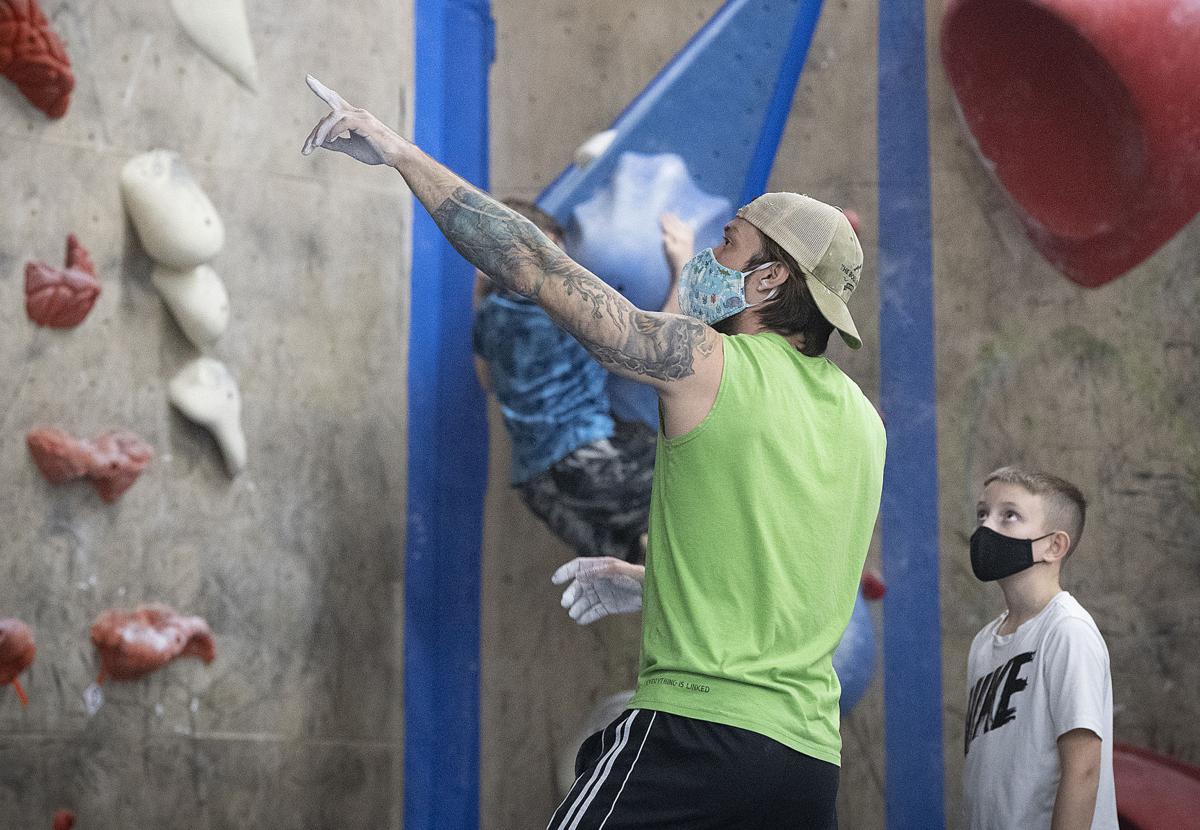 Steve Baranski, owner of the Boulder Yard climbing gym in Frederick, works with young climber Graham Otvos, 10, Friday afternoon. As of 5 p.m. Friday, his gym was restricted to 25 percent capacity because of a new county regulation.

Steve Baranski, owner of the Boulder Yard climbing gym in Frederick, works his way across an overhang Friday evening as he works with young climbers. Baranski said it's rare they hit the existing 50 percent capacity, but by lowering capacity further, he said, he feels that more people will become wary of going to indoor fitness centers. As of 5 p.m. Friday, his gym was restricted to 25 percent capacity because of a new county regulation.

Steve Baranski, owner of the Boulder Yard climbing gym in Frederick, works with young climber Graham Otvos, 10, Friday afternoon. As of 5 p.m. Friday, his gym was restricted to 25 percent capacity because of a new county regulation.

Steve Baranski, owner of the Boulder Yard in Frederick, didn't know about the new Frederick County regulation limiting capacity of fitness centers until three hours before it was scheduled to start on Friday.

But even with capacity lowered from 50 percent to 25 percent, he doesn't think it'll hurt his numbers, at least not on a daily basis.

Baranski said it's rare they hit 50 percent capacity, which was the previous cap set by Gov. Larry Hogan. But by lowering capacity further, he said, he feels that more people will become wary of going to indoor fitness centers.

"They don’t care about small businesses. We were already wearing face masks and stuff," Baranski said. "We can’t even get to [half] capacity, so if we have a day where we actually get busy, it would be nice to make some money."

Frederick County rolled out a new round of regulations regarding the COVID-19 pandemic, which went into effect at 5 p.m. on Friday. But business owners have been unclear about how exactly this will affect their businesses.

In addition to cutting capacity at fitness centers to 25 percent, the new regulations, which were passed late Thursday, cap houses of worship at 50 percent capacity and limit events held at venues including breweries, wineries and distilleries to 25 people or 25 percent capacity, whichever is less.

When the regulations first came out, however, it seemed like breweries, wineries, bars and more would be capped at 25 percent capacity during normal business operations due to the wording of the regulation.

Carly Ogden, co-owner of Attaboy Beer on Sagner Avenue, was distraught to think all the work she and her husband had put into building the new outdoor space and acquiring heaters would go to waste. She read the new regulations and assumed that both indoor and outdoor would be capped at 25 people at all times, and hadn't heard otherwise from the county.

But as Bryon Black, the county's attorney, and communications director Vivian Laxton later clarified, this only affects these businesses, such as breweries, when they hold private or public events.

This also includes wedding venues, although the new rule for them won't go into effect until Nov. 30, so people who had their weddings planned for the next two weeks won't have to cancel on short notice.

Meanwhile, retail stores remain capped at 75 percent and service establishments and restaurants are capped at 50 percent, as per Gov. Hogan's order.

For small business owners like Ogden and Baranski who understand the science behind the virus and its severity, it's confusing that different types of businesses have so many different capacities.

"They need to lower everybody, including Walmart. Walmart's making tons and tons and tons of money," Baranski said. "... Fitness centers are probably the hardest hit thing in my opinion and they’re hitting us even more now."

Large corporations such as Walmart and Amazon have increased their profits during the pandemic, according to the Wall Street Journal.

Baranski said he would be fine with lowering capacity or shutting down if he had replaced income of some sort.

"I haven’t gotten a single penny from anybody since June," he said. "I mean… it’s fine if they put their restrictions on, but they need to hand out some money to fitness centers then."

While Ogden was relieved the 25 percent capacity did not apply to breweries' day-to-day operations after all, she still feels the choosing of "winners and losers" in the pandemic is unfair.

"So somehow, based on whatever science they're looking at, they've chosen to pick certain businesses over others," Ogden said.

Either way, something needs to change in order to save small businesses, Baranski said.

"They’re making it impossible to stay in business," he said.

Just to point out that a store like Walmart has a huge volume. Go in and look up. High ceilings. That reduces the chance of spreading.

It’s also jam packed and there are enough knuckleheads in there not wearing masks or they are off the nose, plus the kiddies without masks. Keep the dammmed kids home if they can’t wear one!!!!

It'd be helpful to see an article addressing what financial support is available for small businesses that are struggling.

But as far as the need for government (local, state, or fed) to put restrictions in place vs the "just trust people to do the right thing" attitude, we have this quote from Governor Gordon of Wyoming, who resisted restrictions for a long time:

"People in Wyoming have been “knuckleheads” about the virus, he said.

“We’ve relied on people to be responsible and they’re being irresponsible,” Mr. Gordon said. “If I can’t rely on you, we’re going to have to do something else.”"

That was for the first two or so months... the money was never meant to last this long.

Decisions made by bureaucrats who don't have to earn money to live.

So sorry this is happening! I can understand the resentment toward large retailers. I don't understand still going to these in person when items can be shipped. But either way, it's true, they win.

179k cases Friday. Wear your mask and make sure it’s OVER your nose, and stop dragging the kiddies with you if they can’t keep them on...as was in CVS yesterday...2 kids...masks mostly off.