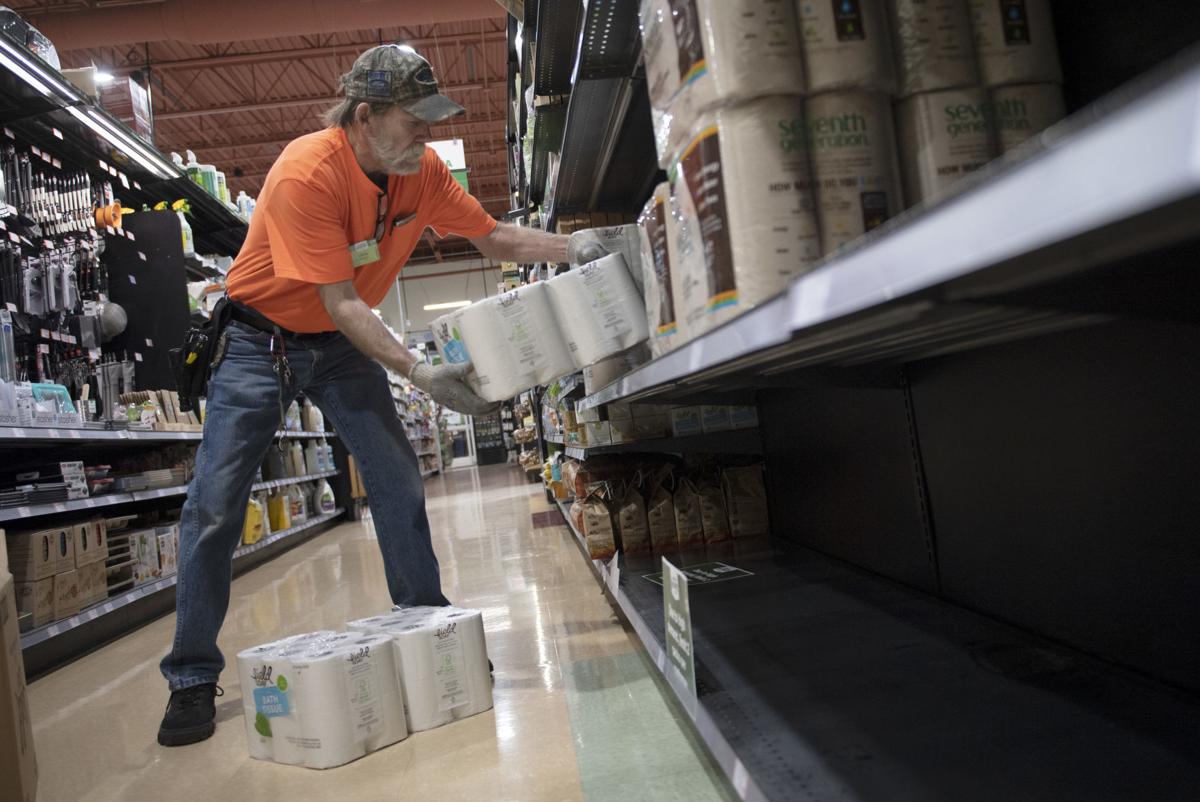 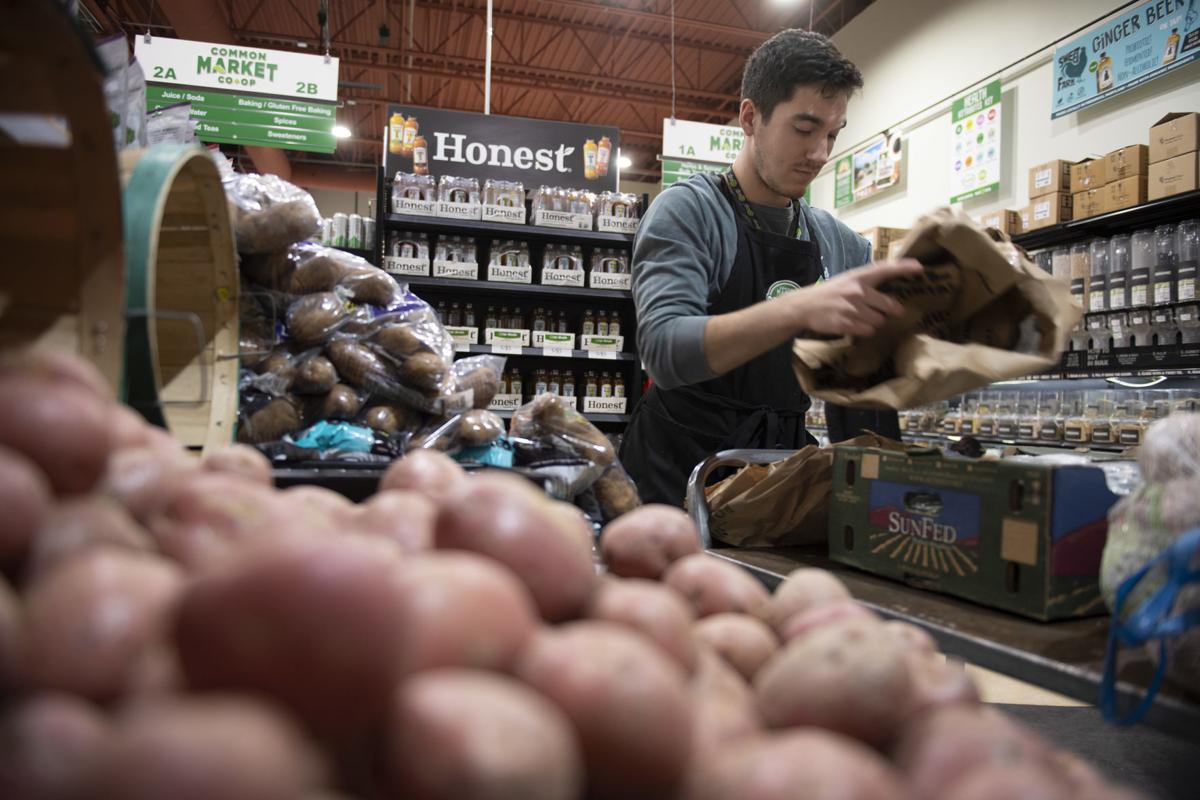 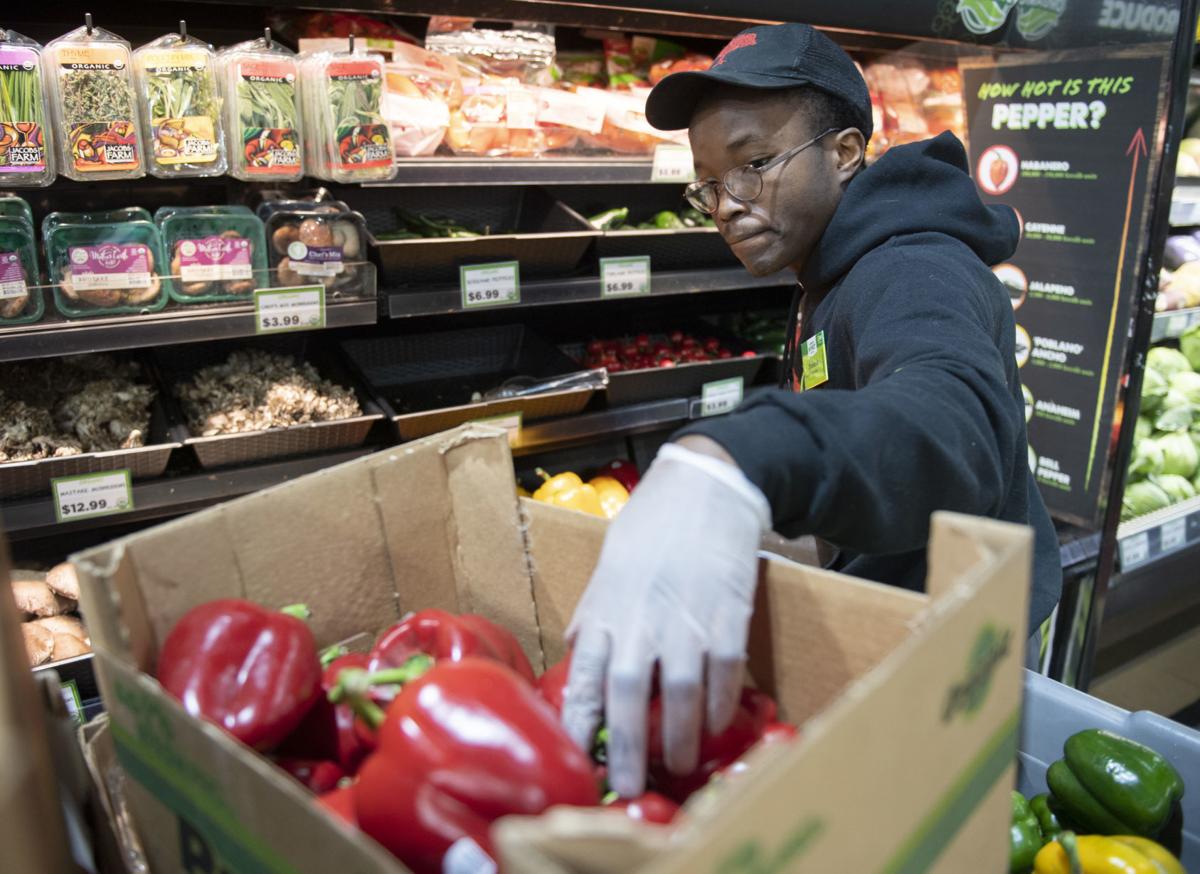 Stalanic Anu, who works in IT support at Common Market, pitches in to help restock the produce section of the store Saturday morning as increased demand on groceries has lead to shortages of some items.

Stalanic Anu, who works in IT support at Common Market, pitches in to help restock the produce section of the store Saturday morning as increased demand on groceries has lead to shortages of some items.

While some Frederick businesses like grocery stores are struggling to keep up with the demand in the wake of the novel coronavirus, others are seeing fewer customers.

Across the country, that lack of business has already resulting in layoffs, according to Crosscut and the Washington Post.

Restaurants and hotels are both at risk of being less attended, Rick Weldon, chief executive officer of the Chamber of Commerce said.

Many Frederick hotels rely on government travel to fill their rooms, and with many trips canceled, there will be a higher rate of vacancy, Weldon said.

Phil Bowers, president of Fountain Rock Management, which owns restaurants including Brewery’s Alley and Isabella’s, said that he has seen fewer customers this week in particular, although last week provided a slight dip as well.

“There’s definitely been less people downtown, there’s not quite as many folks walking around and driving around, that kind of stuff,” Bowers said.

Bowers said that sanitation is always a priority in any restaurant, but that his restaurants have taken more precautions lately by wiping down any surface that people touch frequently, and offering hand sanitizer to customers.

“I think from a restaurant standpoint we deal with health safety everyday, regardless of whether there’s a pandemic or not because we have to, we’re in a public place,” Bowers said.

He said he is concerned for the economy as a whole — it’s not just restaurants that would be affected, but any retail establishment. If people increasingly stay home, it’ll be difficult to make ends meet.

“We have employees that are reliant on income and that would be kind of a snowball effect that would be pretty dramatic if it came down to that,” Bowers said.

One solution he has been implementing is to stock up on take-out containers. He said that customers are more than willing to call in their food and pick it up if they are not comfortable eating at a restaurant.

Kim Firestone, owner of Firestone’s Culinary Tavern, said that business has slowed, but not enough to be a huge concern yet. He called the situation very “day to day.”

“If we lose business that’s concerning but we’re not the biggest part of the problem,” he said, referencing the spread of the virus.

The tips suggest limiting eating out to ordering take out and tipping just as much as you would if you had dined in at the restaurant. Eating take out instead of dining in can help promote social distancing and keep people safe.

For those who need to buy gifts for loved ones, the Partnership suggests purchasing a gift card, some of which can be purchased online or over the phone, instead of spending the time picking out a gift.

They also suggest ordering items online from the businesses who offer those services.

For a business that sells food and paper products, like Common Market, the problem isn’t people staying away, but people coming and buying large quantities of items.

Bob Thompson, general manager of Common Market, said that items such as toilet paper, soup and frozen foods have routinely been selling out all week. The store receives new shipments every day, but they’re still having trouble keeping up.

“The concern that we have is the supply chain is going to be disrupted and the distribution centers are going to run out,” Thompson said.

The store, like most establishments, has not been able to get hand sanitizer for a while, but now some of their orders are not being completely fulfilled. For example, the store recently ordered 50 cases of bananas but could only get 20.

“We’re taking it day by day, we are trying to make every precaution we can for the staff, for the customers,” Thompson said.

His one hope is that his staff will be able to take some time off soon. He has offered unlimited overtime to any employee who wants it to help with how busy the store has been.

“We’re all in this together and we all need to keep our chins up and be kind to each other,” Thompson said. “This is a difficult time we’re getting through.”

A previous version of this article incorrectly stated that Kara Norman, executive director of the Downtown Frederick Partnership, said she had not heard any concerns from businesses.

Such a moronic herd mentality.

PEOPLE, THIS IS NOT A WEATHER EVENT OR WAR TIME.

Production and distribution of items are not at risk AT ALL. Lets just break this down a little. Toilet paper. Comes from trees, trees are not affected by the virus. Hand sanitizer. Chemical processing plants to produce these are not in danger, they have power, they have material.

Today, a date that will live in near infamy,. the Fed dropped its pants all the way to the floor (they were already down to its ankles) for the dotard president to stick his business into theirs The "independent" fed got tired of being bullied and threatened by the so-called president, so it opened the treasury to businesses for free looting. Free money, but not for you and I. Free money! For businesses in general to build vacation homes for their top dogs. Free money! For the Dotard's family in particular to build hotels and resorts. Students, you must still pay your high-interest loans to the banks who just got free loans! That's what you get when you elect Republicans. Don't ask them how this will all be paid for. You don't want to hear.

I thought you were describing the Quantitative Easing during the Obama administration. Did you start paying attention to politics after Trump got elected? Many seem to have.

As of this afternoon, Giant (at New Design Rd) is completely out of meat and produce. Not to mention bleach and detergent products. In an e-mail I just received from one grocery store, distributers and suppliers cannot keep up. Who knows how long this will continue?

Until people regain their sense. Viruses typically take a few months to mutate into a more benign version.

Eat at McDonalds. They're higher up in the distribution chain. They won't run out of greaseburgers and fries, ever.