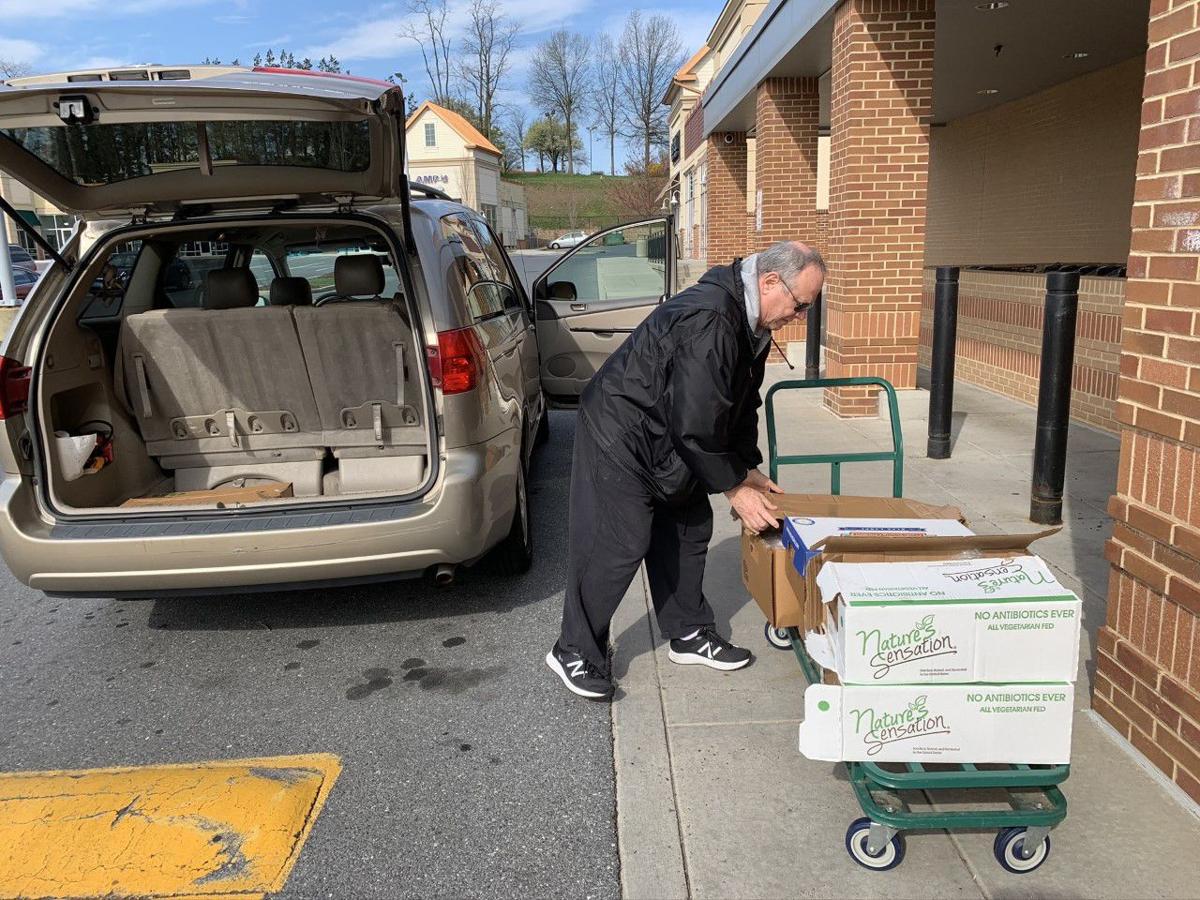 Paul Green loading a donation of 280 pounds of chicken into his vehicle to deliver to the Greater Urbana Area Food Bank on Sunday. Green and his daughter, Jenn Homan helped raise money for the donation from Homan’s coworkers and relatives. 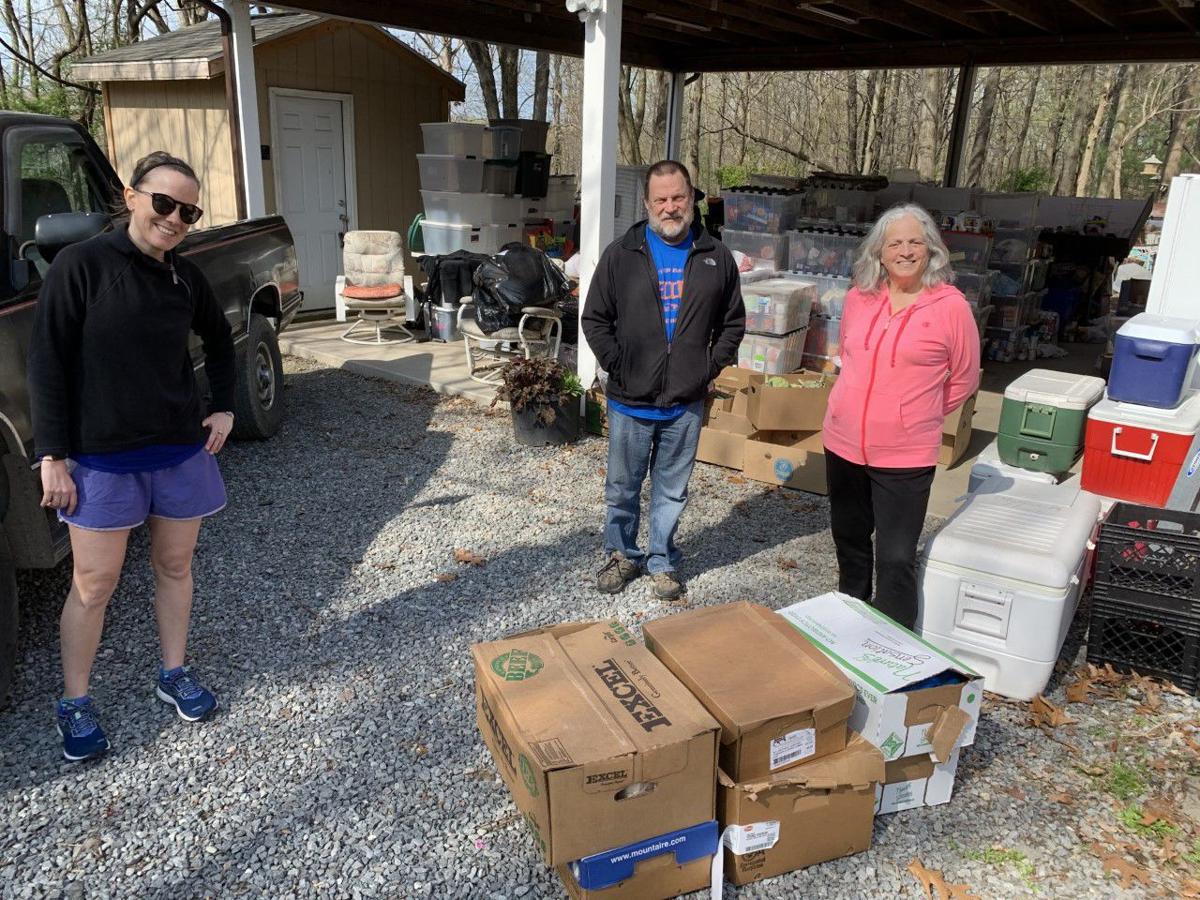 Jenn Homan (left) delivering a donation of 280 pounds of chicken to Larry (center) and Jo Ostby (right), who run the Urbana Area Food Bank. Homan and her father, Paul Green, helped raise money for the donation from Homan’s coworkers and relatives.

Paul Green loading a donation of 280 pounds of chicken into his vehicle to deliver to the Greater Urbana Area Food Bank on Sunday. Green and his daughter, Jenn Homan helped raise money for the donation from Homan’s coworkers and relatives.

Jenn Homan (left) delivering a donation of 280 pounds of chicken to Larry (center) and Jo Ostby (right), who run the Urbana Area Food Bank. Homan and her father, Paul Green, helped raise money for the donation from Homan’s coworkers and relatives.

While shopping on Thursday for an extended period of working from home amid the novel coronavirus outbreak, Urbana area resident Jenn Homan happened to check her local food bank’s Facebook page.

“I follow their Facebook page and she posts videos and lets everybody know what they’re running low on and people will sometimes comment back,” Homan said of the Greater Urbana Area Food Bank, which Jo and Larry Ostby run from the basement of their Ijamsville home. “… [Jo Ostby] will also post videos talking about their needs and at the end she had said that they were running low on meats, like, very low.”

Having donated before to support the food bank, Homan decided to reach out to her father, Paul Green, and the two quickly made a plan to help the food bank fill its need. Green, a retired Safeway employee, discovered the local supermarket recently stocked up on chicken thanks to a deal the chain discovered to buy meat previously scheduled to be shipped to now canceled cruise lines due to the spread of COVID-19.

“They were selling it at 99 cents a pound to the public,” Green said.

On Friday, Green bought 80 pounds of chicken for about $80 and donated the entire shipment to the Ostbys within an hour, he said.

But as welcome as the donation was, it wouldn’t be enough to cover the demand the Ostbys expected to face come Monday, which is one of the busier days of the week for people to pick up from the food bank, according to Jo Ostby.

The demand for food has also increased following Gov. Larry Hogan’s orders closing many businesses, the state school system and other non-essential services to combat the spread of the virus.

“We are currently taking care of 250 families, over 800 men, women and children, you can add to that veterans, senior citizens, people with addictions, people in all kinds of situations, and what it has meant here is 150 children don’t get free breakfasts and lunch because they’re not at school and probably about 30 senior citizens don’t get reduced price lunches because the senior center is closed,” Jo Ostby said.

Restaurants that closed have generously donated their pantries to the food bank and other businesses and individuals have also pitched in, allowing the Urbana food bank to more or less meet the demand, but at a time when even eggs are a luxury, protein and meat especially have been hard to come by, Jo Ostby said.

Upon hearing the plight of the nonprofit organization, Homan mentioned the shortage to Jacqueline Messner, a coworker at the Frederick Health Endocrine and Thyroid, during a conference call Friday.

”She had actually called me about a patient on Friday and we were discussing that and she mentioned that she had made this donation of chicken … so we just felt like this is such an important time for us as a community to band together and help each other,” Messner said, recalling how word spread quickly in calls and emails between coworkers from that initial conversation. “It just kind of caught on and before we knew it we had raised a total of something like $480.”

Acting fast to capitalize on the low meat prices in time for the surge expected at the food bank on Monday, Green and Homan used the money raised from Homan’s coworkers and several relatives to buy another 280 pounds of chicken and donate $130 in cash to help those with special needs at the food bank, Green said.

The food bank and the people it serves in the Urbana area — in accordance with the food bank guidelines, the Greater Urbana Area Food Bank only serves individuals who live in Urbana, Buckeystown, Ijamsville, Monrovia, Adamstown, Green Valley, New Market and some portions of Mount Airy — were very grateful for the donations, Jo Ostby said, but the need is ongoing.

”We know Jenn and her father, they help us all year long, and this was really a great thing to see, how she motivated people in her office to contribute, as well,” Jo Ostby said. “But it’s important to note that all of the meat that was donated is gone now, and before that there was a long period where the people who were relying on us didn’t have any protein.”

Green said his family plans to keep trying to support the regional food bank moving forward, but pointed out that there were nine food banks across the county, each of which were likely in the same position as the Greater Urbana Area Food Bank during the pandemic.

“In a time like this, people are normally looking out for themselves,” Green said. “They’re not thinking about donating to causes like this, but people at the food bank don’t stop coming to pick up food, that critical need is still there.”

There are nine food banks in Frederick County, each dedicated to serving residents in need in its own region:

I haven't lost my job and still have my usual income. I just wrote a check to help the FCAA purchase groceries for the Frederick food bank. When the Federal stipend of $1200 is posted to my account, I will send more funds to help those who have lost their income during this crisis. I hope that others who can afford to will join me in making such a donation. To those of you who may have lost your income, don't be embarrassed to ask for assistance during this time. That's what it is there for and you are not alone in your needs at this time.

Way to go garden. I went to Costco today and bought several cases of soups and vegetables for our local community food bank and dropped them off on the way back to Bosco Manor.