A federal judge struck down a lawsuit from Del. Dan Cox and several others Wednesday which sought to challenge the stay-at-home order and regulations put into place by Gov. Larry Hogan over the coronavirus pandemic.

In a memo written Wednesday, U.S. District Court Judge Catherine Blake said the state and country are “now in the grip of a public health crisis more severe than any seen for a hundred years.”

Cox (R-Frederick and Carroll) led a group that had argued Hogan’s executive orders, including the stay-at-home order, were overreaching of the federal and state constitutions.

Blake, however, said in her ruling that the plaintiffs had not met the burden of proving Hogan’s executive orders were overreaching and they did not prove those orders were not in the interest of protecting public health.

“Public officials cannot responsibly exercise their broad authority to protect the health of the entire community without considering the data, the science, and the advice of experienced public health professionals,” Blake wrote. “Governor Hogan, exercising the powers given to him by the legislature in the face of the COVID-19 crisis, has made reasonable choices informed, if not dictated by, such data, science, and advice.”

Blake denied Cox and others’ motion for a temporary restraining order and a preliminary injunction. The plaintiffs were seeking relief from alleged damages caused by churches and businesses being closed due to the coronavirus pandemic — including Adventure Park USA, which reported a potential revenue loss of $700,000 this spring, The Frederick News-Post reported earlier this month.

Blake, in her ruling, said they had not proven Hogan (R) was making the executive orders for reasons outside of public health and safety. 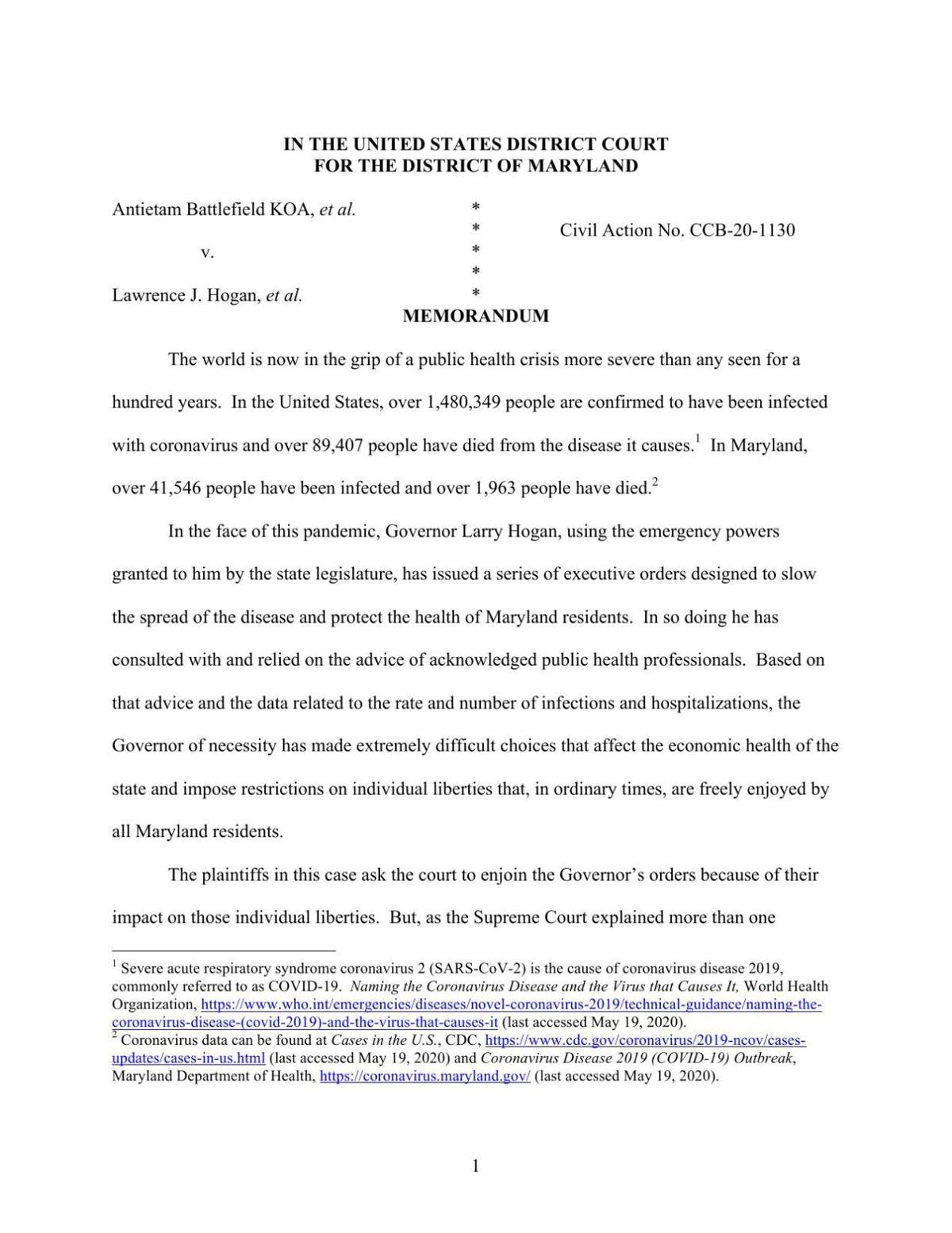 “In opposing the Governor’s stay at home orders, including the prohibition on large gatherings, the closing of nonessential businesses, and the requirement that face coverings be worn on public transportation and in retail stores, the plaintiffs minimize the risks of this pandemic but cite no contrary scientific authority,” Blake wrote.

Cox appeared to disagree with the ruling in a Facebook post Wednesday night, citing the following Winston Churchill quote: “Success is not final. Failure is not fatal. It is the courage to continue that counts.”

“Keep us in your thoughts and prayers as we fight on for our very Constitution and liberty,” Cox wrote. “This ruling must not stand.” 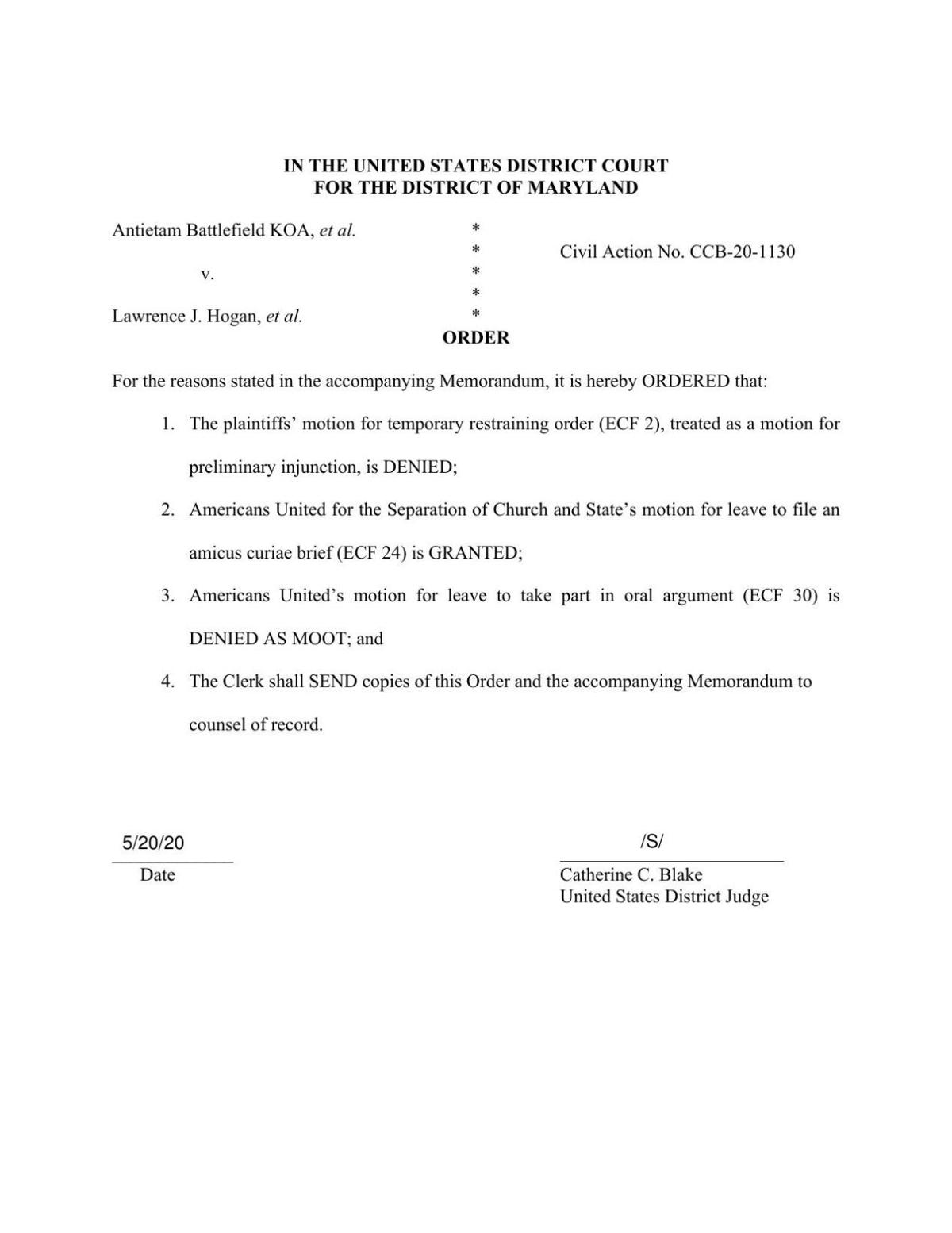 Cox could not be reached for further comment Wednesday evening.

Mike Ricci, a spokesman for Hogan, said in a statement his office appreciated Judge Blake’s ruling, and noted she compared the governor’s response to that of President Donald Trump and White House officials.

Gov. Larry Hogan’s office pushed back on claims made in a lawsuit filed by Del. Dan Cox this weekend, a suit which claims Cox’s First Amendmen…

I will be so glad when this “beard” thing is over. There are some really bad ones out there, including this one. Don Jr.’s is the worst, it looks like it’s pasted on.

Republican suing a Republican for doing his job. Maybe, Dacey should do his job too.

Dan is clearly an incompetent lawyer. I have no idea how he makes a living as a lawyer. Who would hire this guy?

It is clear he had zero chance of winning the case. The state Constitution gives the governor broad power, perhaps too broad but that is a question for another day, post the current crisis. I only say that as it seems no one person should have overly broad powers without a check, which could be the legislator. Perhaps the governor should be limited to 2 weeks or even a month and at that point the legislator would need to be on board to proceed longer. Yes, I have been somewhat critical of Hogan and of Gardner and still would like to understand where her power to declare a continued shutdown or any shutdown comes from. It is not in the county charter although there probably should be something there. I think the question there is can the governor grant powers to local officials outside of the stated powers in the various charters or local documents. I think all this can and should be addressed next legislative session and a serious look taken to see if there should be a check and balance here. I think overall Hogan has done a good job, perhaps he could have moved into stage one a little earlier but I could not say if I were in that position that I would not have erred a bit (if it is an err) on the side of caution. The trend is still down and even a small bump would be expected especially as testing is expanded. What we really need is people out of the house and back to work for many, many reasons including health.

I like your logical and well thought out posts. Sure to PO the liberal never Trumpers. Good for you! [thumbup][ninja]

That sounded reasonable to me too. Why would it piss me off?

Instead Cox should have sued Trump and the Trumpettes for ignoring science and the pandemic and thereby causing many thousands of needless deaths. Whoops, I guess that means he would be suing himself!

You do believe everything you see in the media don't you?

He is probably auditioning for Trump - another lost cause.

Not only are we paying court costs, but we are paying Cox's salary while he sued our government, and he is apparently appealing the ruling! Cox claims to be able to argue cases to the Supreme Court, yet he lost this flimsy pathetic case in MD District Court.

Cox should be required to pay court costs for all parties.

Cox must have rocks for grey matter
the judge thinks he's mad as a hatter
one more tea party guy
who says, "live free or die."
here's hoping he just does the latter.

He probably should have read Maryland’s constitution and the U.S constitution first. Would have saved him from embarrassing himself

Ain’t that the truth! But he gives politicians a bad name. 😉

"...Cox appeared to disagree with the ruling in a Facebook post Wednesday night, citing the following Winston Churchill quote: “Success is not final. Failure is not fatal. It is the courage to continue that counts...”

This is also a chant Charles Darwin taught to a long line of lemmings as they proceeded to jump off a cliff. Churchill just borrowed it from Darwin back during WW II.

Last time I checked, insanity was defined as attacking a concern in a similar fashion repeatedly, expecting a different outcome.

Not good when your court case is a moniker that can be applied to insane lemmings.

It’s clearly time to get out to the house because the U.S. only reported 45,251 new Covid—19 cases on Tuesday.

That isn't "new". that is a running total.

Clown show gets slapped down. What a complete waste of the Court's time and an absurd publicity stunt. Zero respect for this guy.