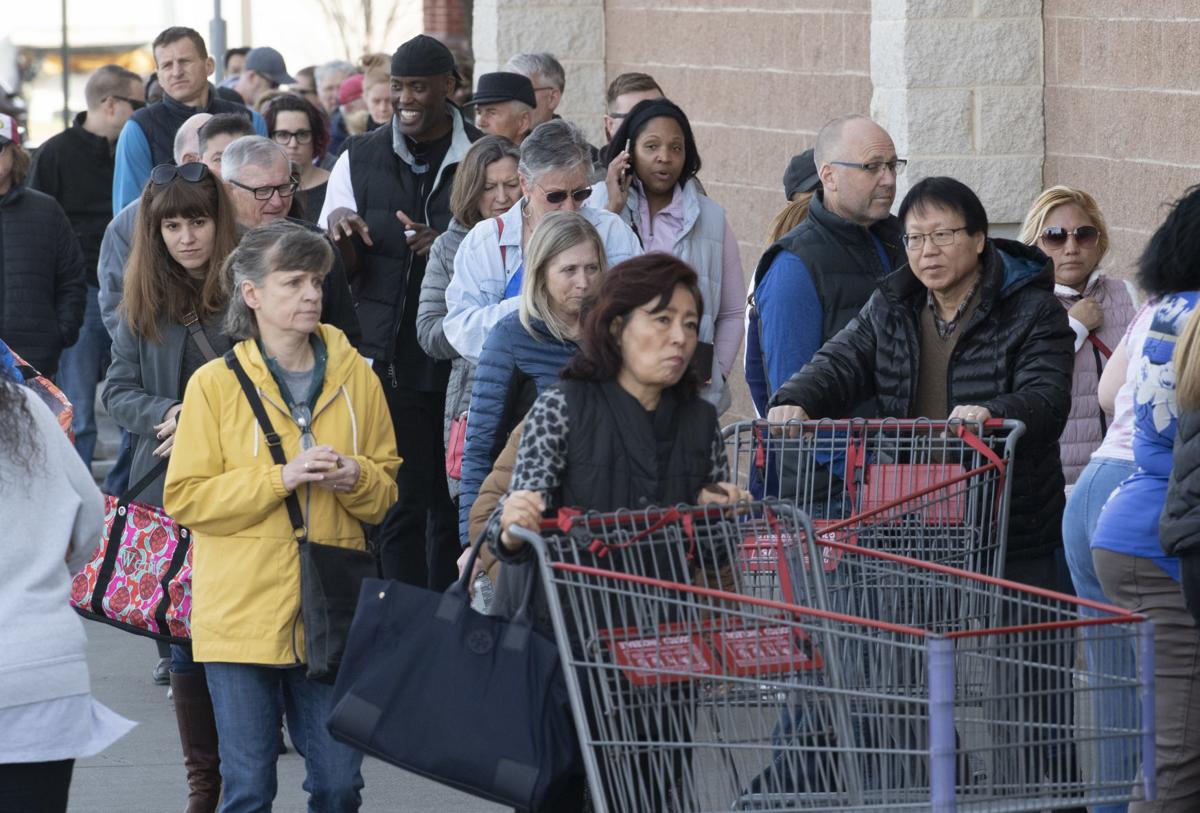 Shoppers waiting to enter Costco Saturday morning formed a line that stretched partially around the building before the store opened. 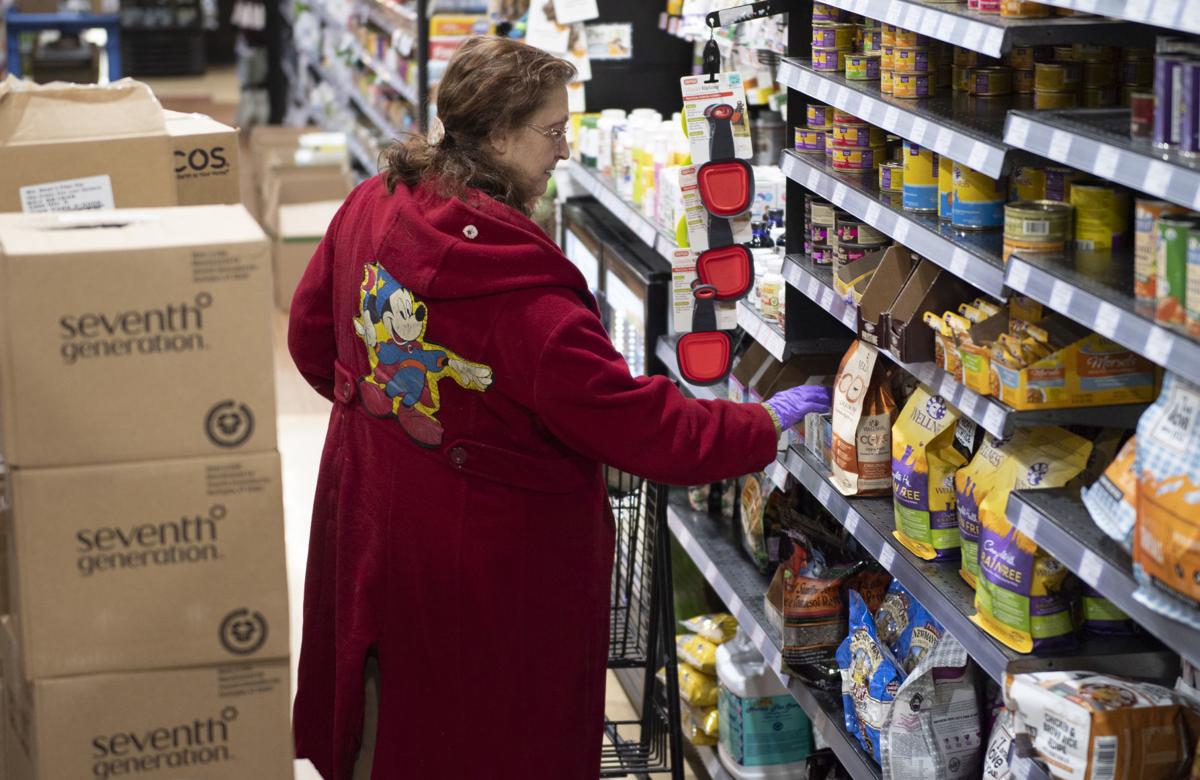 There were long lines at the checkouts at the Frederick Costco late Thursday afternoon. Some items appeared to be sold out, including toilet paper. 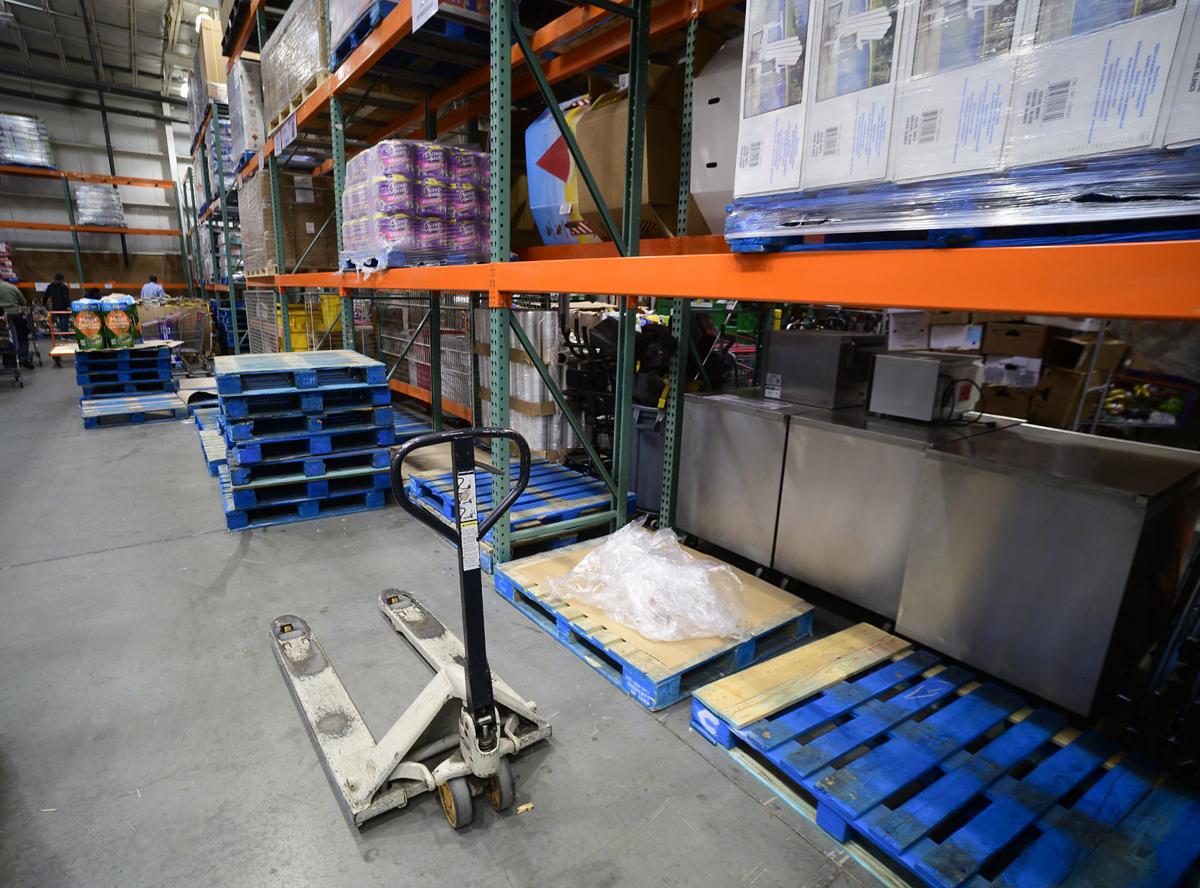 This is the view of the area where toilet paper is sold at the Frederick Costco late Thursday afternoon showing empty shelves.

Shoppers waiting to enter Costco Saturday morning formed a line that stretched partially around the building before the store opened.

There were long lines at the checkouts at the Frederick Costco late Thursday afternoon. Some items appeared to be sold out, including toilet paper.

This is the view of the area where toilet paper is sold at the Frederick Costco late Thursday afternoon showing empty shelves.

A line of customers extended through the Costco parking lot on Monocacy Boulevard in Frederick on Saturday before the 9:30 a.m. opening time.

Once the doors were open and customers filed inside, more and more people got in line, having to walk the length of the store to get to the end of it.

A security guard came outside and reminded people that the store was completely out of toilet paper and paper towels.

Tory Detweiler wasn’t even going to the wholesale club to stock up. She just needed a few items.

Many stores throughout Frederick and the state are overwhelmed as the threat of the coronavirus spreading in Maryland increases. In the face of uncertainty and a recommendation to stay home as long as possible, people are stocking up – but it’s different than pre-blizzard shopping. People don’t know how long they could be quaratined in their own homes should there come a time when they might be required to do so.

Others are already practicing social distancing and trying their best to self-quarantine, like Denise Prosnick, a teacher. Both she and her child will not have to go to school for the next two weeks, as all Maryland public schools were ordered to close, and her husband can telecommute. So the family plans on staying inside as much as possible.

Still, Prosnick, who was shopping at Common Market on Buckeystown Pike early Saturday morning, said that she’s not panicked. She hopes people can stay calm.

Shannon Aleshire, chief executive officer of the Frederick County Mental Health Association, said that the coronavirus, and the way it’s been discussed in the 24-hour news cycle, can naturally lead to feelings of anxiety.

“I think it can heighten anyone’s anxiety, especially those that are hearing that they’re in the high risk groups, or people who aren’t getting their information from reliable and accurate sources,” Aleshire said.

While she’s staying informed, Imani White said that the uncertainty around the virus has been making her want to prepare. She went to the Common Market to buy peanut butter, vitamins and bottled water.

“Just in case, since we don’t know what’s going to happen,” she said.

She works at a gym and said that the whole staff has been more vigilant than usual about wiping down the equipment.

“Being prepared, that’s the best thing we can do at this point,” she said.

Karen Yuschak, who was also shopping at Common Market, wore disposable gloves to the store. She was stocking up on a few items and getting things for friends who couldn’t find household staples anywhere.

Yuschak works in a medical office with people who have respiratory issues, so her main concern is spreading the virus to others. She’s been taking a list of precautions, from wiping down her belongings with a bleach and water mixture to leaving her shoes outside when she comes into her house.

She said that she’s been reading and watching a lot about the virus in the last few days.

Aleshire recommends limiting news consumption, stick to reputable sources like the Center for Disease Control and World Health Organization and to not dedicate all day to watching the news, especially when people are stuck inside.

“If they’re spending every waking hour or the majority of their time digesting news and social media regarding the coronavirus, it’s kind of a self perpetuating cycle and it definitely can make you more anxious,” Aleshire said.

The availability of food and household items isn’t the only thing worrying some people. Don and Cindy Veals, who went to Costco because they happened to need dog food, said that they are also concerned for their son in college, who isn’t sure what the rest of his spring semester will look like.

Additionally, they’re concerned about their small contracting business, which has not yet been affected, but could be in the future.

“It’s not like you can work from home,” Don Veals said.

Other people aren’t particularly worried. Eric Linderman was going to Costco to get steaks. He said he isn’t concerned about the virus.

“I think it’s a little overblown,” he said. “I mean, I don’t want to get sick, but it doesn’t seem to affect people in good health.”

He said he wouldn’t want his grandmother to get it – but then again, he can’t see her anyway, since all nursing homes have barred visitors.

Aleshire said that the most important things to do are to follow all guidance by healthcare officials, refrain from panicking and to take care of yourself.

“It’s finding that balance, we need to take time for self care, we need to make sure that we’re eating right, we’re getting enough sleep, we’re exercising, we’re practicing mindfulness,” Aleshire said. “All of those things that keep you healthy every day are going to help keep you healthy now too.”