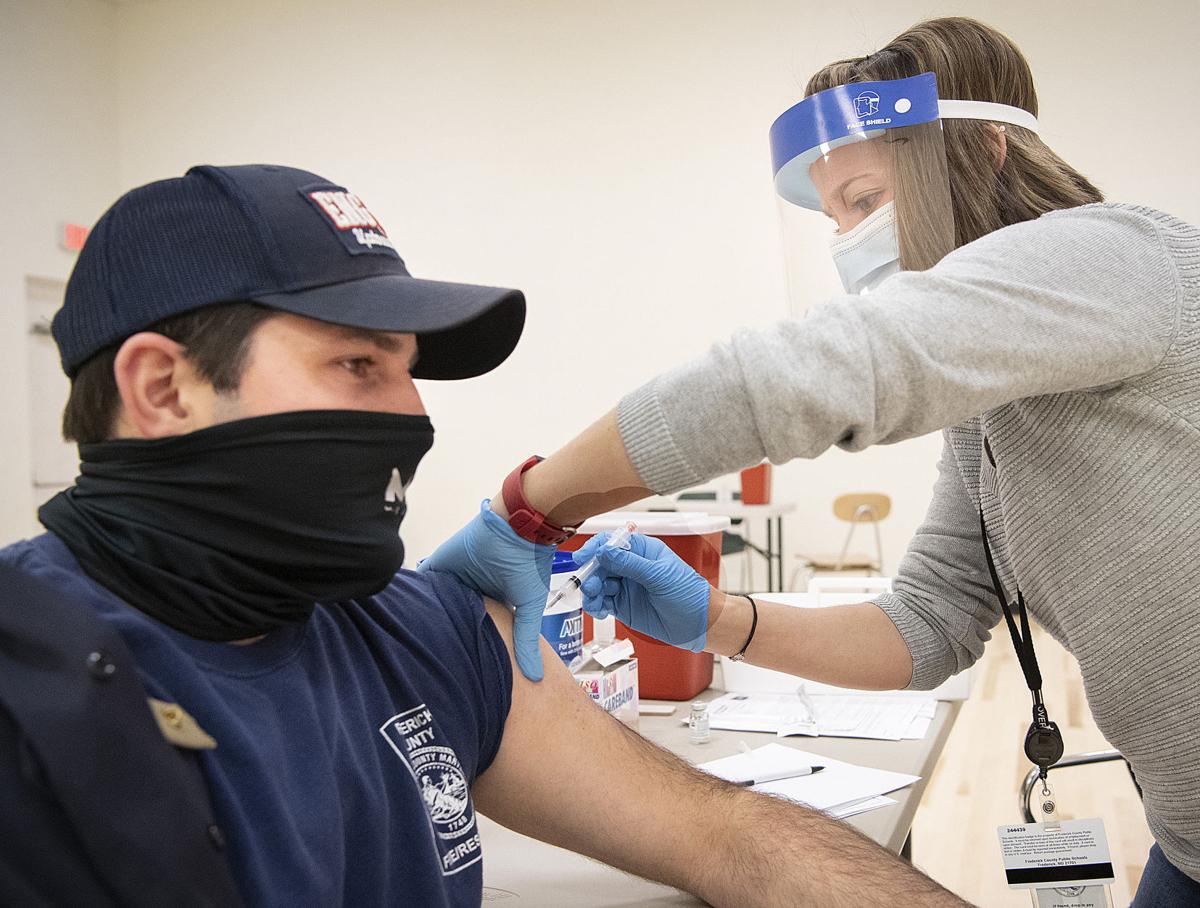 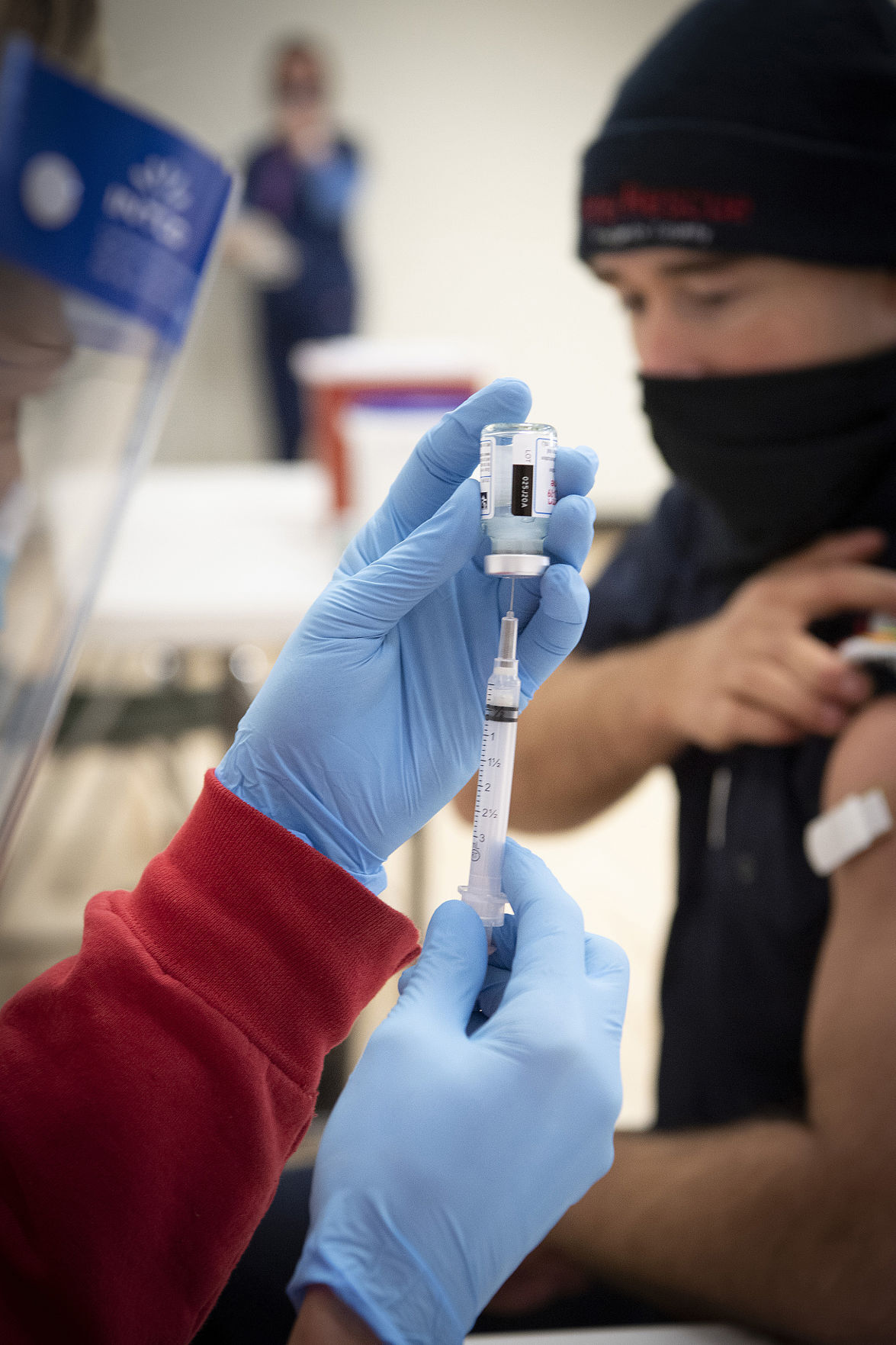 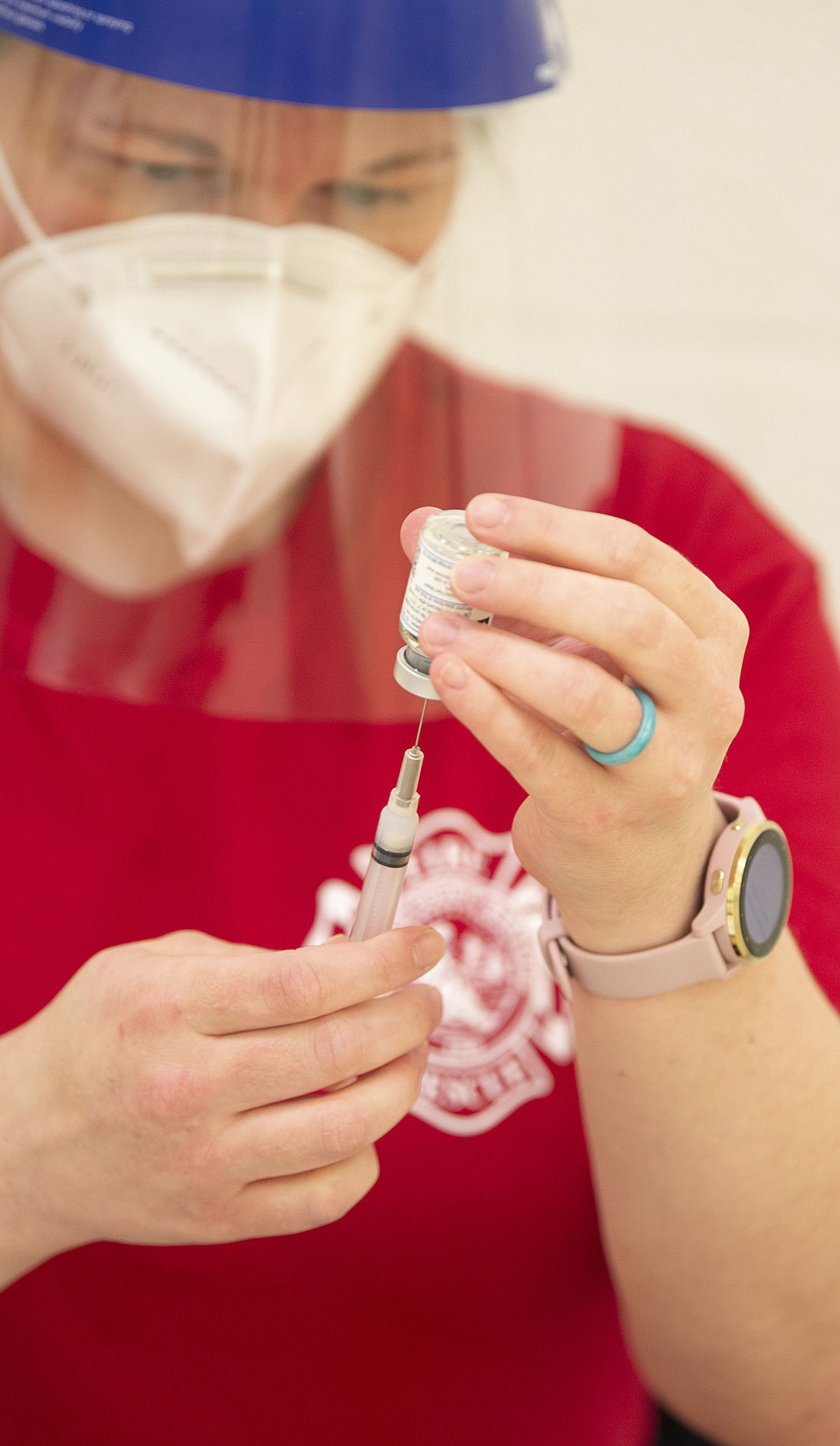 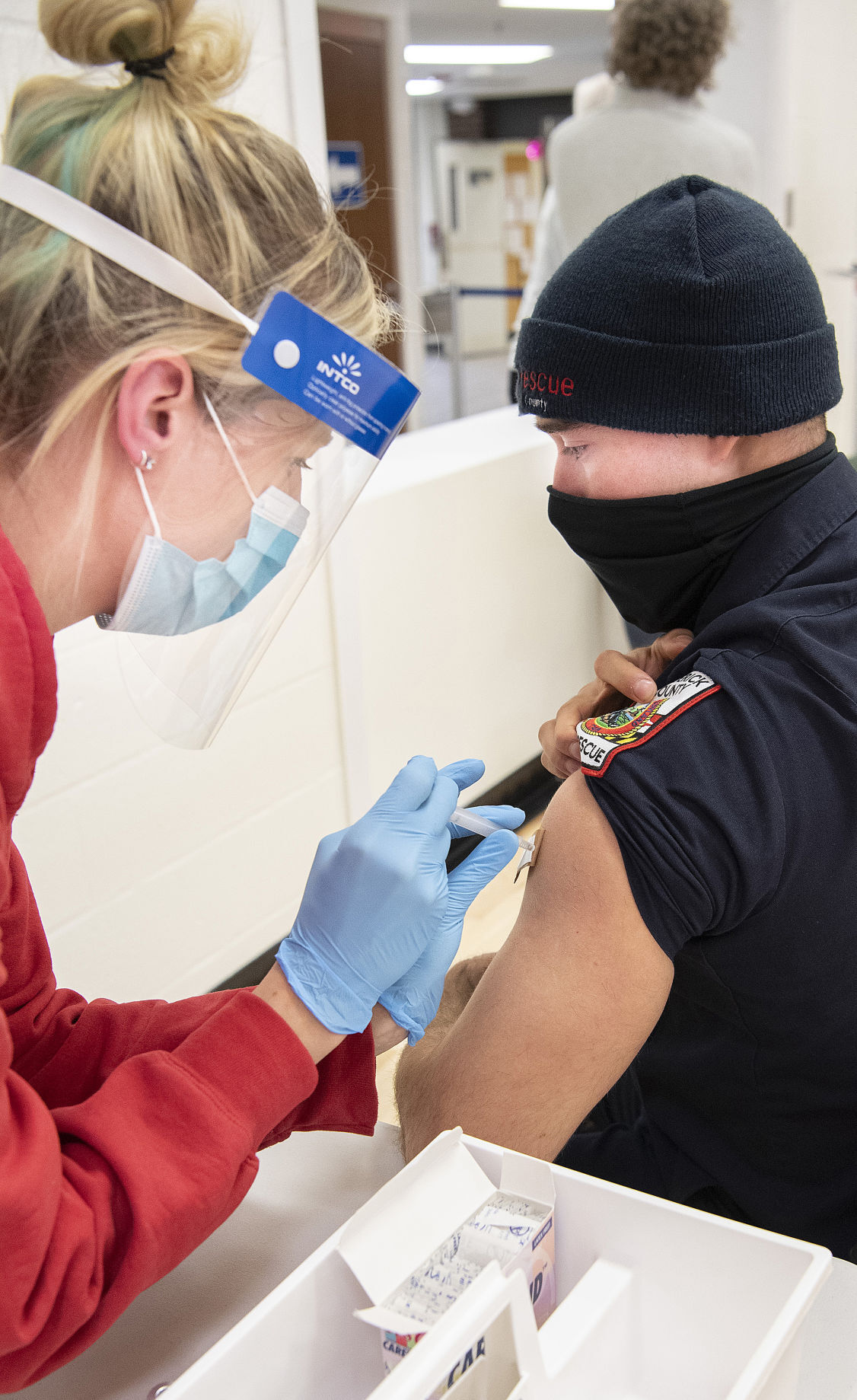 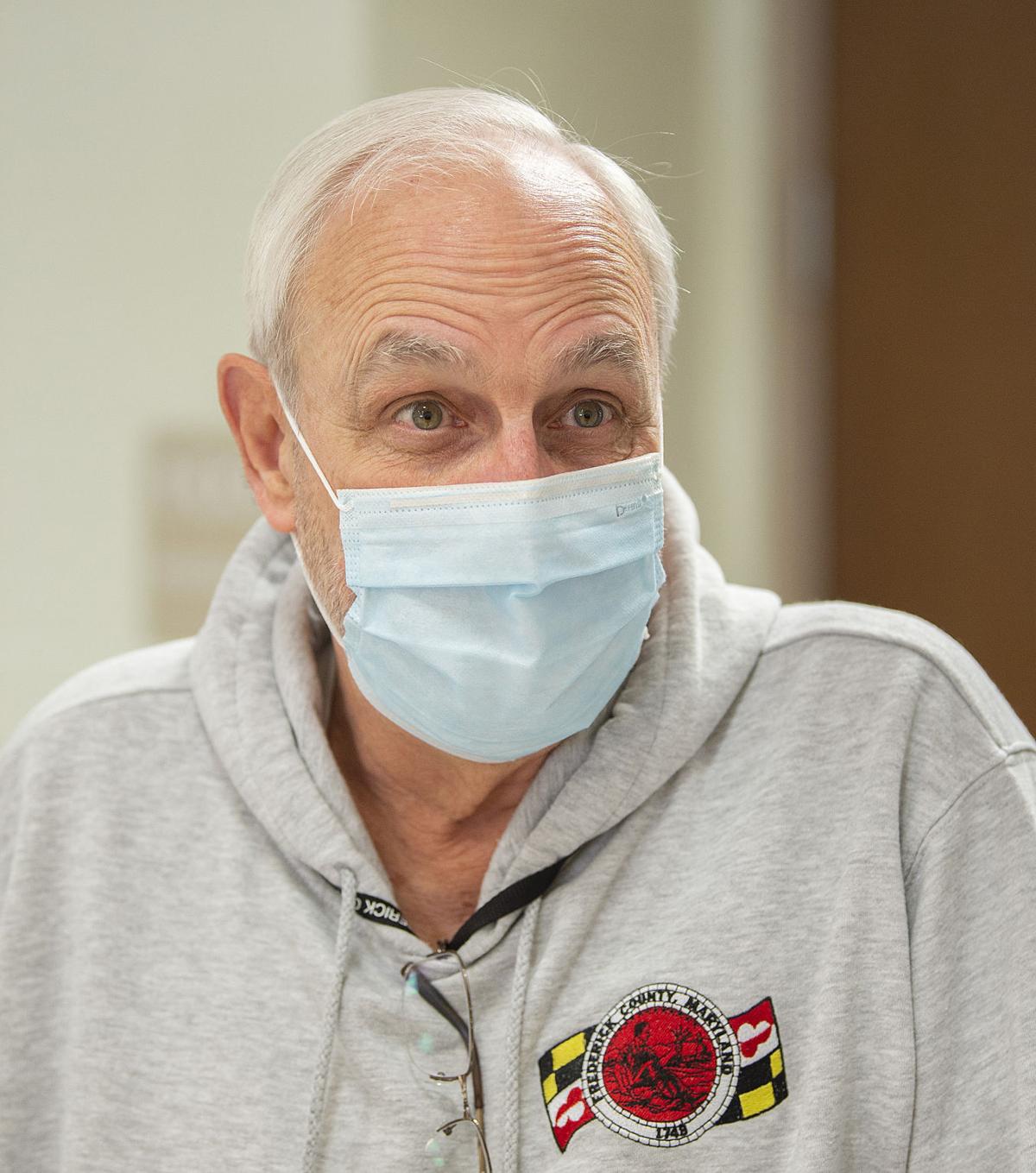 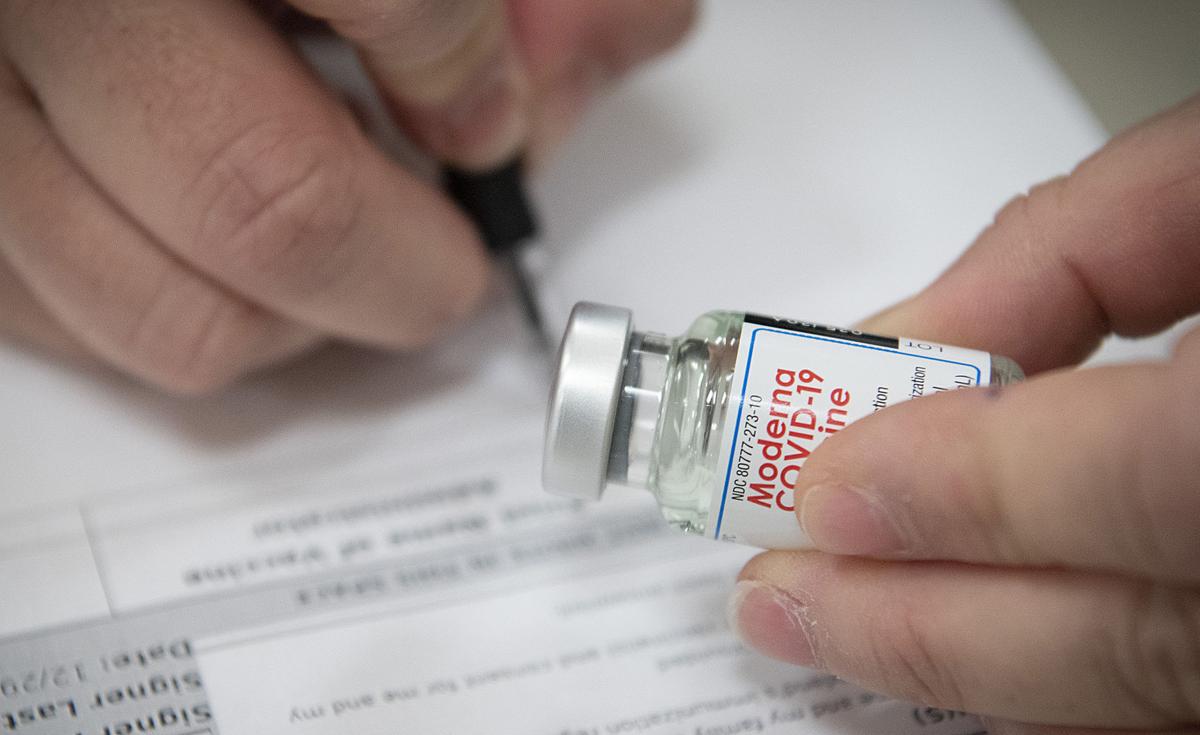 In Jesse McKittrick's line of work, the danger is usually pretty obvious.

But since the coronavirus pandemic began in March, that hasn't really been the case.

On every call for Frederick County Fire and Rescue, McKittrick and his colleagues have been wearing extra layers of personal protective equipment to shield themselves from an invisible, life-threatening enemy.

On Tuesday afternoon, McKittrick received yet another one, along with the peace of mind that it brings.

McKittrick, a 16-year veteran with Frederick County Fire and Rescue Services, was among the Frederick County first responders to receive the first injection of the two-dose COVID-19 vaccine from drug manufacturer Moderna.

The vaccinations were among the first to be administered by the Frederick County Health Department at one of its primary COVID-response sites, the Scott Key Center on Rocky Springs Road.

McKittrick's job brings him into potential contact with the virus on just about every shift, and he has been worried about bringing it home and spreading it around.

"For me personally, I have been stressing over it for sure," he said.

So, being among the first to receive the vaccine brought him "a lot of relief."

He figured that he and his colleagues would be near the front of the line, but guessed that it might be mid-January before they received it given the limited supply at the onset of the rollout.

The county health department was planning on running the first of its vaccine clinics for first responders — in this case for Frederick County Fire and Rescue personnel and for those administering the shots — from 1-3 p.m. on Wednesday. But after receiving the shipment of Moderna vaccine a day earlier than expected, they moved the timeline up by 24 hours and notified the fire department.

"People need it," Dr. Randall Culpepper, the deputy health officer for Frederick County, said on a day the county's seven-day, rolling positivity rate surpassed 10 percent for the first time since May 28 (10.44 percent).

It now stands at 10.74 percent after jumping nearly a full percentage point from the previous day (9.79 percent).

Culpepper said the health department is monitoring more than 30 "outbreaks" in the county and can't afford to wait to distribute the vaccine if there is enough supply.

There have been 10,891 confirmed cases of COVID-19 in Frederick County after another 103 were reported Tuesday. So far, 174 Frederick County residents have died from COVID-related health issues.

Culpepper said the county health department has received 1,500 doses of the vaccine thus far, a small number of which were used last week for a test run of Tuesday's clinic and then roughly 50 more at the clinic itself.

The county is being conservative in administering its initial doses of vaccine because it has to ensure it has enough when people come in for their second shot in a month, Culpepper said.

All of the vaccine the county health department has received so far has been from Moderna, which received emergency-use authorization from the Food and Drug Administration on Dec. 18. The vaccine was shown to have 94 percent efficacy and doesn't have to be stored at ultra-cold temperatures like the COVID-19 vaccine from Pfizer.

Frederick Health Hospital, which was treating more coronavirus patients Sunday (63) than at any other point of the pandemic, has been administering the Pfizer vaccine to its front-line health care workers since Dec. 17.

The Pfizer vaccine, which received FDA approval Dec. 11 after demonstrating 95 percent efficacy, requires two doses that are spaced three weeks apart, while the timeline stretches to four weeks for the Moderna vaccine.

First responders who received their first dose Tuesday from the county health department made their appointment for the second dose before they left.

It's unclear when the county health department will run another clinic for first responders because it depends on the size and timing of the vaccine shipments. But health department officials said there will likely be multiple clinics next week, with Monday being a probable date for the next one.

Culpepper estimated the vaccine will become available to the general public by the middle of March, but he cautioned that timeline could be a bit optimistic.

For months, a tucked-away, nondescript building on Rocky Springs Road has served as a de facto hub for Frederick County’s COVID-19 response.

20 million vaccinations promised by tomorrow, 11 million doses actually distributed to the States, less than 3 million have been vaccinated. Was that Trump’s Plan under Operation Warp Speed?

This is going way too slow, with very poor communication to the general public. Florida is administering to individuals over 65 already, yet we’re still doing front line health providers, and scheduling administrations a week apart. It’s time to “get with the program,” now!

Read the article. They just got their first shipment this week and started vaccinating the next day. It's hard to be faster than that! No state has received enough vaccine to start providing it to anyone other than healthcare workers and first responders. Please provide a link to the Florida article you reference.

Excellent news, these guys and gals rock and have been working right through this like soldiers.

I thought that the feds were holding back doses to make sure they had enough for the second dose. If so, why would we hold them back at the local level too?

Where are the “outbreaks” around the County us 80 year olds would like to know?? We get so little information about where the “hotspot” areas are around the County we could avoid. You’d think the Health Department could furnish the FNP a list daily to publish.

EMTs got me to the hospital in September when I fell down the stairs. YEAH they should be first, they don't get to ask what you're asking. Without young folks, there are no old folks to read lists.

????I wasn’t talking about getting vaccinated, where did I say that?? I was talking about knowing where COVID-19 is worst around the County so we could avoid these areas. My Walmart? Downtown? Woodsboro or Jefferson or some other town???? Restaurants? Fairground Events? What are you talking about D?

Phy, that level of granularity is not practical. With the level of mobility in FredCo, and the lag time between infection and diagnosis (it could be weeks) and by then that "hotspot" is old news. If you are fearful, stay inside, away from others. If you must go outside for true necessities, follow the four rules 1) stay away from crowded areas, 2) stay at least 6 feet from others, 3) wash your hands frequently, and 4) wear a mask. There are no mulligans with CoViD-19. One slip-up could be enough to get you infected, as we continually see throughout the US as people become complacent (that human nature thing).