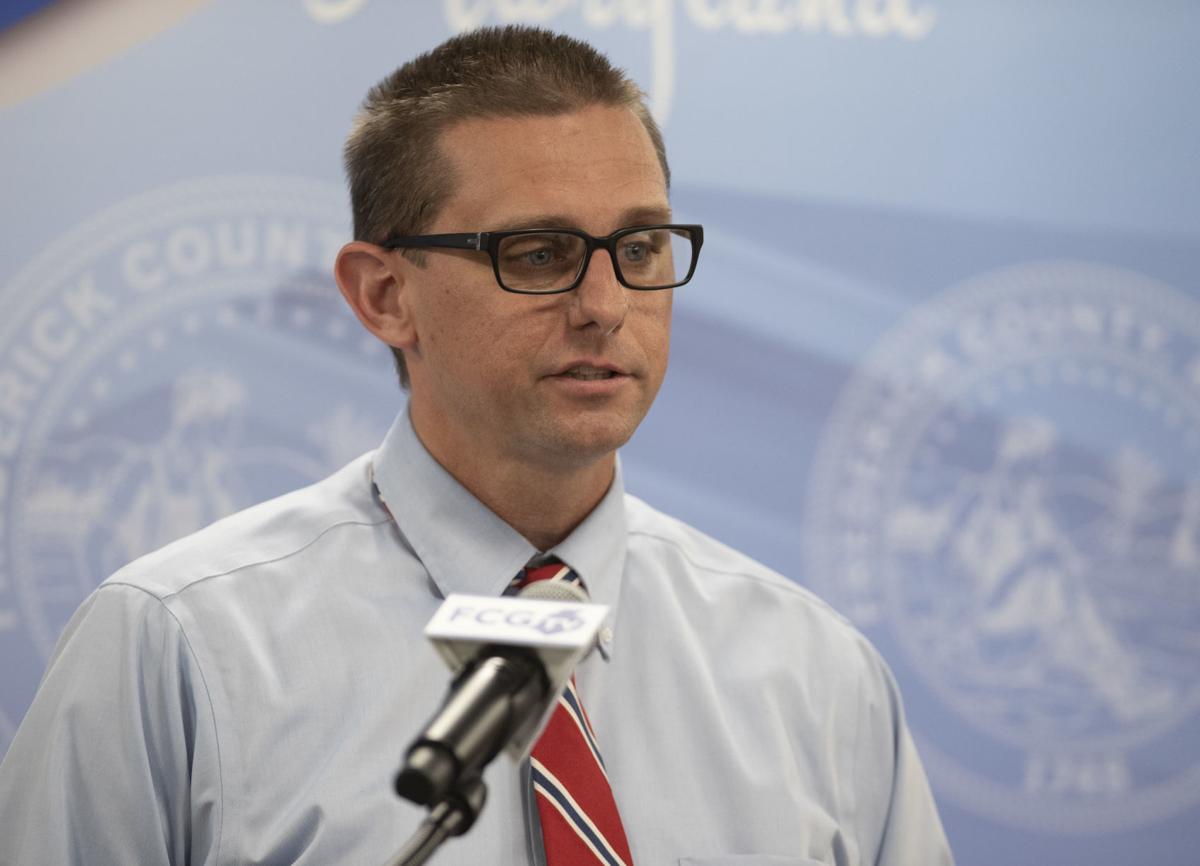 Those businesses and others can open at 50 percent capacity at 5 p.m. Friday as part of the second phase of Hogan's Roadmap to Recovery — along with following other health and safety guidelines from the governor's office, including face coverings and social distancing.

County parks will slowly start to reopen after shutting down most services during the coronavirus pandemic.

Jeremy Kortright, director of the county's Parks and Recreation Division said during a news briefing that county officials will accept reservations for park shelters and sports fields beginning July 1.

More information about summer activities and recreation will be announced next month, according to a news release. Kortright said the Catoctin Creek Nature Center will open with a modified schedule on July 18, and all visitors in that building's lobby will be required to wear face coverings and social distance.

"I'm really trying to discourage the large events ... we're not going to have any of them in our parks this summer," Gardner said. "And generally speaking, I think that's going to be true across the county."

Hospitalizations have dropped 70 percent due to the virus since May 8, county officials said in a news release. The intensive care population due to the virus has fallen 93 percent, and acute care bed use has dropped 65 percent.

Ten new positive cases of COVID-19 were reported on Tuesday, and one death was reported, bringing the county's death toll to 108.

Thirty-four deaths were reported statewide on Tuesday, in addition to 344 new COVID-19 cases. That is on par with the increase of 331 cases from the day prior.

As of Tuesday morning, Gardner said there was one person in an ICU unit as a COVID patient. The county's positivity rate has also continued to drop, Gardner said.

Frederick County and Maryland reported positivity rates of 6.3 and 6.2 percent, respectively. By comparison, the positivity rate on May 16 was 14.87 percent.

"I still do want to express caution as we move forward," Gardner said. "We've certainly seen that re-openings have created an increase in cases and hospitalizations in some other states. ... The last thing we want to have happen is for us to take a step backwards."

Gardner has said several times that Hogan's Roadmap to Recovery has stop signs in case there are spikes in hospitalizations, ICU beds, or other important data points related to the coronavirus, as more businesses and services begin to reopen.

Large gatherings are still discouraged, Gardner said, as they are one of the leading risks for spreading the coronavirus. People need to continue to wear face coverings and social distance, she added.

It's important for counties and the state to move "in unison" if businesses need to be shut down again because of spikes or a second wave of the coronavirus, Gardner said. Shutting down larger gatherings and events — once they are allowed again — would be the first step she would take to curb the spread countywide, if that happens.

"Certainly, we're trying to find a balance ... to protect public health, but also to support our economic health and our mental health," Gardner said. "And so, that is part of what weighs into all of these decisions."

"It is really going to be up to all of us, and taking personal responsibility and personal actions ... We need to be doing that until we find a vaccination or another effective treatment for the coronavirus," Gardner said.

Hogan announced a new large testing facility at the Baltimore Convention Center, which will be open on Wednesday and Friday. Meanwhile, he encouraged people to utilize the more than 150 testing sites across the state if they have attended a large gathering or may have been exposed.

Residents do not need to exhibit symptoms or meet certain criteria in order to be tested. Most testing centers require an appointment in advance, however. Drive-thru testing is available in Frederick at the Walmart on Guilford Drive, and the CVS pharmacies at Liberty Road and West Patrick Street.

Other medical clinics are also providing the tests. Are all tests are free.

Happy Monday, Bosco and Greg F. I think the three of us need a radio show. We can call it, "Says Who?" lol. Looking forward to more banter. Leaving for FL tomorrow for a week. Greg F. -- I shouldn't go, right? What does Bosco think? The county I am going to does not have face mask requirement. Yay -- But I will wear it anyhoo. Wearing a face mask in 90+ weather must be smothering. ugh.

Greg F. Try not to call names like "blind" and "utterly irresponsible" And maybe even try to stop commenting on everyone's right to comment -- even though you may disagree with their opinion.

Daisy6099, Doctor Fed Up Greg F doesn't agree with anyone or anything. [ninja]

Getting your twocents in there, I see.

No, it's not threecents. It's just a string of his nom de plumes. He was "Fed Up" when he called a racist for not wanting a bicycle made in China, then he was Doctor Von Wier when he wanted to argue about the Covid-19, and most recently GregF. [ninja]

Apt attributes to someone who doesn't want to wear B's "face coverings" who doesn't realize that verbiage is pretty much synonymous with mask these days. The Lone Ranger didn't wear a face covering...though...that's what it did. Bandit's wear masks, which are often bandannas...or...gee..face coverings. B needs to dwell on things that he calls out others for too.

Or, as I had to tell Gabbs on Monday - it really is possible that one can read a post / comment that they don’t agree with and keep scrolling.

The endless bickering he one upping is nothing but others exclaiming their sheer intelligence, and making sure everyone knows just how smart they are. It makes them feel accomplished by putting others down and putting their intelligence on display to everyone on the web.

I mostly see Gabe correcting factual errors. Which I appreciate. I usually thank people for pointing out my mistakes. That seems far more sensible than complaining about it.

we need the department of aging on Taney avenue to reopen.

Would get to phase 3 a lot faster if people would wear there bloody masks or wear properly and keep their proper distancing. Most teens I see are blissfully ignorant and not following things at all.

Some adults as well.

Unless blind and utterly irresponsible like you seem to be, you would notice almost everywhere you go....people just can’t do anything right. A facial covering is a mask...you would call a masked bandit a face-covering bandit if it were your choice. Being facecious is your game.

Once again, Doctor Fed Up GregF, you show the world what a sad existence you must lead, worrying about people who don't fit your view of the world. When you can offer nothing constructive, you apparently feel the need to resort to name calling and attempts at denigration.

What have you done today to make the world a better place?

And I'm still not buying a bicycle made in China. [lol][lol][lol]

I'm fairly certain I go out more than you (because if I don't, you would be breaking the minimal outing criteria you constantly espouse here) and I see face coverings on people 99% of the time indoors. Outdoors they are not required unless you can't socially distance a min. of 6 feet. The fact MD has flattened the curve so much proves people can do the right thing, at least here locally. There are still many things I'm not personally comfortable doing yet, but that's changing by the week due to our collective contribution.

Vodalone, That is good to hear because I still see some people with their masks under their noses or no mask at all.

Again...Boxcar...you have done your share of all of it and are one of the biggest agitators on here who can't resist to twist someone's words also...and it's your little racist trumpette loving world that's the sadder one....and nobody asked you to buy a bike from anywhere.

bosco, are you retired? You spend all day every day commenting on the FNP Opinion Forum, a lot more time than Greg spends on Mask Patrol. Do you ever go outside?? Who here do you think wears a face covering outside, or when they’re not in a place where they are required?? So you do what every responsible person here does, wear a face covering where it is required. Why are you beating the mask thing to death every day?? A sad existence is hanging out here all day long every day. Saying the same freakin’ thing. BTW, do you know who owns Corona beer?

Why does that bother you so much, Fido? I see you on here a lot and on multiple threads too. Probably all day every day too. I have been practicing safer at home unless I feel like a ride or a drive. I have a much right here as you and your tag team. Get over yourself. It's not your forum and you are more than welcome to ignore anything I post. Sheesh. Cancel culture in action. [sneaky][ninja]