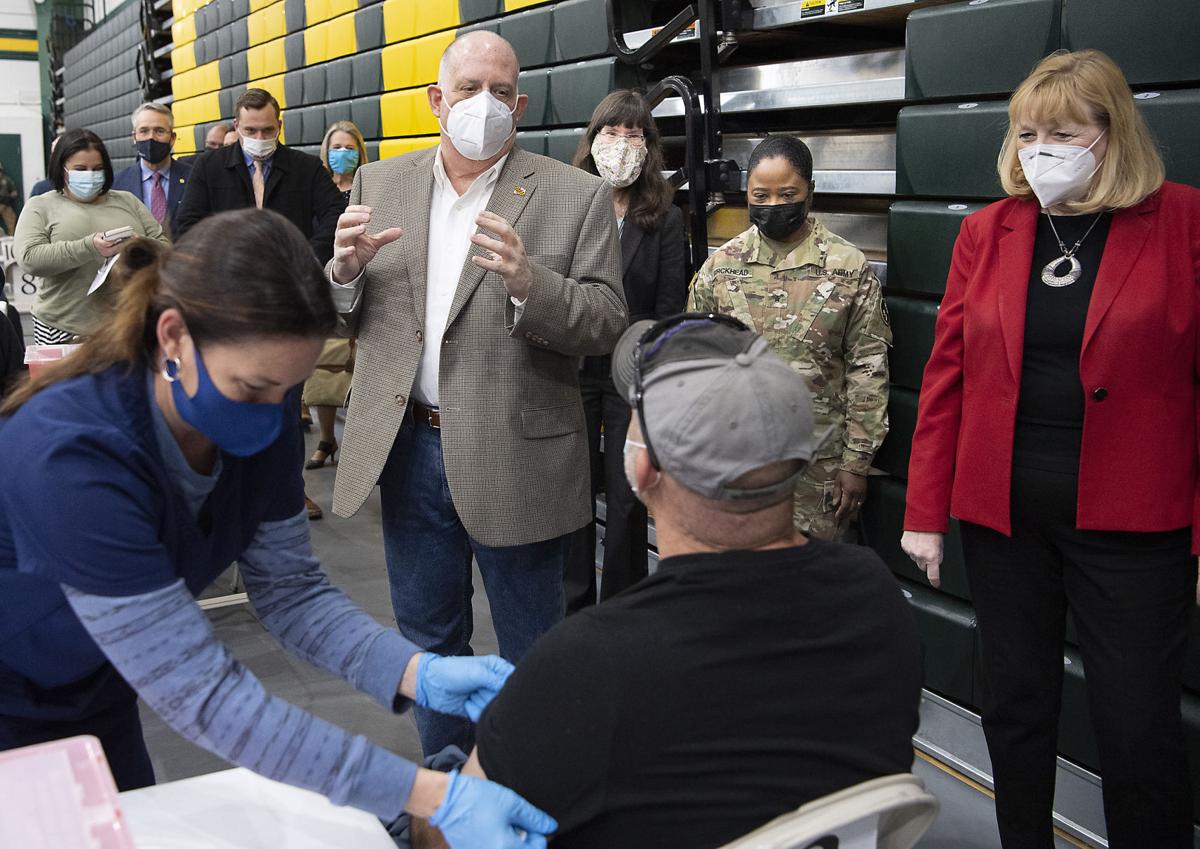 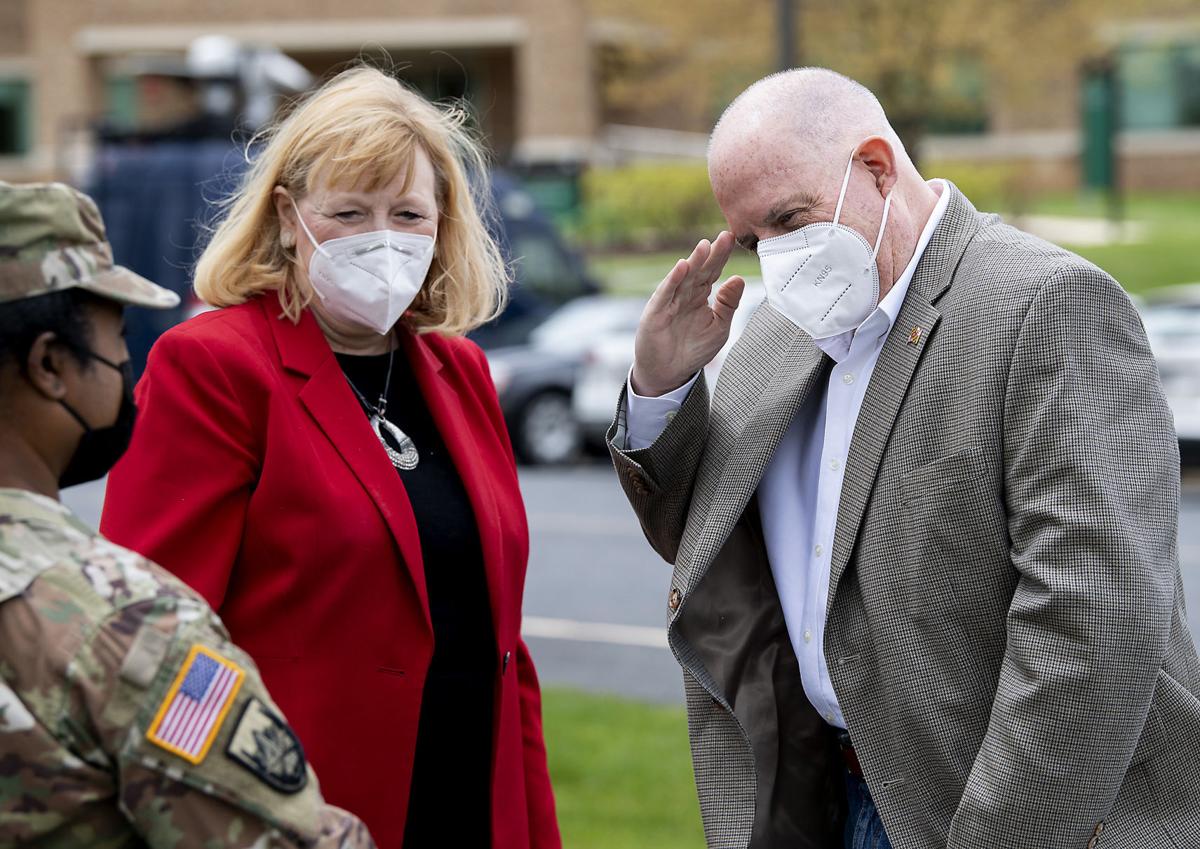 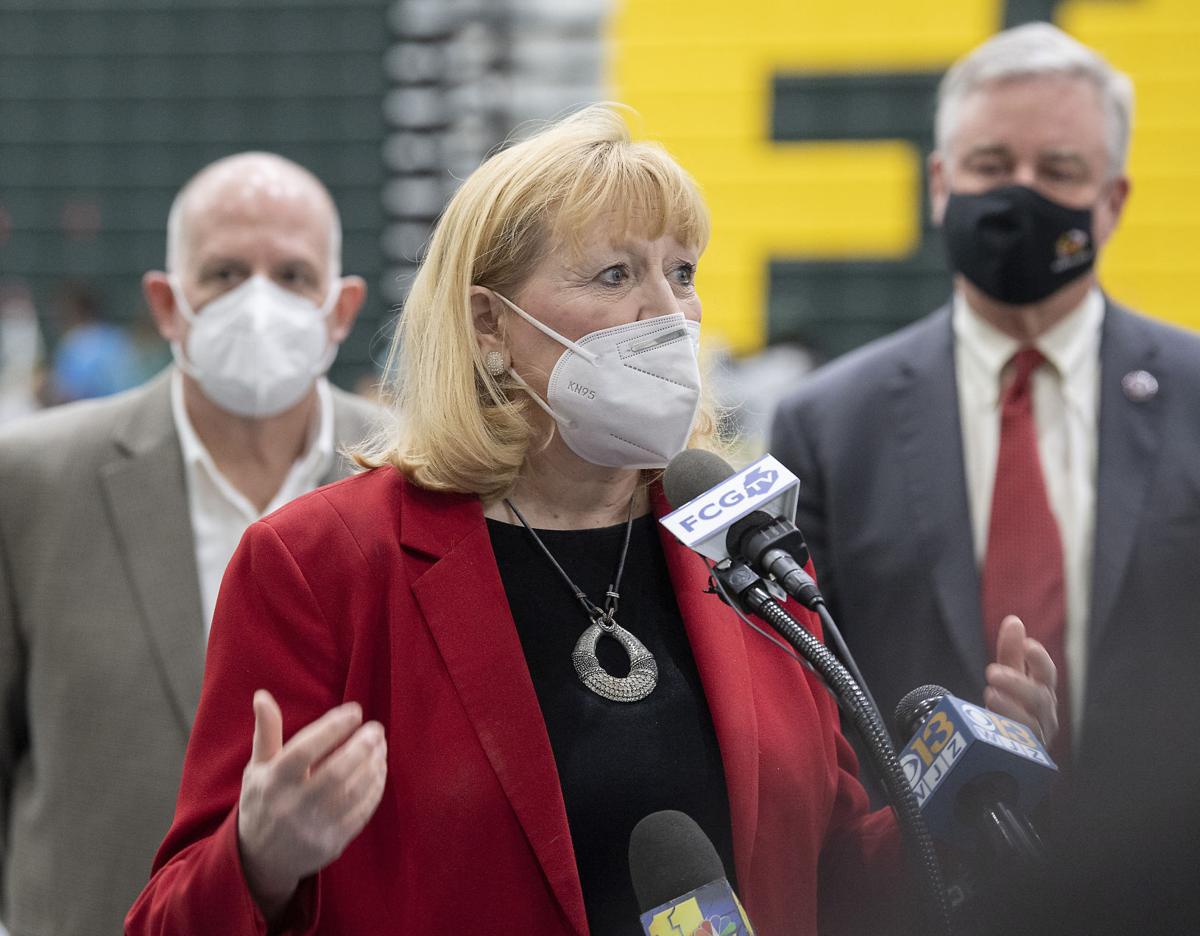 Just before 1 p.m. Thursday, an unexpected guest plopped down into the chair at Colleen Hurdle's vaccination station.

It was Gov. Larry Hogan, who was touring the state-supported COVID-19 mass vaccination site at Frederick Community College.

"I was definitely not expecting that," Hurdle, a Brunswick resident, said of the up-close time with the governor. "It made me blush a little bit."

With an entourage of aides and state and local officials looking on, Hurdle motioned to give the governor a pretend shot. Hogan played along for a moment without rolling up the sleeve of his light brown sports coat before stopping her.

Hogan's visit to FCC came a little more than a week after the site joined Maryland's growing list of mass vaccination sites, which will soon grow to 13 next week with the opening of one at the mall in Columbia in Howard County.

The FCC site is state-supported, not state-run, which means thousands of more doses of vaccine per week and some additional logistical support provided to the Frederick County Health Department. It still operates by appointment only.

On Thursday, it was a hub of activity, as 2,100 people were scheduled to get shots there, according to Heidi Keeney, the county's vaccine project manager. Another 2,400 shots are scheduled for Friday.

It's a sign that demand for the vaccine in Frederick County remains high, even as Hogan and other elected leaders are warning that a tipping point is coming in the vaccination campaign when supply for the vaccine will soon outstrip demand.

Keeney acknowledged they will soon have to get creative in order to convince people to get their vaccine and some changes to the current approach will be necessary.

"Two weeks from now, [the vaccination effort] could be entirely different," she said. "All of a sudden, [the hesitancy] is here."

Hogan elbow bumped his way through the holding area as opposed to shaking hands with people who were being monitored for a brief period after getting their vaccine.

Among those he stopped to chat and pose for a picture with was Point of Rocks resident Aleah Ireland, who was, fittingly, wearing a mask that bore one of Hogan's renowned phrases during the pandemic, "Wear the Damn Mask!"

Like many who were there to get vaccinated and unassumingly going about their business, Ireland was surprised to find herself suddenly engaged in a brief conversation with the governor.

Some people thought her mask meant that she was in the know and were asking her questions about Hogan's appearance. But she was as surprised as anyone to see him.

"I have a picture and a story to tell," Ireland said before departing the holding area. "My 15 minutes of fame, I guess."

Hogan's tour of the facility lasted a little more than an hour. He thanked many people for their service in making the vaccination site at FCC a success.

At one point, he stopped and facetiously asked Crystal Vignali, who was preparing vaccines to be administered, if she could squeeze a couple of extra doses into each vile. She regrettably told him that she couldn't.

"That was pretty cool," Vignali said of the encounter.

"This really is another example of a terrific partnership with federal, state and local governments working together with the private sector," Hogan said in closing remarks to the assembled media near the end of his tour. "We are making incredible progress on our vaccines. All of our health metrics are looking great as a result ... It's thanks to all of these folks doing a wonderful job and working together."

About 30% of Marylanders and the rest of the country are fully vaccinated, and the vaccines are working, yet the number of hospitalizations has not been going down, so imagine how bad things would be if not for the vaccines.

The CDC chart shows a steady decline in deaths since the vaccines started. At this rate, it will hard for the politicians to continue emergency measures. We should celebrate July 4th by burning our masks and getting back to living.

This will only happen if we get the majority of people vaccinated. Are you vaccinated? I don't understand why some people are reluctant.

Yep, FrederickFan. Got the Moderna back in mid January. I'm pro vaccine for anything and have had just about every vaccine known to man due to international travel for many years.

I have little sympathy for people who would rather take their chances with the disease.

Something I don't understand is that according to the vaccination numbers posted daily in the FNP, there are still over 200 people per day getting vaccinated in MD with the J&J vaccine, even though that vaccine is "on pause" by the FDA.