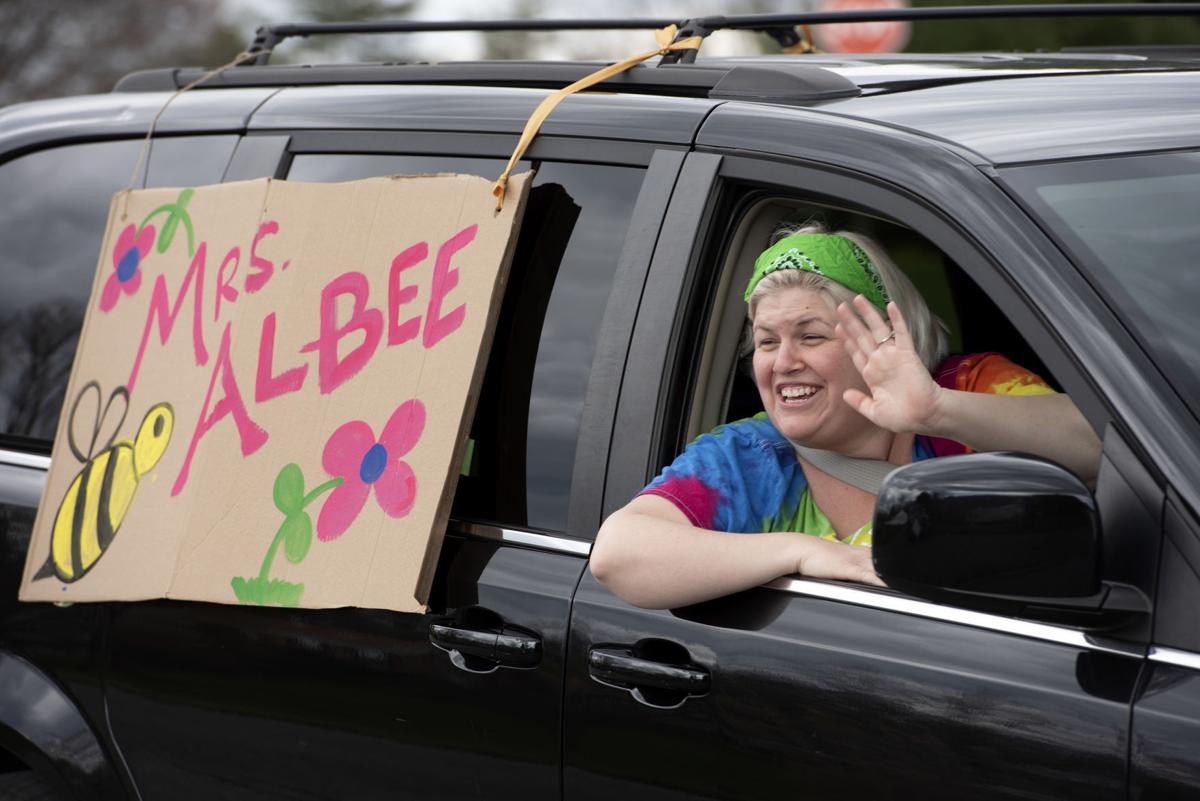 Kelley Albee, a media specialist at Green Valley Elementary School, greets students from her car as a parade of vehicles make its way through neighborhoods to let students know their teachers miss them. 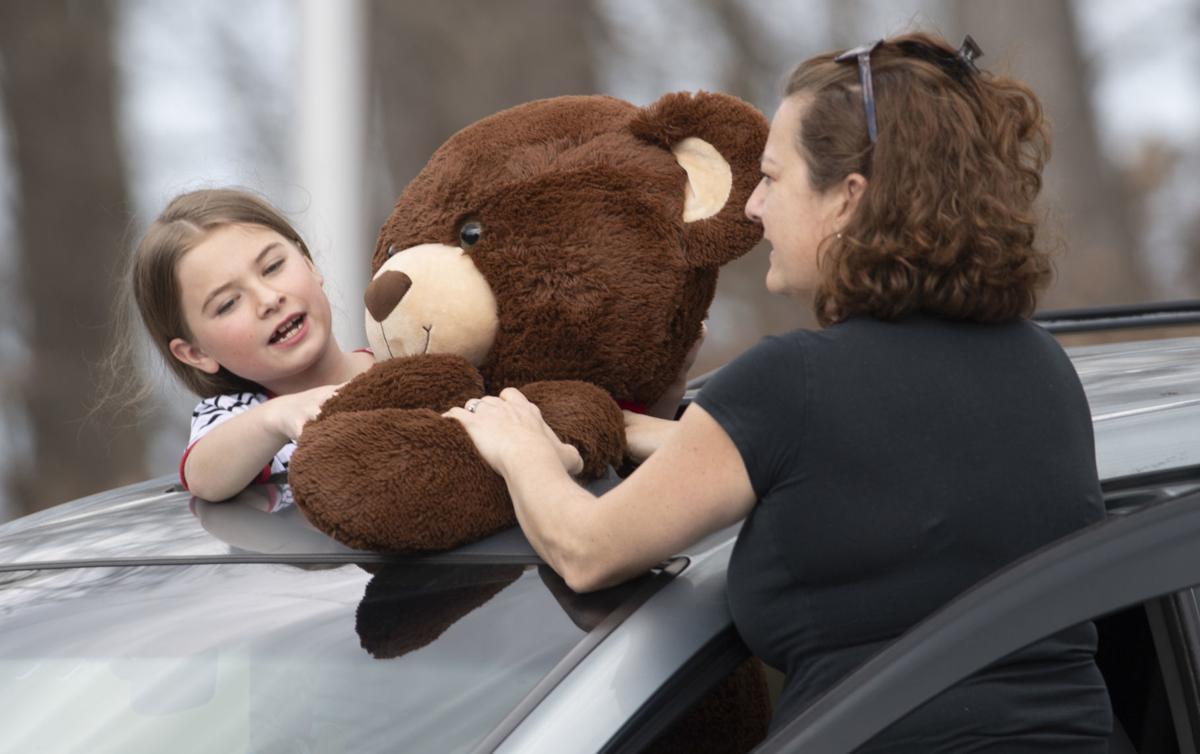 Kindergarten teacher Melanie Preston and her 8-year-old daughter Camdyn secure a stuffed bear in the sunroof of their vehicle prior to a parade of Green Valley Elementary School staff through area neighborhoods. 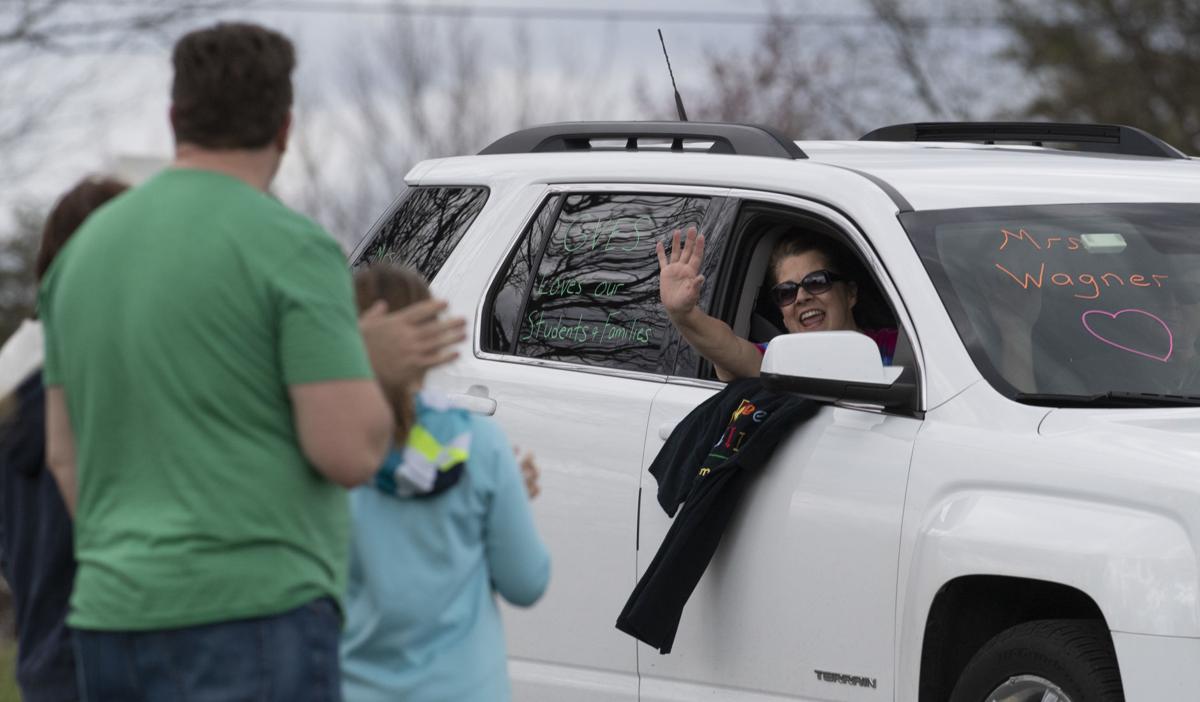 Kathleen Wagner, an administrative secretary at Green Valley Elementary School, waves to a family during a parade of school staff through area neighborhoods Monday.

Kelley Albee, a media specialist at Green Valley Elementary School, greets students from her car as a parade of vehicles make its way through neighborhoods to let students know their teachers miss them.

Kindergarten teacher Melanie Preston and her 8-year-old daughter Camdyn secure a stuffed bear in the sunroof of their vehicle prior to a parade of Green Valley Elementary School staff through area neighborhoods.

Kathleen Wagner, an administrative secretary at Green Valley Elementary School, waves to a family during a parade of school staff through area neighborhoods Monday.

Jaeger, a special education instructional assistant, was the first staff member there. But no more than 15 minutes later, dozens of teachers and staff had joined her, writing their names on their cars with markers, attaching signs and showing other visual displays of appreciation for the school’s students.

Those teachers and staff members held a parade in some nearby neighborhoods to show their appreciation for students, hours after Gov. Larry Hogan announced a stay-at-home directive, beginning at 8 p.m. Monday. The state’s public schools have been closed since March 16, and will remain closed through at least April 24.

Signs of the times: At Middletown parade, teachers, students support one another — from a distance

“It’s just showing a sense of community ... and making sure we let the kids know that we miss them,” Jaeger said.

Shortly before the parade began at 3 p.m., dozens of cars and a Green Valley fire truck lined up on the main entrance road and curve leading up to the school’s entrance.

Marie Wiehler, a first-grade teacher at Green Valley, was one of the parade’s participants. She’s in her 13th year at the school, and like Jaeger, said it was important for teachers and staff to show they care about the students.

Monday also marked the first day of distance learning for many teachers statewide, as they shift to an online model for students.

Wiehler and other teachers said one of the main glitches was Schoology, a virtual learning platform the district uses, not working at some points Monday. That platform keeps assignments and lessons in one place for teachers and parents.

Parents have been supportive, though, Wiehler said — due to these events being unprecedented and teachers learning on the fly. One of the challenges going forward will be losing that sense of personal interaction with young kids in the classroom, she said.

“How do you let a 6-year-old know how they’re doing?” she said. “You’re always reviewing things, and talking things through with them, and answering their questions one-on-one.”

During the parade, Amber Ralli and her daughter Sophia, a first-grader at the school, waved to to the fire truck and line of cars along Chaucer Court and Shakespeare Way.

“It’s good to stay connected to them, and see faces in front of them instead of through the computer,” Ralli said.

Ralli and other parents said there are some “glitches” with virtual learning versus a classroom setting, but they are being patient as school officials roll out those changes.

That included Sarah Shick, mother of Hunter and Wyatt, a first-grader and pre-schooler, respectively.

The parade was a great opportunity for them to get out of the house and see their teachers for the first time in weeks, Shick said. She also said there were some glitches with online learning, but added it’s important to be patient in the days and weeks ahead.

“For subjects and concepts that have been taught previously, it’s OK,” Shick said from the trunk of her car in a parking lot off Greenridge Drive. “The bigger challenge is when they expect the household to help teach new concepts.”

Lainey Keimig, an art teacher at Green Valley, said some of her lesson plans include having students build things with common household items. She and her colleagues set up a Google site for assignments and other components.

Keimig said communication with parents and students could be a challenge for many during the next couple of weeks, especially as it relates to specific objectives or those with larger groups of students.

“I think the feedback piece is going to be tricky for those with hundreds of kids,” she said as she finished decorative touches to her car before Monday’s parade, which included a bundle of pom poms.

But at least for Monday afternoon, a major priority for many parents and staff was connecting students with their teachers and other leaders at Green Valley.

“There are so many children that are feeling isolated,” said Kathleen Wagner, the school’s secretary. “We just want to show them that we care ... and that Green Valley is a very tight-knit community.”

Do these teachers have the same kind of parade when the students are on summer break?

I have to agree with you, the entire daily parade stuff, is out of control, we have a stay at home order in place, their parades are not essential. the police need to start enforcing it.

STAY AT HOME! how hard is this for people to understand? Stop these stupid parades, they do nothing to help.